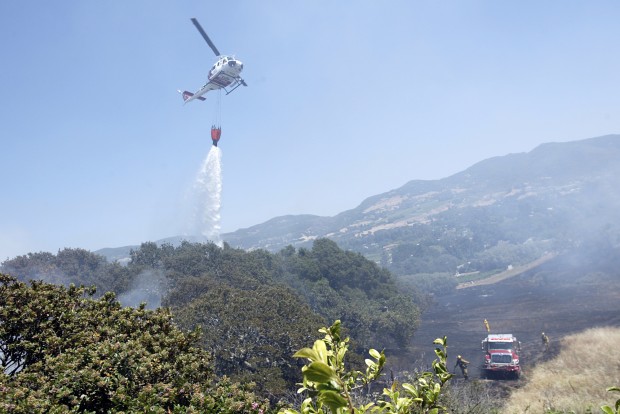 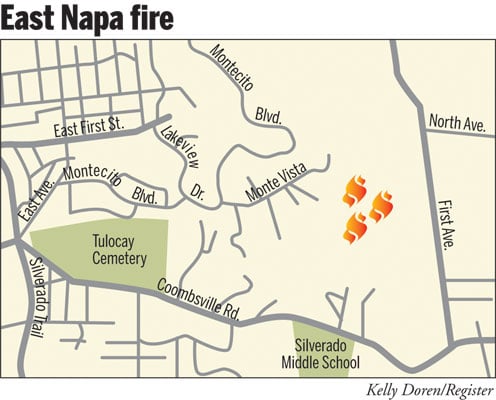 Using air support and an army of ground forces, firefighters jumped on a fast-moving grass fire Tuesday afternoon that threatened homes in Coombsville and the top of Alta Heights.

The blaze, which started before 2 p.m., burned 31 acres, but no structures before it was contained about an hour later, said Barry Biermann, a battalion chief with the Napa County Fire Department/CalFire. CalFire does not have a cause for the vegetation fire, which was fanned by moderate winds, CalFire said.

“It definitely was a dangerous fire,” Biermann said.

The defensible space created homeowners in the area helped stopped the fire, said Biermann, referring to the 100-foot vegetation clearance homeowners are required to have around their homes.

Smoke shrouded the eastern hills during the mid-afternoon blaze, creating anxiety in the minds of thousands of city onlookers that a conflagration was in the works.

CalFire, with support from the Napa Fire Department and the county fire department, engaged in a furious hour of firefighting on both sides of the ridge line that defines eastern Napa.

Knowing that the wooded homes at the crest of Alta Heights are vulnerable in a wildland fire, fire agencies dispatched a full array of resources, including 75 firefighters, two air tankers, a helicopter dropping water, a dozen or more engines. Among the firefighters were two inmate crews, Biermann said.

Fearing the blaze would burn over the ridgeline and into the city, Napa police for a time urged residents on Monte Vista Avenue to evacuate. But no one was evacuated, Biermann said. The Napa Fire Department stationed engines at the driveways of the most threatened homes.

Rich Hancock, who lives at the top of Monte Vista, said he was in Fairfield when his phone lit up with some two dozen calls from people saying his home was in danger.

When he got home shortly after 3 p.m., Napa firefighters had saved his house. Flames had come within a few feet of a storage garage, Hancock said.

Marie Henderson, wife of ex-mayor Ed Henderson, briefly evacuated her home, taking her medicines with her, then later returned when the threat lessened.

John Hartley was working on his mom’s house west of First Avenue, when he heard a bunch of kids on motorcycle. Wondering what was going on, he looked outside and saw all the smoke. The fire was moving very rapidly, he said, a few hundred feet from a charred grass.

Napa County Board of Supervisor Chairman Keith Caldwell, a former fire chief in American Canyon, said he was in a meeting at the Office of Emergency Services, when the fire was reported. He rushed to the scene with a staff member. As they drove, the car got dropped with fire retardant, he said, as he watched the scene.

First Avenue was closed to traffic for several hours, prompting dozens of vehicles and their occupants to gather by the barricades at North Avenue and Coombsville Road.

The fire burned within several hundred feet of homes on the west side of First Avenue, but the residences were saved. Flames crept up to the edge of a Coombsville vineyard, but firefighters turned them back.

No injuries were reported.

John Hinckley to be released from oversight

John Hinckley to be released from oversight

Watch Now: Phone apps that help you during natural disasters

Watch Now: Phone apps that help you during natural disasters

Grass mower’s blade was likely cause of Coombsville fire

A fire that scorched 31 acres in the 1400 block of Coombsville Road on Tuesday was apparently caused by a resident who was mowing the grass, a…