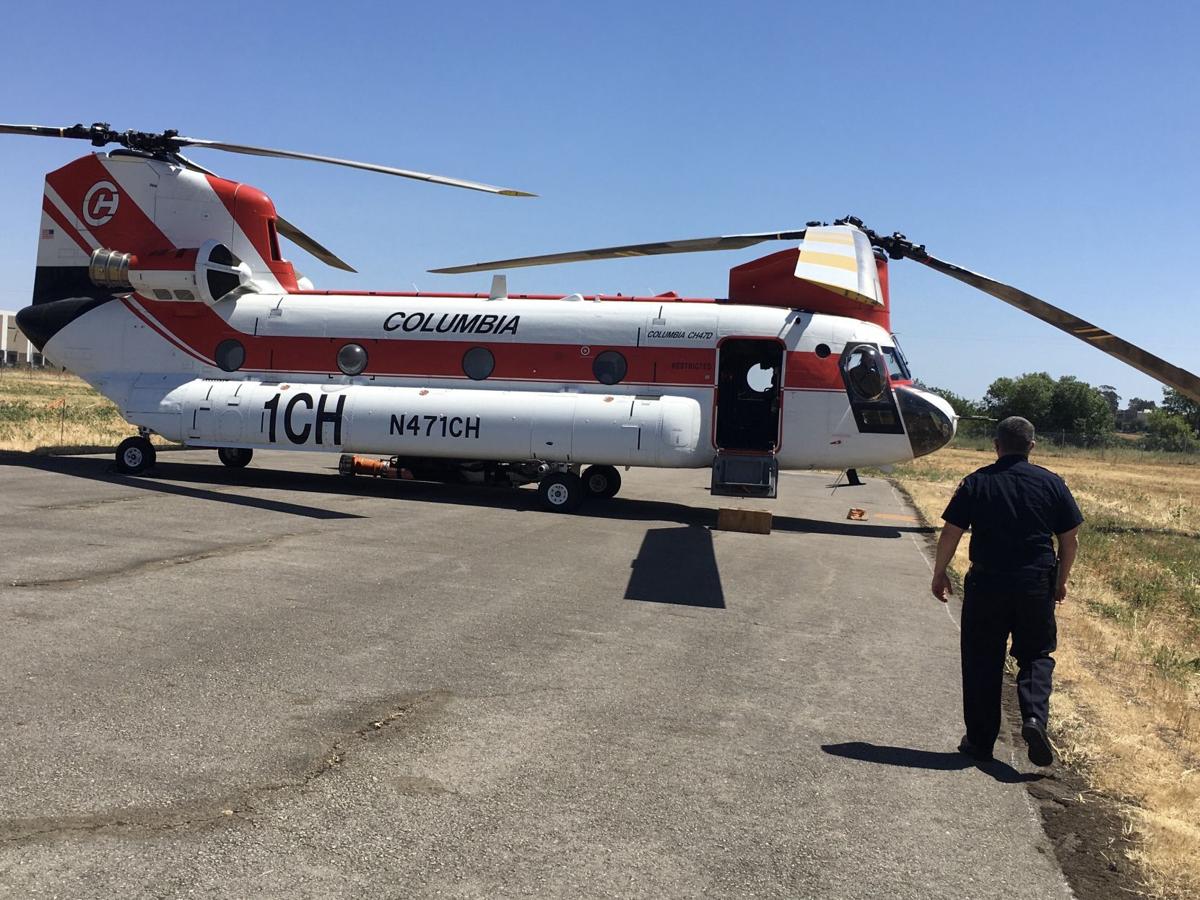 Cal Fire has based a Boeing Chinook helicopter that can carry up to 2,800 gallons of water at Napa County Airport for fire season. 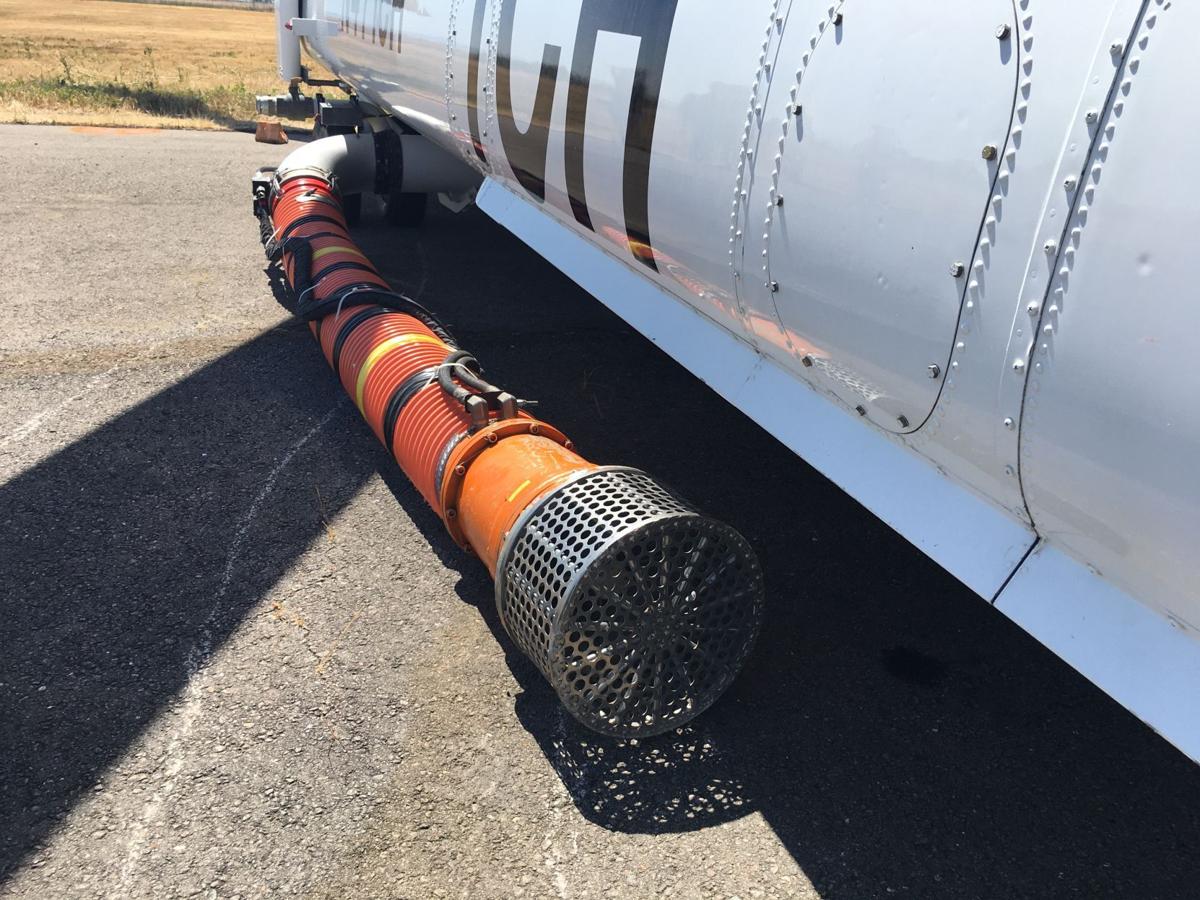 A water-dropping helicopter that Cal Fire has based at Napa County Airport takes in water from lakes, reservoirs and other sources through this hose. 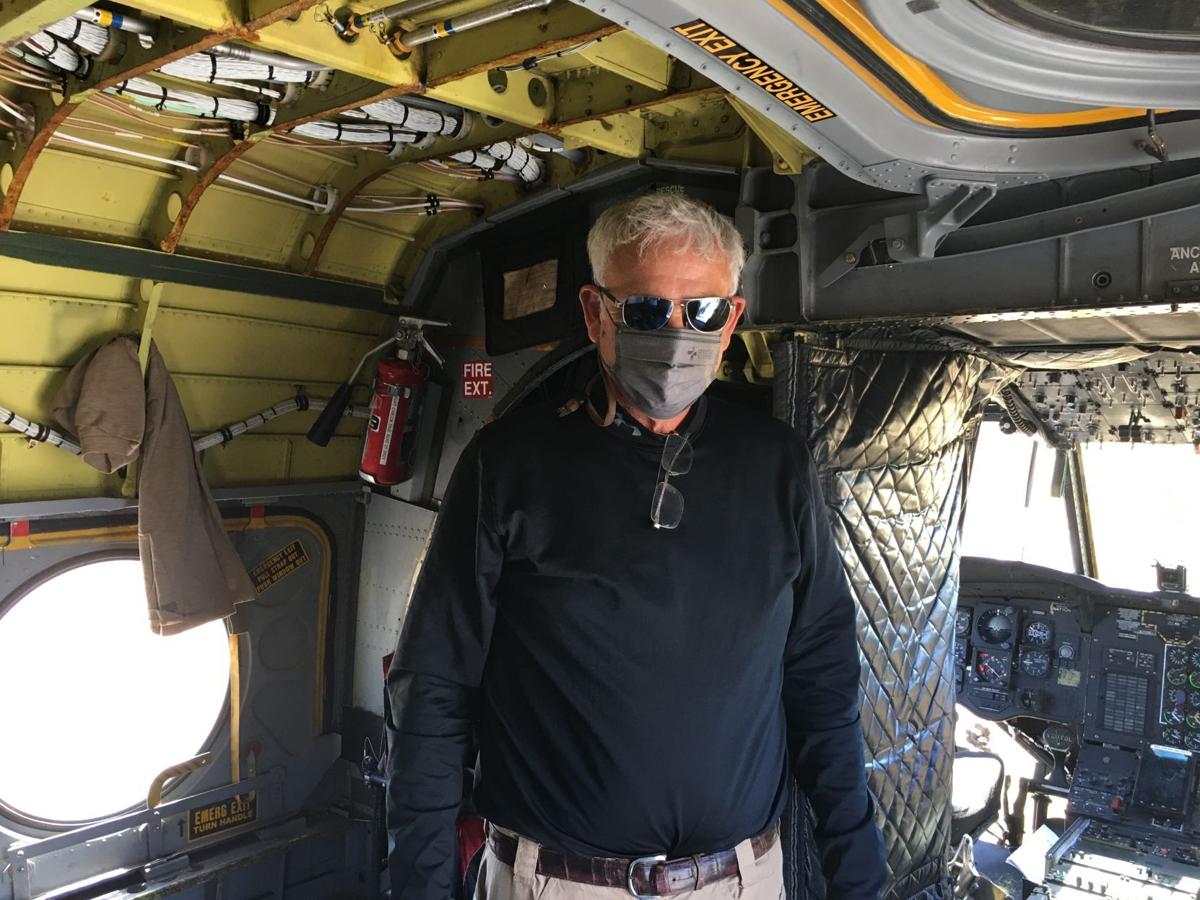 Pilot Perri Hagen of Columbia Helicopters inside the cabin of the Boeing Chinook helicopter that Cal Fire has based at Napa County Airport to help fight wildfires.

Helicopter pilot Perri Hagen could be rushing to the scene of Napa County wildfires this summer in One Charlie Hotel to drop a load of flame-quenching water.

Missions in One Charlie Hotel — a former U.S. Army Boeing Chinook helicopter retrofitted to hold water — won’t be just a drop-and-done. The aircraft can fly to reservoirs, ponds, even streams, suck more water into its tank and keep on dropping.

One Charlie Hotel can suck up 2,500 gallons a minute through a hose and hold up to 2,800 gallons. It carries less water at the beginning of a mission and more later on as the fuel weight drops.

“If you have a good water source and you’re close to the fire, you can be dropping every three minutes,” Hagen said.

And the name One Charlie Hotel? That’s not really a name at all, but rather a phonetic version of the helicopter’s tail number 1CH used to dispatch the helicopter.

Cal Fire decided to base the helicopter at Napa County Airport this fire season in the wake of last year’s massive Hennessey and Glass fires. The helicopter is owned and operated by Columbia Helicopters, Inc. under Cal Fire supervision.

One Charlie Hotel isn’t to be used exclusively in Napa County. It is part of Cal Fire’s larger aerial attack that includes 60 of its own aircraft and the ability to expand this by another 100 on-call aircrafts when needed.

“This is a statewide resource,” said Shana Jones, chief of Cal Fire’s Sonoma-Lake-Napa unit. “It is positioned here in Napa for quick response for the area for the counties that we serve.”

The One Charlie Hotel helicopter will be a “significant player” in the initial attacks on local fires, Cal Fire Capt. Nick Welch said.

Hagen flew Cobra attack helicopters for the U.S. Army. This is his 29th year fighting fires, a career that among other things saw him dumping water on the 2018 Camp Fire in Butte County.

The red-and-white helicopter is 99 feet long from rotor tip-to-tip and sits on asphalt at Napa County Airport ready to take off. Its first stop in the event of a wildfire would be a reservoir, lake or other water source to take on water.

“We could be up right at daybreak if Cal Fire wants us to,” Hagen said.

Crews fly for up to eight hours. Additional pilots can extend this to 12 hours.

"If there's that much daylight, we can do it," Hagen said.

Near the helicopter is a trailer for the crew. Shifts could involve tedious waiting or adrenaline-pumping action, depending on whether a call comes in.

“There’s been some slow years,” Hagen said. “Then there are other years where it’s nonstop.”

Preparation for the upcoming fire season has been a Napa County priority since the Glass and Hennessey fire last year destroyed about 900 structures. A second consecutive drought year has only added to the sense of urgency seen at recent county meetings.

The Napa County Board of Supervisors on April 6 agreed to spend $6.4 million on steps to try to prevent another massive, destructive wildfire. Those steps include creating fuel breaks around rural communities.

Cal Fire and the county in April turned down an offer by Growers/Vintners for Responsible Agriculture to pay $1.5 million to base two Fire Boss water-dropping planes here this fire season. The planes would have waited loaded with water to help mount an early attack on wildfires.

Among the reasons given by the county for that controversial refusal was an estimated, additional $2 million in operating and other costs to be incurred by the county. Cal Fire officials said the small planes would not be a good fit with its aerial firefighting program.

Cal Fire at about the same time announced it would base a water-dropping helicopter at Napa County Airport. It also said it will add 46 people to staff a 24-hour fire crew. The total cost for the two firefighting additions is about $3 million.

Randy Dunn of Growers/Vintners for Responsible Agriculture on Wednesday said that a local effort is still underway to bring more firefighting resources to Napa County. Details are still emerging.

"We really cannot have too many assets: too many trucks, too many helicopters, too many airplanes,” Dunn said.

As wildfires scorch more and more of California, state legislators are looking for ways to make sure rural farmers can get the insurance they need to maintain their agricultural operations.

A fuel break being created around Napa County's Circle Oaks development is the first of many planned to tame wildfires.

A helicopter capable of 1,000-gallon water dumps and 46 more firefighters will be assigned to protect the county this year, officials have announced.

The Spring Mountain Fire Safe Council has been established in a rural area outside St. Helena.

Companies show off a variety of wildfire responses, including fire-retardant gel, sprinklers and private firefighting services.

Bart O’Brien likes to take to the skies in one of his "gyrocopters," enjoying the "low and slow" rides over the Bay Area.

Supervisors should be acting in our interests

Napa County to consider getting another firefighting helicopter

Napa County supervisors on Tuesday will talk about whether the county needs another locally-based water-dropping helicopter to fight wildfires.

Napa County is spending $1.8 million to add a firefighting helicopter under the control of the county fire chief for the rest of wildfire season.

Napa County begins the search for a new fire chief as the heart of fire season approaches.

Cal Fire has based a Boeing Chinook helicopter that can carry up to 2,800 gallons of water at Napa County Airport for fire season.

A water-dropping helicopter that Cal Fire has based at Napa County Airport takes in water from lakes, reservoirs and other sources through this hose.

Pilot Perri Hagen of Columbia Helicopters inside the cabin of the Boeing Chinook helicopter that Cal Fire has based at Napa County Airport to help fight wildfires.