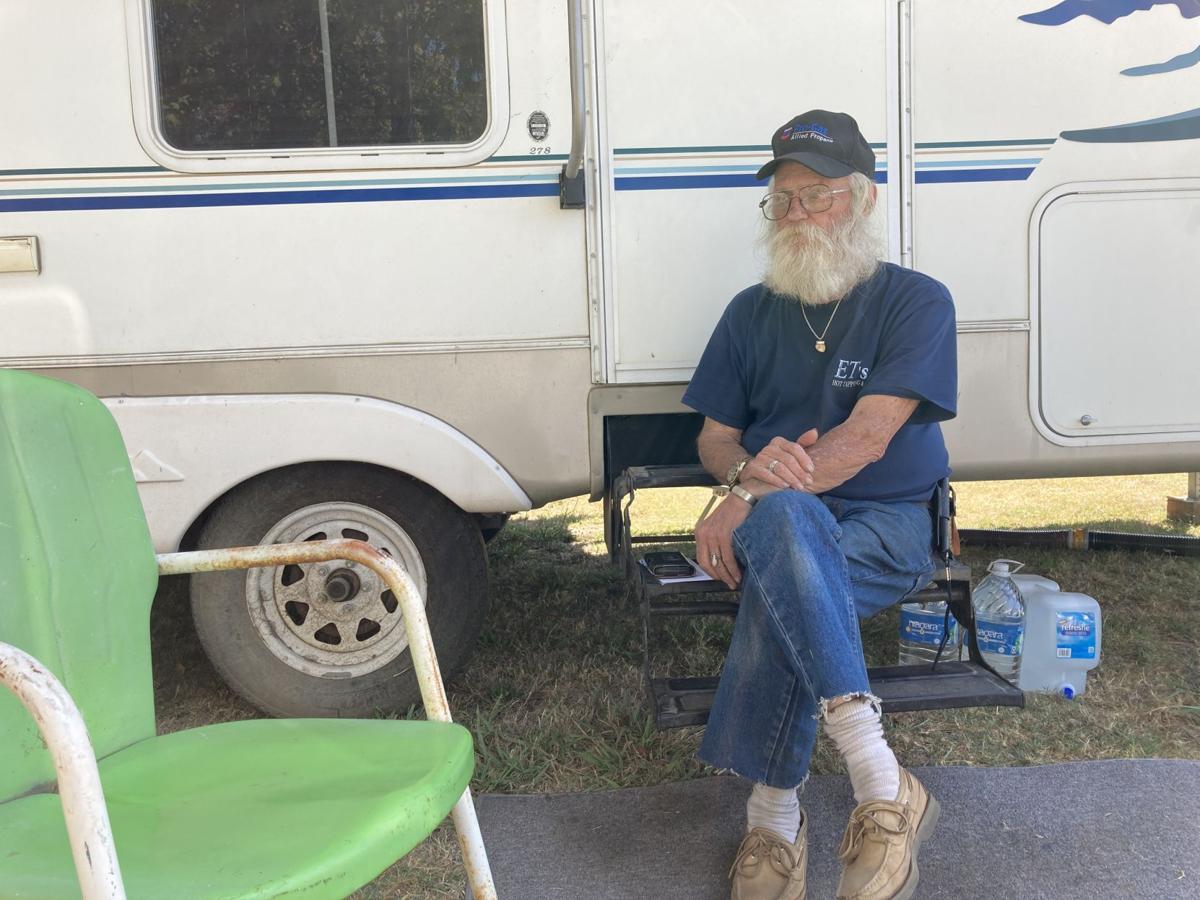 Bill Jones, Jr., a former resident of the Berryessa Highlands, sits outside his trailer parked at the Napa Valley Expo on Monday. Jones was one of a dozen or so evacuees to receive a notice to vacate the property, which was ultimately rescinded but evacuees say caused them distress. 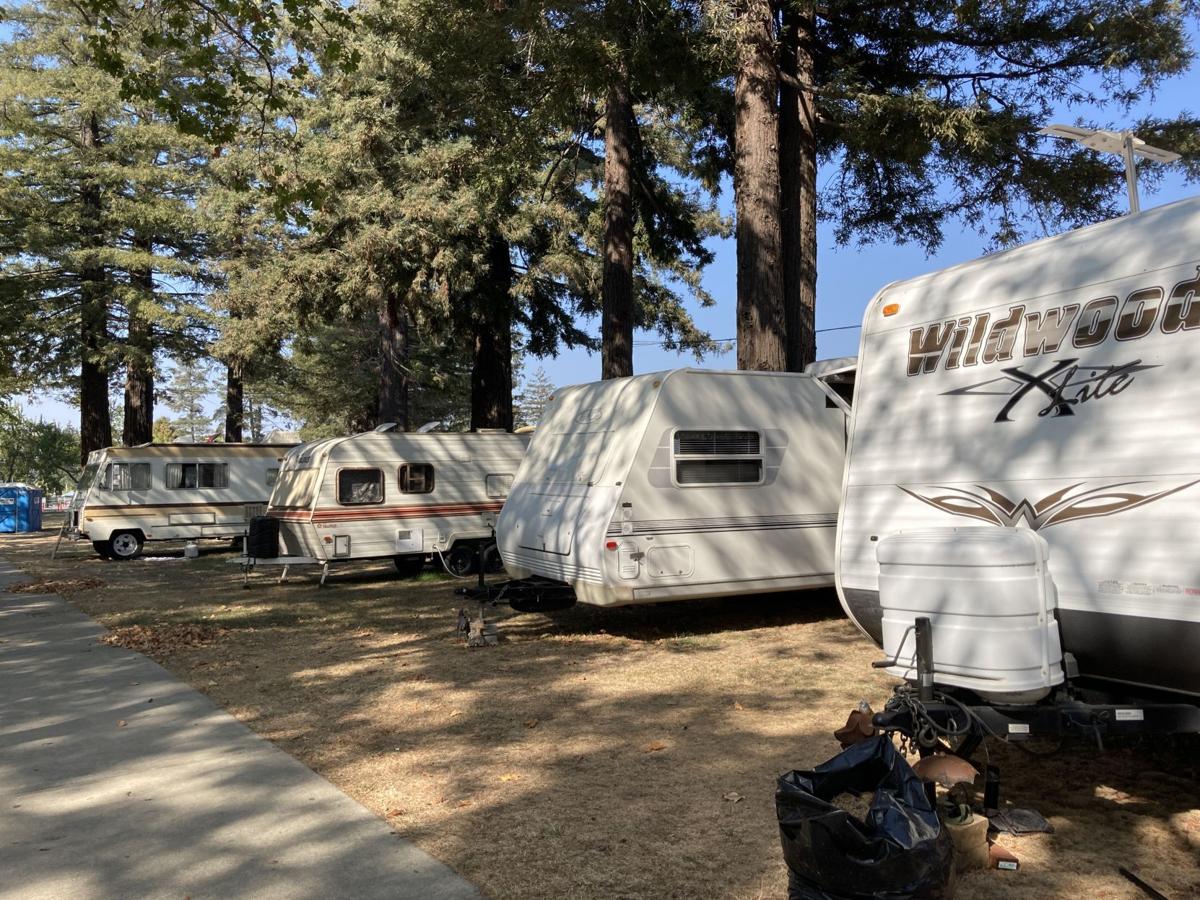 Trailers under shade at the Napa Valley Expo. Three (all but the left-most) belong to evacuees of Spanish Flats Mobile Villa, which burned almost completely to the ground during the Hennessey Fire, leaving many residents with no where to go.

More than a month after their homes were destroyed by the Hennessey Fire, a number of displaced evacuees are still asking themselves where they should go from here. In many cases, it’s a literal question. The fire ravaged homes in the Lake Berryessa area, damaging portions of Berryessa Highlands and Berryessa Estates neighborhoods and devastating the Spanish Flats Mobile Villa – a section of Napa County long seen as a bastion of more affordable housing.

Residents of the mobile home park were paying anywhere from $700 to $1,400 for one- or two-bedroom homes, while the average rent for a two bedroom apartment in Napa County is almost $2,300. Some renters even before the fires were “one step away from living in their cars,” Mobile Villas owner Rob Wolf told the Register in August.

Bill Jones, Jr. fled the Berryessa Highlands neighborhood the night of Aug. 18 with just the clothes on his back and his 14-year-old dog in tow. His rented home burned to the ground, said Jones, who did not have renters insurance on his belongings.

“I don’t have anyone to pay for anything,” Jones said. “I’m a retired naval officer, so I get a pension, but it’s going awfully fast, because I have to buy everything myself.”

Jones spent the first couple of days after the fire in limbo, living on a ranch where he works one day a week in an R.V. he’d borrowed from a friend. He heard shortly thereafter that Napa Valley Expo in Napa was allowing evacuees to park and hook up trailers at no cost; Jones arrived there in late August, five or so days after he evacuated. He’s been parked there since.

On Friday, Sept. 18, Jones awoke to find a note taped to his door.

“The Napa Valley Exposition will be closing this Emergency Evacuation site on September 21, 2020, at 12:00 Noon,” it read. “We are glad that we were able to be of assistance. Please leave your area clean and free of debris.”

The note gave no contact number nor was it signed.

Jones wasn’t the only one to have received the notice; it had been tacked to every trailer in the Expo late Thursday night. Upon finding the note, one pair of evacuees – a former manager of the Spanish Flat Mobile Villa and his wife, who asked to remain anonymous out of concern for their privacy – searched in a panic for a new place to park their trailer into the early hours of Saturday morning.

“When we got here, we asked how long we could stay – just so we could plan,” the manager’s wife said. “But they told us we could stay as long as we needed, and that we would have at least a week’s notice before we’d be asked to leave.”

The pair stayed in hotel rooms around Napa County – paid for by the American Red Cross—with their seven cats and dog for two weeks after their home in the Mobile Villas burned down, the manager said. When they had no luck finding neither an alternative site for their trailer nor a truck that could tow it there, the pair decided to stay until they were forced to leave, if it came to that.

There are at least five former residents of the park staying at the fairgrounds. An additional evacuee, who does not own a trailer, has been granted a week-long extension in a hotel paid for by the county, the pair said.

None of those residents had rental insurance, the manager’s wife said.

Ultimately, the notice of closure was rescinded; Jones found out just a few hours before noon on Monday, he said, thanks to a call from someone from the county. The Villa manager and his wife were also notified Monday, the pair confirmed, by a reporter from the San Francisco-based television station KPIX who had made inquiries on behalf of the evacuees.

On Monday, each of the evacuees interviewed for this story said they were not sure how long the extension would last.

Asked about the notice, former Napa Valley Expo CEO Joe Anderson, now a part-time consultant, said there had been a miscommunication between management and the evacuees. The notice had been rescinded a day after it was issued, Anderson said, adding the grounds had then asked evacuees to simply register with the parks’ manager. (The evacuees interviewed for this story said they had not received direct notice of the request from the manager.)

There was no hard and fast date by which the evacuees would have to leave the grounds, Anderson said.

The fairgrounds will work “in tandem” with Napa County and the state’s Office of Emergency Services to make arrangements with the evacuees on a “case by case basis,” Napa County Supervisor Alfredo Pedroza said.

On Monday, former Spanish Flats resident Rich Woodard was just hoping the extension granted would last until he was able to move into a small guest cottage he’d arranged to rent. He’d been living out of a small van for the last 10 or so days, he said. Like most of his neighbors, he’d not had insurance on his possessions in the house he’d been renting near the mobile home park in Spanish Flats.

The last month has been hard on Woodard: he lost not just his home but his mechanic’s workshop, which he ran out of his garage. Since the fire razed Spanish Flats – taking with it most of his worldly possessions, including his work tools – he’s been unable to work and is still waiting on the state to process his unemployment claim.

Supervisor Pedroza said he was “not sure why” the administration of the fairgrounds had decided to issue the notice without notifying the board of the fairgrounds, the city of Napa or Napa County. He praised them for rectifying the situation and said the county is continuing to work with uninsured evacuees to understand their options going forward. There would likely be no single solution for everyone, he added.

“We need to listen to what the needs are, then identify (solutions). Does that mean bringing in trailers? Does it mean finding housing vouchers?” he asked. “I want to be careful of us prescribing the solution until we understand the need.”

Ultimately, Woodard said, he’s just relieved to hear he wouldn’t have to leave the fairgrounds that day. Asked where he would have gone, he paused for a moment.

“I’m not really sure,” he said, quietly. “We were all just (thinking) – where are we supposed to go?”

Editor's Note: This item has been amended to correct the name of Bill Jones Jr.

Food benefits available for residents impacted by the Hennessey Fire

Benefits have not yet been extended to casualties of the more recent Glass Fire.

Displaced fire evacuees — living in RVs at the Napa Valley Expo — have until Feb. 8 to find long-term housing elsewhere because of the Expo's contractual obligations in 2021.

Bill Jones, Jr., a former resident of the Berryessa Highlands, sits outside his trailer parked at the Napa Valley Expo on Monday. Jones was one of a dozen or so evacuees to receive a notice to vacate the property, which was ultimately rescinded but evacuees say caused them distress.

Trailers under shade at the Napa Valley Expo. Three (all but the left-most) belong to evacuees of Spanish Flats Mobile Villa, which burned almost completely to the ground during the Hennessey Fire, leaving many residents with no where to go.