Become a Member
Read Today's E-edition
Share This
For some Napa Valley wineries, virtual tastings will persist beyond the pandemic
Share this
1 of 3 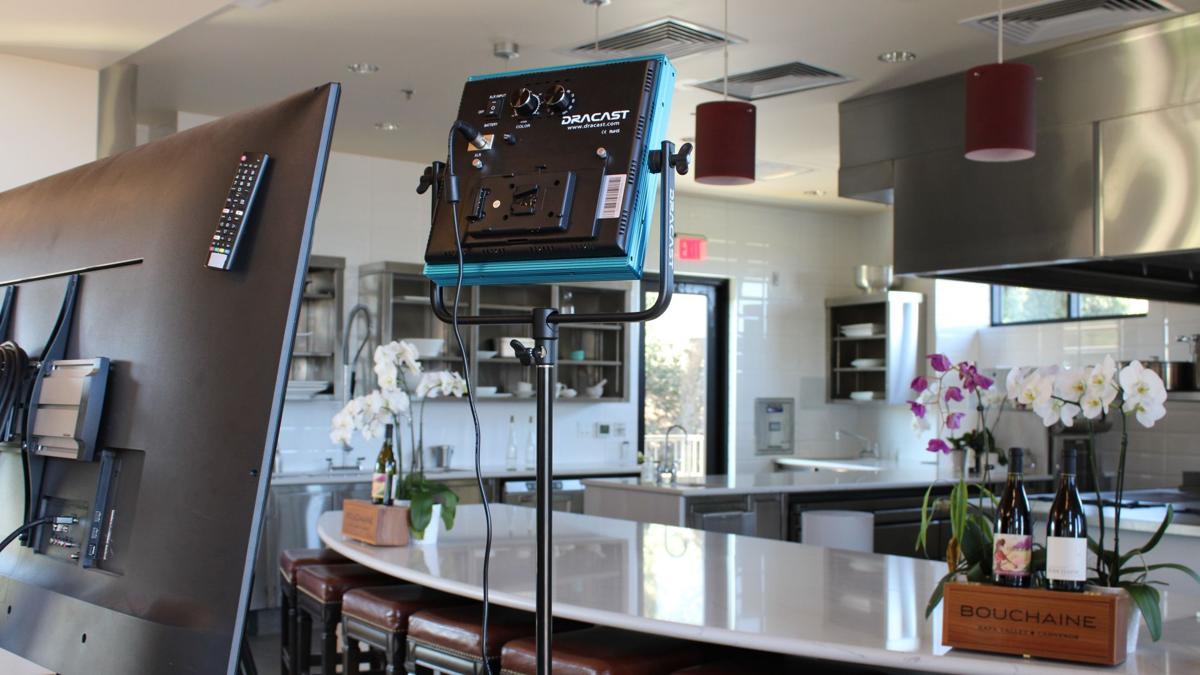 The Bouchaine Vineyards virtual tasting set up is capable of switching between the kitchen, the vineyards, the patio and other meeting spaces with a click of a button. 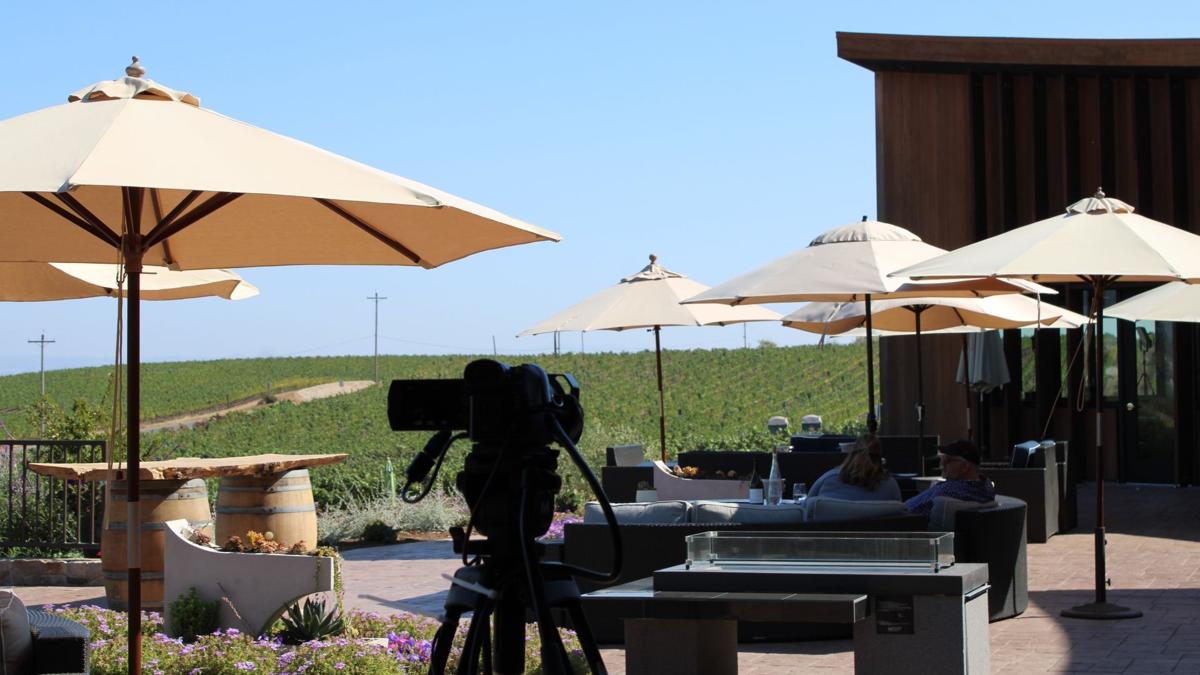 In addition to indoor cameras and the demonstration kitchen, Bouchaine Vineyards also sets up cameras out on the patio and sometimes even in the vineyard. 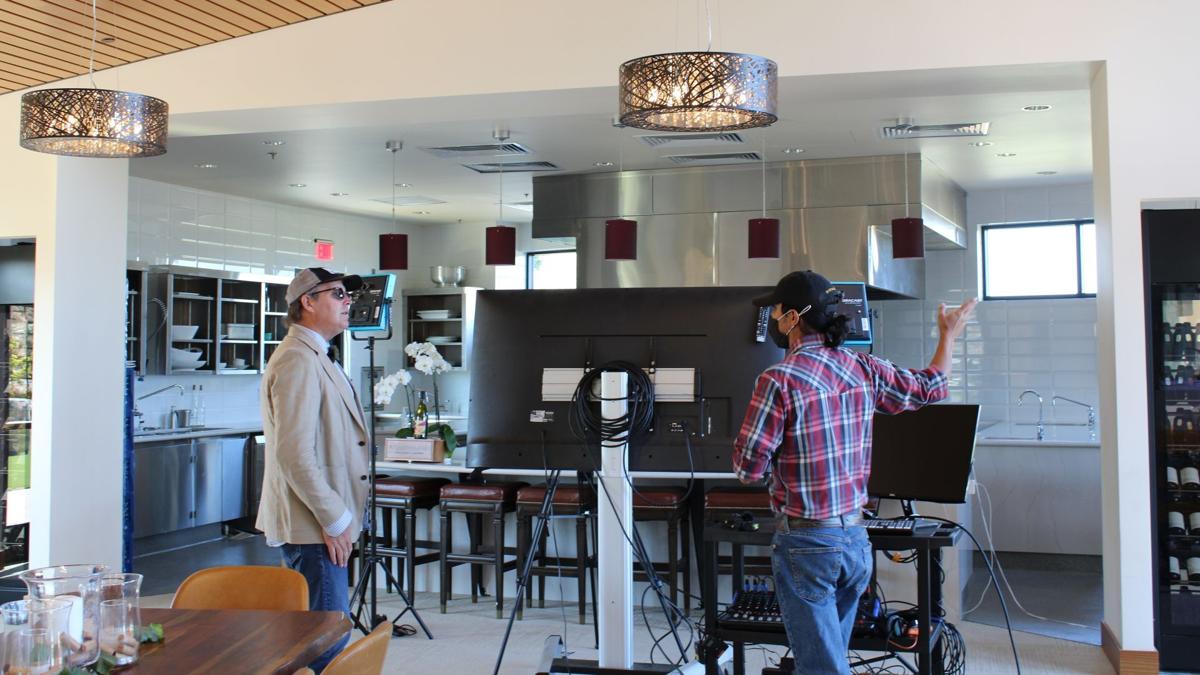 Brian Allard and Gabe Ide set up the virtual systems in front of the test kitchen for an upcoming tasting that evening.

Back in 2017, Brian Allard pitched an outlandish idea to his colleagues at Bouchaine Vineyards.

He admired how beautiful their property was, and wanted to find a way to reach their out-of-town customers without requiring travel. So after chewing on the idea for a bit, Bouchaine implemented its first -- and Allard says the U.S.'s first -- virtual tasting program in 2019. Chefs partnered with the winery for cooking classes, and the patio was filled with spread-out sommeliers conducting tastings.

A flood of other wineries adopted virtual formats as the pandemic forced Napans home and online, and now with vaccinations on the rise, many have ceased or drastically cut down on these efforts. However, for some wineries like Bouchaine, virtual tastings have now become a viable sales channel for their business, and they say they won’t be abandoning the medium anytime soon.

For Chelsea Hoff and her company Fearless Wines, staff was able to begin virtual tastings very early after stay-at-home orders were put in place back in 2020.

“Fortunately because of our size, we were able to create a unique virtual tasting experience practically overnight,” she said. “We have grown tremendously since our first virtual tastings early on. We’re unquestionably more efficient with scheduling tastings and handling shipping, but more importantly, we’ve gained a better understanding about why people are participating.”

Hoff says that she has seen virtual tastings teach people they can still come together and experience special moments, regardless of the distance, and that the meet-the-winemaker portion is more of an “added bonus.”

Hillary Cole of Bell Wine Cellars said they also started offering virtual experiences shortly after the area went into initial quarantine, and “that was kind of a valley standard.”

Instead of sending out kits of full bottles, Bell Wine Cellars sent their virtual tasters packs of airtight, 4oz. bottles, since many people were stuck at home with just their families, and thus didn’t want to open up multiple, 750 mL bottles for one sitting.

“That was a customization that I think they pulled off really well here at Bell, and it was a great contributor to how successful the program was,” said Cole. “It was a large part of the keeping things afloat here, and I think you see that success duplicated in the valley.”

The corporate world was also a big driver for these virtual tastings, as employers unable to connect with their employees in-person could book these events to be broadcasted to a handful or hundreds of people. Hoff said oftentimes a company looking for ways to bring their team together would have so much fun that they would then rebook an experience with a different department within the company.

For Bouchaine, which had launched their virtual programming prior to the pandemic, Allard and his colleagues experienced the shift in clientele for these tastings. Sure, their wine club members enjoyed the opportunities as planned, but corporate sales grew and grew during this time.

“Once COVID hits, suddenly it's not us transporting people to Napa, it became huge international companies transporting us around the world and around the country,” said Allard. “It would be me standing in front of the fireplace talking to a camera and lecturing people in five different countries, oftentimes who I couldn’t see.”

By hosting tastings with companies like Oracle and Cisco, Bouchaine has not only expanded its sales base but also have been granted other exciting chances to innovate its program. For example. Cisco is now using their new agricultural sensors on the Bouchaine property, to then be transformed into an online, real-time dashboard outlining vineyard conditions.

“It feels good to be an industry leader in something that matters,” said Allard, “That dashboard will talk about where each wine is coming from -- as we are talking in a virtual tasting or here in the tasting room -- outlining the different humidity levels and soil temperatures, and we will be able to interact with their customers using their technology.”

These sensors can be up to five miles apart while still communicating wirelessly, and both Allard and the Bouchaine winemaker, Chris Kajani, are excited to experiment with the data they will be able to work with.

“It can transform even our own understanding of our vineyard,” said Allard.

“We want to be a living lab, but most of the time, your data is one point,” said Kajani, explaining the disjointed nature of their current data system. “It'll be really interesting to see what all this data looks like and we are breathing our vineyard to life, almost.”

Bouchaine also collaborates with other organizations across the state to put on events like bourbon and wine tastings, cheese pairings, and even musical combinations with the help of the Philadelphia Orchestra. At these symphony and wine pairings, virtual tasters enjoy the wine chosen to go along with the composition being played in Philly.

“For the first time in 15 years, small wineries have a voice in the wine business again.”

In losing the face-to-face contact that tasting rooms typically thrive on, Bell, Bouchaine, and Fearless Wines all somehow found it easier than anticipated to connect with their customers through a screen. Cole shared a weekly meal with one repeat customer, and even watched neighbors embrace one another after making a pregnancy announcement. Hoff made a sort of routine out of her virtual tasting schedule, connecting with folks upon arriving home after walking the vineyard and catching up in the cellar.

And in the end, Bouchaine actually ended up hosting more people than if they had been fully open. (Double, at that.)

“One of the adages in business is to sell more to your existing customers, and it's supposed to be, quote, unquote, much easier than going out and finding new customers,” said Allard. “We did both. A little accidentally, but we did.”

Wineries in the Spring Mountain District AVA in St. Helena are welcoming visitors and customers to their tasting rooms.

Elegant and elegance are terms that often become part of the conversation when describing a wine. But, like minerality and certain other descriptors, they have no specific meaning other than you’ll know it when you experience it.

Pedroncelli's storyteller, Julie St. John and the Vino in my Dino

In addition to serving as vice president of marketing and third-generation family owner of Pedroncelli Winery based in Geyserville, California, Julie Pedroncelli St. John is the winery’s writer and editor, sharing stories about her family and employees who make the winery a success.

Eduardo Dingler, Wine to Sake: A renaissance after COVID-19

Eduardo Dingler looks ahead with optimism as Napa Valley reopens after a pandemic year.

Wine and friendship that sparkle: The story of Las Amigas Cuvée

Two friends bonded over wine and ended up collaborating on a new sparkling version.

First in-person event since 2019, but the virtual run option remains from 2020.

The Bouchaine Vineyards virtual tasting set up is capable of switching between the kitchen, the vineyards, the patio and other meeting spaces with a click of a button.

In addition to indoor cameras and the demonstration kitchen, Bouchaine Vineyards also sets up cameras out on the patio and sometimes even in the vineyard.

Brian Allard and Gabe Ide set up the virtual systems in front of the test kitchen for an upcoming tasting that evening.