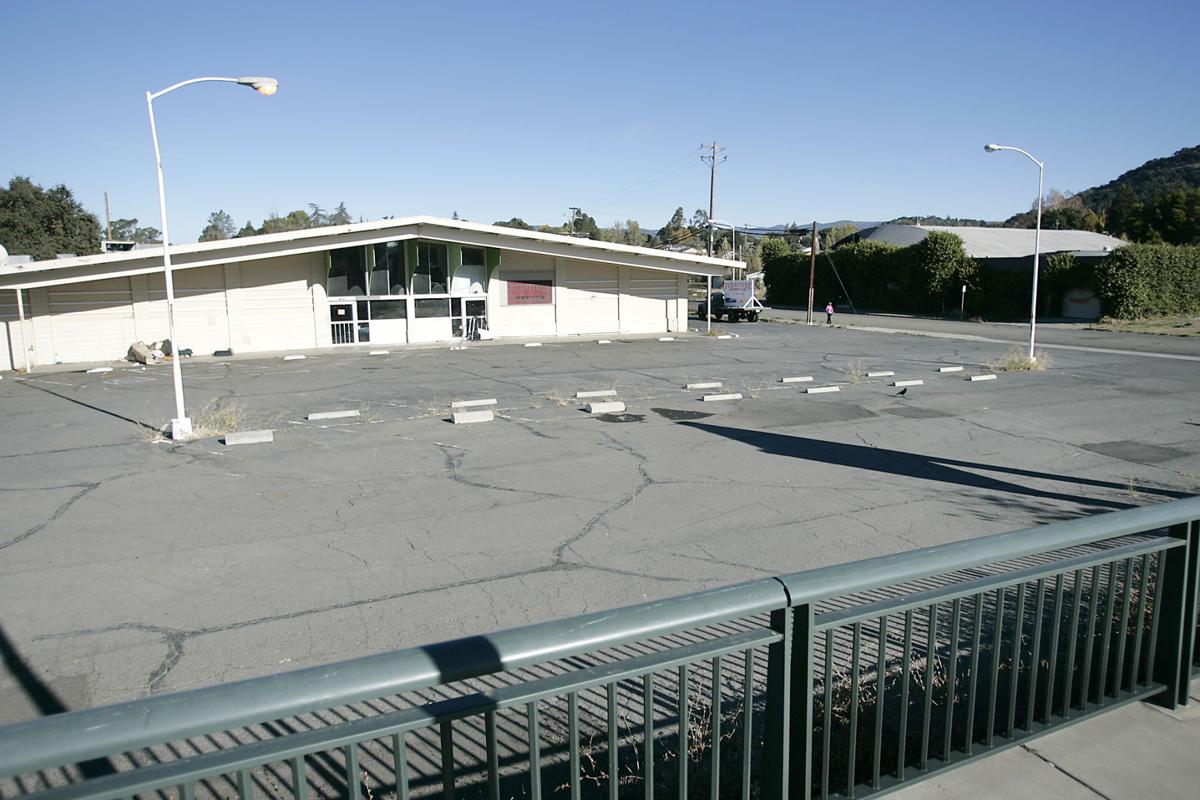 These two buildings are located on an 11-acre parcel on First Street near Silverado Trail that has been listed for sale.

Pictured are the Furniture 4 Less building, right, and the former JV Liquor Warehouse, left. A Ritz-Carlton resort had been approved for the parcel. 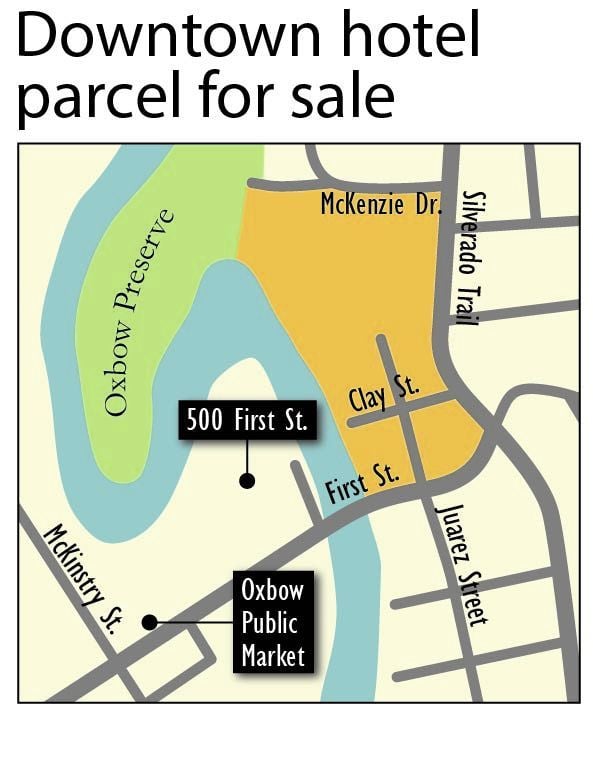 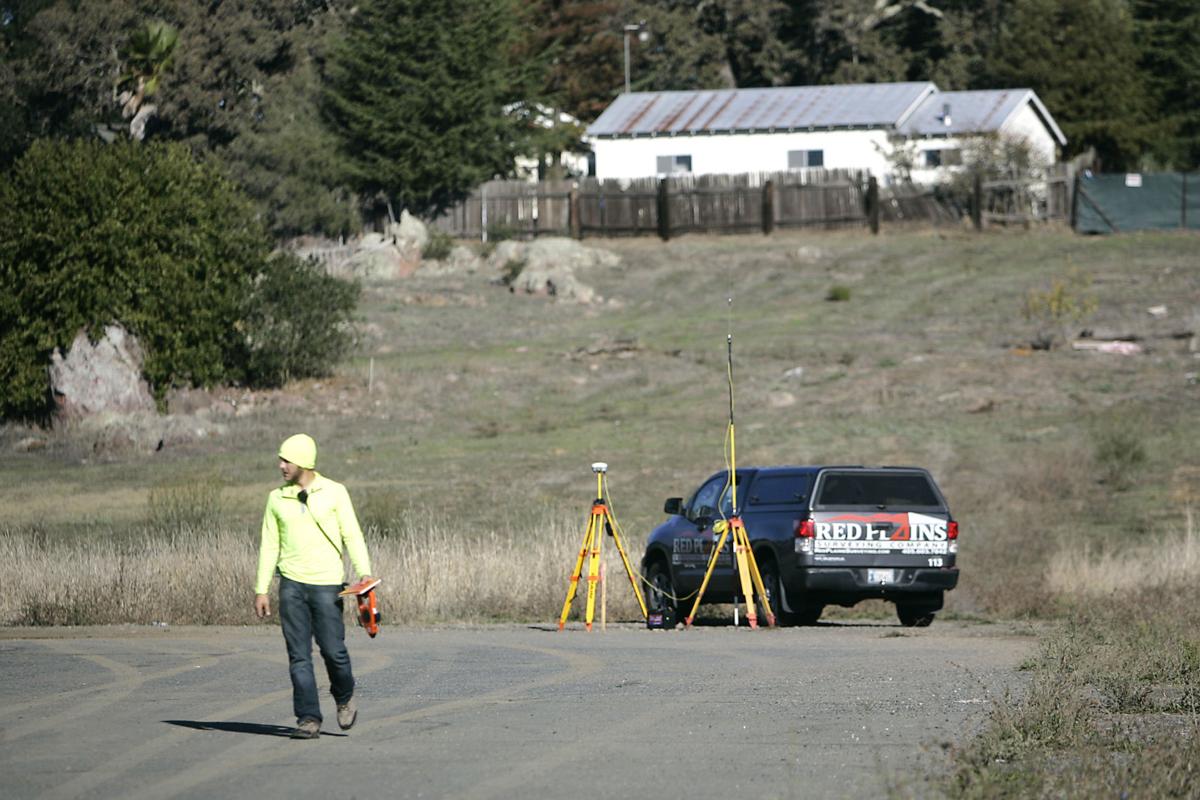 A survey company on this 11-acre parcel on First Street near Silverado Trail takes measurements on Thursday morning. A Ritz-Carlton resort had been approved for the parcel. The property, which includes the Furniture 4 Less and former JV Liquor Warehouse buildings, has been listed for sale. 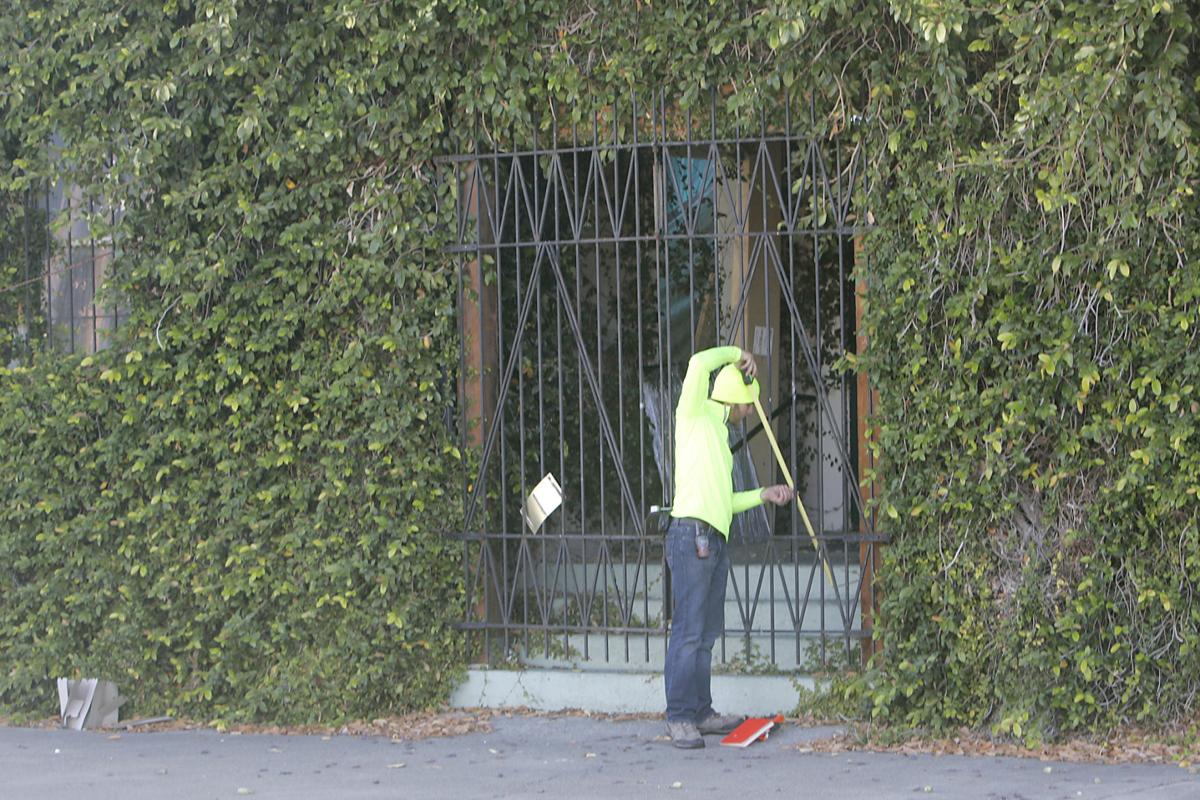 A worker takes measurements on the Furniture 4 Less building near Silverado Trail and First Street on Thursday morning. The building is on an 11-acre parcel that has been listed for sale. A Ritz-Carlton resort had been approved for the parcel.

A prime piece of downtown real estate, approved for a 351-room luxury resort, is back on the market.

In 2008, the city approved the Ritz-Carlton resort at an 11-acre parcel at the corner of First Street and Silverado Trail. However, while the property has gone through several owners, development has not begun.

The current owner, Palm Hill, is a real estate development group with offices in Florida and North Carolina.

According to an email solicitation distributed this summer, offers to buy the “fully approved and programmed luxury resort,” property were due Sept. 15.

“Palm Hill listed the hotel site for sale a few months ago to see what interest there might be in the property as they move towards the development phase of the project,” said Palm Hill’s Napa attorney, Kevin Teague.

“We are continuing work on infrastructure and improvements at the site and are now bidding demolition plans for the buildings in preparation for development work,” he said. Survey workers were seen at the site on Thursday.

The site at the northwest corner of First and Silverado is mostly open land, with buildings that formerly contained Furniture 4 Less and a JV Liquor Warehouse.

Right before the recession, the city approved a luxury Ritz-Carlton resort containing 351 rooms, a spa, restaurant, boutique shopping and underground valet parking. News of the five-star brand coming to Napa was heralded with great praise, but during the recession, the project stalled for lack of financing.

In March 2012, Brad Weiser, managing partner of River House Land Co., the then-Ritz developer, said his group was exploring other hotel and resort brands. Palm Hill bought the property in 2013, but again, development did not progress.

“I think it’s a good site for an upscale, perhaps luxury, property,” said Don Winter, a Napa-based hotel expert. Now that the CIA has purchased the former Copia site and plans to revive it, “that adds some renewed interest and demand” for the resort.

“Palm Hill is very excited about the recent sale of the Copia building to the CIA, which will cement the Oxbow district and our site as the crown jewel of Napa city,” said Teague.

A new resort will cause competition among other downtown area hotels, “but overall it will be a good thing for Napa,” said Winter.

City community development director Rick Tooker said the city knew the Ritz site would be listed for sale. Because the development of the project is dynamic and complex, the desire to “check in” with the market to gauge the property’s value is not entirely unusual, he said.

Winter said the land could sell from $30 million to $50 million. According to the Napa County Assessor’s office, the property is currently valued at $13.6 million.

According to the email solicitation, other hotel properties in Napa Valley have sold for amounts ranging from $725,000 to $1.4 million per room. At $1 million per room, that would mean a fully developed resort could be valued at around $351 million.

Winter said he’s not sure why it has been listed for sale. “The group that holds it now may not have the financing,” said Winter. “There may be a stronger group willing to pay more to get a presence in the Napa Valley. The current owners might make a good profit by selling,” he said.

Tooker said that since the property was last sold there has been a lot of discussion about problems that affect the parcel, such as the status of the Copia property, completion of the bypass channel and its relationship to reducing flood conditions in the Oxbow area, funding availability — or the lack of — for the next phases of the flood improvements, downtown construction and the Archer Hotel.

“Changes have been ongoing by the property owner as well, such as aggregating land to free up opportunities not considered by the previous ownership, analyzing intersection improvements at Silverado Trail and Third Street, planning and designing storm drain improvements to address surface drainage from across the street, freeing the property of its tenant and planning for demolition of the buildings,” Tooker said in an email.

The outcome of the project is never certain until a building permit is issued and construction begins, Tooker said.

“These types of projects take time,” he noted. “However, the entitlements for this particular project remain in place and we remain optimistic that the project will proceed.”

Winter said the Ritz-Carlton name could return to the project. “Ritz would love to be in Napa,” said Winter. “Any luxury operators would be likely targets for this hotel.” Other brands that might want to stake a claim in Napa could be the Taj hotel group, Mandarin Oriental or the Four Seasons, he said.

Napa resident Joe Fischer, who has been involved with other land development projects in Napa, said that he thought a likely sale price would be closer to $40 million.

Fischer is frustrated that the property has remained in limbo for so long. Palm Hill took advantage of the city with promises of a five-star resort that never materialized, he claimed.

“They shut down city action on any downtown hotel development other than the Archer hotel because they claimed it would hurt their ability to come out of the ground and secure their needed financing,” said Fischer.

“I do not know what promises he is referring to,” said Teague in response. “I have worked on this property with Palm Hill and the prior owner for over a decade. We have worked well with all agencies to keep the project moving ahead, notwithstanding the major setbacks caused by the recession.”

Tooker noted in an email that “the city does not have the ability to ‘make someone build something. What the city can do is to provide the advanced planning to pave the way for a smoother process when a proposal is presented that is consistent with an adopted vision.”

In 2013, Palm Hill and partners also acquired the former Vallergas parcel immediately south of the complex. At this point, the space does not appear to be part of this offering, but there is speculation that it could become part of a deal.

Veil of secrecy hangs over archaeological dig near downtown Napa

An archaeological excavation, now entering its fifth month at a future Napa luxury hotel site is in view of streams of motorists on two busy s…

After a year of archaeological digging, what's next for Napa resort site?

After a year of digging, archaeological excavations at a future downtown Napa hotel site have come to an end.

These two buildings are located on an 11-acre parcel on First Street near Silverado Trail that has been listed for sale.

Pictured are the Furniture 4 Less building, right, and the former JV Liquor Warehouse, left. A Ritz-Carlton resort had been approved for the parcel.

A survey company on this 11-acre parcel on First Street near Silverado Trail takes measurements on Thursday morning. A Ritz-Carlton resort had been approved for the parcel. The property, which includes the Furniture 4 Less and former JV Liquor Warehouse buildings, has been listed for sale.

A worker takes measurements on the Furniture 4 Less building near Silverado Trail and First Street on Thursday morning. The building is on an 11-acre parcel that has been listed for sale. A Ritz-Carlton resort had been approved for the parcel.