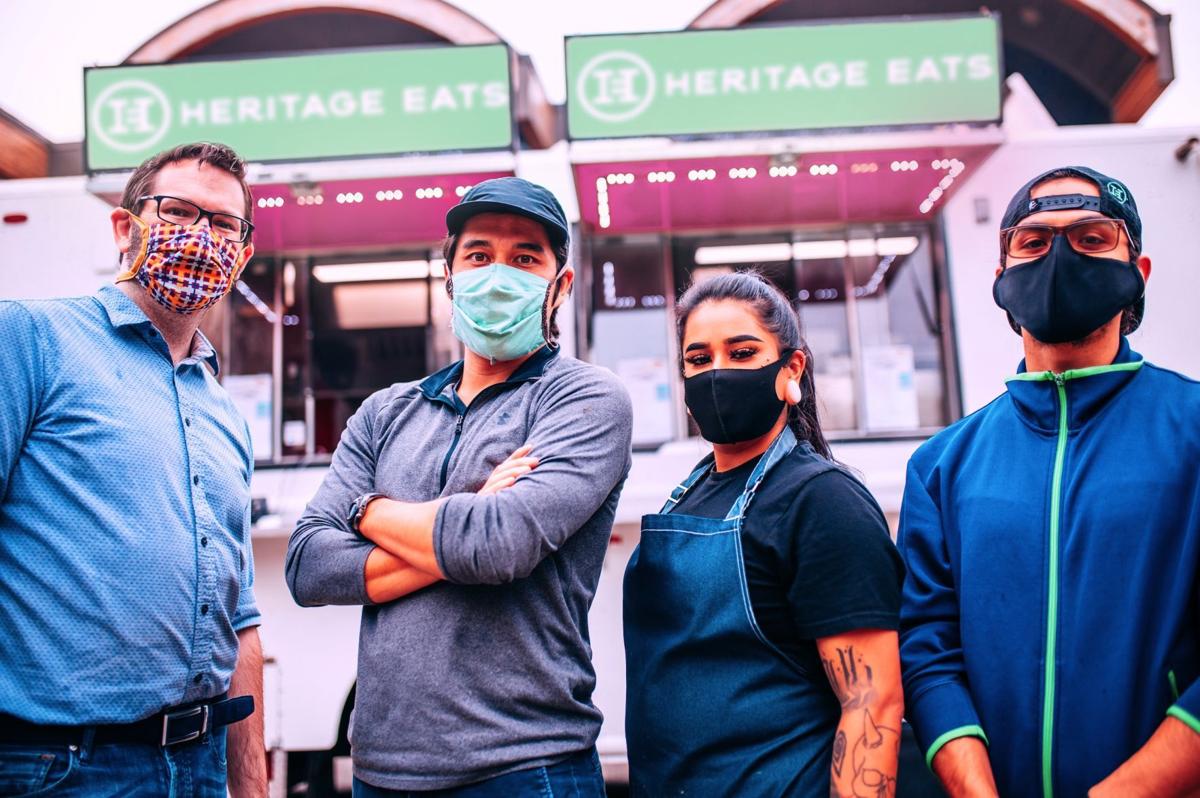 Charles Whittaker and Ben Koenig alongside Maria Diaz and Isbal Guerrero, part of the Heritage Eats crew. Koenig, wife Ali and Whittaker together opened up Haven Wings that operates separately from Heritage Eats out of a commercial kitchen in south Napa, following the "ghost kitchen" model. 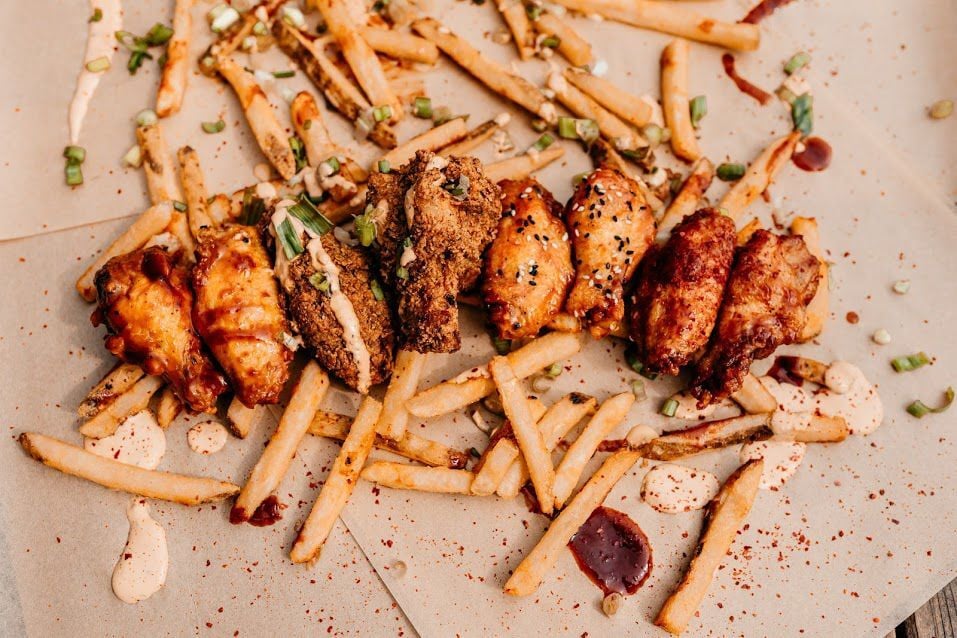 Menu items from Haven Wings, an online only wings joint run by Heritage Eats owners Ali and Ben Koenig and their business partner and general manager Charles Whittaker. The restaurant is run as a ghost kitchen, a business model that operates around pick-up and delivery orders only. 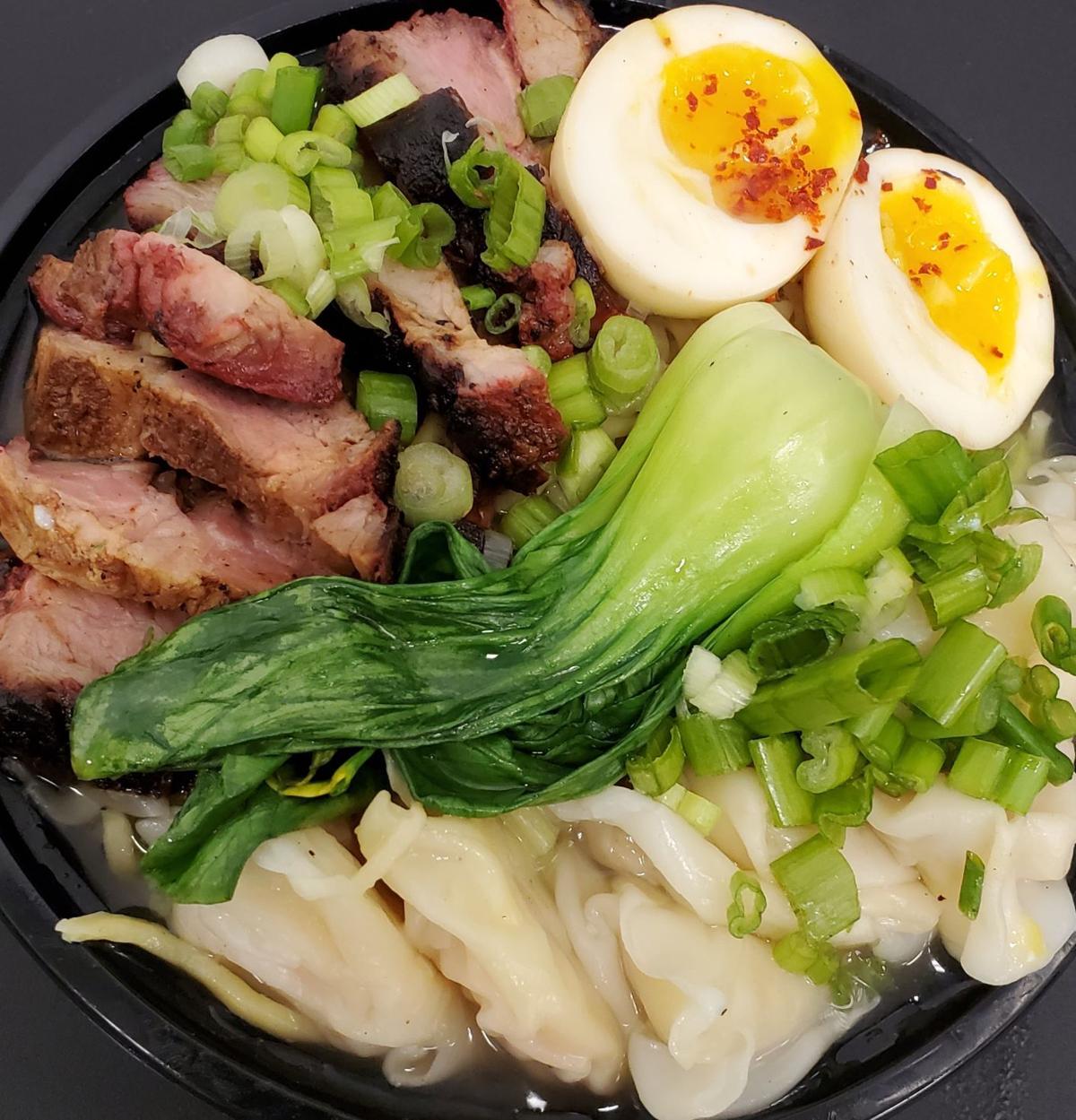 dThe premise is this: no pristine white tablecloths. No impeccably mannered waitstaff. In fact, no indoor or outdoor dining options whatsoever, pandemic or not.

That’s the business model behind ghost kitchens, delivery-only pop-up restaurants becoming increasingly popular in the United States. And in Napa Valley, a region famous worldwide for its sit-down, full-service restaurants, a handful of business owners are hedging their bets and foregoing the brick and mortar model.

Among that group are Ben and Ali Koenig, who alongside their general manager and business partner Charles Whittaker opened up Haven Wings, a ghost kitchen, this fall. The husband and wife pair and Whittaker are also behind Heritage Eats, a local restaurant with — yes — physical premises.

In an effort to grow their business, the trio in 2018 opened up a Walnut Creek Heritage Eats location, Ben Koenig said, but extended lockdowns forced its closure. Still, the desire to expand remained, he said, and opening a ghost kitchen was a less capital-heavy way to do so.

Haven Wings currently rents commercial kitchen space from Spork Kitchens in north Napa, paying a fraction of the rent it otherwise would have for use of its own retail space.

“It’s a rough market right now when it comes to opening a business,” General Manager Whittaker said. “Being able to run an operation that doesn’t have a brick and mortar location at this time means we have more flexibility, and we don’t have this huge overhead going into it, which makes it more versatile for us.”

The United States was home to more than 1,500 ghost kitchens in 2020, according to the market research analytics firm Euromonitor, which found the business model “could create a $1 trillion global opportunity by 2030.” The pandemic, which in California has now twice forced even brick and mortar restaurants to operate on a to-go basis only, has only accelerated the appeal of ghost kitchen model, the market research company The NPD Group found: even as restaurant traffic declined 22% year over year in March of 2020, the volume of digital and delivery orders rose 63% and 67%, respectively, through the course of the month.

Ghost kitchen operations — Haven Wings included — often use existing, app-based delivery infrastructure to reach customers. Eager customers can purchase directly from Haven Wings’ website, Koenig said, or utilize any one of the delivery platform apps they might already have, including DoorDash and Uber Eats.

Haven Wings shares the premises at Spork with iPOKEshack, the Hawaiian-inspired brainchild of Napa resident Mark Mazotti, who originally intended to launch the brand as a brick and mortar restaurant.

“COVID, with its restrictions, caused us to rethink that. I thought of the consumer-direct model used by technology startups,” Mazotti said. “I am not a restaurateur using technology for my business — I am a tech person who has a restaurant background, using technology to move us into an arena I feel has enormous growth potential.”

He has since added dim sum (iDIMSUMshack) and ramen (iRAMENshack) to his offerings. Because he only operates for pick-up two nights a week, Mazotti is not on app-based delivery platforms, most of which require vendors to be open a minimum of four days a week for service. Customers can order ahead and select a pick-up time on Mazotti’s website, he explained.

It’s a model Mazotti and his small team are still working out: the website doesn’t currently let them limit the number of orders scheduled for any given time, which resulted last weekend in a hectic order back up and long wait times for customers.

Though Spork Kitchens opened with the ghost kitchen business in mind, it had up until this year served mostly as an outlet for commercial caterers, according to Sandy Sauter, who co-owns Spork with husband Brad Gates. Their greatest concern upon Spork’s opening in January of 2019 was how long it would take for the ghost kitchen trend to catch on in Napa Valley.

“It’s a dine out environment — that’s what we’re all about here — but I knew it would come someday,” she said. “With COVID, it’s come on like gangbusters, and I don’t think it’s going to go away.”

Spork is currently host to Haven Wings, iPOKEshack and Hal Yamashita Napa, which Sauter said is currently seeking out a new brick and mortar location after moving out of its Napa premises. In the interim, though, the Japanese restaurant is cooking up orders for pickup and delivery out of their south Napa space.

One of the largest obstacles facing ghost kitchens, Haven’s Whittaker and Koenig think, is unfamiliarity. Consumers on app-based delivery platforms are likely to lean toward restaurants and community brands that they know, the pair said, and so even though Haven Wings is entirely separate from Heritage Eats, they’ve used Heritage’s social media to promote Haven’s products in an effort to alert consumers in Napa. So far the response has been encouraging, Koenig added.

Sauter, reflecting on the two true ghost kitchens that have popped up in the last few months, said she hoped the business model would encourage some diversification of the culinary landscape in Napa. The restaurant industry here is a crowded one, she said, and the lessened overhead involved with the ghost kitchen model could make room for chefs and restaurants that would never have otherwise been able to set down roots in Napa.

“The restaurant model is a very tight margin, and a very tough business to be in (even normally),” Sauter said, adding she believes more such ghost kitchens could very well emerge over coming months and years.

“With this, though, people (could) flood in a little bit better, and maybe see they can diversify their offerings without turning away tourists. The lower overhead, the lower risk and creativity is going to be attractive to a lot of people,” she added.

iPOKEshack brings a taste of Hawaii to Napa

Tim Carl, Local Tastes: The future of restaurants in Napa Valley and beyond

Those food-service companies that do survive to reopen in 2021 — along with their customers — will confront a culinary landscape that is fundamentally different from years past.

Philip Tessier of PRESS restaurant in St. Helena was a catalyst for a community effort to feed people harmed economically by the pandemic.

California's outdoor dining ban was controversial. Did it help slow the COVID-19 surge?

There is increasing evidence that California's latest stay-at-home order, including a ban on outdoor dining, worked to turn around a deadly surge of the coronavirus.

Charles Whittaker and Ben Koenig alongside Maria Diaz and Isbal Guerrero, part of the Heritage Eats crew. Koenig, wife Ali and Whittaker together opened up Haven Wings that operates separately from Heritage Eats out of a commercial kitchen in south Napa, following the "ghost kitchen" model.

Menu items from Haven Wings, an online only wings joint run by Heritage Eats owners Ali and Ben Koenig and their business partner and general manager Charles Whittaker. The restaurant is run as a ghost kitchen, a business model that operates around pick-up and delivery orders only.