The Glass Fire was no longer expanding at a fast rate Wednesday, but dangerous weather conditions lie ahead, prompting new evacuation warnings Upvalley.

Last weekend’s Red Flag conditions fueled the growth of Sunday’s Glass Fire, which has burned 48,440 acres in Napa and Sonoma counties as of Wednesday morning. The fire grew by only a couple of hundred acres Tuesday night, Cal Fire said.

The new Red Flag warning calls for less severe winds of 10 to 20 mph at ground level, but they could propel fire growth into new areas on the valley floor, including the city of St. Helena which was put under an evacuation warning Wednesday.

The new warnings are a matter of “due diligence,” said Janet Upton, the county’s public information officer. “We’re hoping for the best, but preparing for the worst.”

Given the bone dry conditions, Napa County will remain vulnerable to “significant fire weather,” Upton said. Winds on Thursday will be coming from the northwest for the first time, the National Weather Service said.

The new evacuation warning includes the valley floor between Highway 29 and Silverado Trail from Zinfandel Lane to Larkmead Lane, including St. Helena.

Earlier evacuation orders remain in effect over a broad swath of the Upvalley, including all of Calistoga and the communities of Deer Park and Angwin. 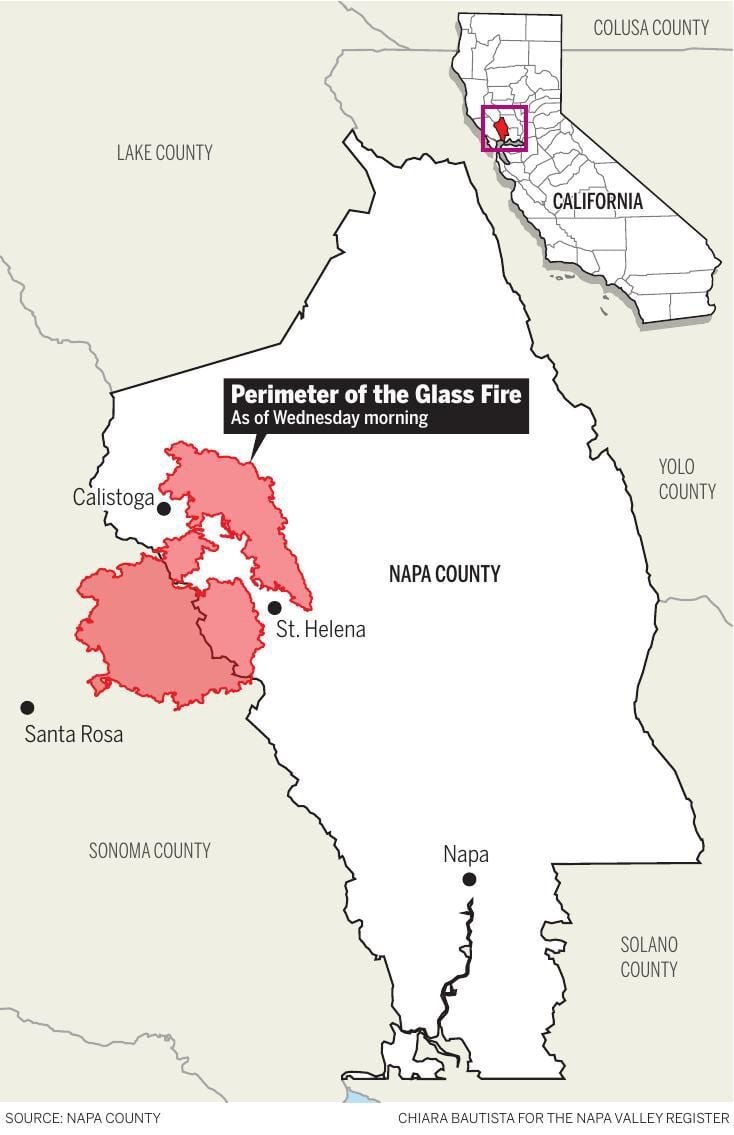 Evacuation orders or warnings have been issued for 7,456 households, affecting 18,641 people in Napa County, Napa County reported at mid-day Wednesday.

Mandatory orders have been applied to 4,823 households with an estimated 12,058 occupants, the county said.

The city of Calistoga reported in an afternoon Nixle message that Cal Fire had brought in “significant additional fire resources” to protect the city, with the Calistoga Fire Department patrolling for potential fire spots.

With less smoke over the Upvalley Wednesday, Cal Fire had hoped to make better use of its helicopters and air tankers to fight the Glass Fire, the agency reported.

Thick smoke limited the use of air resources on Tuesday, when flames were active on the hillsides east of Calistoga and also burning near Bothe Napa Valley State Park and Angwin. The fire was 2% contained as of Wednesday morning.

The Glass Fire broke out near Deer Park before dawn Sunday during a Red Flag warning when high winds, low humidity and hot conditions raised the fire threat.

The temperature is expected to soar over 100 degrees in Napa County on Thursday, and remain nearly that hot on Friday, the Weather Service said.

There are 22,553 structures threatened in the two counties. No deaths or serious injuries have been reported.

Pacific Gas & Electric said 5,200 customers in Napa County were without power on Wednesday, a reduction of several thousand customers since Tuesday. Many of these are in the fire zone or in evacuation areas, said Deanna Contreras, a PG&E spokesperson.

Calistoga lost power at noon Wednesday when Cal Fire asked PG&E to deenergize the transmission main from Middletown, but backup generators were to be activated, the city reported.

The utility has also shut off gas to 1,400 customers in Napa fire areas, Contreras said.

The cause of the Glass Fire remains under investigation.

Watch Now: A journey upvalley during the Glass Fire

As of Tuesday evening, the town of Calistoga was intact as flames neared the city from the northeast side.

Watch Now: Thousands evacuated in Napa Valley due to wildfires

Tens of thousands people have been ordered to evacuate the Napa Valley region due to wildfires.

The Glass Fire has been yet another blow for a region that has suffered through several bad fire seasons, starting in 2017.

Meadowood Napa Valley's three-Michelin-starred Restaurant at Meadowood, as well as the Grill at Meadowood and a golf shop, were all destroyed in the fire.

These new laws speed up insurance claims by fire victims and allow law enforcement statewide to use hi-lo sirens as Napa County does.

The respite from a heat wave that set records didn't prove to be a very long one.

Napa's air is terrible and it may stay that way

A marine layer of air is trapping Glass Fire smoke over the Napa Valley.

Meadowood Napa Valley's three-Michelin-starred Restaurant at Meadowood, as well as the Grill at Meadowood and a golf shop, were all destroyed in the fire.

The fire retardant dropped out of planes? It's sticky, gooey and made in the Southland

It's a sight now synonymous with California's fire season: A tanker aircraft flies over vegetation and drops a stream of red. But what exactly is that stuff?

Still no damage to Calistoga from the Glass Fire, mandatory evacuation remains

Expected overnight winds did not materialize and the fire remained relatively static. At this time there has been no fire or fire damage within the city limits, and the evacuation order is still in place. The Glass Fire is at 5% containment.