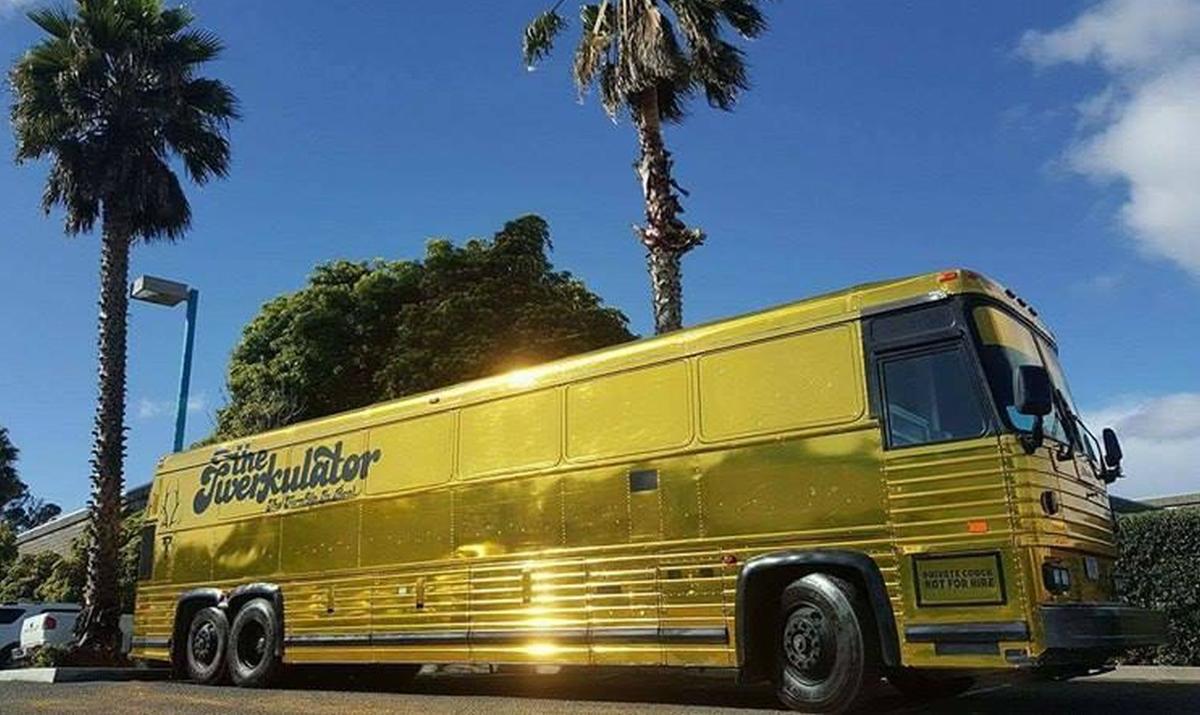 The Twerkulator, a 40-foot converted prison bus, has been delivering supplies and donations to shelters and evacuation centers during the ongoing fires. 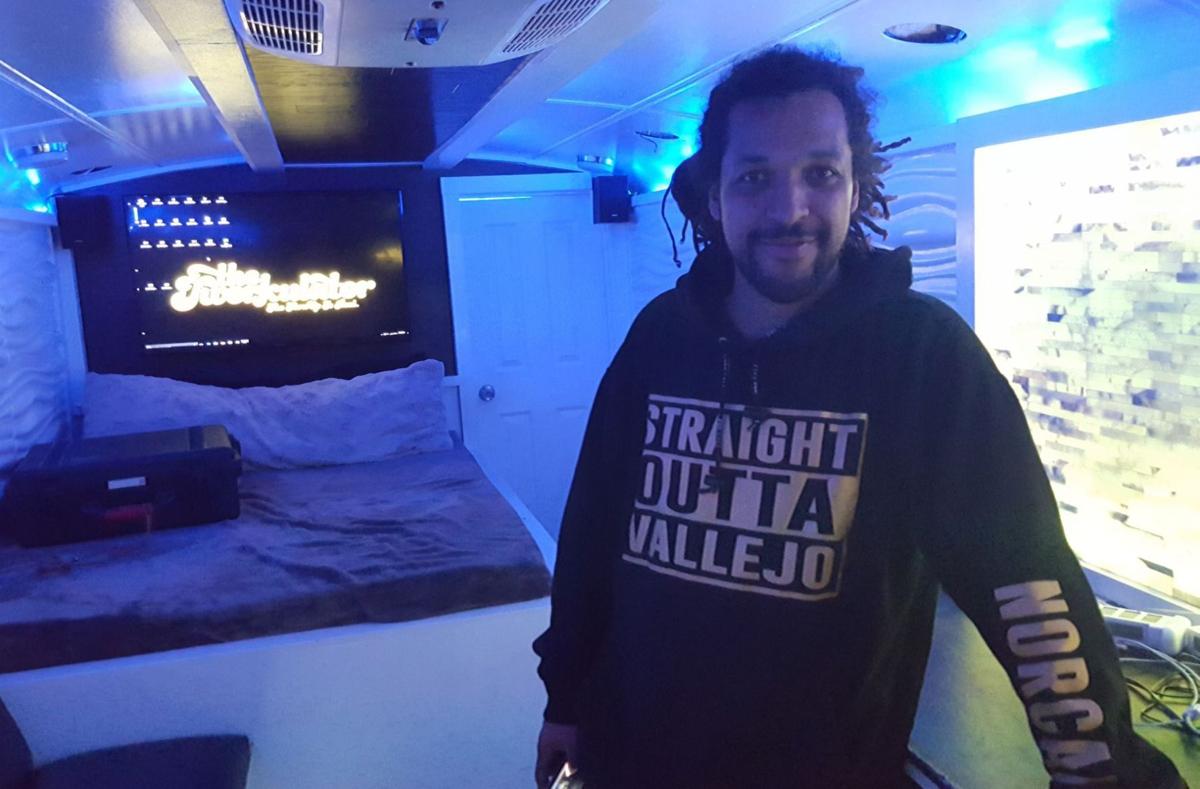 Curtis Nelson inside his party bus The Twerkulator, which he’s been using to deliver food, clothing and other supplies to relief shelters and centers in Napa and Sonoma counties during the fires. 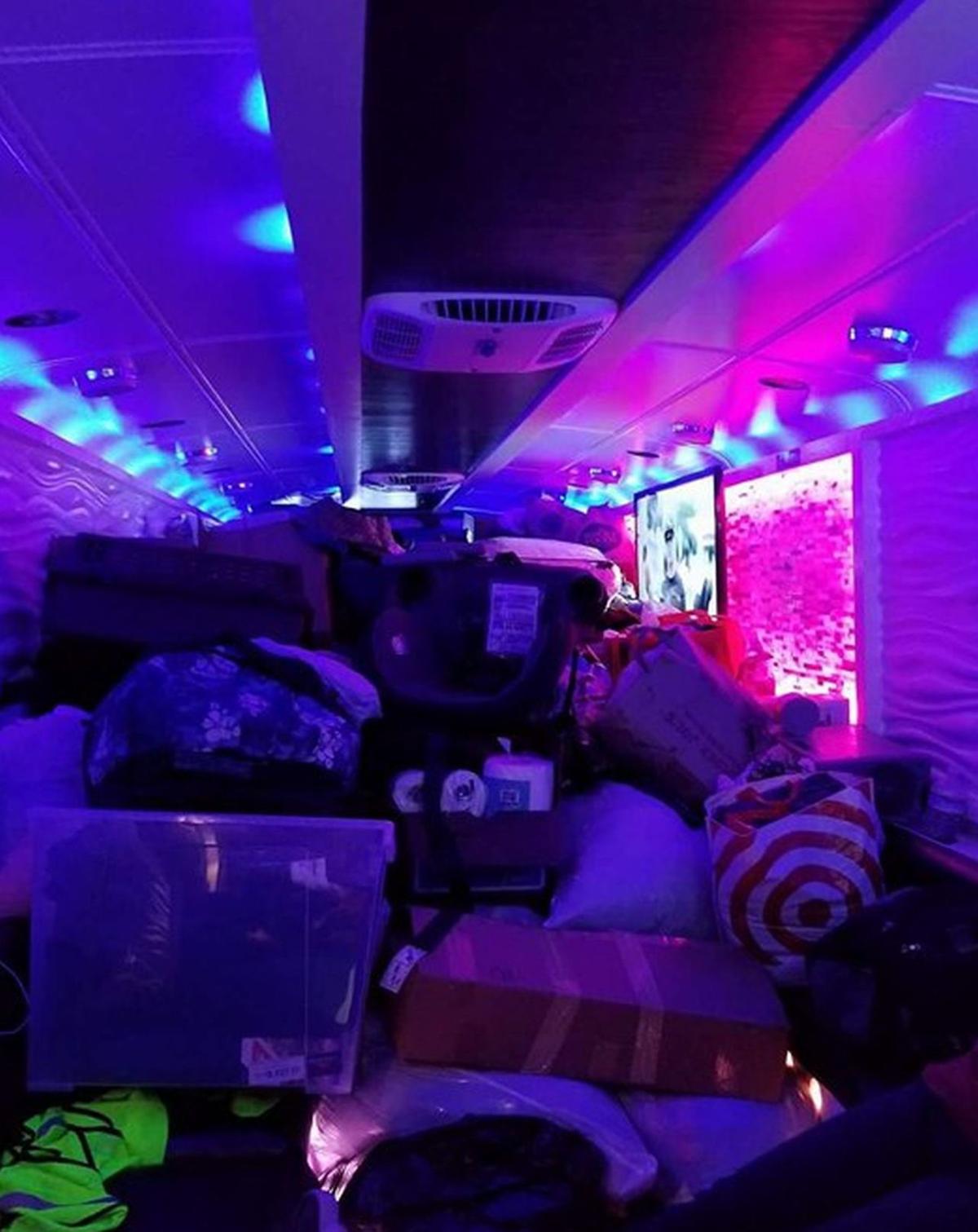 The Twerkulator loaded with donated goods and supplies during one of Curtis Nelson's runs this week to shelters housing fire victims and evacuees.

What’s metallic gold on the outside, neon blue and purple on the inside, and delivers relief supplies to fire victims?

When American Canyon turned its high school into a shelter for Calistoga evacuees, it needed supplies for people displaced by the fires.

The donations and help poured in, but none were more conspicuous than those delivered in a 40-foot, gold-colored party bus called The Twerkulator.

Nelson is the owner and creator of The Twerkulator, a former federal prison bus he customized so he could party with his friends and family.

“It looks like a party bus, but it’s my festival bus,” which he takes to events like Burning Man, said Nelson, who handles fundraising for 89.5 Ozcat Radio in Vallejo, which his family owns.

When the fires broke out in the North Bay, Nelson decided he wanted to do something to help those impacted by the disaster that has forced thousands of people from their homes, in addition to those who have lost theirs to the infernos.

“I said to myself, I have this huge vessel to move things,” Nelson said from the driver seat of The Twerkulator on Wednesday night while sitting in the parking lot of American Canyon High School.

“So why don’t we just find out where all the collection spots are and go swoop it,” he said.

He and some friends hit the highway and began visiting businesses in Solano County that had been collecting contributions for fire victims.

“We went to Vinny and Rosie’s in Suisun City, then we went to Western Ranch [and Pet Supply] in Vacaville, then went to the Sweat Heroes [Bootcamp] in Vacaville,” said Curtis.

“Pretty much everyone gave food, water and supplies,” he said. “All of it was a community effort.”

The Twerkulator, which features mood lighting, a sound system, flat-screen TVs, a full-size bed and cushion bench seats, was even used to pick up supplies for animals affected by the fires.

“While we were at the feed store, we missed the pickup [because] somebody had already picked up the stuff when we got there,” Curtis recalled from his travels earlier that day. “So instead of just leaving, we waited, and as customers came in and saw this 40-foot gold tour bus, they asked what we were doing. We said we’re picking up supplies, and some people bought hay for horses.”

“So we loaded the underbelly [of the bus] with all this hay,” along with donations from the UC Davis School of Veterinary Medicine.

When The Twerkulator pulled up in front of the American Canyon High gym, some residents rolled their eyes.

A volunteer at the evacuation center said Nelson and his creation have “a bad rap” because people make assumptions about what goes on inside The Twerkulator.

“But he’s here helping out,” said the volunteer, so maybe he’s not so bad after all.

Nelson admitted people assume things when they see his bus.

“They might have their preconceived ideas of what goes on in here,” he said, “and then they come inside and they’re like, this is awesome!”

Nelson said he’s never helped people during a crisis before this. But he’s glad he did.

So good that he was back at it the next day on Thursday.

“We’re going to keep doing this until we don’t have to do this, you know what I mean,” he said.

“It’s not costing me anything,” he said, “and we’re all helping each other. Let’s keep it going.”

Nelson set up a GoFundMe page to raise gas money for The Twerkulator, which can be costly to keep fueled. “My gas gauge doesn’t work, so I just fill up every 500 miles,” he said.

He spent $400 of his own money on the trips, and managed to get $390 of it back through donations.

On Thursday, he drove The Twerkulator to San Francisco to pick up “700 pairs of shoes” from Allbirds Shoes plus food and clothing from Love on Haight, and drove it to the Roaring Donkey in Petaluma, which was distributing supplies to shelters.

“We’re going to try and make it fit,” Nelson said during a live video recording on Facebook as he drove across the Bay Bridge to pick up the donations.

“You’ll see it,” he said to a friend accompanying him. “It’s hella shoe.”

The Twerkulator got its name from the dance style known as twerking.

“Everyone was into twerking, this was back in 2013,” when Nelson created his first Twerkulator, a gold-painted motorhome.

But then he wanted “to create something no one has ever seen, but everyone would love: a gold bus.”

“People have boats and they name their boats things, you know,” Nelson said. “So I was, I want to make a gold Twerkulator.”

“Who could say no to a gold Twerkulator?”

The current Twerkulator came into being after Nelson purchased a used prison bus from Indiana on eBay.

“The funny thing is, four years later, we’ve got a bigger, remodeled 40-foot bus,” he said.

He not only remodeled and painted it, he also cleansed it in light of its past of hauling convicted criminals to prison.

“We saged it” to clean out the negative vibes from its prisoner days, he said.

A typical shift during a wildfire is 24 hours, but that wasn’t the case for those going up against fires in Napa and Sonoma counties this past…

Conditions in Calistoga remained stable Friday night, despite initial fears that increasing wind might push the flames down toward town.

The Twerkulator, a 40-foot converted prison bus, has been delivering supplies and donations to shelters and evacuation centers during the ongoing fires.

Curtis Nelson inside his party bus The Twerkulator, which he’s been using to deliver food, clothing and other supplies to relief shelters and centers in Napa and Sonoma counties during the fires.

The Twerkulator loaded with donated goods and supplies during one of Curtis Nelson's runs this week to shelters housing fire victims and evacuees.