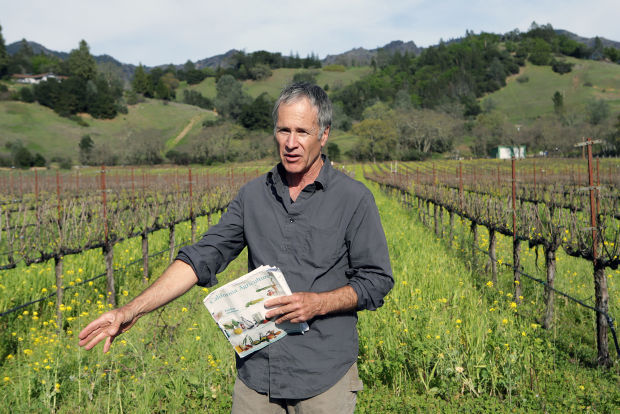 Bob Shaffer, an agronomist who advises the Chateau Montelena winery, describes the dozen or so varieties of cover plants that help stabilize and enrich the winery's vineyards north of Calistoga. 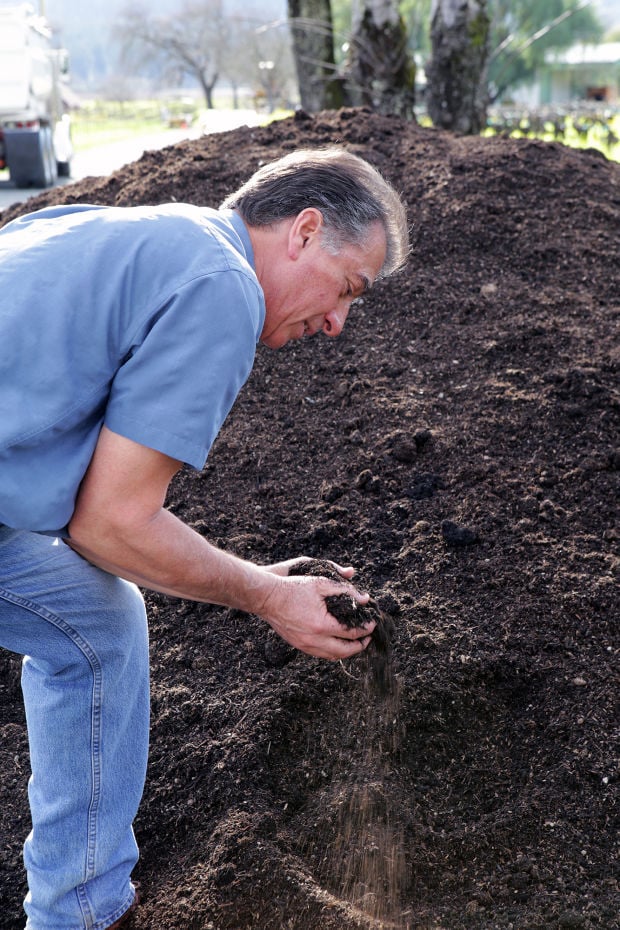 Dave Vella, vineyard manager at the Chateau Montelena winery near Calistoga, samples a load of compost at winery vineyards Sunday during a tour and presentation on the importance of cover-crop planting and composting to reduce the use of pesticides and fertilizer. 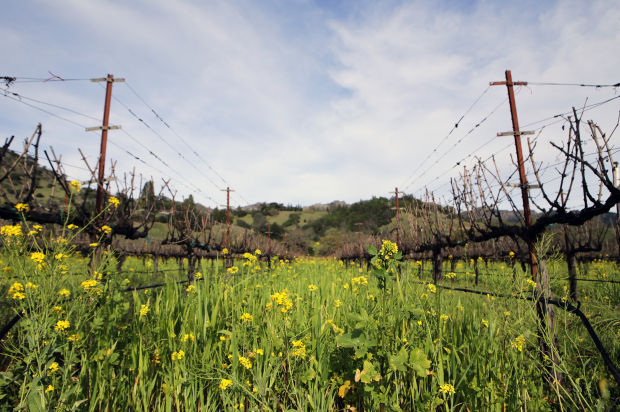 An array of ground-cover plants including barley and Blando brome grass fill the 8-foot-wide gaps between vine rows at Chateau Montelena outside Calistoga, providing an anchor for soil that also absorbs carbon dioxide and harbors beneficial, pest-attacking insects.

CALISTOGA — What helps to absorb greenhouse gases, extend the life of farmland and keep soil moist in times of drought? At one of the Napa Valley’s most famed wineries, growers turn their eyes downward for their answer – toward the humble-looking, easy-to-miss plants between the rows of grapevines.

Most visitors at the Chateau Montelena grounds may first notice the columns of vines producing grapes for its famed vintages. On Sunday afternoon, however, a group of visitors turned their attention instead to the Blando Brome grasses, barley and other ground-cover plants filling the 8-foot-wide gaps between the rows.

Encompassing a program of cover crops and extensive composting, its supporters say, is the goal of allowing the soil and its inhabitants to fulfill their normal purposes.

“It’s all about balance; we want to maintain what we already have (in the soil),” said Dave Vella, Chateau Montelena’s vineyard manager. “We’re not going to ‘improve’ on anything. … You have to look at soil like a big checking account; you make a deposit and you get a return, but you can’t keep withdrawing from the soil.”

About a dozen species of soil-hugging vegetation serve as counterpoint and guardian to Chateau Montelena’s famed vines. By pulling carbon dioxide from the air, retaining water, harboring pest-hunting insects and strengthening the ground against erosion, the plants form what its creators – Vella and the agronomist Bob Shaffer – describe as a safeguard against the fields’ exhaustion, a step they urged other farmers to emulate to lessen the burden of fertilizer and pesticide costs.

On Sunday, Shaffer and Vella led about 20 visitors past vineyards serving as living test beds for different cover plants and farming techniques. Between certain vine rows were experimental plant choices such as strawberry clover or Cucamonga brome; other rows had been left unmowed for a season, to lessen soil compaction that would slow the absorption of water.

Such experimentation, according to Shaffer, will permit future growers greater economy in the use of fertilizer, by learning which minerals already are plentiful. The light-touch approach also is meant to preserve the earthworms, nematodes, bacteria and other organisms that break down plant matter into the organic material that gives crops – including grapes – their character and quality.

“It used to be said that wine is made in the winery. Actually, wine is made in the vineyard,” said Shaffer, a soil culture specialist in Honaunau, Hawaii who advises grapegrowers and other farmers. “If you run down your supply of food, you will see it in your grapes. Quality goes down, the color goes down and the yield goes down.”

Earlier Sunday, Vella said his plant-based, less resource-intensive approach had its roots years before he joined Chateau Montelena in 1985. His misgivings about the soil’s future inspired him to begin a manure application program, and then to accept Shaffer’s guidance on soil management starting in the mid-1990s.

“I’d been coming here since 1976, and I’d notice that between the vine rows, the wild mustard and weeds you see there were starting to look anemic – there was very little growth there,” he recalled. “That said to me that we were seeing depletion after having this land farmed for years and years.”

Later in the tour, a dose of replenishment arrived at Chateau Montelena – on the back of a truck. Onto a gravel road rolled an aromatic, chocolate-brown load of compost, which the Recology recycling and waste collection firm had broken down in a Vacaville plant from food wastes generated by San Francisco’s homes and restaurants.

Vella quickly grabbed a fistful from the chest-high pile, taking a deep whiff of its scent – the signature of humus, the broken-down organic matter that accounts for about half the composition of fertile soil. Added to vine rows already anchored by cover grasses, the combination would hold more water close to the vines’ root zones, helping preserve them through summers marked by two seasons of drought in Napa County.

For its growing popularity, however, composting presents farmers a basic problem – a tight supply awaiting relief from more efficient diversion of food wastes.

“We have all of this food we put our best land and our best scientists to grow, and yet half of (food waste) goes to the landfill? That is an insult to our farmers!” exclaimed Shaffer.

If the supply of compost can be increased, such techniques promise a less costly and more tenable path for future farming, said Recology spokesman Paul Giusti. “If you work with Mother Nature rather than try to fool Mother Nature, it seems to work a whole lot better,” he said.

Napa County authorities reported a man missing from a group at Lake Berryessa was found drowned in six feet of water.

Second drowning in less than a week at Lake Berryessa

The visitor had been wading in waist-deep water when he suddenly disappeared, the Sheriff's Office reported.

Napa police are investigating the shooting of pit bull early Friday along a major city street.

The county wants people to stay in their household groupings as a way to avoid another economic shutdown due to the coronavirus.

Motorist sent to the hospital with major injuries.

A Napa company that runs six residential care facilities in the county will pay $225,000 in back wages to 25 employees after federal officials accused it of violating the Fair Labor Standards Act’s overtime requirements.

Bob Shaffer, an agronomist who advises the Chateau Montelena winery, describes the dozen or so varieties of cover plants that help stabilize and enrich the winery's vineyards north of Calistoga.

Dave Vella, vineyard manager at the Chateau Montelena winery near Calistoga, samples a load of compost at winery vineyards Sunday during a tour and presentation on the importance of cover-crop planting and composting to reduce the use of pesticides and fertilizer.

An array of ground-cover plants including barley and Blando brome grass fill the 8-foot-wide gaps between vine rows at Chateau Montelena outside Calistoga, providing an anchor for soil that also absorbs carbon dioxide and harbors beneficial, pest-attacking insects.