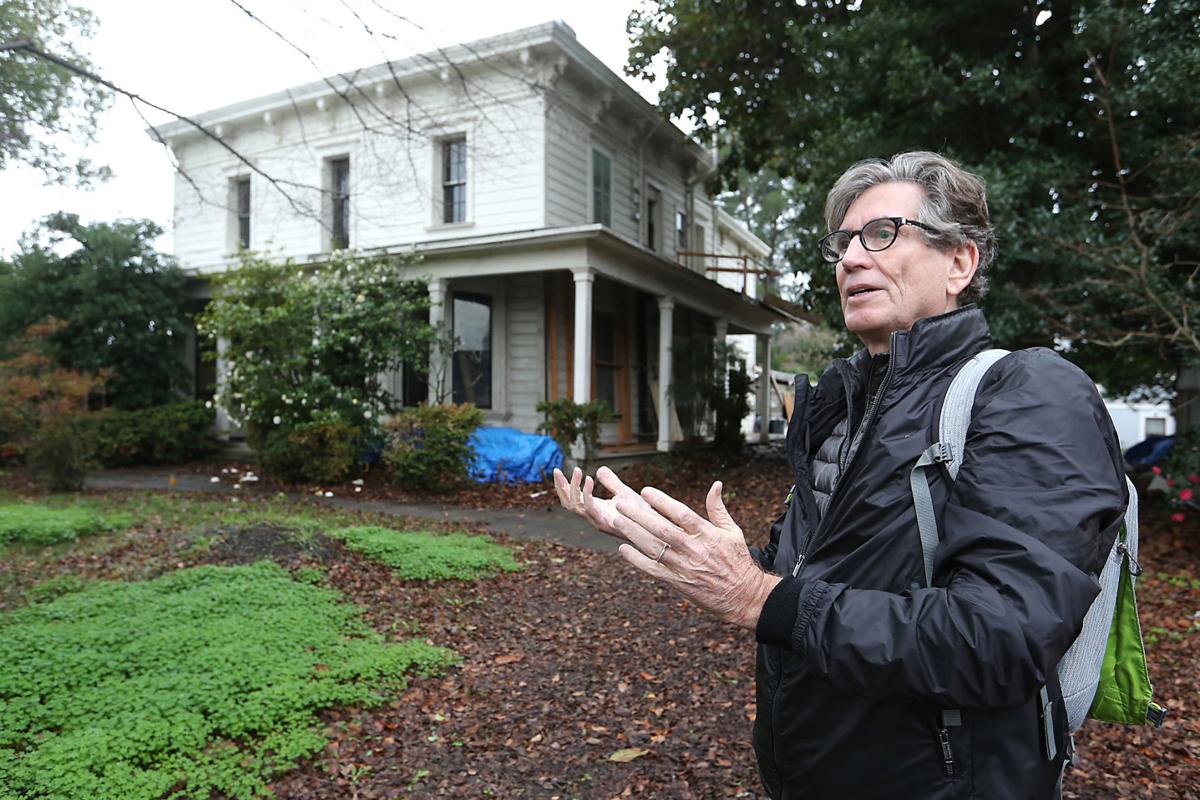 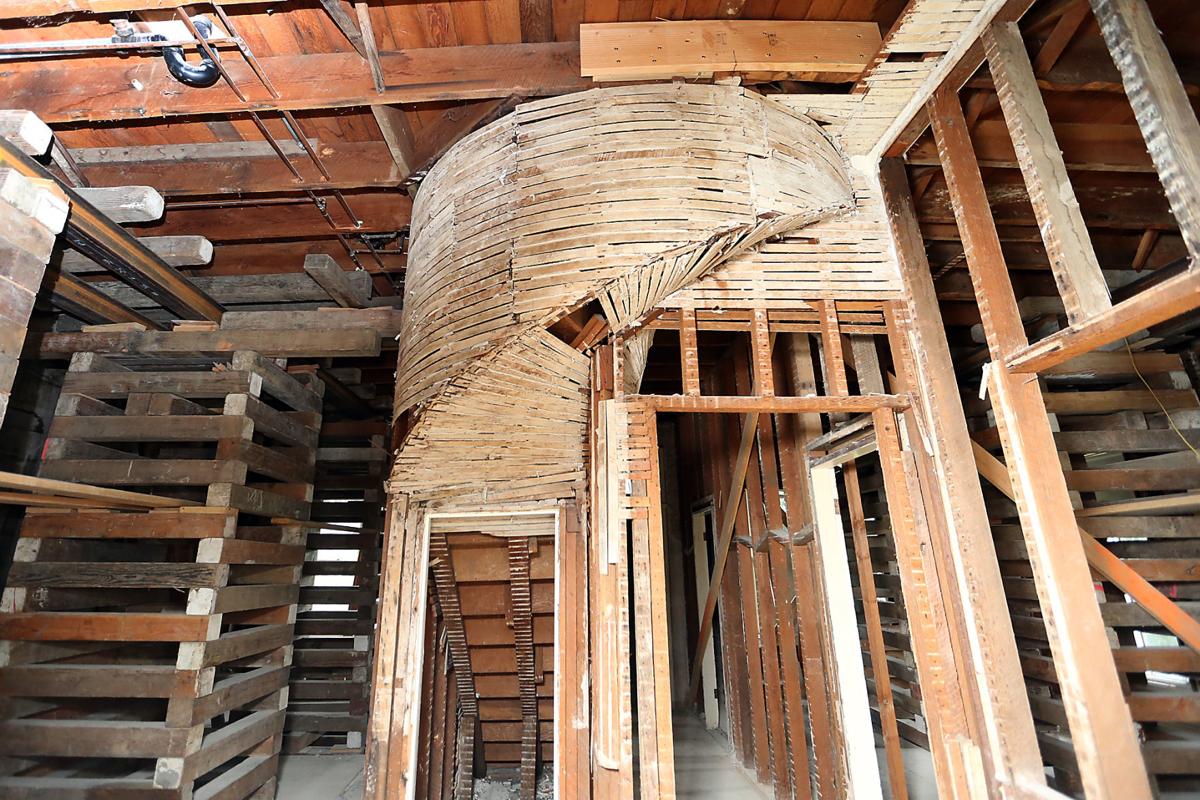 A view of the staircase in the Thomas Earl house, which owner Marc Porat is restoring. The Seminary Street home was built in 1861. 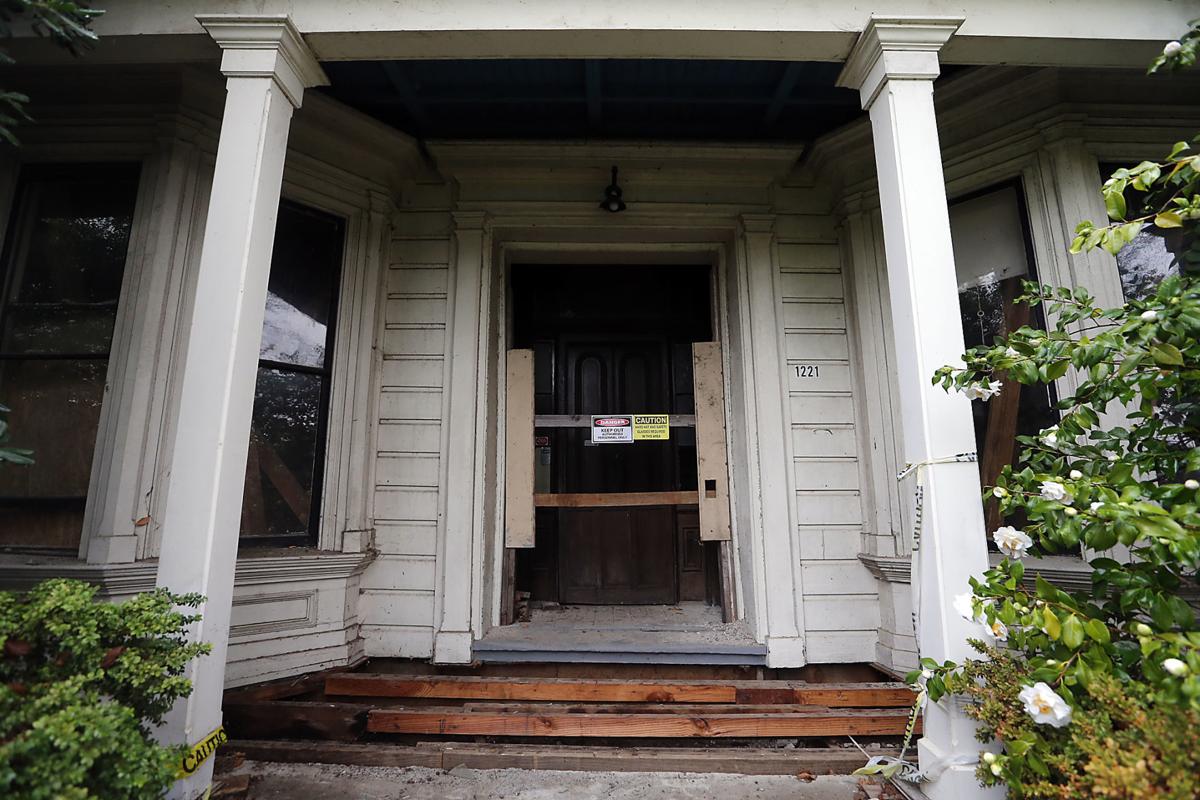 Entrance to the Thomas Earl house that owner Marc Porat is restoring. The home built in 1861. 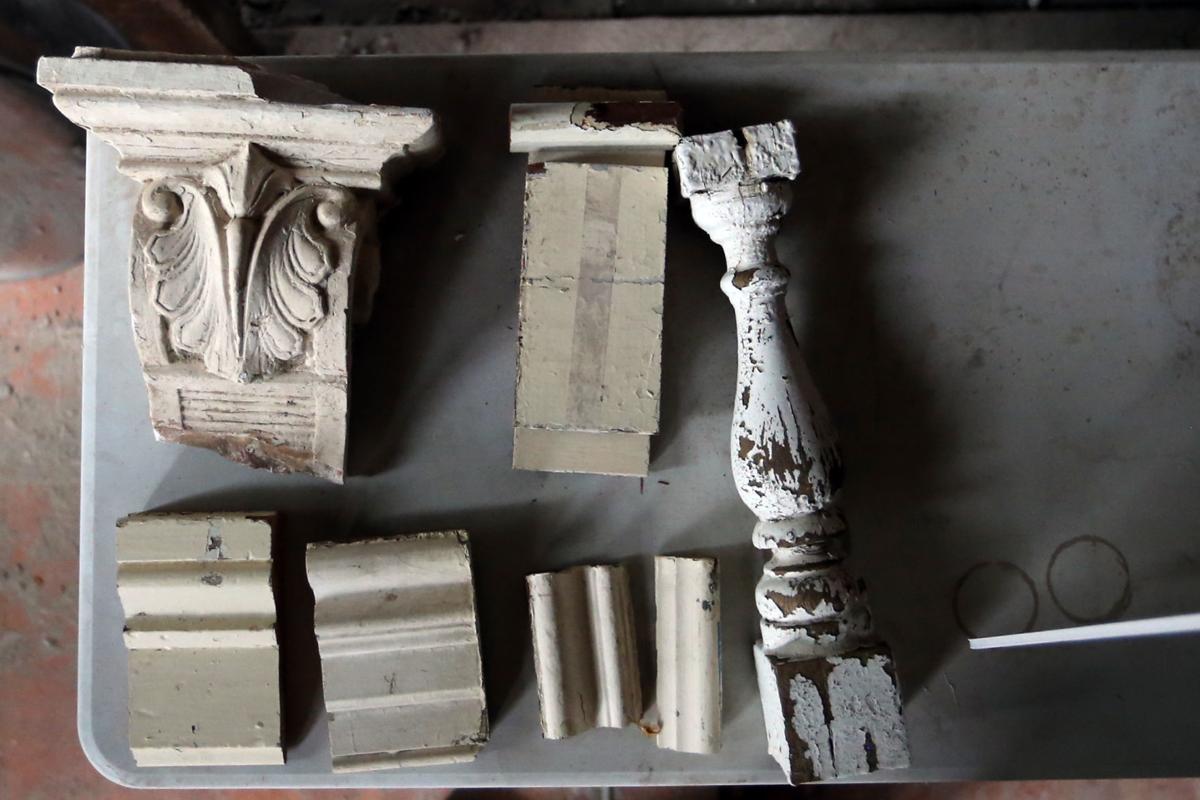 Some of the architectural details that will be repurposed and reproduced as Thomas Earl house owner Marc Porat restores the Seminary Street home that was built in 1861. 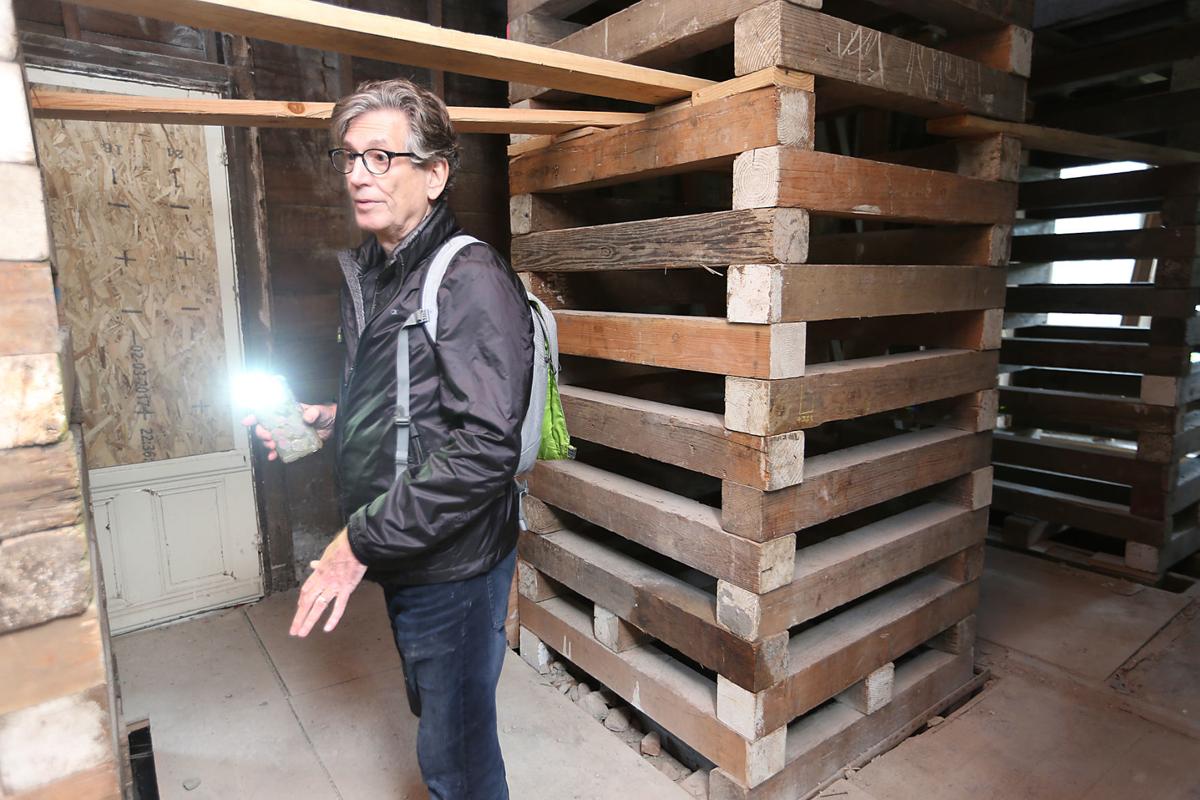 Thomas Earl house owner Marc Porat, leads a tour of the interior of the Seminary Street home, built in 1861, and discusses future plans for the home.

A view of the staircase in the Thomas Earl house, which owner Marc Porat is restoring. The Seminary Street home was built in 1861.

Entrance to the Thomas Earl house that owner Marc Porat is restoring. The home built in 1861.

Some of the architectural details that will be repurposed and reproduced as Thomas Earl house owner Marc Porat restores the Seminary Street home that was built in 1861.

Thomas Earl house owner Marc Porat, leads a tour of the interior of the Seminary Street home, built in 1861, and discusses future plans for the home.

When Marc Porat and his wife, Claire Tomkins, first saw the Thomas Earl House in downtown Napa, they were quite taken by the exterior of the historic home.

“We liked the urbanness of it” and its proximity to downtown, he said. They liked the fact that the lot, at 1221 Seminary St., was almost a third of an acre in size. And they liked the challenge of preserving the historic home while adding modern sustainable features and technology.

However, once he saw the inside, Porat admitted he had second thoughts.

The home’s 21-inch thick walls made of an early form of concrete had crumbled into a pile of rubble, he said. The house was falling apart — the walls divided and detached from each other. It was yellow-tagged by the city.

“The project seemed economically irrational to continue,” he said.

Yet after much consideration, in March 2017 Porat and Tomkins bought the property from a longtime owner for $700,000 and began refining plans to rescue it.

Built in 1861, the Italianate “mansion” is one of Napa’s earliest estate homes and is located across the street from Blue Oak School. The house, listed on the National Register of Historic Places, was built for Thomas Earl, a former Napa city marshal. Porat and Tomkins are reportedly only the home’s third owners.

Today, they’ve asked the city for permission to redevelop the home and property into a “world-class” residential business retreat and professional meeting place “for critical thinking and discovery.”

“We are driven by a vision of what could take place here” and the breakthrough ideas the users of the space may generate, said Porat.

The intention is “to create a unique residential destination for professional and executive meetings that value exclusivity, privacy and a focus on thought and work as well as comfort and wellness.”

They’re asking for a bed and breakfast use permit from the city, but instead of leisure travelers, only a single group of people will use the Thomas Earl property at a time, according to the application.

Primary users would be Silicon Valley companies and other high-tech and STEM (science, technology, engineering and math) sources, according to the application.

Porat and Tomkins, who have three young children, live in San Francisco.

In online profiles, Porat is described as a tech entrepreneur and investor. Tomkins is the founder and CEO of Future Family, a startup helping women and couples navigate fertility.

When not rented – an estimated 30 to 35 percent of the time —“It will be a treasured retreat for friends and family,” said Porat.

According to the application, the home will be relocated 10 feet closer to Seminary Street and completely rehabilitated. A new addition will be built onto the rear of the house. Two new cottages will be built to flank the house and a carriage house added at the northwest corner. In total, the project would include 10 guest rooms, a large basement, five meeting rooms, a manager’s unit, parking, a pool and spa.

Some trees will be removed and replaced with as many as 40 new trees – mostly Italian Cypress – “creating a wooded oasis.” New fences would be installed around the parcel.

The project will take more than 18 months to complete, according to the application. Phase 1 work includes rehabilitating the residence in a historically accurate manner. Phase 2 would be to create the residential retreat components.

In addition to the purchase price, the entire project could cost as much as $5 million, but “hopefully less,” said Porat.

According to Napa city planner Elena Barragan, city staff will review the project as soon as the week of Jan. 14. After that, the item will be reviewed by the Cultural Heritage Commission for preliminary feedback.

The project will ultimately be reviewed by city’s Cultural Heritage Commission, Planning Commission and City Council for approvals, said Barragan.

Who was Thomas Earl?

According to its National Register listing, Thomas Earl was born in Ontario, Canada in 1825. Orphaned at the age of 6, he learned the harness and saddlery trade.

He moved to the United States in 1840. In 1851, he came to California to try his luck in the gold fields. He soon moved to Napa and opened a saddlery business in 1851 when the town had about 200 residents and only a few permanent buildings.

By 1861, Earl's real estate projects were so profitable that he sold his saddlery business. From then on, Earl promoted the general welfare in Napa County through a series of positions including city marshal.

He married Frances Montgomery and they had five children.

Earl is remembered as one of Napa's founding fathers and one of the most influential people in the formation and growth of the city.

Earl reportedly died on Jan. 14, 1893. He was 67. He is interred at Tulocay Cemetery in a family mausoleum.