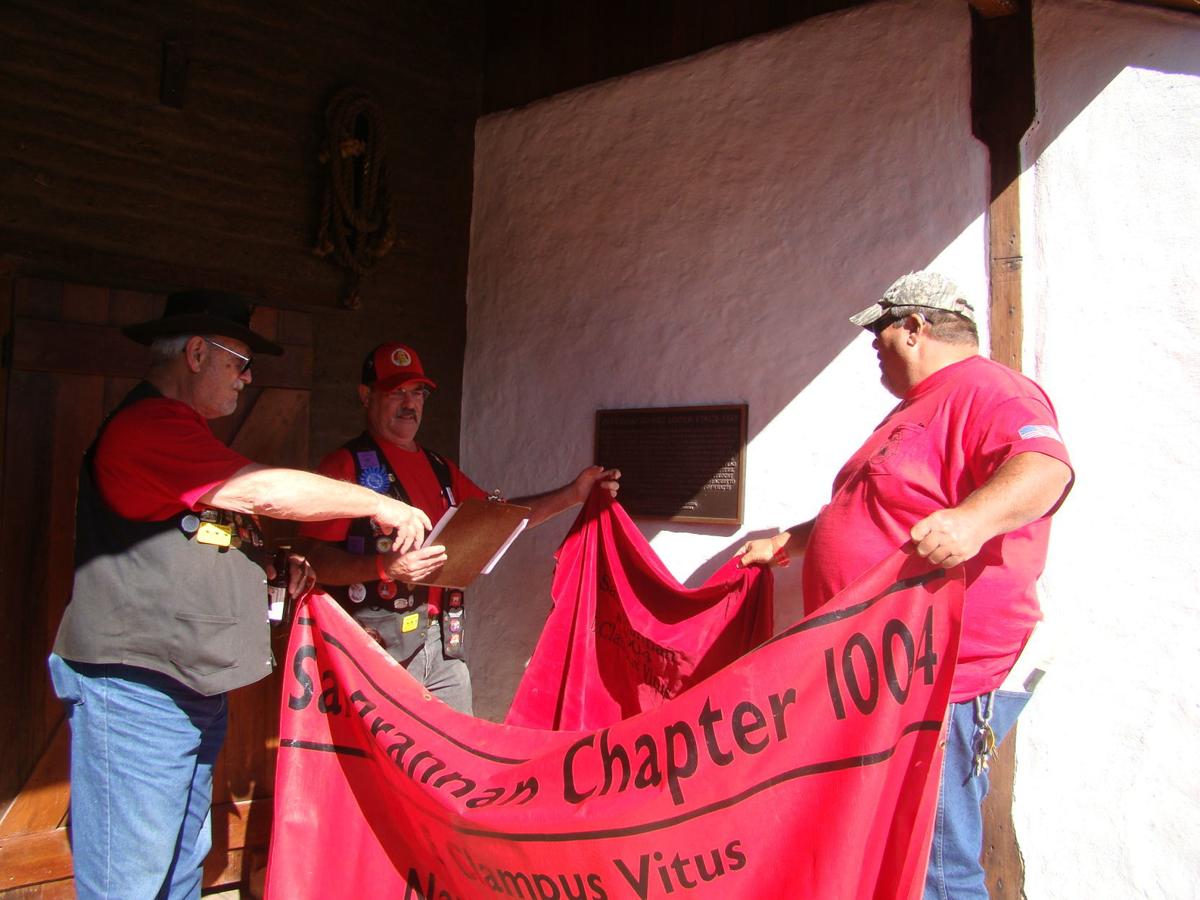 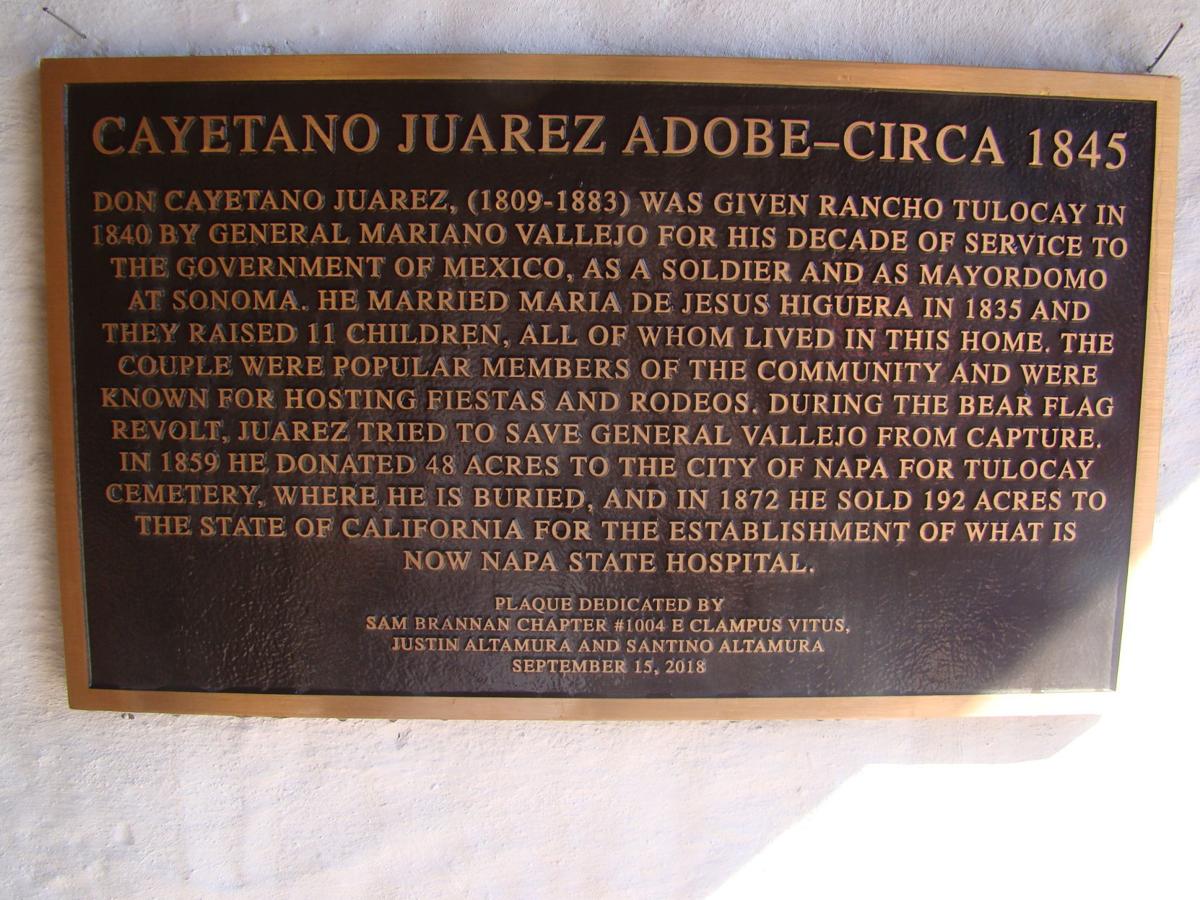 This is the plaque that now rests to the right of the main entrance at the Old Adobe in Napa. 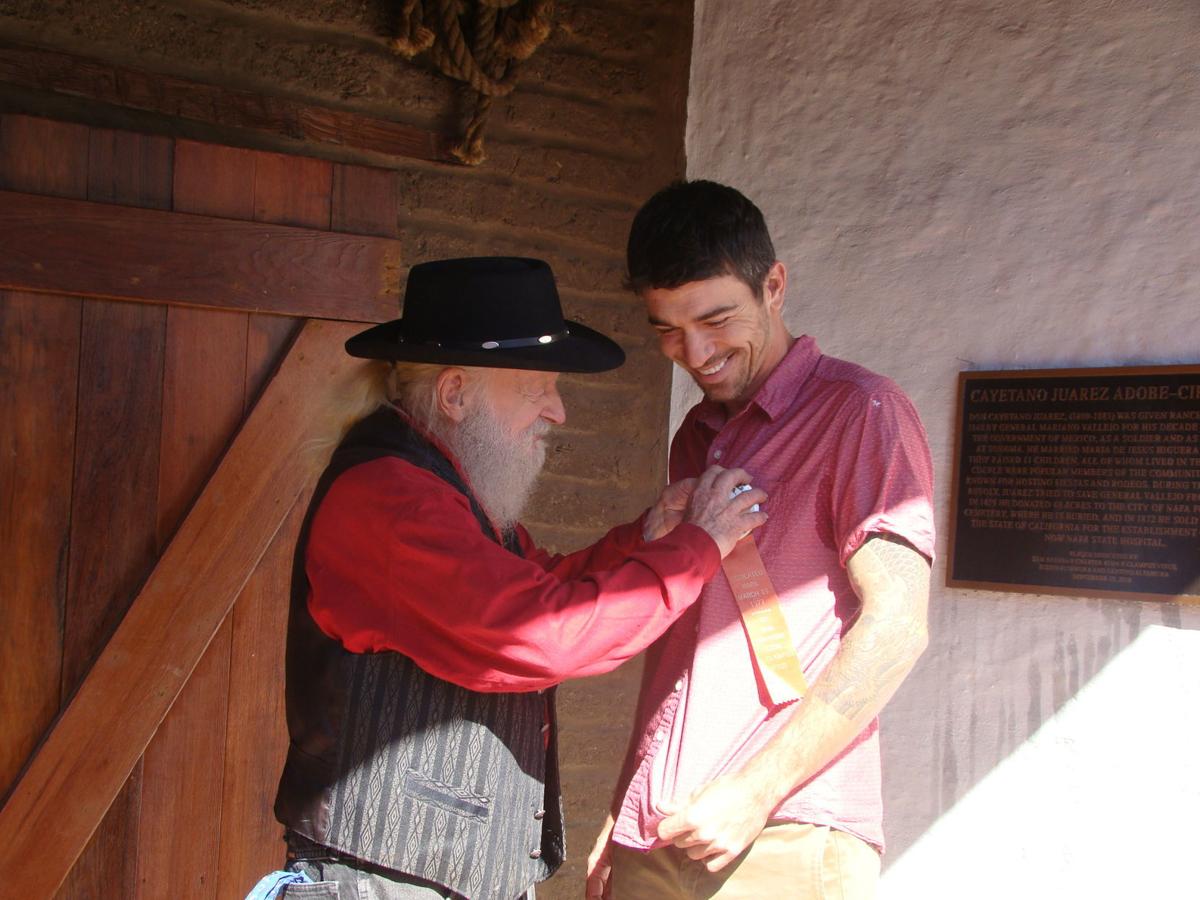 This is the plaque that now rests to the right of the main entrance at the Old Adobe in Napa.

At 10:04 a.m., it was time to break out the beer as members of the Sam Brannan chapter 1004 of E Clampus Vitus gathered in Napa on Saturday to celebrate the restoration of the Old Adobe.

The fraternal organization dedicated to the study and preservation of American West history honored the Napa structure 42 years ago, but the commemorative plaque went missing somewhere along the way and seemed to be lost to history.

Luckily, members of the Sam Brannan chapter 1004, also known as Clampers, are always up for a celebration. When members of the organization learned property owner Justin Altamura intended to restore the building to its historical roots, a project he’s been working on for the past two years, they knew they needed to host a rededication for the historical building.

“Our organization is steeped in history,” said member Bob Proctor. “This is one of two adobe buildings still standing, and what Justin has done here is outstanding. Not only has he and his team restored this building, but they’ve done so in a historical manner by making new adobe style bricks just like they had when this place was originally built. This is a very special place, and that’s why we wanted to rededicate the building.”

A metal plaque was unveiled to a group of approximately 30 E Clampus Vitus members, and Altamura was presented with a special pin which was given to members during the first dedication more than 40 years ago.

“I’ve been looking forward to this day,” said Altamura. “They have such an appreciation for history and celebrating local history, so it is a true honor to have them here.”

The jovial band of brothers toured the Old Abode and listened to Altamura’s plans for the future. He said he’d like the Old Adobe to be a bar or lounge, and he’d like the buildings across the parking lot to be a restaurant.

Cheers erupted from the group when they heard of Altumara’s intentions to open a bar as the group is known for incorporating alcohol into its celebrations, including the event held Saturday morning.

After Grand Noble “Humbug” Andy Olsten read the message of the plaque to the group, he ceremoniously poured beer over the plaque, which is standard practice for the group’s historical presentations.

Ed Hawkins, who is the chapter’s original Grand Noble Humbug, lived in Napa in the 1940s and has great memories of the Old Adobe in its heyday.

“I remember when this place was a bar and restaurant,” Hawkins said. “It was a booming place. It was always packed. To see the attention to detail these young men have taken to restore this place, it’s absolutely wonderful. There are still a lot of memories to be made here.”

Altamura said he’s been actively pursuing a tenant for the building, but nothing has been finalized yet.

“Inch by inch and piece by piece, we slowly attacked this place (to restore it), and honestly, the last two years working on this have been the best years of my life,” he said. “I’m waiting for the right person. I can’t just turn it over to anybody. It has to be the right fit.”

This is the message on the plaque that was dedicated to the Old Adobe in Napa:

Don Cayetano Juarez (1809-1883) was given Rancho Tulocay in 1840 by General Mariano Vallejo for his decade of service to the government of Mexico, as a soldier and as mayordomo at Sonoma. He married Maria de Jesus Higuera in 1835 and they raised 11 children, all of whom lived in this home. The couple were popular members of the community and were known for hosting fiestas and rodeos. During the Bear Flag Revolt, Juarez tried to save General Vallejo from capture. In 1859, he donated 48 acres to the City of Napa for Tulocay Cemetery, where he is buried, and in 1872, he sold 192 acres to the State of California for the establishment of what is now Napa State Hospital.

There was so much history at the Old Adobe, and so little time left for its builder’s descendant to return to it.