A steamboat on the Napa River. 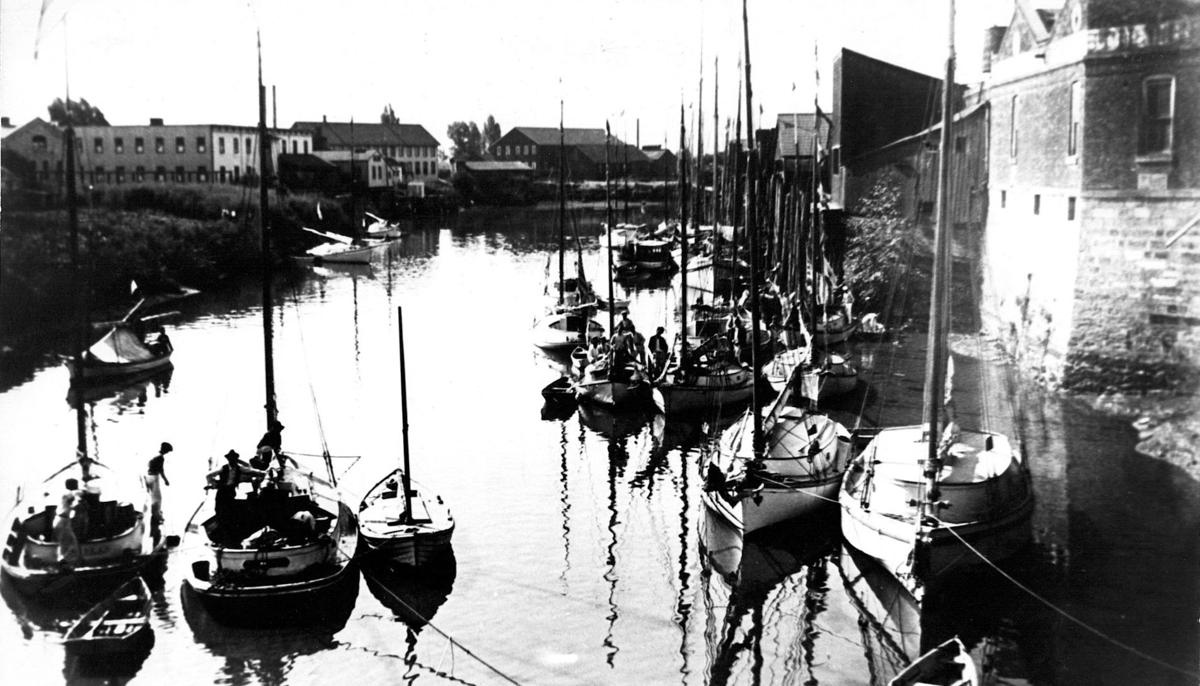 Sailboats on the Napa River on a long-ago July 4,

A view of river boats from the Third Street Bridge in Napa.

Along Napa’s riverfront are numerous buildings that harken back to the waterway’s heyday as the transportation and commerce hub of not only Napa but also the entire county.

Some of these buildings were the homes of those who piloted the local steamships while others housed places of commerce and even the local militia. This vital waterfront was also the site of grand promenades, such as Independence Day parades as well as present-day walking tours.

The residences located in Napa’s Old Town, or Abajo district is known to have been the homes of riverboat captains are within a block or so of the Napa River. Three of these homes are Brown Street neighbors.

A truly unique residence is the Riverboat House at 538 Brown St., built to conform to its triangular lot. In 1910, Captain Otto Walton and his family — wife Marie and daughters, Gladys and Vivian — called the second story of this vernacular-style dwelling their home. Supposedly, Walton kept a riverboat on the first-floor space of this house.

Across the street, at 549 Brown St. is the Italianate-style residence built in 1880 where Captain N.H. Wulff, Sr. lived.

Many historians describe Wulff as a progressive or visionary man for his time. Apparently, Wulff recognized the local wheat and flour industries as thriving businesses needing reliable transportation services.

Wulff successfully fulfilled that need as he became one of their primary shippers. In addition to recognizing commodity trends, Wulff also recognized the mode of water transportation was soon to change from sails to steam-powered engines. As a result, Wulff quickly divested himself of his sailing crafts in favor of steamships.

Just down the street is Captain George Grafton Pinkham’s residence. Built in 1880, also in the Italianate architectural style, it is located at 529 Brown Street. Pinkham, although he endured his share of setbacks, was quite successful. In 1891 he commissioned the building of the 178-ton Napa City vessel. Providing a much-needed passenger — freight service between Napa and San Francisco — the Napa City netted several hundred dollars in profit during its first month of operation for Pinkham.

A fourth captain’s house was originally located on Brown Street behind the Manasse mansion. However in 1883 German-born Captain Harry H. (originally Franz H.) Hammerich purchased and then moved the Gothic Revival style house to 482 Cross St. to be the home for himself and his six children.

Being quite familiar with the Napa River’s propensity for flooding, Hammerich selected a river-view parcel on a small knoll. This slight rise in elevation afforded his home a bit more protection from flood damage. As for his profession, Hammerich owned and piloted the Cinderella. This schooner, while carrying 34,000 feet of lumber as well as other cargo, plied the waters between Carneros and the Sacramento River areas.

The final Old Town captains’ residence is the Captain Andrew Sampson house at 1157 Division St. The house had a long association with the Sampson family as well as varied history.

Sampson, a Swedish immigrant, became a U.S. citizen in 1858. Sadly, that same year his first wife Annie (daughter of Captain Wulff) passed away leaving Sampson to care for their two young sons, James and Charles.

Typical of that era, Sampson remarried to provide a mother figure for his sons. Hailing from the UK, Olinda Grover ably nurtured not only the Sampson boys but also Andrew and her daughter Laura who would be the last Sampson to reside in the family homestead.

During the Sampsons’ residency, their home was significantly altered around 1900. The original one-story cottage portion of the dwelling was lifted to allow for a new first floor to be built beneath the original circa 1858 cottage, now the second floor. Also during their occupancy, Olinda had the two existing Sequoia trees planted in the front yard during the 1870s.

An interesting bit of local history, or possibly historical lore, intertwines Sampson’s professional and personal lives. As a riverboat captain, Sampson transported barrels of wine produced at his neighbor’s business, Migliavacca Wine Company. Also, it is said, during Prohibition when Migliavacca was permitted to produce only sacramental wines, those small lots were supposedly bottled in the Sampson’s kitchen.

A short distance from the Migliavacca winery and Sampson house was the Hatt warehouse set alongside the western banks of the Napa River. Established by Captain Albert Hatt, Sr. in the late 1800s, the complex is now known as the Hatt-Napa Mill- Napa River Inn property.

When he built the first two buildings of his complex, the second floor contained Hatt Hall and a skating rink. Years later, Hatt Hall became the armory for the local National Guard unit. His son, Albert, Jr., was a member of that unit originally known as Battery B, then eventually Company H. Albert, Jr. would eventually attain the rank of second lieutenant.

Prior to his promotion, an 1894 Napa Register article verified his involvement with Battery B.  “Two of the division’s corporals, Frank W. Bush and Albert Hatt, Jr. visited Napa briefly during a 20-hour leave.”

According to the Register, Bush, Hatt, and their fellow Battery B comrades were called to duty to disperse the labor strikers rioting in Oakland, California. These citizen-soldiers endured harsh conditions such as only four hours of sleep, straw to sleep on, and rations of bread and bacon as well as dealing with the hostile strikers.

But about a year later, July 1895, the tone of another Register article was quite different. “A joint committee of the Napa Military Band and Battery B has decided upon an attractive program for the Fourth.”

Napa History Walk with the Mayor

Tickets are $10 for the general public or $5 for NCL members and are available on the day of the event. Due to the popularity of this tour and its guide, advance purchase is recommended. For tickets,  visit, napacountylandmarks.org/riverfront-captains-mansion-district-tour/ or call 707-255-1836 for more information.

The rebels who instigated the Bear Flag revolt in California in 1846 eventually became illustrious, powerful and wealthy men. There was one exception, however; he was Peter Storm.

The long list of Napa County authors begins with James Clyman, a frontier scout and pioneer who kept a journal about his experiences in the western territories.

What happened to the onion dome that originally topped the Napa Courthouse? Why did the man who helped create and pay for the Napa Valley Opera House decline to attend its opening? Historian Rebecca Yerger delves into these and other Napa mysteries.

A steamboat on the Napa River.

Sailboats on the Napa River on a long-ago July 4,

A view of river boats from the Third Street Bridge in Napa.