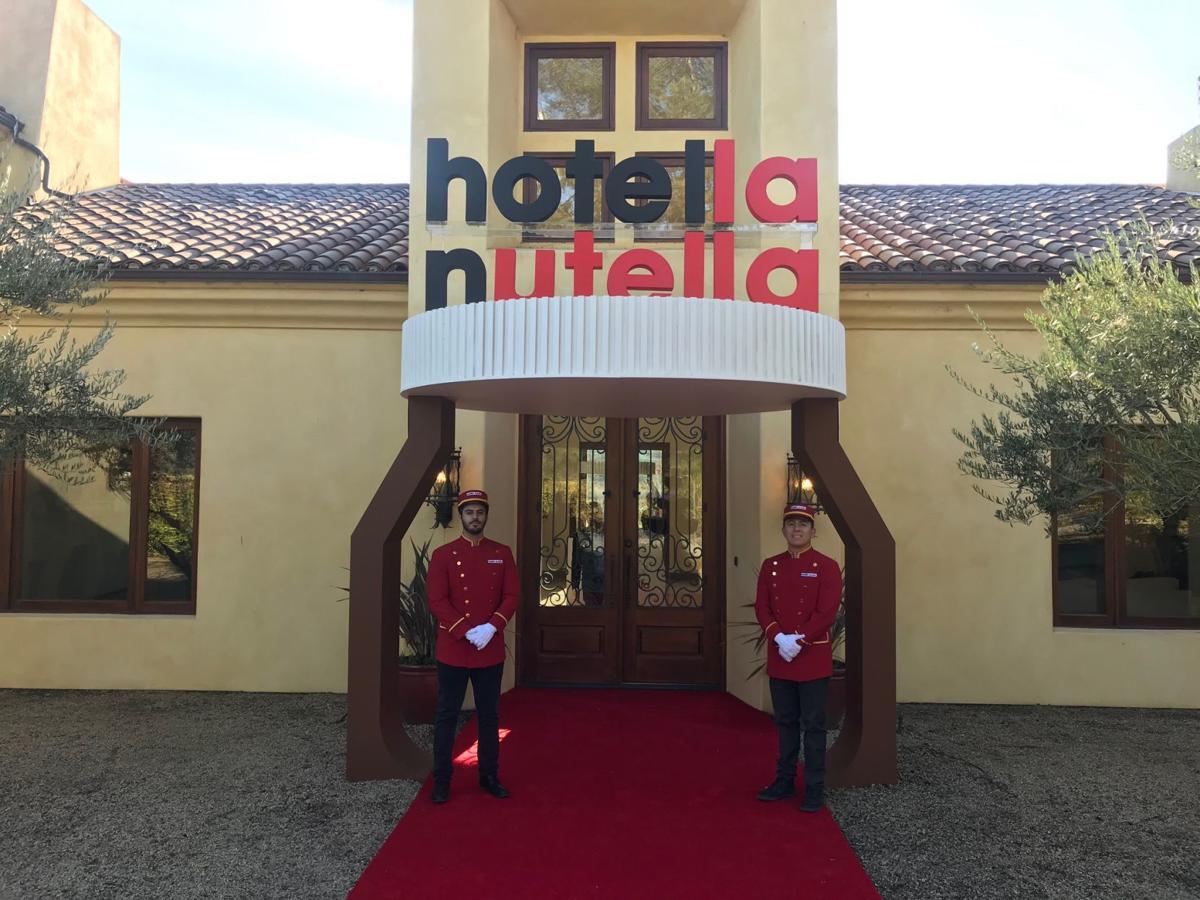 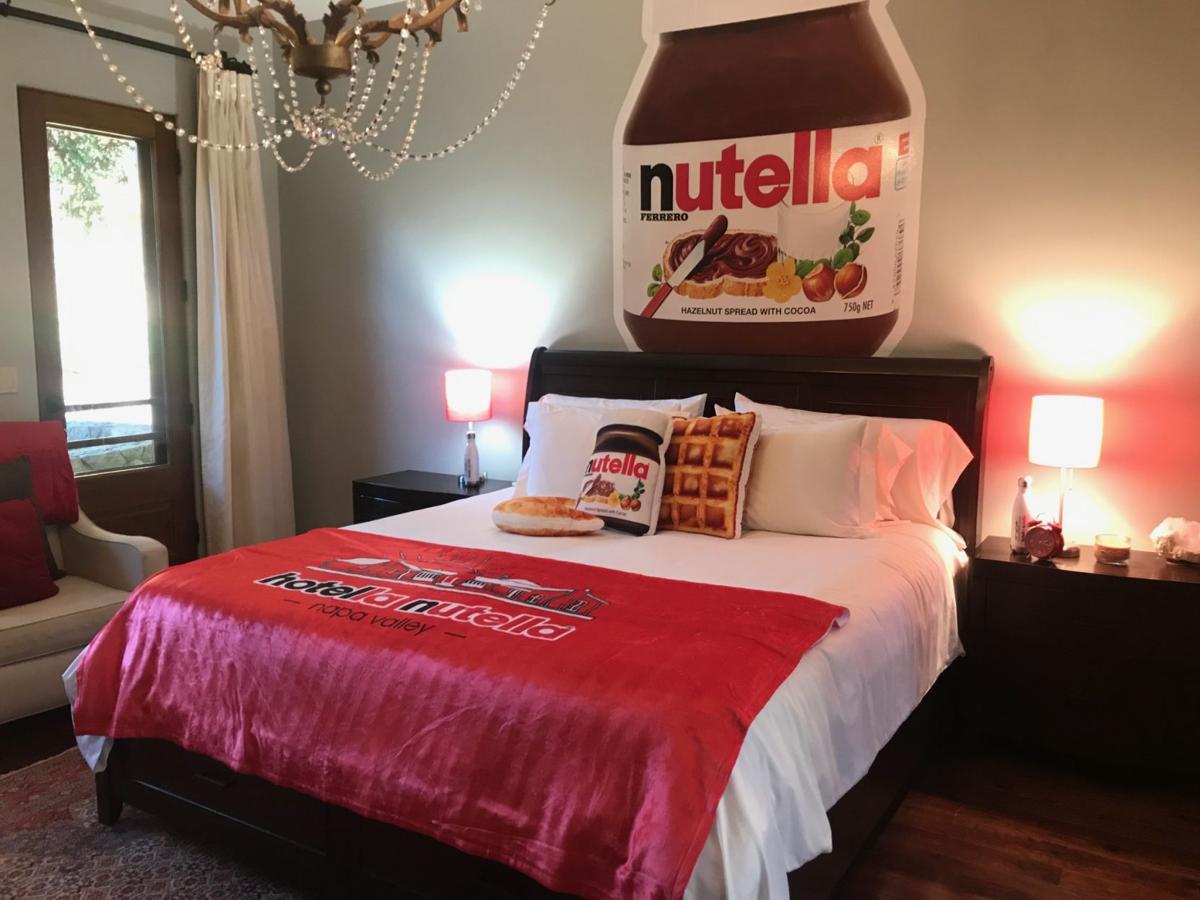 Hotella Nutella, a pop-up Napa Valley experience, hosted 16 overnight guests this past weekend. The "hotel" was decorated in all things Nutella, and guests dined on Nutella-themed foods. 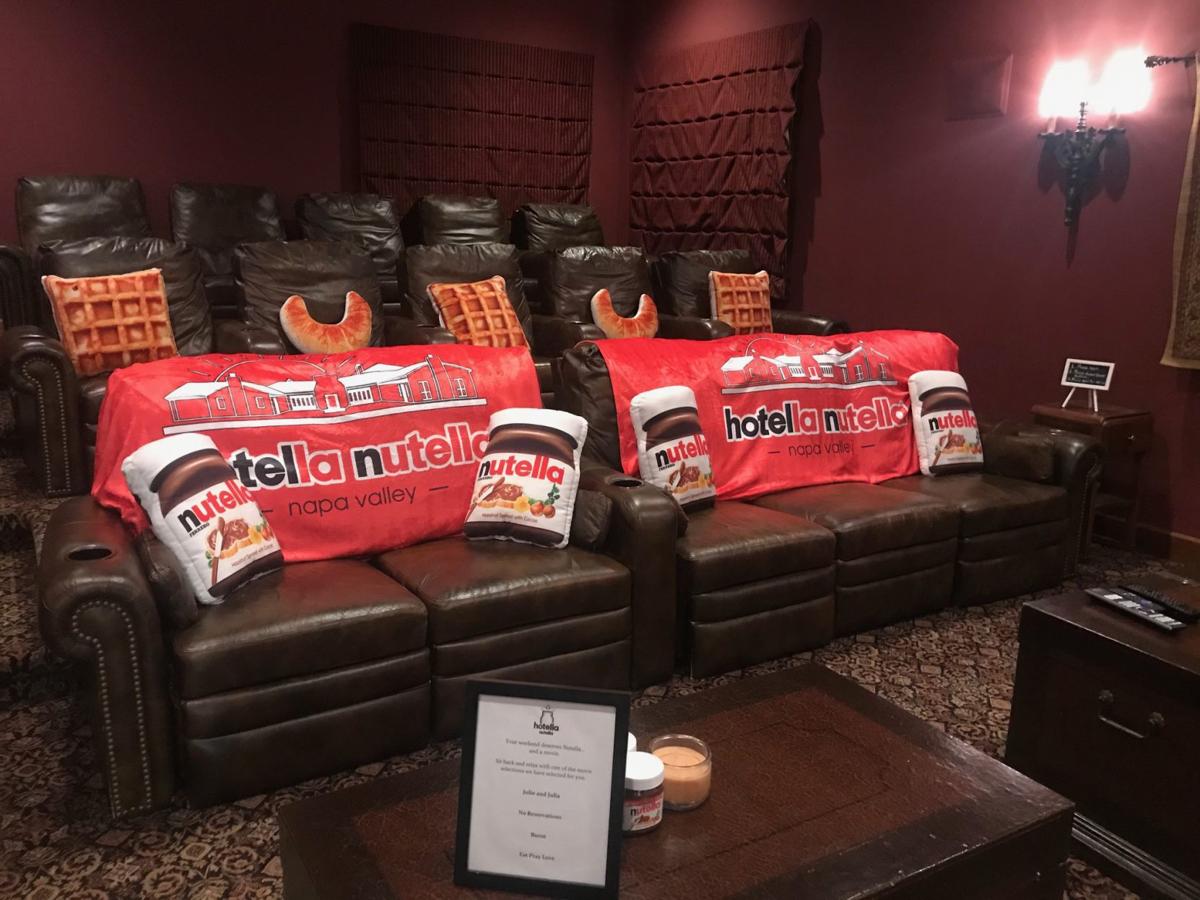 A movie viewing room inside the Silverado Trail mansion that became "Hotella Nutella" over the weekend. 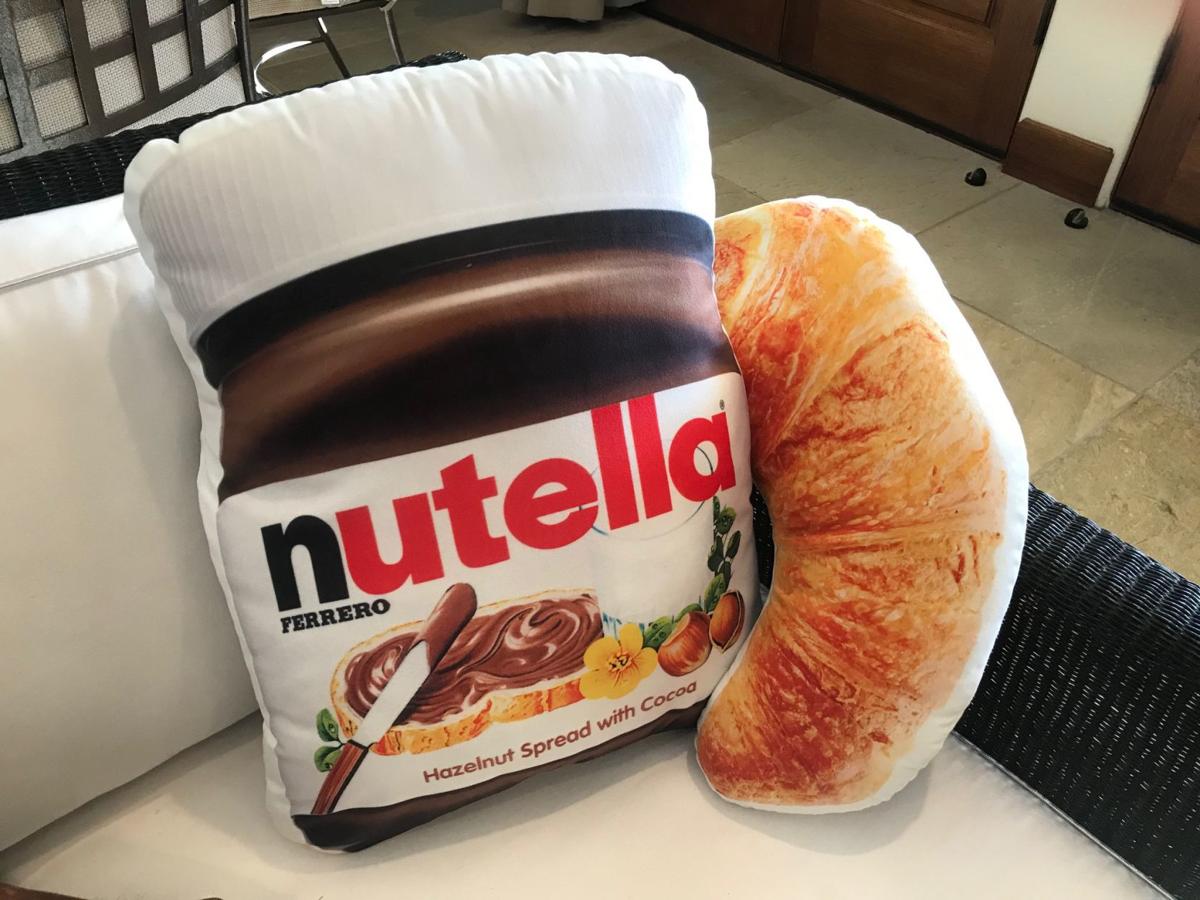 Hotella Nutella included these photo pillows of a Nutella jar and croissant. 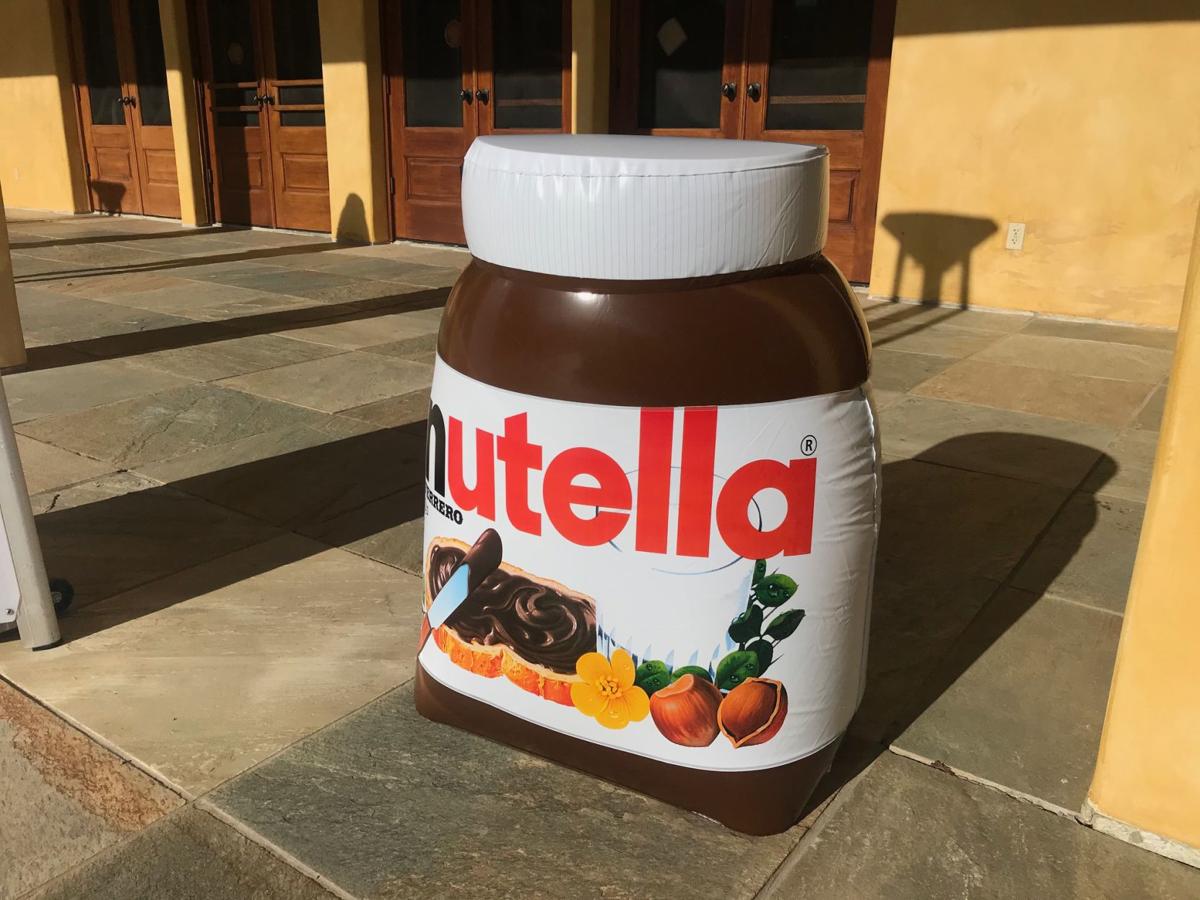 A larger than life, inflatable jar of Nutella was on display at the temporary Hotella Nutella in Napa Valley this past weekend.

Hotella Nutella, a pop-up Napa Valley experience, hosted 16 overnight guests this past weekend. The "hotel" was decorated in all things Nutella, and guests dined on Nutella-themed foods.

A movie viewing room inside the Silverado Trail mansion that became "Hotella Nutella" over the weekend.

Hotella Nutella included these photo pillows of a Nutella jar and croissant.

A larger than life, inflatable jar of Nutella was on display at the temporary Hotella Nutella in Napa Valley this past weekend.

A sweet, yet nutty, “hotel” popped up in Napa Valley this past weekend, offering a fantastic spread made to order for 16 lucky overnight guests.

Named Hotella Nutella, the chocolate-themed accommodation was the grand prize of a contest hosted by – you guessed it — Nutella.

After submitting videos touting their love and devotion to the hazelnut chocolate spread, three contest winners and their guests received a three-day and two-night stay at the temporary hotel. Ten other guests, including social media influencers and VIPs were also invited to spend the night.

According to the contest, first announced in November, Hotella Nutella Napa Valley, is a “first-of-its-kind, weekend getaway experience dedicated to the beloved hazelnut spread.”

The “hotella” is actually a private mansion located between Calistoga and St. Helena on Silverado Trail.

Over the period of several days, it was transformed to feature larger-than-life jars of Nutella and breakfast decor, and hazelnut and cocoa spread-inspired hotel items.

“The ultimate weekend breakfast experience” was created for the winning fans “to take their passion for Nutella to new heights,” said a Nutella news release.

“It’s about finding fun and exciting ways to engage with our fans,” said Shahrukh Mehta, director of marketing for Nutella USA.

The company chose Napa Valley because it’s known as a culinary destination, he said. Plus, “It’s beautiful.”

Mehta said between 100 and 500 people submitted videos for the contest. “What’s really exciting was the amount of passion and excitement” the super fans shared for the nutty spread. “It was really difficult to choose” the winners, he said.

A media tour of the hotel took place on Friday, before the guests arrived, so winners weren’t available to be quizzed about the extent of their love of Nutella. However, based on brief excerpts from their contest entry videos, they certainly do seem to be nuts for Nutella.

In one video, one contest winner wears a handmade, life-size Nutella jar costume while kissing a framed photo of Nutella.

A second contest winner shared a video of her boyfriend’s marriage proposal while sitting next to a cake shaped like a Nutella jar.

And from the looks of last weekend’s “hotel,” all of their Nutella dreams would come true.

Inside, a reception “desk” built in the shape of a giant Nutella bottle awaited the guests. Each received a key to their room on a Nutella keychain.

Hundreds of containers of Nutella decorated fireplace mantels, dining room, coffee and kitchen tables, counters and all other surfaces.

The kitchen featured a giant lighted Nutella sign and even more jars of Nutella.

“We have enough Nutella here to make even the most passionate fan happy,” said Mehta.

There were also Nutella cookbooks, robes, and towels featuring the Nutella logo. Even the toilet paper had a Nutella sticker on it. Original Nutella “art” was on display.

Other meals scheduled were a “savory soul food brunch” with the chef, TV personality and owner of Brown Sugar Kitchen Tanya Holland and “pancake art” with Dancakes the talented pancake artist team, who performs live pancake art around the world.

For those wondering, Nutella is a European breakfast spread created in 1964 that has become popular around the world.

In 2018, brawls reportedly broke out among shoppers after French supermarkets discounted jars of the sweet stuff. It gradually made its way to America, where it has won loyal fans, particularly among millennials.

A “Hotella Nutella” will open Calistoga from Jan. 10 to 12. Readers can enter to win a stay at the Nutella themed hotel.