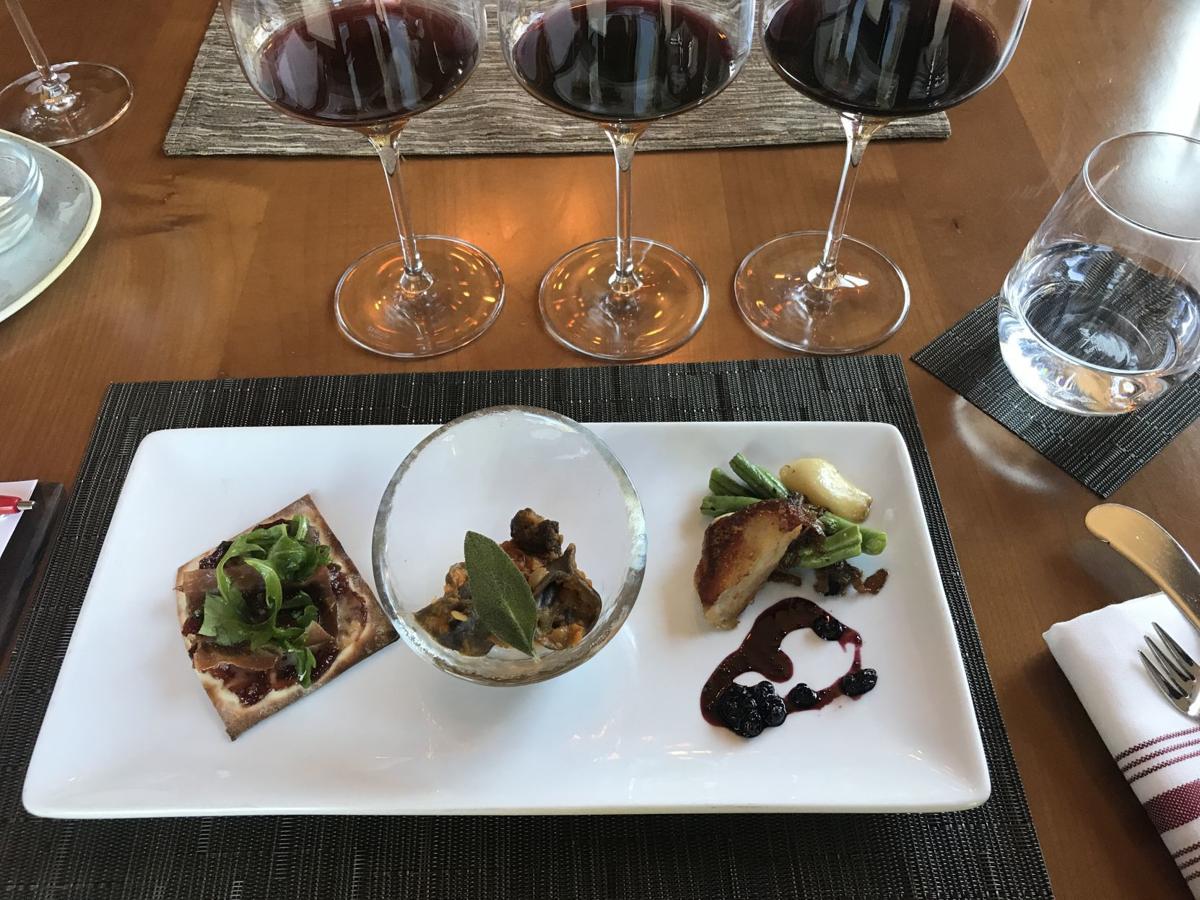 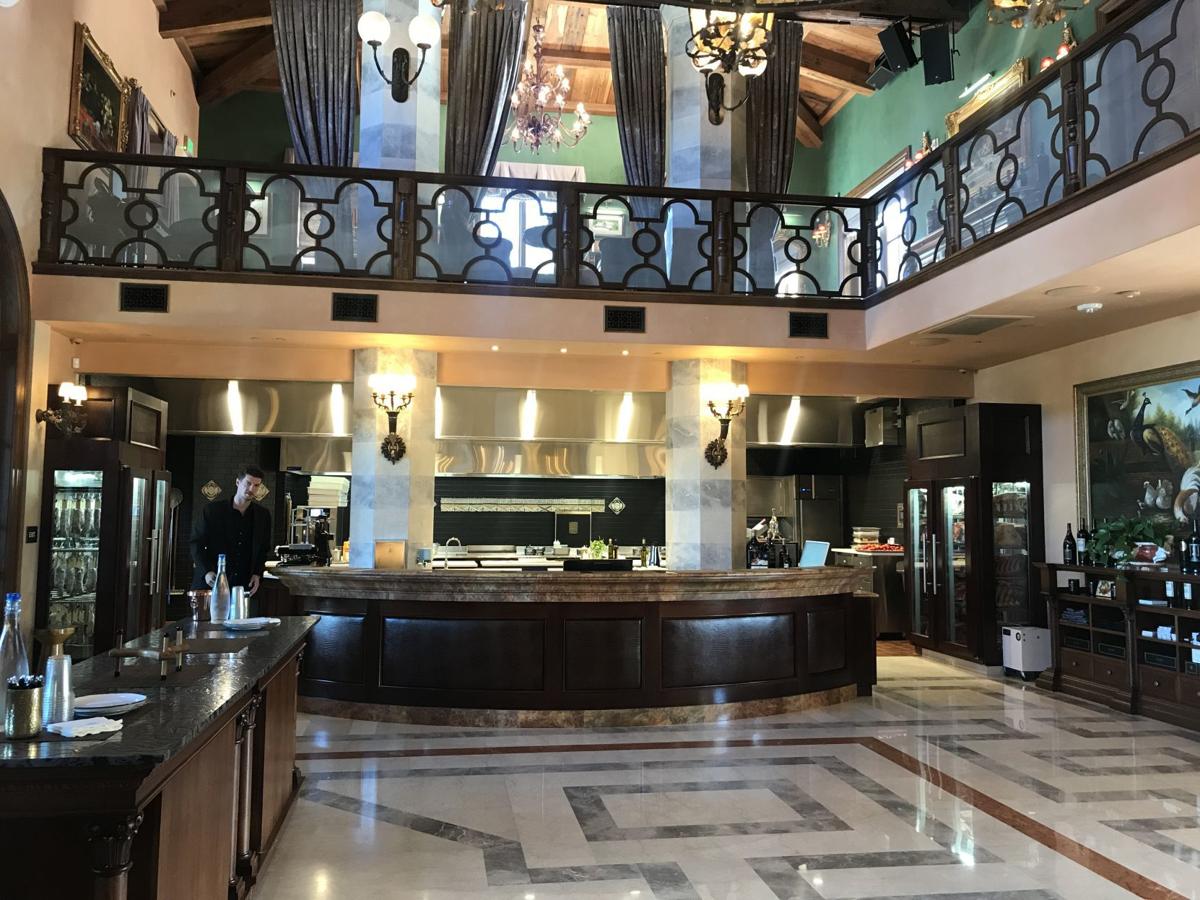 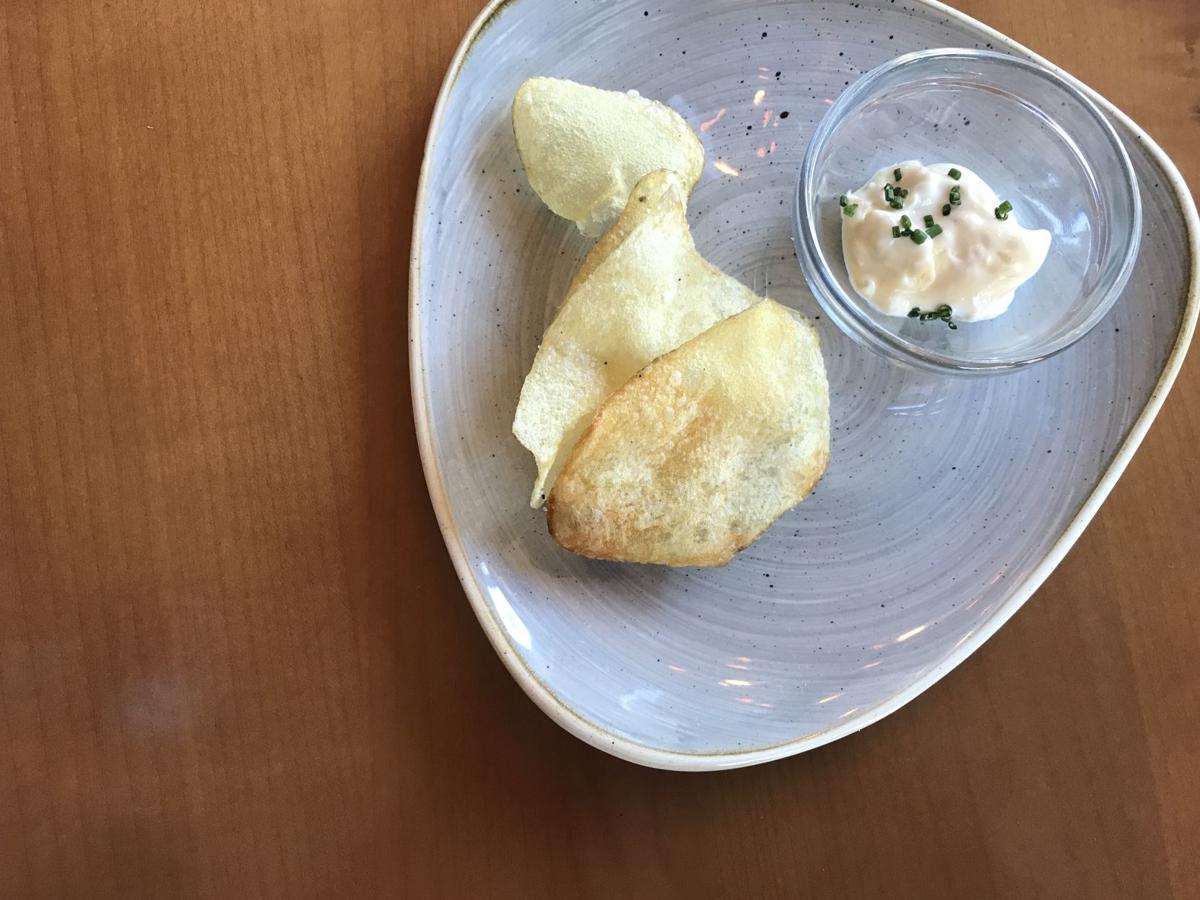 B Cellars' truffled potato chips and french onion dip, to be paired with Chardonnay as part of one of its tasting menus. 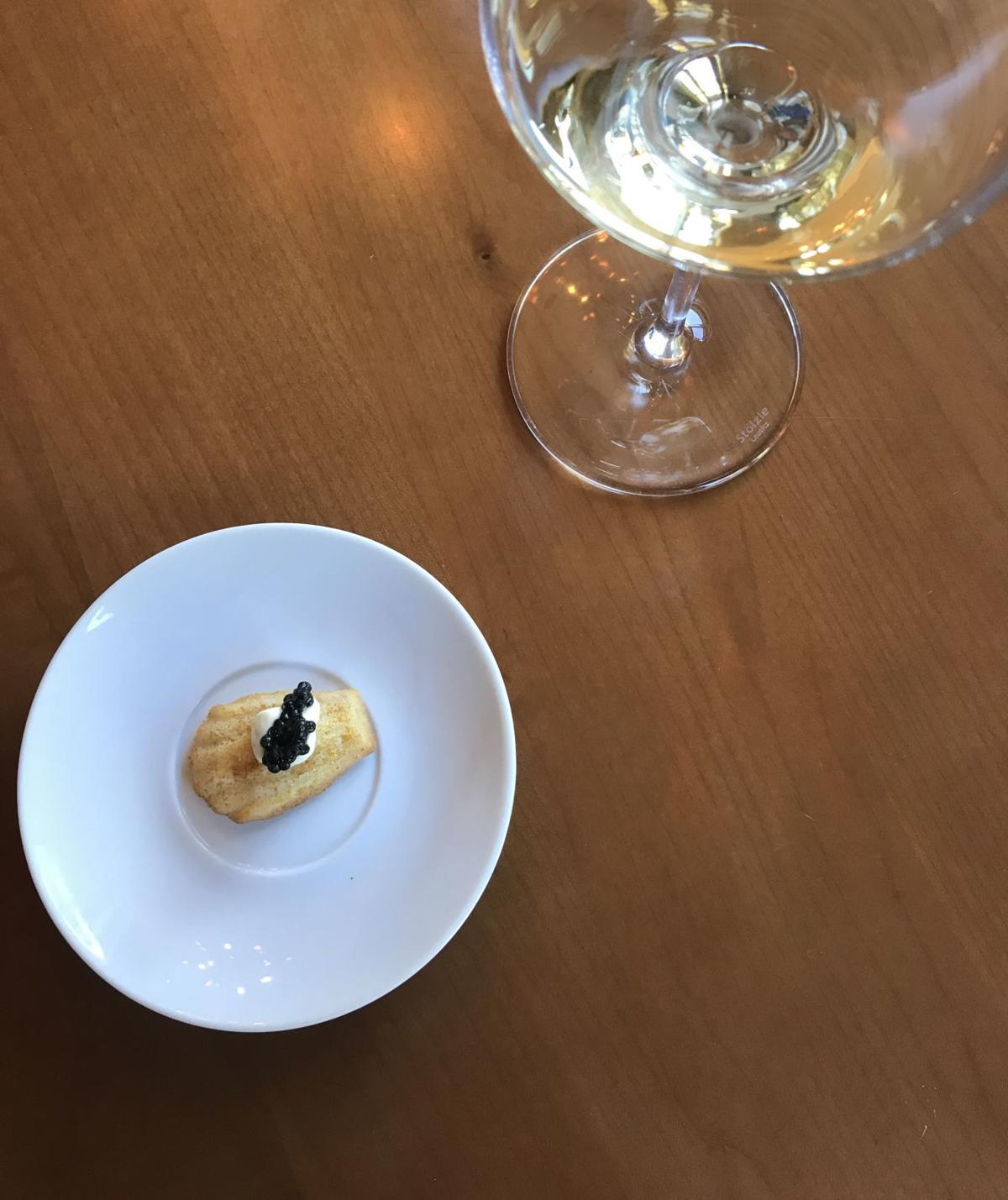 B Cellars' sweet corn madeleine, paired with its 2018 Blend 23, also pictured, as part of one of its tasting menus. 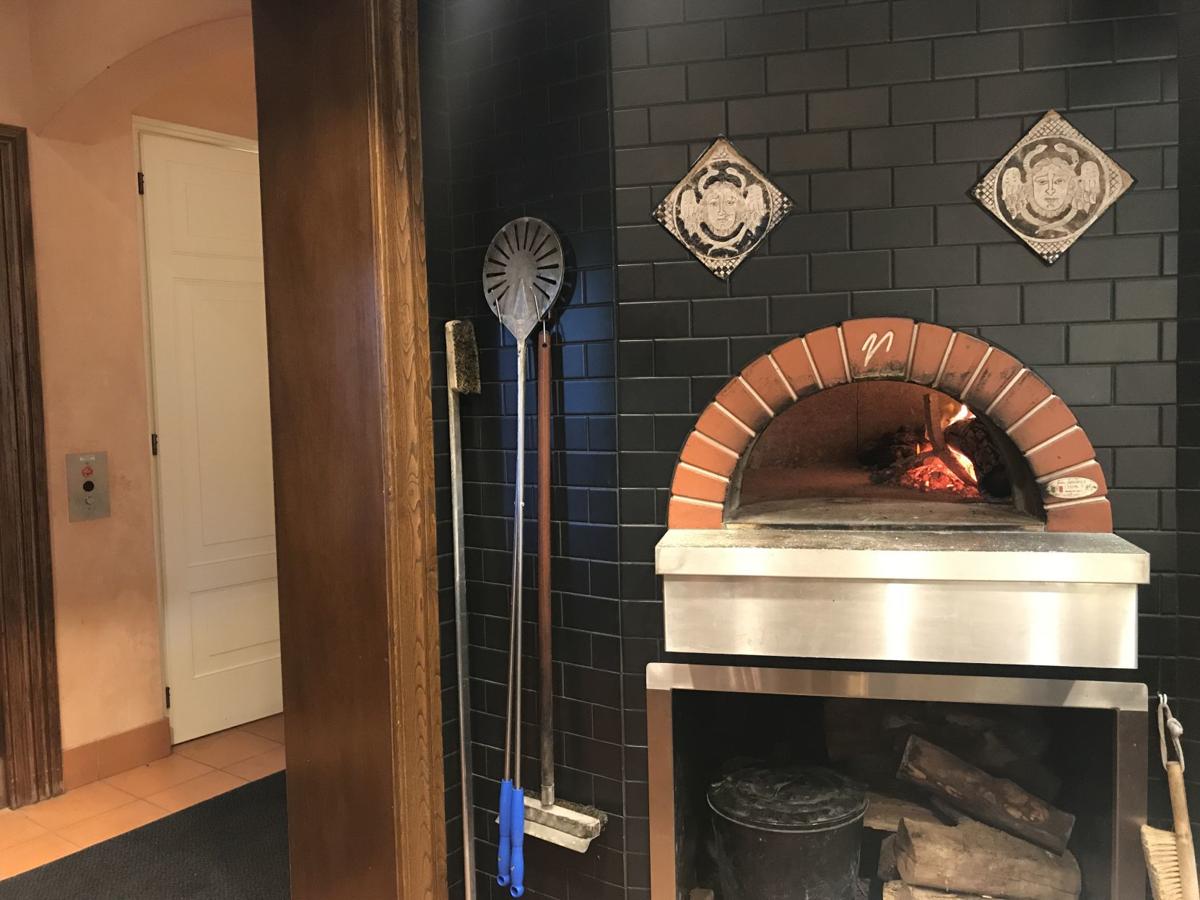 There’s a science behind pairing food and wine – just ask any sommelier. For some of Napa’s wineries, deciding how best to incorporate food in their tasting rooms is a matter of similar nuance.

Dave Del Dotto opened his third winery, Piazza Del Dotto, in 2017, with the intention to offer unique food and wine pairings as a way of distinguishing the property. Now, though, the winery is moving toward simplicity when it comes to food.

“We thought we would be the cutting edge and try and upgrade the food a little bit, because I have a French Laundry-trained chef,” Del Dotto said. “We’ve found over the last couple of years that we’re narrowing that down. We’d like to have a little bit of food with the wine pairings, but we don’t want to do too much.”

Upon opening, Piazza Del Dotto’s tasting menu included pairings like a Maine lobster roll on brioche with Chardonnay and an American wagyu black truffle slider with Cabernet Sauvignon; one of their previously offered tasting experiences featured crispy frog legs and house-cured bacon with black truffle in an egg-based pasta dough.

Though guests can still opt-in for a tasting experience featuring gourmet bites, the winery is moving toward serving charcuterie boards, for which they cure their own meats, and small pizzas, house-made in the winery’s brick oven, Del Dotto said.

“I’m going really simple (with the pairings),” Del Dotto said. He’s not in the restaurant business, he added, and the winery doesn’t have the “resources or inclination” to serve a full lunch.

Nor would the winery be necessarily permitted to do so. Earlier this year, the county served B Cellars a code violation notice over its food service, saying that it appeared to function as a café/restaurant and that its marketing efforts overly emphasized food.

Per Napa’s Winery Definition Ordinance, wineries must function principally as agricultural processing facilities. For wineries not grandfathered in to the winery definition – any winery that “commenced operations prior to July 31, 1974” – tours, tastings and marketing of wine produced are all considered ‘accessory use’ of the winery. While the county allows for food service as a facet of winery marketing, the ordinance says food must be served at cost and “in association with education and development” of the wine.

Some wineries, like Madonna Estate, serve only wine at their tastings. Wineries may include food with their wine pairings, as long as their service and marketing complies with the Winery Definition Ordinance. It’s a unique set of parameters under which Napa’s wineries must operate.

B Cellars’ code violation has since been resolved, according to the county. And B Cellars continues to consider food pairings an integral part of its wine tastings, according to General Manager Curtis Strohl.

“This is how we conceive of wine tastings,” he said. “When we’re blending the wine, one of the questions we ask ourselves is, ‘what (food) would you serve with this?’ That’s a part of the wine story, as much as the terroir is.”

B Cellars sees the resources it puts into its food and wine pairings as a marketing expense, according to co-founder Duffy Keys.

Like Del Dotto once had, Keys said food pairings allows the winery to differentiate itself from others. B Cellars’ menu currently offers pairings like truffled potato chips and French onion dip with Chardonnay and a fig flatbread with Pinot Noir. All of the tastings come with bite-sized, gourmet-type food pairings, unless otherwise requested by guests.

Linda St. Claire, code compliance supervisor for the county, said the county has investigated previous complaints of “restaurant activity” at wineries, and after speaking with the owners, concluded they were “doing OK” relating to their compliance. She did not specify which wineries she was referring to.

Beverly Sodhani and her husband, Arvind, own Sodhani Vineyards in St. Helena and recently applied for a modification of their use permit with the county. Their use permit currently allows only for retail sale of wine; if granted, the modification would allow visitation to the property for the first time.

They’ve also applied for tastings and food and wine pairings in conjunction with the visitation. As a boutique winery for whom case production ranges from 500 to 700 a year, they plan to keep their tastings as simple as possible, according to Sodhani.

“We’d be doing mainly cheese and some bread, something that adds to the experience but (involves) no chef,” Sodhani said. “Being so small, for us, it’s all about the wine. We want to showcase the wine, not compete with it.”

The respective choices of wineries speak to divergent trends in Napa, according to St. Claire. But it also highlights the individuality of the valley’s wineries.

“Wineries are (an extension of) the individual who owns the winery, and they all have their own personality, they all want to do their own thing,” she said. “There’s a huge variety when it comes to what they can do.”

The world of food and wine in the Napa Valley has never been as challenging as it is today. With tectonic shifts in demographics, changing con…

Brothers Lance and Neil Ellman have won county permission to build a winery along Silverado Trail northeast of the city of Napa.

B Cellars' truffled potato chips and french onion dip, to be paired with Chardonnay as part of one of its tasting menus.

B Cellars' sweet corn madeleine, paired with its 2018 Blend 23, also pictured, as part of one of its tasting menus.