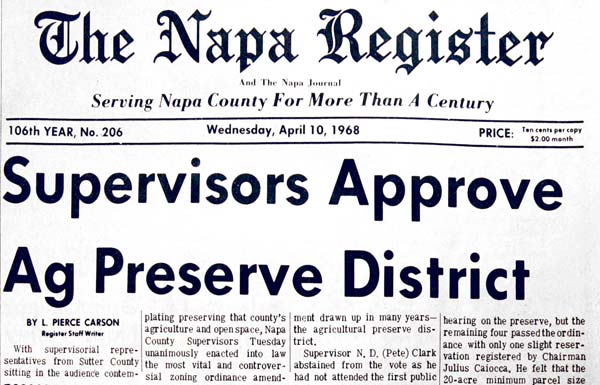 Front page of the Napa Register from 1968, announcing the Ag Preserve. J.L. Sousa/Register 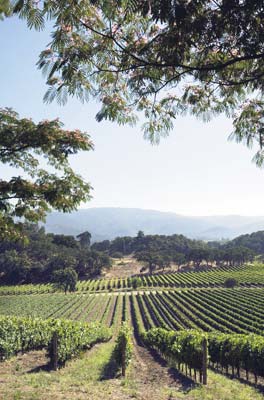 Tree branches frame a beautiful view of the vineyards from the back deck of the Joseph Phelps Vineyard, which has about 400 acres of vineyards in the Napa Valley. Sarah Orr/Register
By L. PIERCE CARSON
Register Staff Writer

County fathers knew in 1967 they had to do something.

They’d seen farmland in other parts of California paved over for a burgeoning population, including once productive fertile orchards in Santa Clara Valley.

When earnest county staff came forward with plans for a greenbelt, the county supervisors were all ears.

The effort to preserve fertile valley ag land would take advantage of new state programs and legislation, and it would entail a massive public relations effort to sell local landowners on the idea, all hands admitted.

They would enlist the help of Upper Napa Valley Associates, an organization of residents concerned about the politics of land use. One member was vintner Jack Davies, who, in addition to launching a new wine brand, Schramsberg, was worried about slowly disappearing farmland throughout the Golden State.

The first of its kind in the nation, Napa County’s agricultural preserve might not have happened if it weren’t for the watchdog efforts of then-Napa County Assessor George Abate.

Not one to toot his own horn, Abate nevertheless alerted other county and state officials here not only to the far-flung threats to agriculture but to new state programs designed to help farmers and keep ag land in production.

To see how this came together requires examining issues that set it all in motion.

Abate, a straight-shooting assessor first elected to his post in the early 1960s, recently recalled how assessment scandals in several areas of California prompted new legislation regulating the practice of land valuation. That legislation sent shock waves through ag counties around the state.

Assembly Bill 80 dictated that county assessors must value land based on comparable nearby property sales. It was on these assessments that taxes were then collected.

Abate recognized the possibility that a few acres of idle farm land, sold at a high price for home sites, might have to be used as the standard for assessing all similar tracts in the neighborhood. One or two land sales in any given area, then, might trigger higher assessments in a particular region, effectively forcing a working farmer to sell his property, too, in order to pay a much higher tax bill.

But the impact of AB 80 didn’t escape notice of Sacramento legislators, either. Led by Assemblyman John Williamson, the California Legislature in the mid-’60s enacted a new law designed to preserve agricultural and open space land in danger of premature conversion to urban uses.

The California Land Conservation Act of 1965 — commonly referred to as the Williamson Act — enabled local governments to enter into contracts with private landowners for the purpose of restricting specific parcels of land to agricultural or related open space use. In return, landowners received property tax assessments which were much lower than normal because they were based upon farming and open space uses as opposed to full market value.

Armed with the knowledge that the state would do its part, county officials knew there was work to do here in the valley.

Abate presented his concerns to County Administrator Albert Haberger, a no-nonsense public official who brought both new blood and direction to county government in the mid-’60s. Haberger sensed the urgency to stem the tide of urban sprawl, to substantially slow the march of population to Napa County where, state officials predicted, some 200,000 people would live by the year 2000.

Haberger built a team that could explain the need to pass legislation protecting county ag land (which included some 12,000 acres  of vines, just one fourth of what is planted here today). He enlisted the help of Mervin Lernhart, then deputy county counsel, in drafting the legislation that would create the first ag preserve in America.

Planning Director Vern Cotter and his assistant, Eric Borgwardt, would be called upon to lead the public hearings before the Napa County Planning Commission. Jack Fisk, the state’s liaison to county agriculture, and the county’s agricultural commissioner, Aldo Delfini, joined the team.

Plans were drawn up to protect some 26,000 acres of farmland, mostly on the valley floor. (Today, Agricultural Preserve zoning covers close to 40,000 acres.)

An educational campaign was launched in the fall of 1967, one that focused on the promise of lower taxes for land kept in agriculture. County staff presented a realistic portrait of farmlands saved from the bulldozer, of the tremendous potential for Napa Valley to become a shining star in the world of winegrowing. All this long before the first mention of an idyllic Napa Valley lifestyle.

Haberger marshaled the county’s team to present talks on the proposed ag preserve and its impact at gatherings around the county.

Chaired by Felix Vanderschoot, the Napa County Planning Commission launched a series of public hearings on the legislation in December of 1967, just prior to the Christmas holidays.

While proponents insisted the measure would save Napa Valley farms — and, in particular, viticulture — the opposition claimed AP zoning would destroy land values and would prevent them from dividing up lands as inheritances for the next generation.

What was not debated was the future of winegrowing in Napa Valley.

A few respected vintners maintained Napa Valley had the potential to become one of the best wine-producing regions in the world. Ag preserve opponents, in large measure, were unsure that Napa County’s future would be in grapes. Even some who were farming the land at the time wanted to retain the option of being able to sell off a chunk of property for home sites if the going got rough.

Some listened and some didn’t when Abate predicted the Napa County land would, in future years, be much more valuable as farmland than as potential subdivision sites.

Once lost to concrete and residential development, ag land cannot be reclaimed, one advocate declared as planners opened public hearings.

At first reluctant to be drawn into rancorous debates, respected St. Helena winemaker Louis M. Martini asked rhetorically: “Do the citizens of the Napa Valley really believe the future of our land is best served by destroying landmarks and vineyards and replacing them with subdivisions, bleak shopping centers and highway strip developments?”

Martini told county officials he believed the Napa Valley wine industry was “headed to a degree of quality not achieved in the past or elsewhere in the world. You let this go and you will have a real catastrophe.”

Davies said planners and county fathers were on the right track and suggested they and vintners work together. “This county does not deserve to be treated like a used car lot,” he declared at one public hearing.

But opponents were not swayed. Branding the proposal “un-American and socialistic,” one-time Inglenook Winery owner John Daniel said the proposed AP zone was “unfair to the landowners and the objectives of such zoning are vague and imprecise.” Daniel believed the broad powers of both planners and supervisors “should be tempered. There was no economic study made by the planning staff to show what the effects of such a preserve would be.”

Grower B.C. Solari, who was president of United Vintners, maintained the effort was a threat to the investment climate in Napa County.

Cameron Baker, attorney for the Committee for Fair Agricultural Preserves, a vocal opposition group, felt the legislation had been hastily drawn and needed instead to be reviewed and studied by land use experts.

Agreeing with the opposition that the proposed 40-acre minimum lot size in the new Agricultural Preserve zone was too large, the county’s planning commission cut the minimum in half when it approved the legislation in mid-January 1968, sending it on to the board of supervisors.

County supervisors Henry Wigger, Jack L. Ferguson, Julius Caiocca and Dewey Andersen opened the first of the board’s public hearings in early March of that year. Because Supervisor N. D. (Pete) Clark was ill and did not attend the first hearing, he was not permitted to cast a vote on the matter.

On April 9, 1968, the board of supervisors, on a 4-0 vote, approved the first agricultural preserve in the United States. An appeal of their action to the Napa County Superior Court was unsuccessful, as a visiting judge ruled in the county’s favor.

Carnival brings rides and games back to Napa Valley Expo

Carnival brings rides and games back to Napa Valley Expo

Drift smoke in Napa Valley is from fires outside the area

Drift smoke in the area poses no threat to Napa County residents.

Front page of the Napa Register from 1968, announcing the Ag Preserve. J.L. Sousa/Register

Tree branches frame a beautiful view of the vineyards from the back deck of the Joseph Phelps Vineyard, which has about 400 acres of vineyards in the Napa Valley. Sarah Orr/Register
© Copyright 2021 Napa Valley Publishing, 1615 Soscol Ave. Napa, CA | Terms of Use | Privacy Policy | Do Not Sell My Info
Powered by BLOX Content Management System from TownNews.com.
You don't have any notifications.