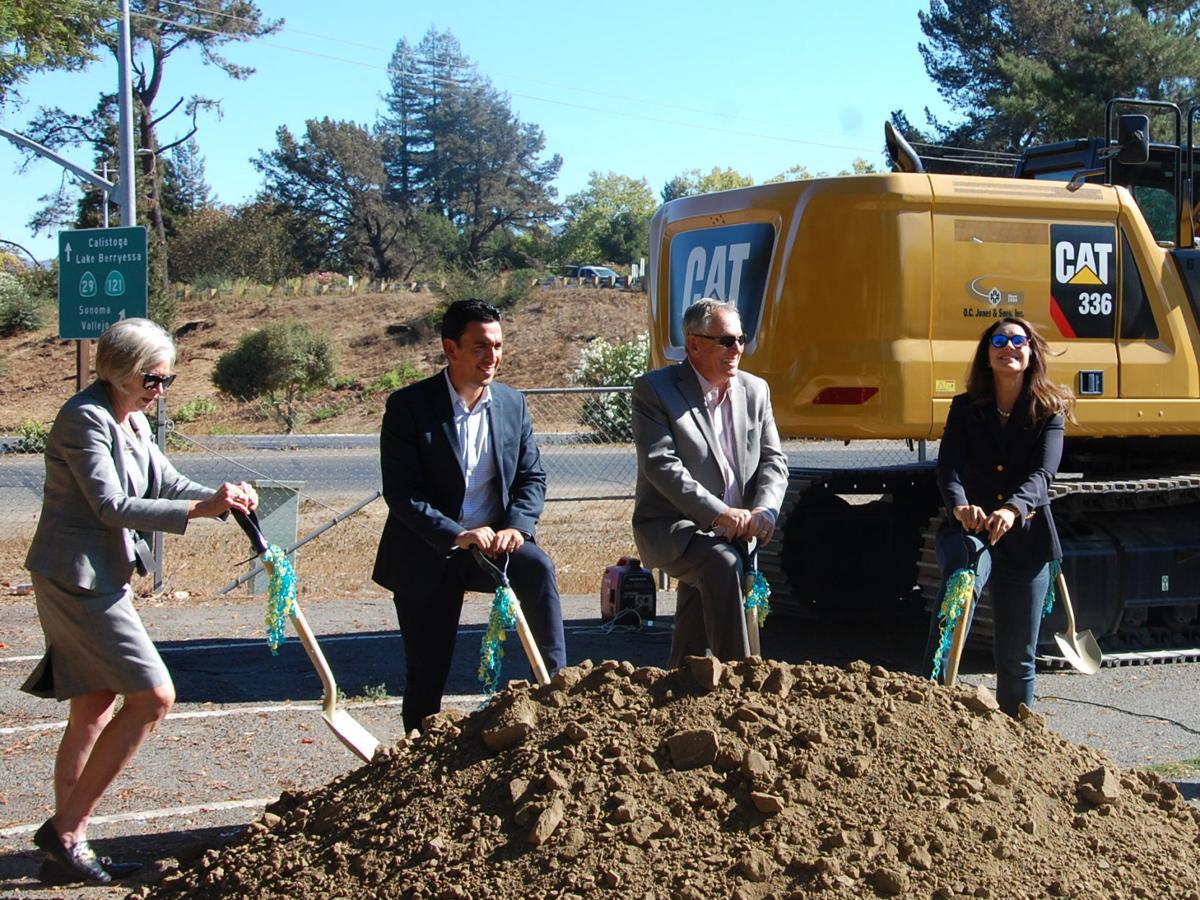 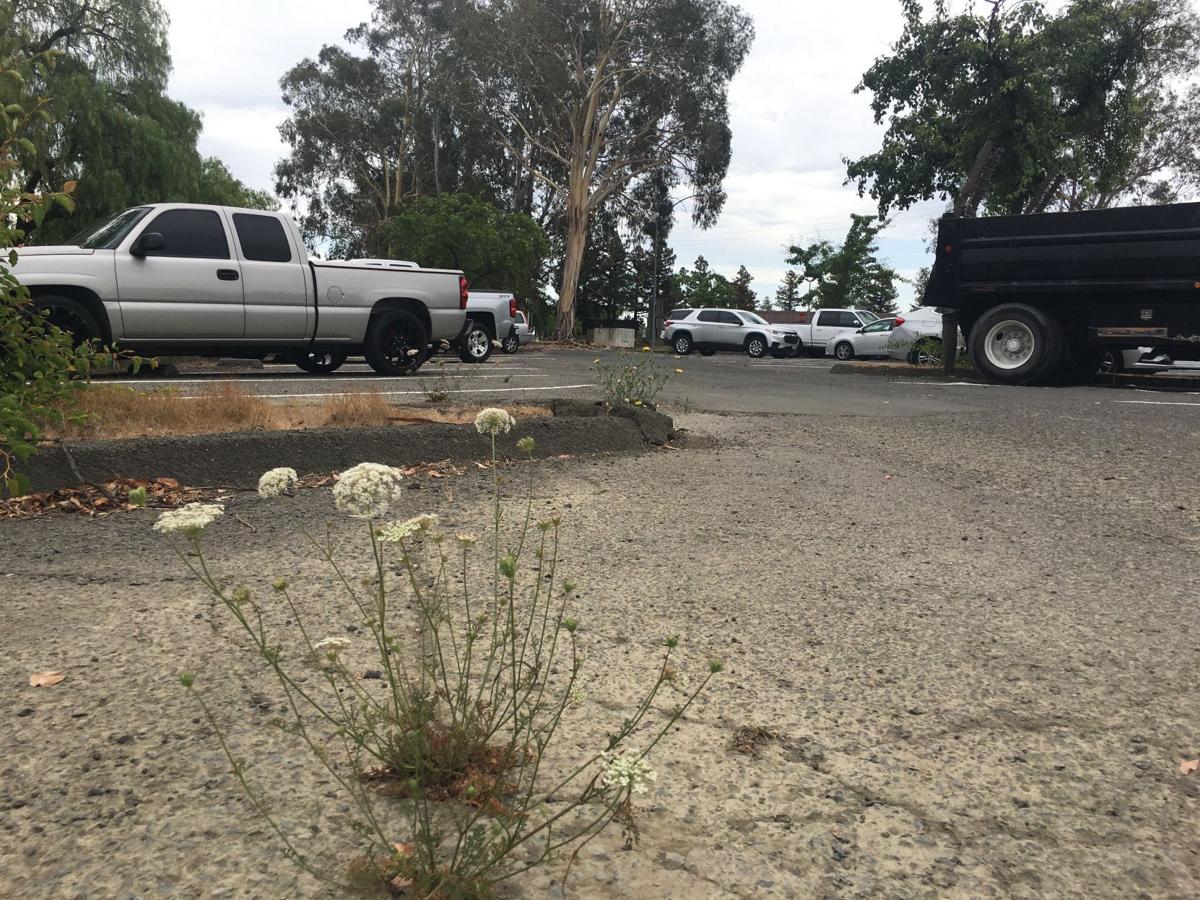 The pavement in the Imola park-and-ride lot has seen better days. A renovation of the lot will be underway soon.

This depiction shows how the aging Imola park-and-ride lot is supposed to look after a planned renovation.

A $3.1 million renovation of the Imola park-and-ride lot could be the start of some big changes for Imola Avenue as a whole.

The lot along Golden Gate Drive near Imola Avenue in the city of Napa was built during the early 1980s and doesn’t look like it’s had a facelift since. Weeds grow out of cracked asphalt pavement.

Nor is the lot exceedingly popular. A couple of dozen vehicles might be seen in its 76 spaces on a typical day. There’s a sense of a heyday long past.

Work should be finished in about six months, depending on the weather, transportation officials said. Then commuters will have a better place to park to catch carpools or buses.

Public transportation is about convenience and efficiency, Napa Mayor Scott Sedgley said during the groundbreaking ceremony.

“What could be more convenient than this location along the Imola corridor?” he said.

An express bus service stop moved in 2013 from the Imola park-and-ride lot to the Soscol Gateway Transit Center. When the park-and-ride lot improvements are done, the stop will move back to Imola. The buses go to the El Cerrito Del Norte BART station.

Berkeley-based O.C. Jones & Sons will do the $2.4 million construction phase of the park-and-ride lot renovation.

County Supervisor Alfredo Pedroza on Monday was pleased to see a towering, yellow hydraulic excavator ready to start another project. But his main focus wasn't the excitement of pending construction.

“It’s about people,” said Pedroza, chairperson of the NVTA Board of Directors. “It’s about the lives we are trying to benefit.”

The NVTA in 2020 spearheaded a vision for Imola Avenue that goes far beyond the park-and-ride lot. The goal is to turn this busy, car-centric street into something that is easier to walk and bike, as well as improve the aesthetics.

It's unclear when work might get underway. NVTA Executive Director Kate Miller said Caltrans is making plans to improve the section of Imola Avenue that is also Highway 121.

This whole area is primed for redevelopment. Perhaps these two projects will provide a jumpstart, she said.

Sedgley also talked about the Imola Avenue corridor. Affordable housing could be built next to the park-and-ride lot. Napa Valley College plans to build housing. To the south, Napa Pipe is to bring homes and Costco.

“This is where a lot of growth is going to happen in our community, south of Imola," he said.

Sedgley recalled how Imola Avenue looked back in the 1960s and 1970s. The Highway 121 segment was a main regional transportation route, before the Highway 29 Southern Crossing/Butler Bridge was built.

“That was the highway to get all Sonoma County traffic over to the Central Valley, right down Imola,” he said. “There were no less than eight fueling stations, eight gas stations on Imola. Every corner had a fueling station.”

With Imola Avenue poised for yet another transformation, a renovated park-and-ride lot is to be an anchor on the west end.

Voters may wait until 2024 to tweak Measure T

Consultants say the 2024 presidential election might be the best time to try to revamp the Measure T half-cent transportation tax.

Letters: Not sure if that is the best use of our citizens' hard-paid taxes.

The Napa Valley Transportation Authority will provide free rides on Vine Transit and VineGo for all riders on Wednesday, Oct. 6 as part of California Clean Air Day.

Napa County supervisors will stick with the status quo and not modify the formula that sets their salaries.

The pavement in the Imola park-and-ride lot has seen better days. A renovation of the lot will be underway soon.

This depiction shows how the aging Imola park-and-ride lot is supposed to look after a planned renovation.