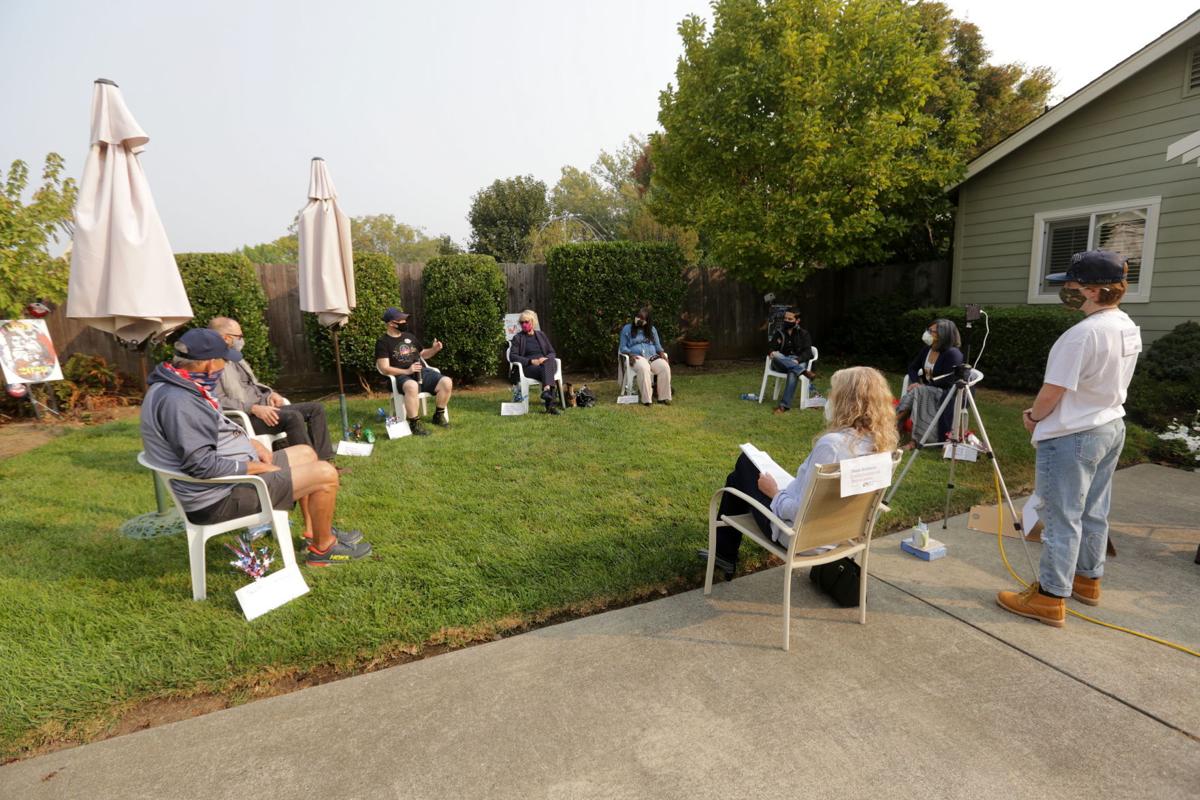 A panel of Napa Valley resients from various backgrounds met Sunday morning for the Neighborhood Conversation for Civil Rights Solutions, an informal roundtable devoted to sharing experiences about local racial issues and working toward solutions. 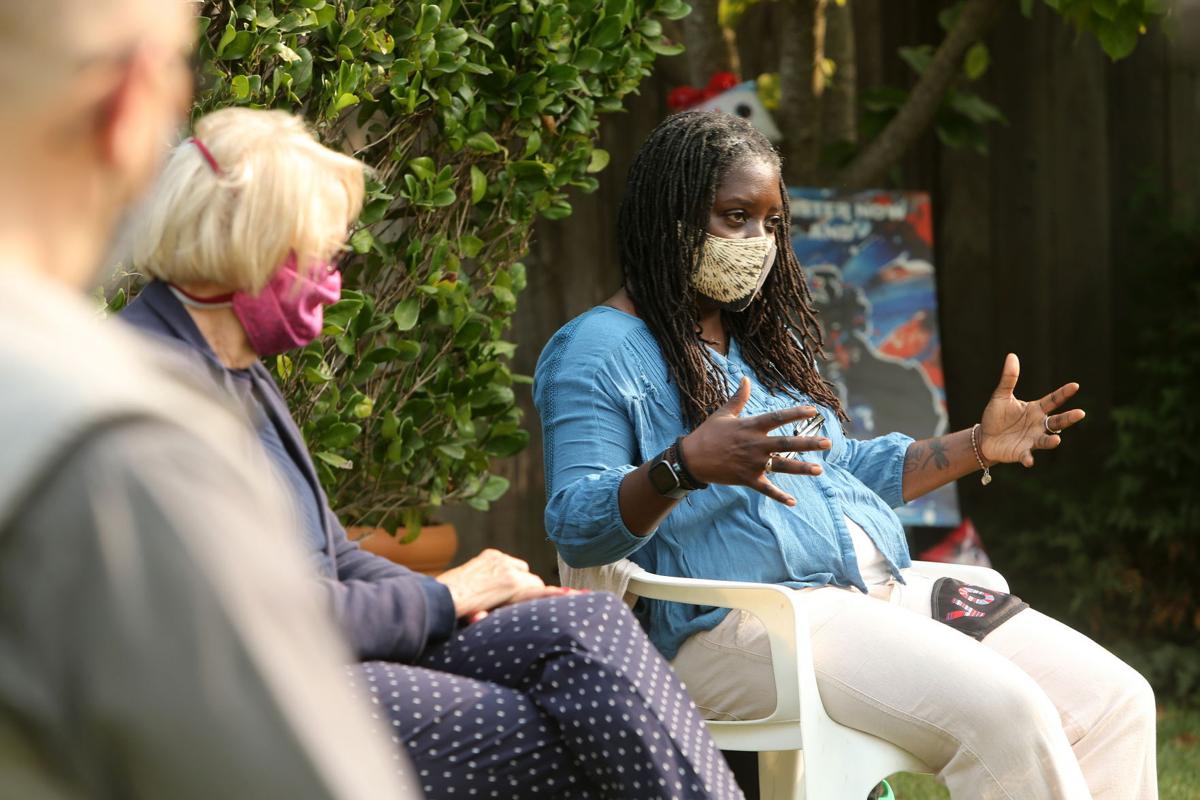 Kim Hester-Williams, an American Canyon resident and a professor of ethnic studies and English at Sonoma State University, was one of three people of color to serve as panelists at the Neighborhood Conversation for Civil Rights Solutions in Napa on Sunday morning.

How might people who share a community and little else understand one another's views on racial justice and economic inequity? For one group of Napa Valley residents, a simple discussion on Sunday morning – posted as a live video and shared by social media – was, they hoped, the beginning of an answer.

From an immigrant mother to a former county library director to an ethnic studies professor to the mayor of Napa, more than a half-dozen people got together in the courtyard of a west Napa townhouse for a free-form, round-table discussion designed to pursue the most uncomfortable and latent facts of local life.

Titled the Neighborhood Conversation for Civil Rights Solutions, the informal panel – set on socially distanced lawn chairs in a courtyard between two Glen Court townhouses – was modest in size and tone. But those who took part hoped it could inspire others in Napa County to confront the problems of discrimination and inequality in their daily lives, and try to work out solutions together, as free of partisan bitterness as possible.

“Equality for everyone is why I'm here, and why I've asked you all to be here,” the event's organizer Dina Greenberg told the eight panelists, who included the departing Mayor Jill Techel, Councilmember Scott Sedgley and Ricky Hurtado, president of the Napa County Hispanic Network.

Low key as the roundtable was, the meeting – which organizers streamed live to Facebook – put a cap on a summer in which issues of racial justice have come to the forefront of Napa discussions as seldom before.

The wave of anti-racism protests sparked by the May 25 death of George Floyd, a Black man, during an arrest by Minneapolis police came to the city in the form of weekend demonstrations downtown. A new district-based voting system for Napa City Council elections, starting with this November's races, was championed by petitioners seeking greater representation of Latino residents. And council members on Tuesday night will consider a petition to declare racism as a public-health emergency in Napa.

Though the speakers were chosen in recent weeks, the idea of a wide-ranging discussion about equality began taking shape not long after the coronavirus pandemic halted much of daily life and gave people unexpected time to ponder larger problems, according to Greenberg, a Napan and member of the Rainbow Action Network.

“As COVID hit us and the gulf between ethnicities became obvious, I decided to do something to make conversations between neighbors who don't think the same, easier,” she said before the forum. “This is my take on a grassroots, small-town approach to dealing with uncomfortable issues, life-and-death issues.”

Opening the discussion, moderator Danis Kreimeier, a former director of the Napa County Library, asked the panelists – which included three people of color – to listen as well as proclaim, and to keep their focus on the goal of safety and opportunity for all.

What followed was a series of tales both large and small in their scope, from musings on the amplification of political and racial strife on social media and shortages in funding to the everyday examples of minorities feeling suspicion from others.

Despite generally warm words for her life in American Canyon, “for me, anecdotally, I can tell you we don't feel entirely safe in Napa,” said Kim Hester-Williams, a professor of English and ethnic studies at Sonoma State University since 1997.

“My 15-year-old daughter is dating a white boy, and they want to hang out in Napa and we don't feel comfortable – his parents or us – with them walking downtown. It's a matter of 'We trust you all, but we don't trust other people,'” added Hester-Williams, the only Black panelist to appear. (Two other people of color scheduled to appear Sunday – Joshymar Graham and Gabriela Fernandez, members of the People's Collective for Change that organized anti-racism rallies in downtown Napa – withdrew due to air-quality problems in Napa amid the California wildfires.)

In the absence of active discrimination by citizens or law enforcement, the wide gulf in economic opportunity among ethnic groups still exerts its effects, added panelist Alejandra Bedolla, social worker for NEWS, formerly known as Napa Emergency Women's Services. “We don't talk to each other because we have neighbors who are impoverished an neighbors who are wealthy, and that creates a divide,” she said during the 90-minute discussion.

Modern communications have allowed such differences to persist and even fester, according to Casey Thorngren, the only self-identified conservative in the roundtable, alluding to his experiences with anti-gay attitudes before coming out last year at age 33.

“Sometimes I feel we get to wrapped up with identity, with teams,” he said. “We're tribal by nature; we get into our bubbles, our echo chambers. But we all have individual thoughts and we need to interact.”

A year filled with protests over the killings of minorities by law enforcement may finally be shifting the attitudes of some in local government, said panelist Scott Owens, a Napa County library commissioner.

Perhaps the most visible sign of that change in focus, he suggested, is a Napa City Council resolution that would classify systemic racism and discrimination as a “public health crisis,” citing the disparities in income, health care, education and housing security for Latinx, Black and other people of color. If passed, the resolution would commit Napa to reviewing city housing programs, and building partnerships with local organizations to address the effects of racism, according to a staff report published ahead of the council's meeting Tuesday.

Hester-Williams, the American Canyon woman and Sonoma State professor, held out hope for greater awareness of minority rights in those just entering their adulthood. “I have a 23-year-old and a 15-year-old, and they way they think about the world, about racial justice, social justice, LGBTQ rights, is so far above anything I grew up with,” she said.

But for such sentiments to bear their full fruit, she added, citizens must make the effort to understand communities beyond the ones they live in from day to day.

“It's difficult to make that commitment to go outside our bubble, but we have to,” said Hester-Williams. “Things are at a critical stage; things can go either way.”

The panel discussion can be viewed on Facebook on the page of BottleArt, an art group formed by Napa high school students, at facebook.com/bottleart.org.

Watch Now: "Not from Around Here"

Have you seen Thomas Coakley running around Napa with weighted vest and hoodie? What's the story?

A new city proclamation declares the legacy of racism and discrimination to be a threat not only to civil rights, but to the public health of minorities.

Calistoga is honoring National Latino Heritage Month by displaying the Flag of Mexico on the City’s ceremonial flag pole through Oct. 15.

A panel of Napa Valley resients from various backgrounds met Sunday morning for the Neighborhood Conversation for Civil Rights Solutions, an informal roundtable devoted to sharing experiences about local racial issues and working toward solutions.

Kim Hester-Williams, an American Canyon resident and a professor of ethnic studies and English at Sonoma State University, was one of three people of color to serve as panelists at the Neighborhood Conversation for Civil Rights Solutions in Napa on Sunday morning.