Become a Member
Read Today's E-edition
Share This
Jackson Family Wines lays out ambitious climate initiative, hopes to bring others along
Share this
1 of 2 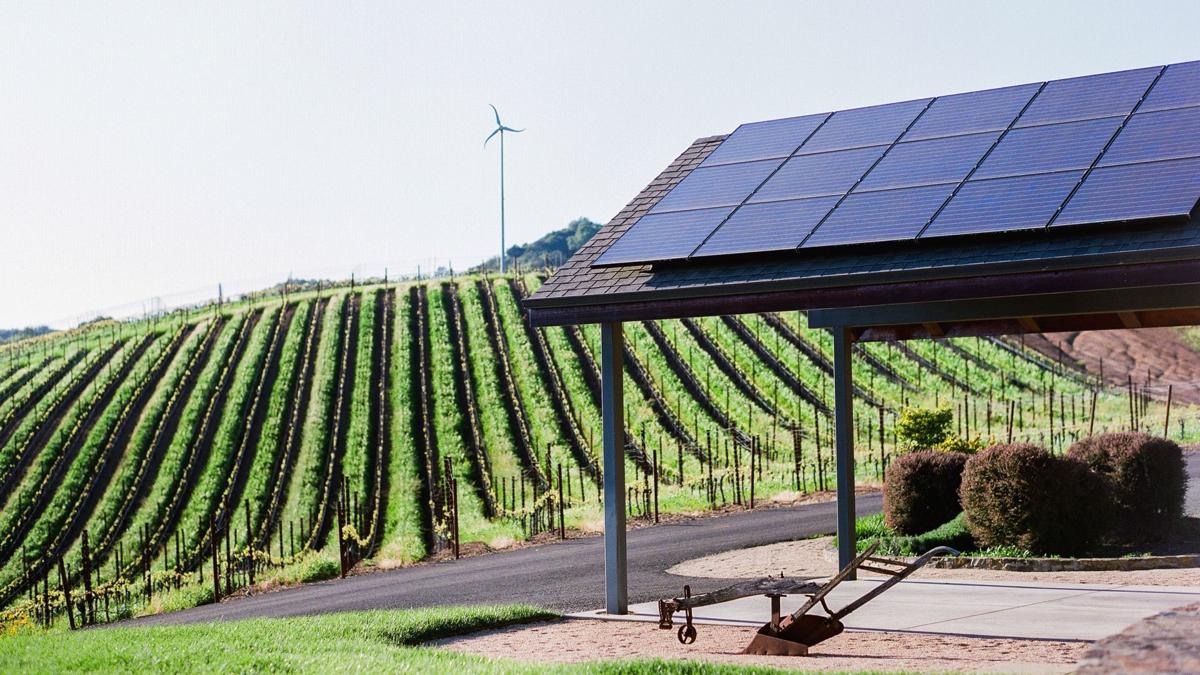 Jackson Family Wines isn't new to solar, but will continue to invest in arrays for their properties to cut down on energy use and give back to the grid, when possible. 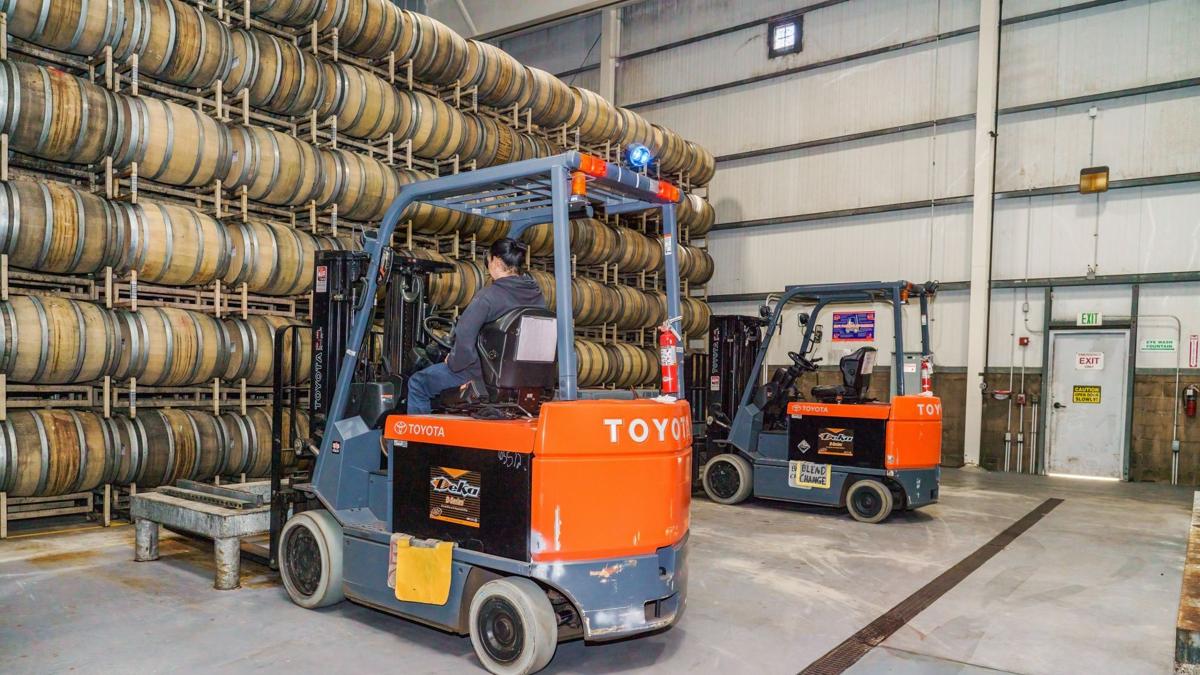 The Jackson Family Wines empire says it aims to cut its carbon footprint across the entire supply chain in half by the end of the decade, but that's just the start of its climate action.

More ambitiously, it is planning to be "climate positive," by 2050, meaning JFW’s operations would not only have a neutral effect in terms of carbon and emissions, but through renewable energy and carbon sequestration efforts, could actually have a positive effect.

“Having a successful business allowed us to do things the right way, but it necessitated that we act as stewards to the land,” said Katie Jackson, who grew up in the business and has now risen to Vice President of Corporate Social Responsibility. “Sustainability is something I felt passionate about from a young age, and I feel very grateful to be able to focus on this in our family business.”

Jackson Family wines is a major producer in the region, with six Napa properties and another 15 in Sonoma. Company officials said they wanted to set out their goals publicly to boost the broader discussion of climate change in the industry.

“As we move forward with this initiative, we need to bring in other wine companies,” JFW’s CEO Rick Tigner said, “Both bigger than us and smaller than us.”

The wineries and vineyards of Napa Valley have been feeling the impacts of climate change long before the most recent Intergovernmental Panel on Climate Change report was released this month, warning of “widespread, rapid and intensifying,” climate change impacts. The 2017 fires shocked many locals, and last year’s Glass Fire burned into the heart of wine country.

Jackson Family Wines' “Roadmap to 2030” plan is part of its “Rooted for Good” campaign.

This initiative is JFW’s largest to date, but the company first began its sustainability journey back in the early '90s when they adopted a drip irrigation system. Baseline usage levels were measured in 2008, giving JFW the data needed to come up with their since-surpassed water goals set in 2015.

“[Then] in 2017, obviously there were very intense fires that occurred and had a huge impact on the community,” said Jackson. Shortly after, she and her family decided they wanted to set 2030 climate goals.

Although it is a significant local player, JFW isn't the first to release ambitious climate plans. Napa Green, for example, has about 90 certified wineries as of spring 2021, which comes out to be about 33 percent of certified wineries in the country.

JFW is adjusting its communications approach in addition to the concrete measures to decrease emissions and water use. In working with expert communicator Elaine Chukan Brown and others in the wine industry, JFW will be putting on a free webinar series for winemakers to learn about minimizing the negative impacts on their own properties.

“At the beginning of this year, it became clear that any projects I took on needed to be for climate action and social responsibility,” said Chukan Brown at the kickoff for the Rooted for Good campaign this week. “[And] we are talking about dire need now.”

Jackson, VP of Sustainability Julien Gervreau, and a team of over 100 employees and external stakeholders put together a set of tangible goals to help reach this state of climate positivity, setting four main pillars of focus for the initiative. In late August, the team will kick off moderating five digital sessions digging into each pillar from the vintner perspective.

The first of these pillars pertains to climate action and greenhouse gas emissions, which directly ties into the goal of eliminating JFW’s carbon footprint. Gervreau said they plan to achieve this by accelerating the company’s investment in renewable energy, largely by constructing additional solar arrays on its properties and moving forward with a wind turbine near Carmel Road in Monterrey.

Similarly, they hope to reach zero emissions for transportation across production, shipping, and the like. The masterclass on this pillar is scheduled for Aug. 31 and will feature Gervreau and Chukan Brown as panelists alongside Gonzalo Munoz, High-Level Champion of Chile for Climate Action with the UN, Brian Kristofic of Ardagh Glass Packaging, and Kimberly Nicholas of Lund University in Sweden.

“Sustainability is a huge driver of business success, and what we’ve learned is we need to work together … We need to collaborate,” said Gervreau. He said that JFW is learning how to “leverage their space in the wine industry to enact positive change,” and are confident in this mix of corporate action and education strategy.

Gervreau said that JFW plans to avoid relying on carbon offsets to achieve their carbon positive goals, so the group will really need to be serious about investing in their properties and partners.

“You can't buy yourself out of this,” he said.

Masterclass sessions will be held on Sept. 14 (water management), Oct. 5 (regenerative agriculture) and Nov. 9 (social responsibility), with the final session on Nov. 30 scheduled as a sustainable wine tasting.

In addition to assessing its energy and water usage, JFW also plans to transition 100% of its estate vineyards to regenerative farming practices and is looking into ways to actually replenish natural (limited) aquifers.

“It’s really a focus on adding more compost to our vineyards, it is reducing or eliminating tillage, cover cropping and integrating livestock,” said Gervreau. “We need to decarbonize as soon as possible.”

The potential for an extended drought has Napa Valley grapegrowers worried.

Far Niente is making a big investment in Carneros in the face of declining Chardonnay production elsewhere in the county.

Napa Valley vintner Warren Winiarski has given half a million dollars to UC Davis for their project to update the Winkler Index, a 1940s study that became the guide used around the world to help grape growers determine the best grapes to plant in their regions.

The Climate Connection:The road to 350 – A climate ride

Napa Climate NOW!’s “The Road to 350,” was three days of 50-mile or 50-kilometer rides — a nod to the critical number of 350 parts per million, the level of carbon dioxide in the atmosphere above which life as we know it is severely threatened.

Worsening drought conditions and the subsequent need to reduce water usage may serve as another obstacle for Napa Valley's tourism economy.

Jackson Family Wines isn't new to solar, but will continue to invest in arrays for their properties to cut down on energy use and give back to the grid, when possible.