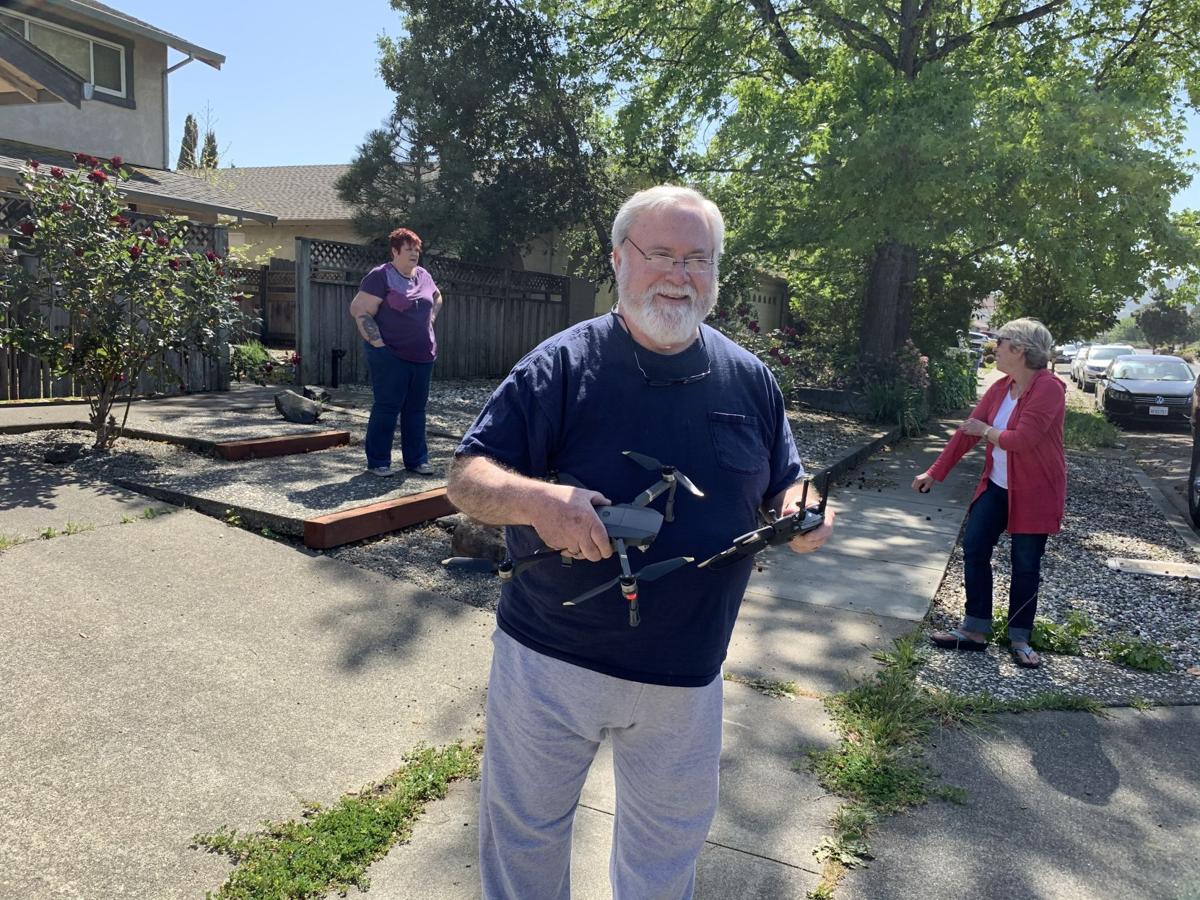 Bob Amoroso and his drone. Behind him, Napa Methodist church members Vicki Poli, left, and Jan Amoroso visit at a distance after Poli was filmed by Amoroso's drone. 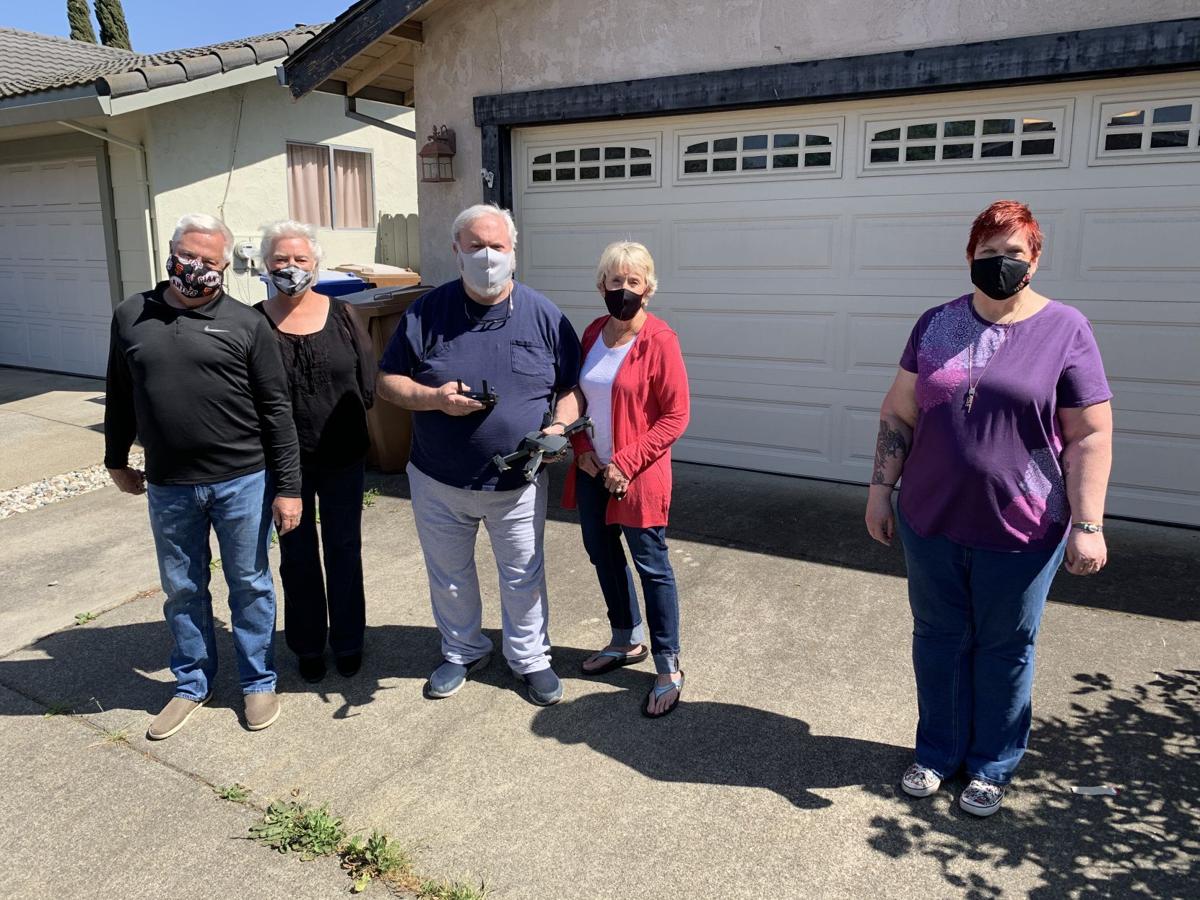 Some Napa churches are staying in touch during the pandemic with Zoom sessions and services on YouTube and other virtual visits.

Napa Methodist Church has taken staying in touch with members to a new level, literally.

A group of volunteers from the downtown church has been sending a drone to visit parishioners at their own homes, making videos of the short encounters, and then posting them online for the congregation to view on YouTube.

When the COVID-19 shutdown started last year, “people were so sad we couldn’t go to church and greet each other,” Loie said. “I mulled it over in my head … how can we see each other without really seeing each other?”

That’s when she thought of her brother-in-law Bob Amoroso, who happens to have a drone and a license to fly it.

Loie figured she and Bob could head to members’ homes, launch the drone and do a video of that person waving to the drone without leaving their front door or porch. The drone visits are then collected into short videos which are added to the end of each Sunday's virtual church service.

It was a hit, said Loie.

“Everyone’s just enjoyed seeing each other and it's fun for us, because we get to see everybody, too, at a safe distance,” said Jan. “It’s pretty cool.”

“It’s kind of a novelty,” said Bob. For some people, it’s the first time they’ve ever been recorded by a drone.

She likes being part of the Just Say Hi crew, said Loie, especially because “for us who do the filming, we actually get to see their faces.”

It’s been more than a year since the church held in-person services and those gatherings have yet to resume. The church members really miss each other, said Loie.

Launched in September, the Just Say Hi team has since visited about 65 to 70 homes and made about 13 video “episodes.” Each video is about three minutes long.

Each Just Say Hi video is filmed from a safe distance. First, Bob launches the drone, usually from the sidewalk. Then he flies the drone up above the resident, and slowly takes the drone down to reveal the person or family they’re visiting.

“I think it’s a great way to connect with all my church family who we miss terribly,” said Vicki Poli, who received a visit from the Just Say Hi crew on Wednesday.

“I like watching them,” she said of the videos made by the group. “Oh, there’s so-and-so; I haven’t seen them in a long time.”

“It’s kind of fun, and I’m looking forward” to seeing her own drone video visit on the church YouTube page, Vicki said.

Over the past months, the crew has traveled all over Napa Valley and even to homes in Fairfield and Rio Vista to film the short visits.

To view the videos from Just Say Hi, visit: JustSayHiMC.com

Sure, the church members could be seeing each other via apps like Zoom, “but this is more fun and a little more personal because we come to where they live,” said Jan. And anyone can participate, even those who aren’t computer savvy.

All you have to do is wave.

Photos: Napa church sends drone to "visit" members, and they love it

Bob and his drone.

Take a look at Napa Valley's most expensive ultra-luxury estates for sale. We're talking $26 million — and up.

A walk-in vaccination clinic is available this week for anyone 16 years and older.

Napa home sales and prices are on the rise, leading to a market where multiple offers are to be expected.

Napa's Memento Mori Tattoo is telling stories, one ink drop at a time. Check it out.

Vaccine clinics are available every day this week in Napa, with walk-ins welcome until 4 p.m., county officials said.

Napa Valley chefs contributed recipes to "The Essential Napa Valley Cookbook," the profits of which will support local restaurant workers as well as the Feed Napa Now program.

Bob Amoroso and his drone. Behind him, Napa Methodist church members Vicki Poli, left, and Jan Amoroso visit at a distance after Poli was filmed by Amoroso's drone.