An artist rendering of the eight single family cottages that Justin-Siena high school would like to build for employees at its north Napa campus.

An artist rendering of the eight single family cottages that Justin-Siena high school would like to build at the school in Napa. As many as 16 employees and their families could live on campus. 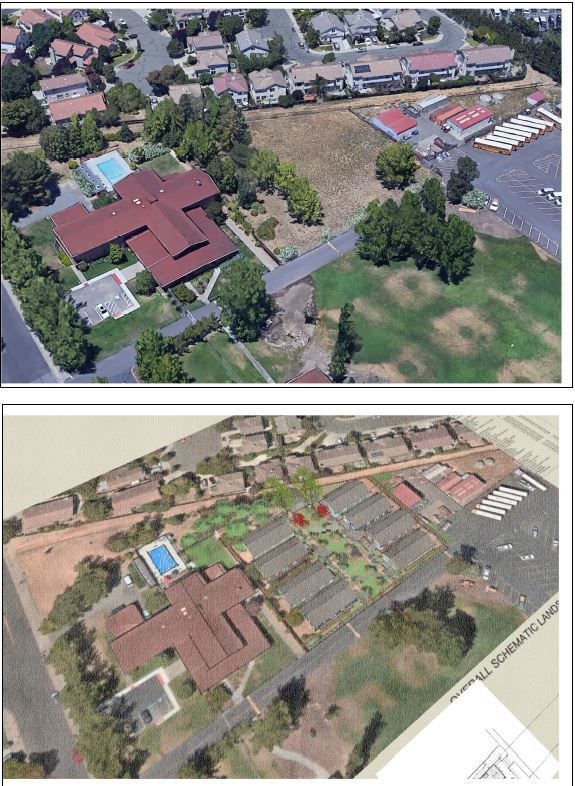 A map of the location where eight new cottages could be built for Justin-Siena employee housing.

If you build it, they will teach.

That’s what Justin-Siena is counting on.

In an effort to recruit and retain teachers and staff, the private Catholic high school would like to build eight single family cottages at its north Napa campus.

The housing – with rents set at affordable rates — would be available for the school’s faculty and staff, many of whom are currently commuting into Napa County from cities throughout the Bay Area.

“It’s the right project at the right time,” said Patrick Gleeson, president of the Justin-Siena Foundation. If all goes as planned, the school said it believes it can provide housing for as many as 16 faculty and staff, plus assorted family members. There are 70 such employees at the campus and 545 students.

“There’s a national teaching shortage to begin with. And couple that with the high cost of living in the Napa Valley, to retain and attract the (most) capable teachers we can we’re looking to be as creative as we can,” said David Holquin, school president.

According to Gleeson, the cost of housing – both renting and buying – has been a deterrent for some faculty and staff at the north Napa school on Maher Street.

“They have not been able to find an affordable apartment in Napa or buy a home in Napa,” said Gleeson.

“We think that providing workforce housing is not only a sustainable and community-oriented option for current faculty and staff — it’s also a recruiting opportunity.”

Gleeson said there have been times when “highly qualified” staff from outside Napa County or California have considered working at Justin-Siena, “but they just can’t swing the economics of it.”

Fortunately for Justin-Siena, the school has an unused parcel of land, located at the north end of the campus. The space is situated behind a former convent, which is currently being used as a dorm for boarding students.

According to a pre-application submitted by the school to the city planning department, the eight single-family, single story cottages would likely feature three bedrooms and 1,400 to 1,500 square feet.

Such a use would not be new to the campus, noted Gleeson. The school offers a dorm, currently home to 34 students. The Watermark at Napa Valley senior living community, offering 173 units, is currently under construction at the north end of the campus as well. Justin-Siena High Shool is located at 4026 Maher St.

Gleeson said sharing the housing concept with faculty and staff was met with “lots of excitement and enthusiasm,” and even some tears. “They said, ‘this could be something I could get really excited about.’”

The campus housing isn’t meant to be a “forever” home, said Gleeson. The idea is that thanks to the subsidized rent, tenants will be able to save money, build a nest egg and then eventually buy a home of their own in Napa.

Because this would mean new residents on Maher Street, informal conversations with neighbors have begun and will continue, said Gleeson. “We want to be very thoughtful about addressing concerns of the neighbors,” he said.

No garages or carports will be built, as there is plenty of parking on campus. As far as any traffic impacts, if staff is living on site, the housing should actually cut down on a small amount of traffic, he said.

According to the application, installation of the pre-fabricated units could begin in the summer and last 90 to 120 days.

Brendan Kelly, of Napa’s Kelly + Morgan Architects, is working with the school on the selection of the housing and design.

Each house costs about $150,000, said Kelly. There are additional costs to install the homes and connect utilities.

Even though they are prefabricated homes, “they won’t look like an army barracks,” Kelly said. Each home will appear different. Together, they will form a “pocket neighborhood” with central park and garden space. “The garden and the landscaping will connect it to the neighborhood — “to make it feel like ‘I’m home,’” he said.

Justin-Siena would not be the first business to propose employee housing. In July, the Wine Train submitted an application with the city of Napa to build two employee apartment buildings, totaling 55 units, along Soscol Avenue on a lot currently occupied primarily by vehicles from Greenbergs Quality Motors.

An artist rendering of the eight single family cottages that Justin-Siena high school would like to build for employees at its north Napa campus.

An artist rendering of the eight single family cottages that Justin-Siena high school would like to build at the school in Napa. As many as 16 employees and their families could live on campus.

A map of the location where eight new cottages could be built for Justin-Siena employee housing.