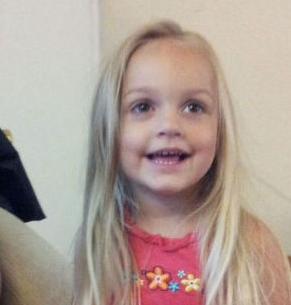 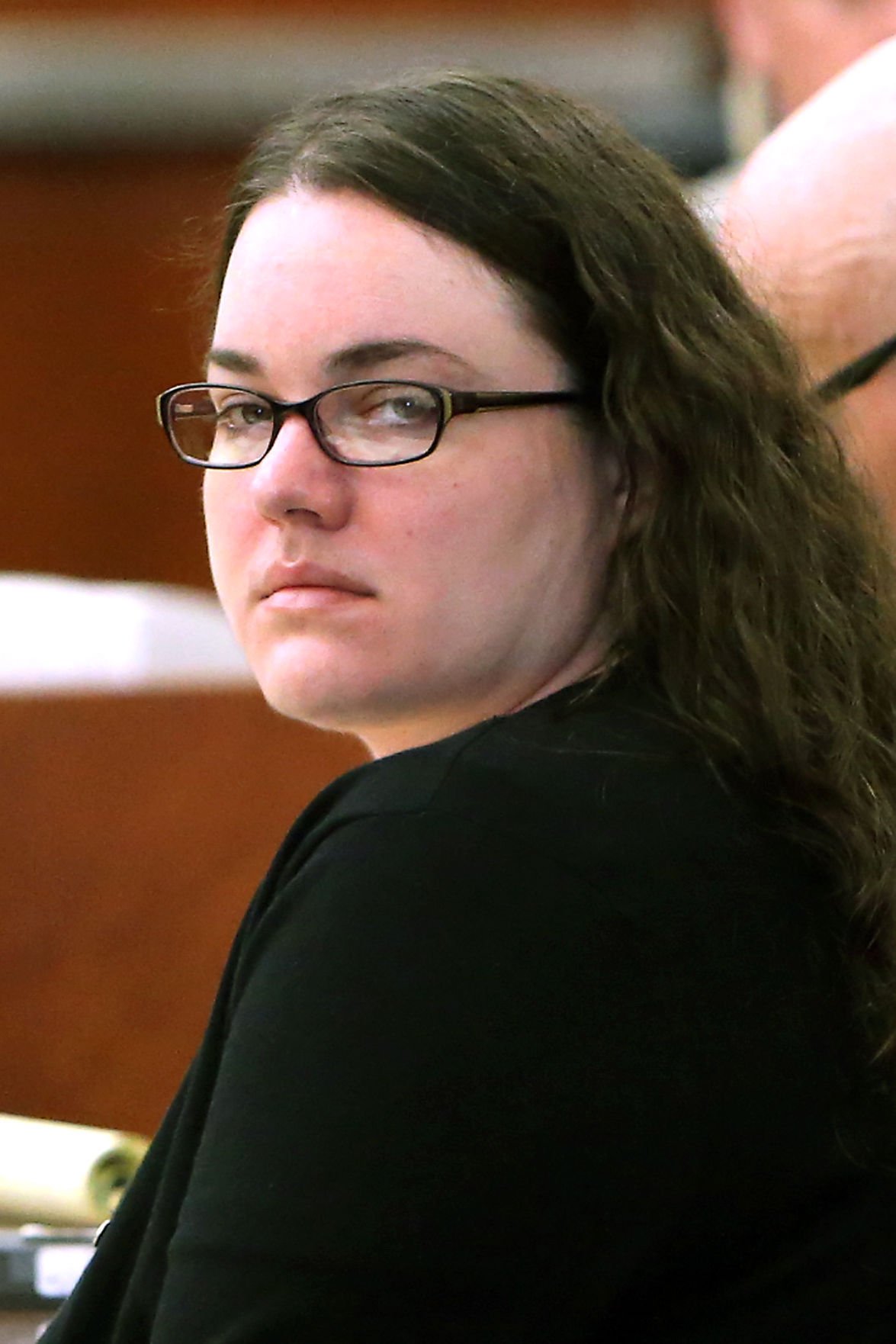 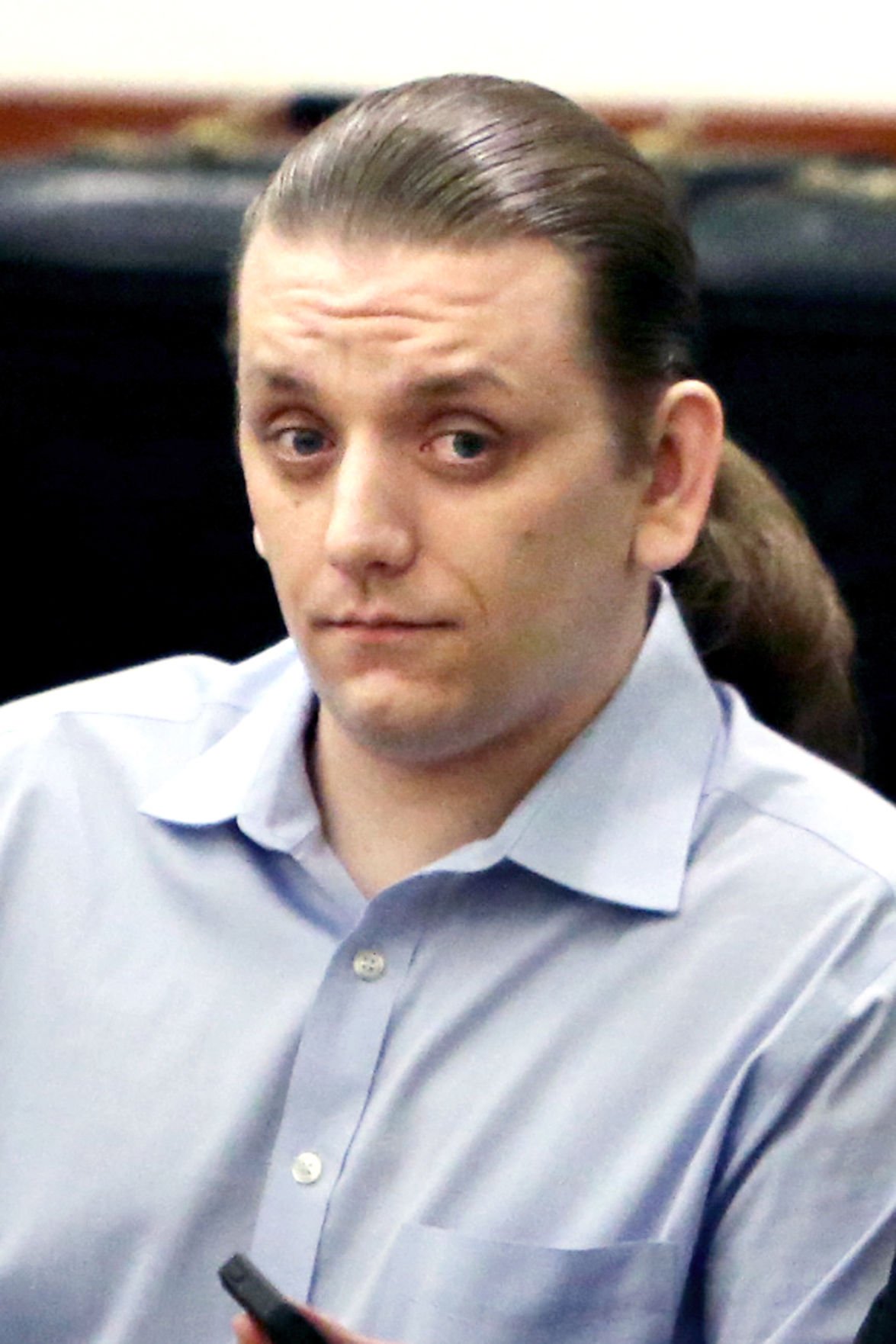 A white refrigerator covered in a white blanket greeted jurors in the Kayleigh Slusher murder trial when they walked into the Superior Court courtroom Thursday morning.

This was the eighth day of trial, with Sara Lynn Krueger, 26, the mother of 3-year-old Kayleigh, and her boyfriend, Ryan Scott Warner, 29, accused of the child’s murder in 2014.

Krueger, knowing that photos of Kayleigh’s autopsy would be shown in the morning, waived her right to be present for forensic pathologist Dr. Joseph Cohen’s testimony.

Cohen performed an autopsy on Kayleigh’s body on Feb. 3, 2014, two days after she was found by police dead in her mother’s apartment at 2060 Wilkins Ave. in Napa.

Kayleigh died from complications of mesenteric contusion and small intestinal hematoma caused by fatal child abuse and neglect, Cohen testified. She suffered multiple blunt impact injuries to the head, torso and extremities and her death was classified as a homicide.

During his external examination of Kayleigh’s body, Cohen said that he found approximately 41 visible injuries – a combination of both bruises and abrasions covering her forehead, face, torso, abdominal area, back, buttocks, legs and arms. The external exam, which typically takes between five and 10 minutes, took several hours, he said.

All of the external injuries appeared to be relatively recent, he said, originating anywhere from seconds to days before Kayleigh’s death.

Cohen took samples of Kayleigh’s bruises in hopes of having them made into slides so he could possibly get a better idea of their age. But, he said, the samples were lost during shipping. By the time he found out about the mishap, Kayleigh’s body had already been buried, he said.

“When I first saw Kayleigh, what struck me within seconds was that, at her abdomen, the skin was green and that was a red flag that I could be dealing with an abdominal catastrophe,” Cohen said. After a person dies, the first part of their body to turn green is usually the lower right abdomen, he said. “This was not the case with Kayleigh,” he said, “Her entire abdomen was green.”

The blood clot, Cohen said, was caused by a substantial blow, or possibly several blows, to Kayleigh’s abdomen. Dr. Cohen said that he found an injury to Kayleigh’s mesentery – fatty tissue that surrounds the small intestine – that was also caused by blunt force trauma.

The force (or forces), which came from the front of her body, was so strong that it may have compacted the small intestine and mesentery against her spine, he said.

Although Cohen could not date the injuries exactly, he said that he located enlarged lymph nodes in the mesentery that would have taken between one to three days to develop enlargement.

It’s most likely that the lethal injury was inflicted upon Kayleigh between two welfare checks performed by Napa Police – the one the morning of Jan. 27 and the one on the evening of Jan. 29, Cohen said. In comparing officer descriptions of Kayleigh for both days, Cohen said that it’s clear that Kayleigh was not herself on Jan. 29.

“Kayleigh was not interactive, she was sitting on her mother’s lap, she vomited – she was not the same Kayleigh as two days before,” Cohen said. Vomiting as well as pain, nausea, discomfort, loss of appetite and ultimately unconsciousness and death would have been symptoms of Kayleigh’s lethal injury, he testified.

“In my opinion, it would have been very clear that Kayleigh was in harm’s way after receiving the lethal injury,” he said. If it had been treated, he added, Kayleigh would have lived.

Kayleigh had at least one older injury – a fractured rib that had already begun to heal, Cohen said. The injury could have originated more than a week before Kayleigh’s death or even months before, he said. The injury was “demonstrably older than the other injuries,” he said.

It may have been caused by shaking, squeezing or a direct impact to that area, Cohen said of the injury.

Cohen classified all of Kayleigh’s injuries, including the one that led to her death, as ranging from moderate to severe. They would not have resulted from spanking, he said.

“If one believes in spanking in general, I would say that spanking should not cause any bruising,” he added.

The prosecution showed nearly 40 photographs of Kayleigh’s autopsy to the jurors using a projector. Photos depicting bruising underneath Kayleigh’s scalp were discussed, but were not shown.

The first photograph was of Kayleigh’s face, neck and upper chest. Brownish fluid trailed from her right nostril toward her right eye, there was a large bruise in the middle of her forehead and her eyes appeared sunken.

Dr. Cohen marked the injuries with a black marker – an act he repeated for each of the 40 photos, including ones of Kayleigh’s insides. He also explained the difference between bruising and lividity – pooling of blood postmortem – which sometimes looked similar in photos.

Jurors appeared pensive and composed as they were shown photos of multiple bruises and abrasions on Kayleigh’s nude body as well as photos of organs and incisions.

Their tears didn’t start until Hafenstein ended his examination of Cohen by having the refrigerator that had been in Krueger’s apartment rolled up to the front of the gallery, adjacent to jurors.

Hafenstein put a mannequin the size of Kayleigh’s body into the freezer where both Krueger and Warner said she had been placed after her death.

Once the 41-inch mannequin was placed in the freezer, Hafenstein shut the door and asked Cohen if Kayleigh’s injuries could have occurred when she was put in the freezer. Cohen said they could not have.

Several jurors were crying as they walked by the refrigerator and out of the courtroom.

When they were gone, Krueger’s attorney, Jim McEntee, moved for a mistrial on the basis that Hafenstein’s performance was “unnecessary” and “proved nothing at all.”

“It’s simply here to inflame the passion of the jury,” McEntee said. Hafenstein had no response.

The trial is set to continue on Monday.