As the Hennessey Fire continued to flare in the deep woodlands of northeast Napa County, Bedolla had returned Sunday afternoon to see firsthand what nearly 500 square miles of flames had left behind at the home he had rented in the Berryessa Highlands community.

With blue gloves pulled over his hands and a black ballcap over his graying hair, the retired landscape construction worker toiled under a smoke-soiled sun, sifting through a mantle of ashes for any recognizable trace of the belongings he — and his neighbors along Arroyo Grande Drive — had been forced to leave behind when a lightning storm triggered the fire nearly two weeks earlier.

Bedolla stepped over broken bottles and dish shards from spot to spot, from what had been the kitchen and dining room to the footing of the vanished staircase. Only the sturdiest belongings had survived even as molten metal husks — a barbecue grill, a refrigerator bent into a crescent, three collectible slot machines and his Chevrolet pickup truck, steel belts remaining where the tires had liquefied. A pile of charred soup cans stood where the plastic recycling tote holding them had melted around it; the squishy object a visitor felt underfoot turned out to be a three-prong cultivator, its steel tines heated to taffy softness.

“It’s gone — this must be it, the shed,” Bedolla mused, picking a misshapen clump from the ashes. Metal? Plastic? It was impossible to tell.

“I wish I could’ve been here,” he said, recalling he had been visiting a relative in Vallejo when a neighbor phoned him about the fire’s approach to Arroyo Grande. “At least I would’ve had both my trucks loaded and ready to go. … It hasn’t hit home yet, but it will.”

An army of firefighters from across California and the nation has slowly beaten back the Hennessey Fire, the main component of one of the state’s largest woodland fires on record. By Monday morning, Cal Fire announced the LNU Lightning Complex — which also includes the Walbridge Fire in Sonoma County — had been 63% contained as fire crews took advantage of milder weather and lighter winds late last week.

Left in the fire’s wake, however, have been more than 1,200 destroyed structures and five deaths, including three people who were overtaken by the flames at their home on Highway 128 near Lake Berryessa on Aug. 19, the third day of the blaze.

And on Arroyo Grande Drive and Rimrock Drive and Black Oak Lane, and other streets above Lake Berryessa’s southern shore, a few evacuees were beginning to return to see whether their homes had survived — and to ponder how to start over if they had not.

The destruction was plain to see from the remains of Bedolla’s house up the cul de sac, where swaths of gray ashes and black soil dotted both sides of the street.

A few lots south on Arroyo Grande, a Napa County inspector had posted a red placard on a wooden post declaring a dwelling unsafe to occupy — an understatement for a two-story house whose walls had buckled inward like soggy cardboard. Across the street, the shell of a Jeep still stood where flames had consumed the surrounding garage, while a concrete retaining wall was all that remained of another home.

“I literally had 15 minutes before the (vehicle-mounted) sirens went up the street, telling us to evacuate,” said Richard Wilson, who lost his home of 28 years in the fire. Leaving Berryessa Highlands in a neighbor’s compact car and slowed by two injured ankles, he could grab only some photos and some dog and cat food before departing Aug. 19.

A Buddha and dog busts from a pet grave on Wilson’s property had survived, but his 18 pet birds had not.

As Wilson surveyed the remains of his home accompanied by his dachshund Pipichan, two neighbors had returned to their own ruins, hoping that some valuables might somehow be found intact.

A fire-warped steel tool chest still stood in the rubble, and Frank Brugioni forced open one drawer after another, finding a couple of vises but not the tool set that had belonged to his grandfather. A few yards away, his wife Gaby scattered a handful of feed to coax from the backyard woods one of the couple’s 23 roosters, all but five of which have been rounded up by neighbors after scattering during the wildfire.

The Brugionis had committed to settling at the Berryessa Highlands, even after evacuating three times during the October 2017 wildfires that tore through swaths of the North Bay and killed more than 40 people. After initially renting, the couple purchased their home from its owner last October — and now planned to rebuild despite the difficulty of speedily collecting insurance payments.

“It’s really sad, but we knew the risks,” said Gaby, who along with her husband had visited the remains of their home late last week. “It’s not like those poor people in Santa Rosa or Vacaville, where you’re living in a city and the last thing you think about is a wildfire.”

While Bedolla, Wilson, the Brugionis and other neighbors picked through the remnants of their homes, teams of firefighters were continuing to work 24-hour shifts (with 24 hours of rest) mopping up the Hennessey Fire, aided by generally favorable temperatures and the absence of flame-fanning wind gusts.

“The weather was cooperative the last couple of days, which allowed us to get into areas we couldn’t get to prior,” Cal Fire spokesman Will Powers said midday Sunday at the Napa County Fairgrounds in Calistoga, the base of operations against the LNU Lightning Complex.

With fire lines established on much of the Hennessey Fire’s perimeter, much of the battle is now taking place to the north and east of Lake Berryessa where terrain is steeper, woodlands denser and access more difficult. The most active remaining firefighting area is off Highway 16 northeast of Napa County, operations section chief Chris Waters said during Cal Fire’s Monday briefing in Calistoga.

Also Monday, Napa County announced the lifting of more evacuation orders, including for the Berryessa Highlands and Steele Canyon Road, which connects the community to Moskowite Corner in the south. But Undersheriff Jon Crawford cautioned would-be onlookers to respect evacuees checking on their homes, or their remnants.

“Occasionally — more than occasionally — they’ll find they literally have to sift through the ashes of their lives and their property,” he said in Calistoga. “So we ask that you realize this is not a time for sightseeing, but for recovery.”

At the Berryessa Highlands, Bedolla faced the prospect of receiving assistance without renter’s insurance or much in the way of receipts to document his possessions, yet seemed steadfast in his will to start over.

“I don’t let stuff get me down,” he said Sunday while standing where his house once had. “I go to work and get to business.”

There is still some burning within the fire perimeter, Cal Fire said.

Scores of fundraisers have been set up to support survivors of the fires that have racked northern Napa County.

Losses in the fires of October 2017 were nearly three times greater.

Calistoga escapes damage from LNU Complex Fires, others not so fortunate

As portions of Napa Valley and neighboring counties experienced destruction, loss of life, and evacuations, the City of Calistoga escaped the fires intact.

News: Duncan and Ana Vigil Footman and their extended family evacuated to Ana's Cantina and were glad to have a roof over their heads.

The City of Calistoga will be purchasing a low-power AM radio for broadcasting messages to residents and visitors during emergencies.

The City of Calistoga is making a minimal investment on a $1 million line of credit, should the need arise.

A heat wave with triple-digit temperatures is predicted for the Labor Day weekend.

Duncan and Ana Vigil Footman and their extended family evacuated to Ana's Cantina during the Hennessey Fire.

Here are tips to reduce power consumption during critical hours.

The Boys & Girls Clubs of St. Helena and Calistoga ramped up their meal program during the fires, with help from chef José Andrés' World Central Kitchen.

City of St. Helena: How to avoid heat-related illnesses

The City of St. Helena releases tips on how to stay safe during high temperature days.

Letters: We need a five-year extension.

Displaced fire evacuees — living in RVs at the Napa Valley Expo — have until Feb. 8 to find long-term housing elsewhere because of the Expo's contractual obligations in 2021.

The suspect is accused of starting the Markley Fire in Vacaville last August that merged with fires in five other counties, including Napa, to become the LNU Lightning Complex. 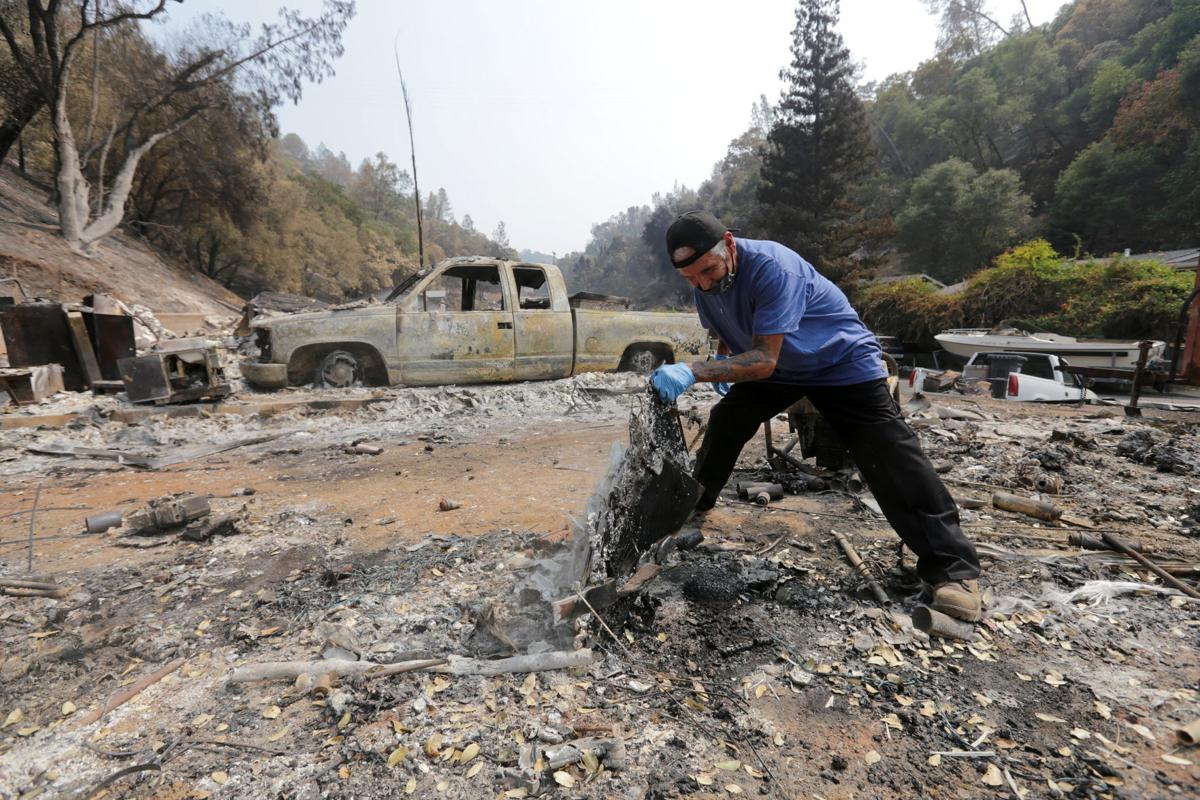 Joe Bedolla, who rented a house in the Berryessa Highlands subdivision in rural Napa County, returned Sunday to search the remains left by the destruction caused by the Hennessey Fire. Bedolla and other residents evacuated the community Aug. 19, two days after lightning strikes triggered the fires that have destroyed more than 1,200 buildings in the North Bay. 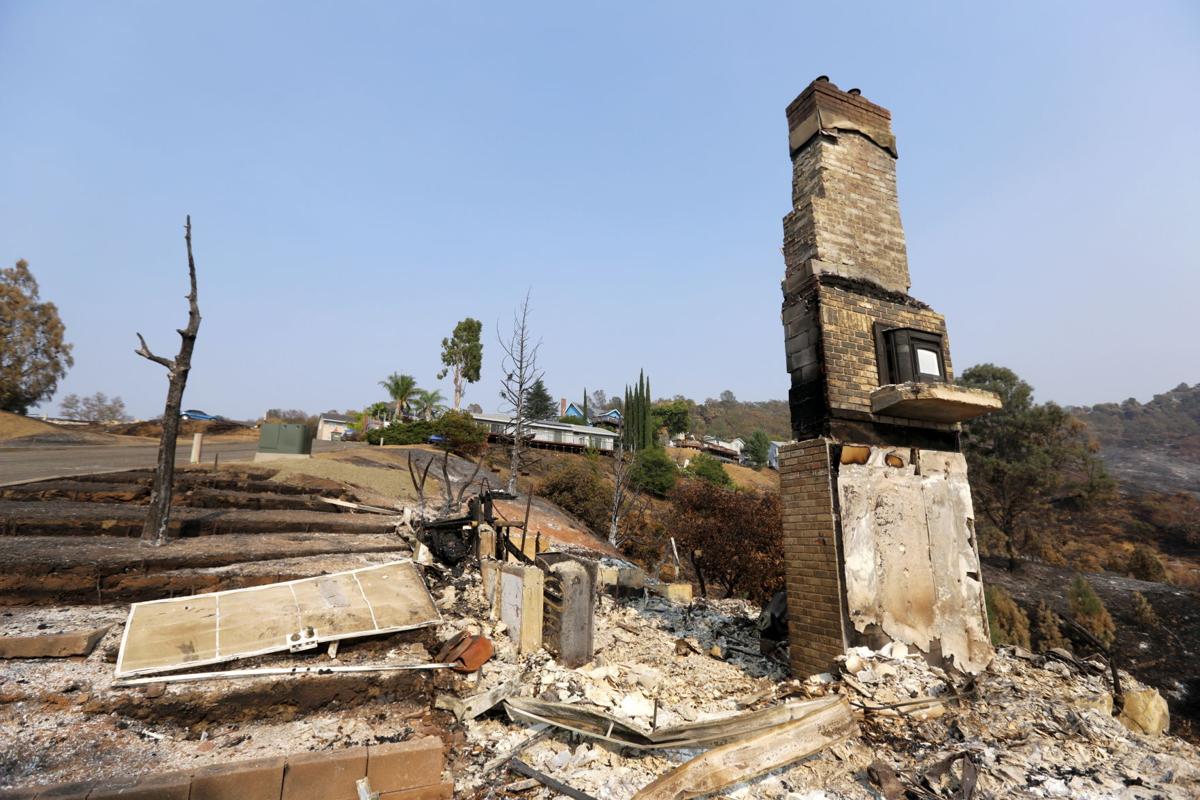 A brick chimney was all that remained of a burned-out home on Black Oak Lane in the Berryessa Highlands, where numerous homes succumbed to the Hennessey Fire that erupted Aug. 17. 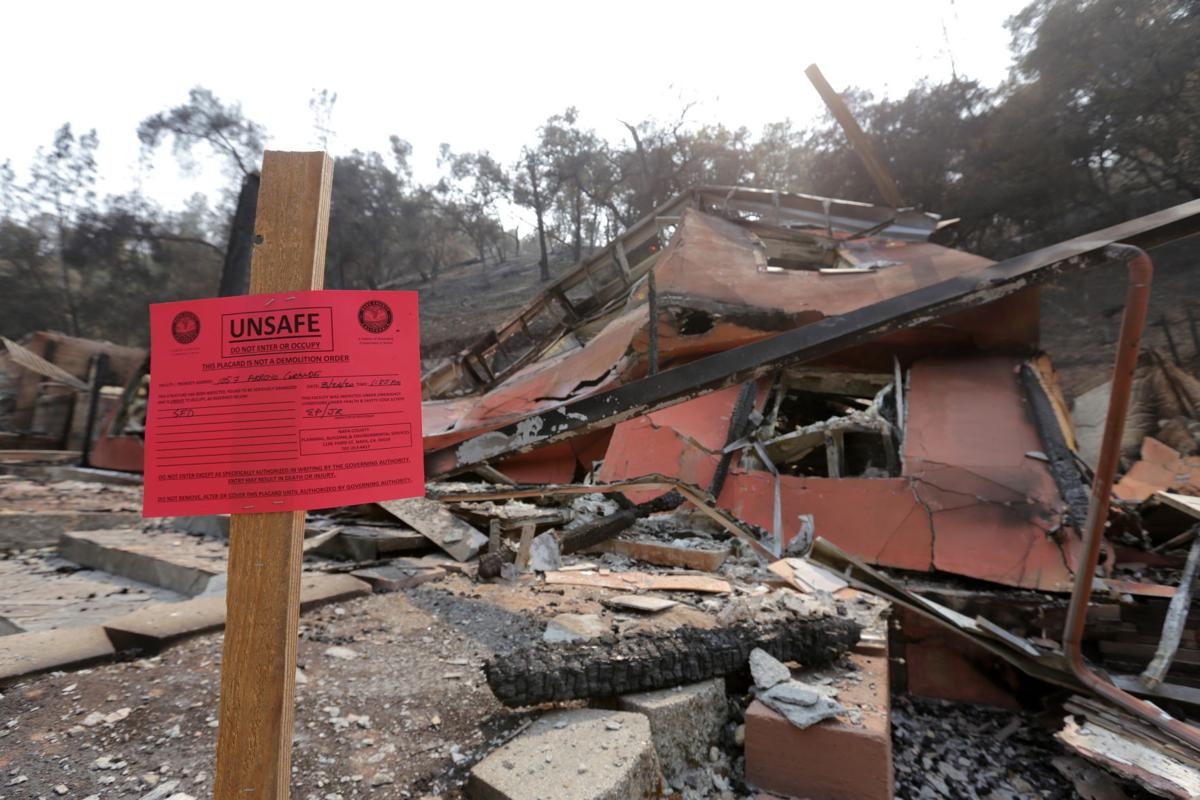 A Napa County inspector's red tag marks as uninhabitable a two-story house on Arroyo Grande Drive that collapsed when the Hennessey Fire spread to the Berryessa Highlands, a community near the southern tip of Lake Berryessa. 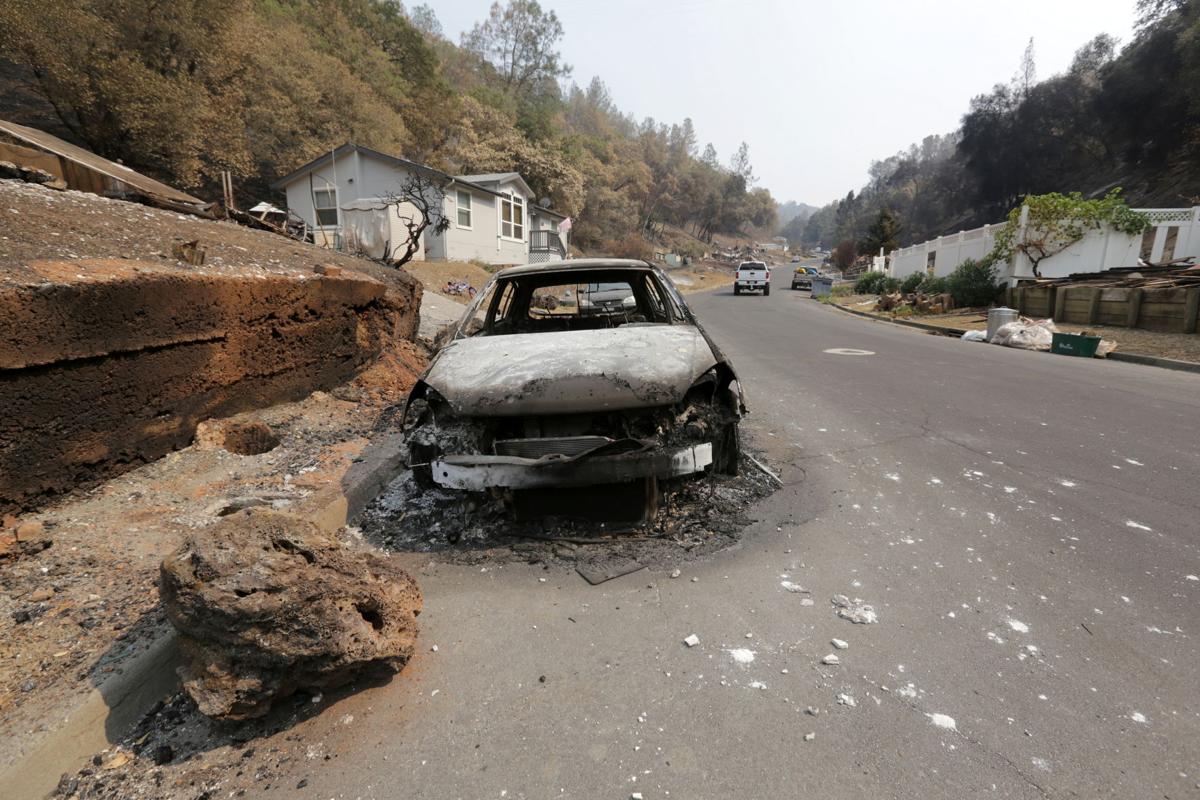 The Hennessey Fire reduced numerous vehicles at the Berryessa Highlands to scorched husks, and also damaged other cars parked outside homes that otherwise emerged intact from the blaze. Some residents of the rural Napa County community have begun returning to check on their homes, or to search destroyed dwellings for any surviving possessions. 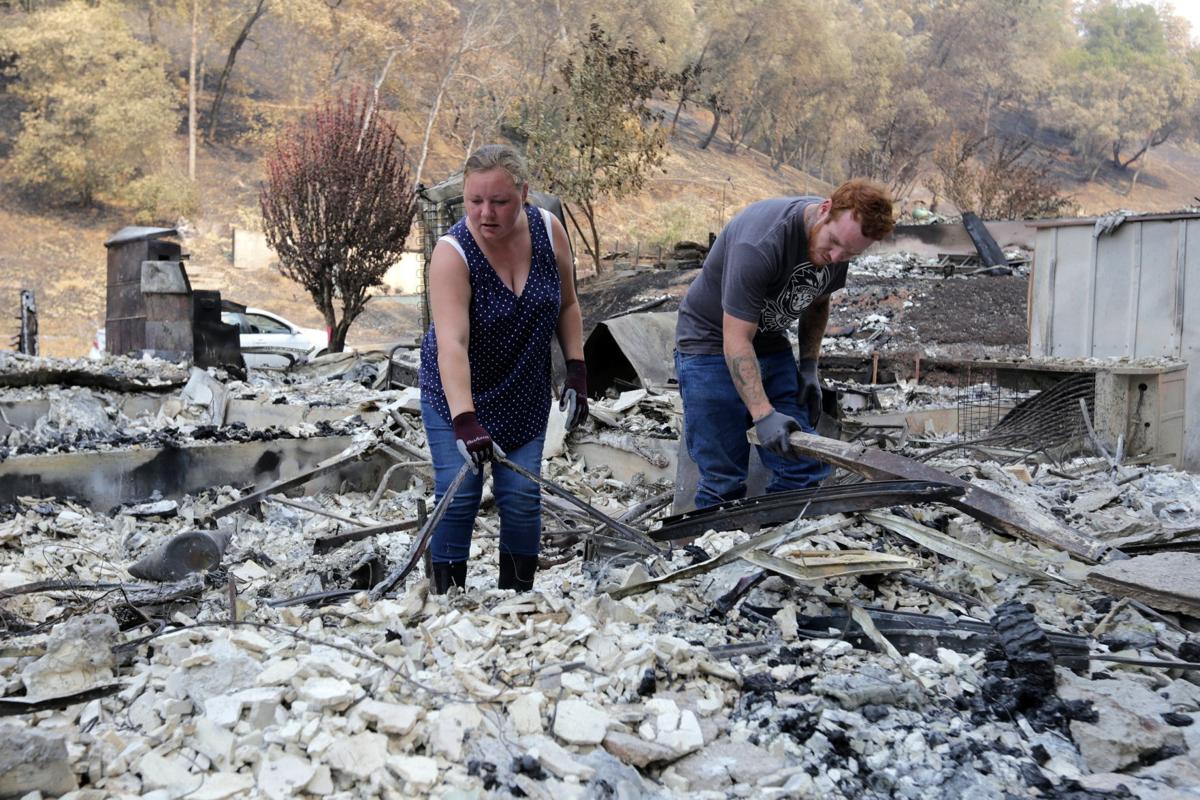 Gaby and Frank Brugioni returned to their house at the Berryessa Highlands on Sunday to assess the destruction left behind by the Hennessey Fire, which was sparked by lightning Aug. 17 and forced the evacuation of communities around Lake Berryessa.