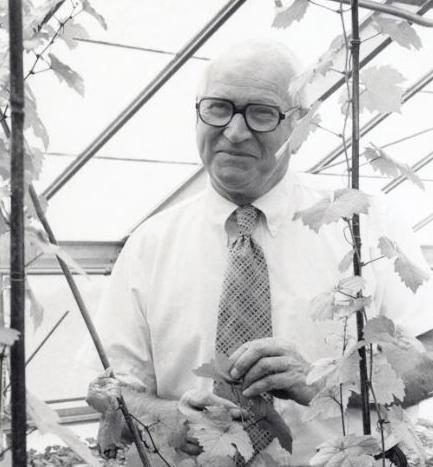 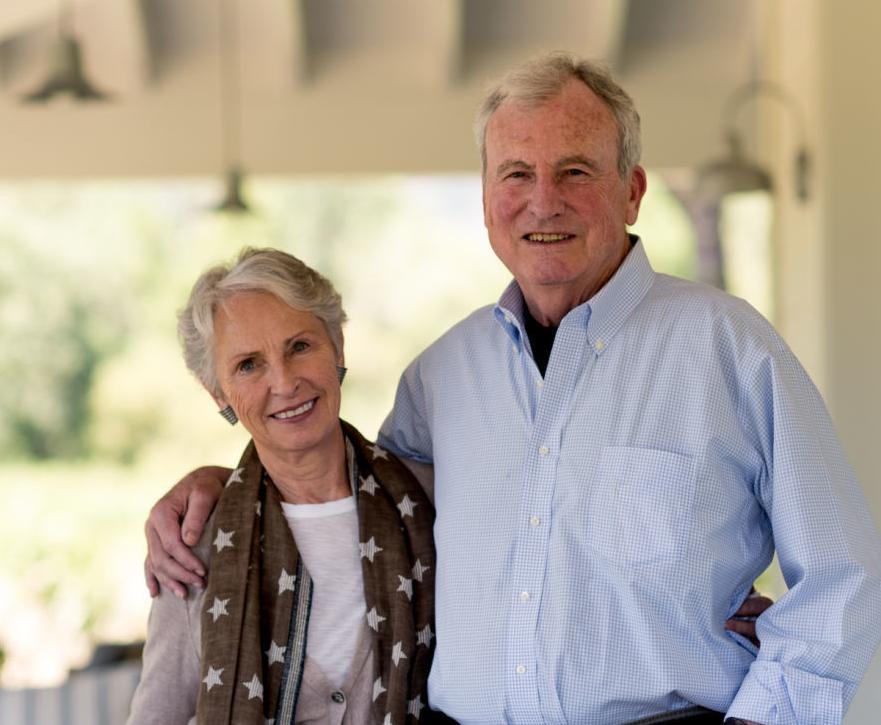 Katie Solari Baker and husband Cam Baker, proprietors of Larkmead Vineyards. The Bakers made a $200,000 to U.C. Davis that will be used to digitize the work of Dr. Harold Olmo. 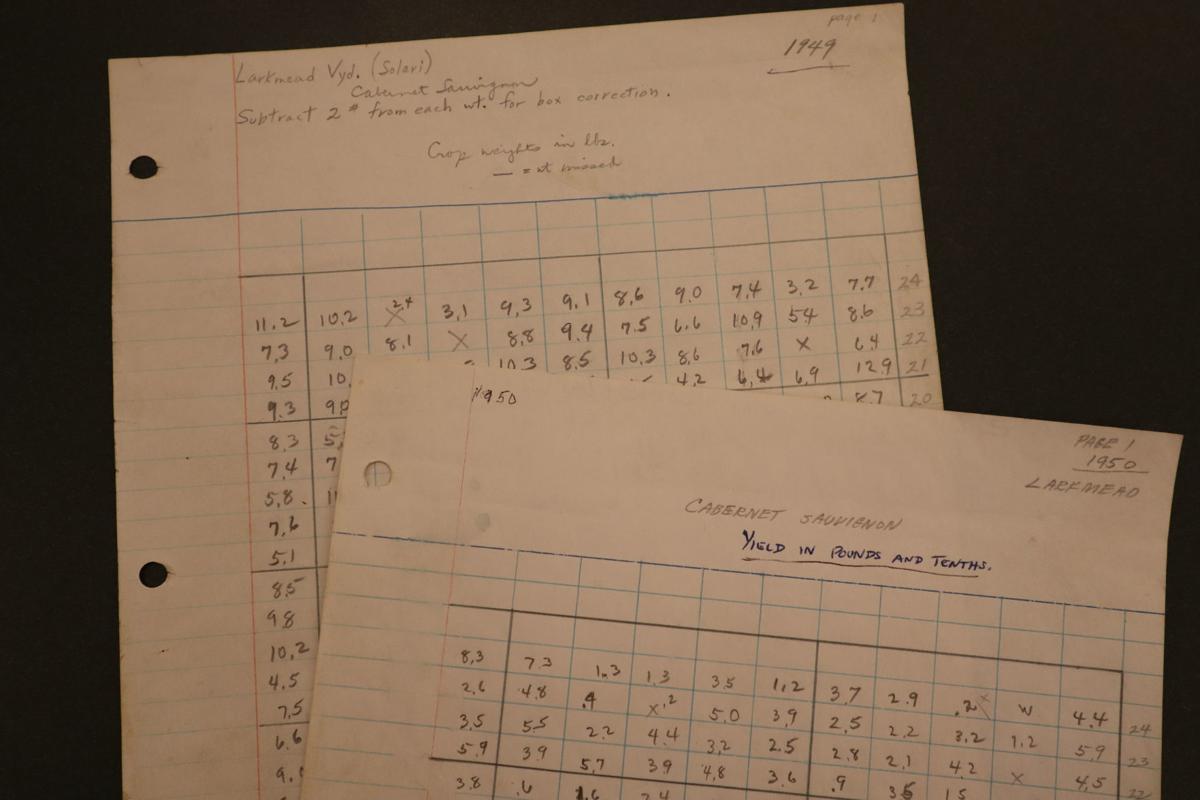 Handwritten research data from 1949 and 1950 at Larkmead Vineyards, part of the Olmo Papers.

Katie Solari Baker and husband Cam Baker, proprietors of Larkmead Vineyards. The Bakers made a $200,000 to U.C. Davis that will be used to digitize the work of Dr. Harold Olmo.

Handwritten research data from 1949 and 1950 at Larkmead Vineyards, part of the Olmo Papers.

The owners of Larkmead Vineyards have announced a $200,000 donation to the University of California, Davis, in honor of the winery’s 125th anniversary.

Larkmead proprietors Katie Solari Baker, daughter of former owner Larry Solari, and husband Cam Baker made the donation to spur university efforts to digitize the research collection of Professor Emeritus Harold Olmo, who Cam Baker described as “one of the most influential viticulturists” of our time.

Olmo’s collection, called “The Olmo Papers,” is the product of his decades-long career as a scientist and viticulturist at the forefront of wine grapegrowing, according to Kevin Miller, university archivist and interim head of archives and special collections at the U.C. Davis Library.

Olmo’s work, in its physical form, comprises more than 100 large boxes of papers – letters, data, photographs and hand-drawn maps of experimental vineyard blocks, according to Miller.

“He was an extremely significant figure in viticulture working with grapes and grape varieties,” Miller said of Olmo, who died at age 96 in 2006. Among Olmo’s most important achievements, Miller said, is the impact he had on the movement of different grape varieties around the world.

Olmo’s research with wine grape varietals lent itself to time abroad: he spent parts of his life in wine grapegrowing regions as far away as Australia and Europe. Much of his important work was done domestically, though, including in Napa – some of it in vineyards that Larkmead still owns today, according to Larkmead’s winemaker Dan Petroski. Before Davis’ Oakville Station, Dr. Olmo tended to experimental vineyard blocks at Larkmead, Petroski said.

The work that Olmo would go on to do at the Oakville station would ultimately produce the Oakville clones, famous strains of Cabernet that would seal Napa’s reputation as an ultra-premium wine grapegrowing region.

“Napa Valley owes much of its success as a wine region to him,” Baker said in a press release.

Before Petroski was a winemaker, he worked in publishing; when he arrived at Larkmead as an assistant winemaker, the Bakers dubbed him the winery’s unofficial historian, Petroski said. He’d heard talk of Olmo’s research vineyards at Larkmead, and discovered that Olmo had planted Cabernet at Larkmead in 1939, before the creation of Oakville Station.

Petroski obtained a letter from Olmo to a fellow viticulturist that confirmed he’d moved the Cabernet clones Oakville Station from vineyards at Larkmead.

“I was like – wow, the Oakville clones are from Larkmead,” he said. And he was struck by Olmo’s apparent premonition. “That was 1939, when Napa was prune and oak trees. It wasn’t Cabernet country, and he planted Cabernet – before anyone else.”

Larkmead has a “Dr. Olmo” wine label in the viticulturist’s honor, made from Cabernet vines planted in the very vineyards Olmo is thought to have used for research, Petroski said.

And Olmo was indeed ahead of his time – in 1984, only 6 percent of California’s wine grape crop was Cabernet, according to Petroski. He said Olmo’s insight could have been the product of his extensive research around grape varietals and climate. And though his work dates over half a century, Petroski said it’s more relevant than ever in the face of today’s changing climate.

For that reason, the Bakers have donated the $200,000, Petroski said. They’re hopeful Olmo’s research will be of aid to today’s viticulturists and enologists.

“A digitization project done well democratizes access to the collection,” Miller said. “(Currently) researchers need to physically travel to us to access the material, and that’s a huge financial burden for most people.”

Scanning and digitizing a collection like Olmo’s could be advantageous for other reasons, Miller added: each of its components will be contextualized as the collection is organized. Hand scrawled notes and listless pieces of individual data may not make sense as separate pieces of the collection, but could be a resource of invaluable proportion for scientists once they’re sorted and paired correctly.

Once the project is completed – Miller says it could take about a year and a half – the Olmo Papers will be searchable for keywords, similar to Google Books, allowing even more efficient access.

“Olmo’s papers get a lot of research consideration, and (as a result we’ve come to the) realization that there are certain problems with the catalog,” Miller said, referring to the collection’s index. “We’ve actually wanted to take the first step of (digitizing) for quite some time.”

Earlier this year, Larkmead began its own experimental vineyard block in the face of climate change. It’s part of a “culture of experimentation” at Larkmead that the Bakers say Olmo helped create. Petroski, for his part, hopes Olmo’s work will foster curiosity and growth industry-wide.

“We’re hoping we find information relevant to today based on questions (the industry) asked itself when Dr. Olmo was working,” Petroski said.

The Bakers’ donation will help jumpstart that process. Petroski says it’s in theme with Larkmead’s take on its 125th anniversary in 2020.

“It was almost like – who cares? Everyone has a birthday, an anniversary,” Petroski said. “But what’s the future? The most important part of what we can do next is giving back to historical precedent and education, and find something to propel us forward.”

From Napa Valley to Australia, advancing the science behind smoke taint in wine grapes

Smoke taint is a huge risk for the wine industry, but poorly researched. Scientists want to change that.