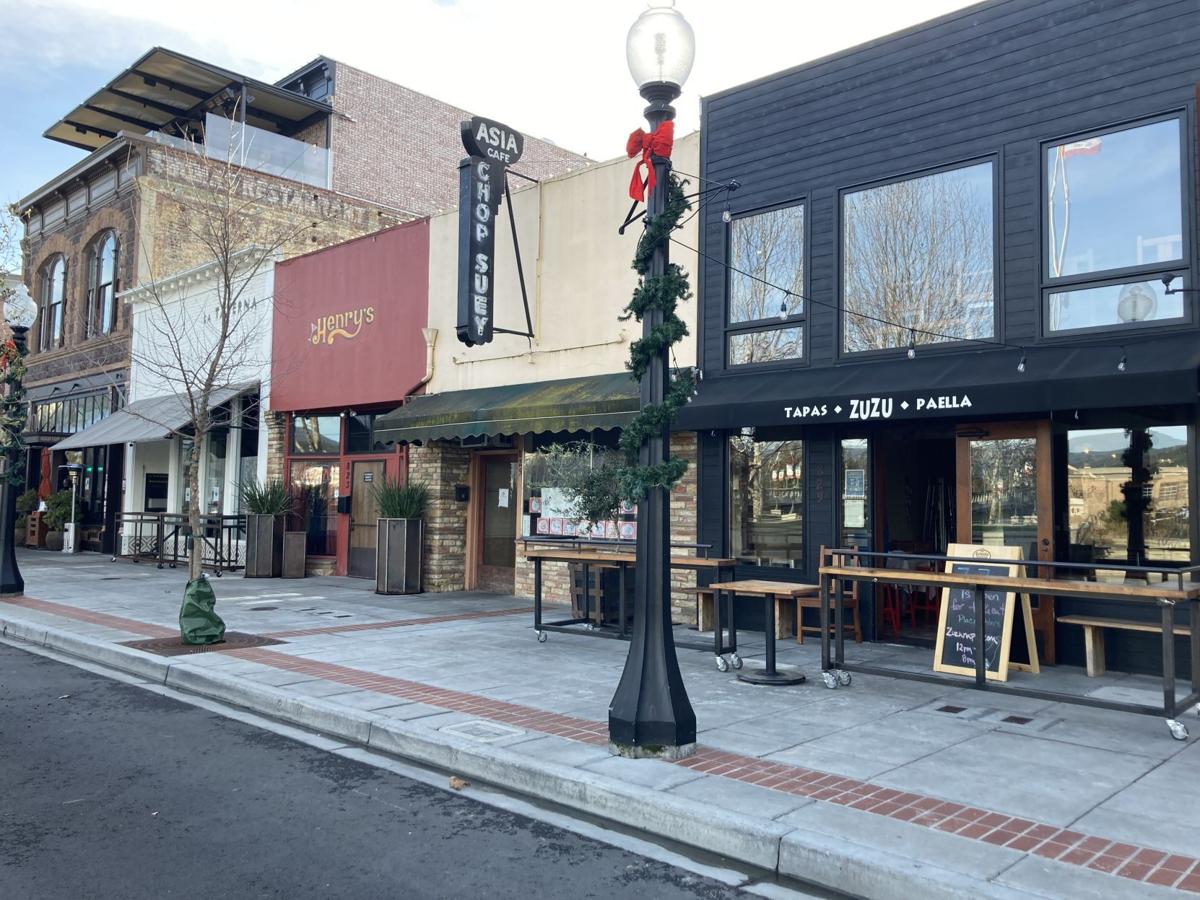 Empty sidewalks amid restaurant shutdowns in early January. Operating on a to-go only basis has prompted layoffs and furloughs across Napa's restaurant and hospitality industries. 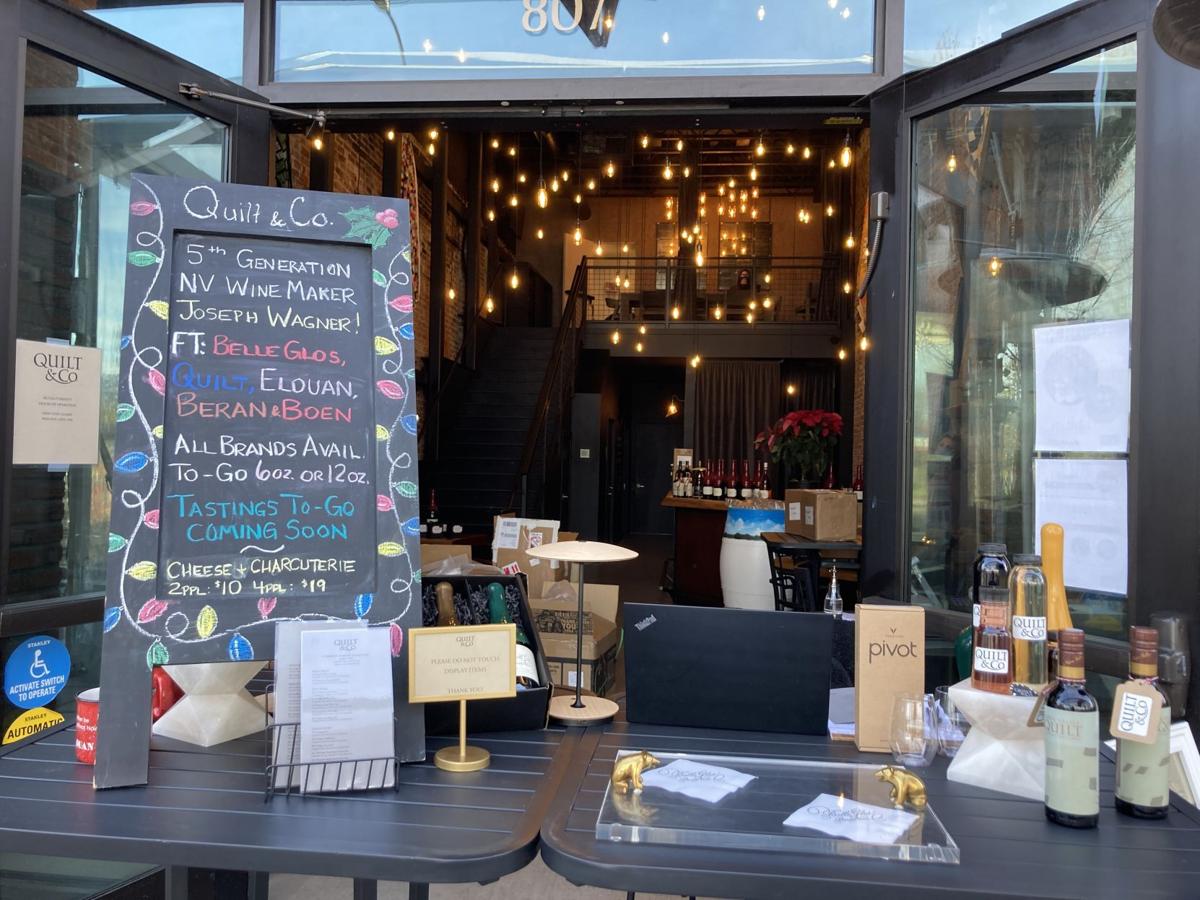 A small sign outside of AVOW in downtown Napa advertises soon-to-come wine tastings to go. With neither indoor nor outdoor seating permitted in Napa County, many restaurant industry workers have again found themselves out of work. 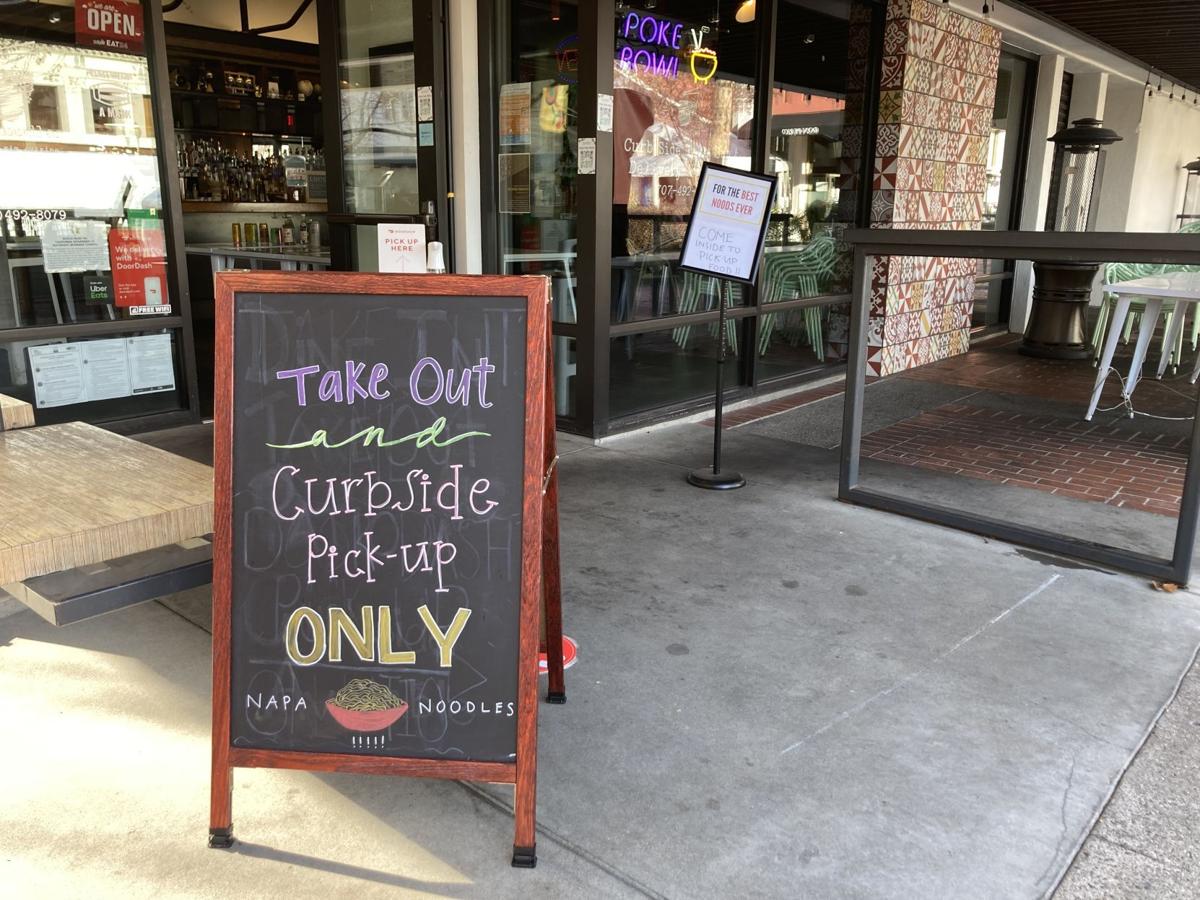 A sign advertises to go orders outside of Napa Noodles in downtown Napa. A shutdown order issued in the wake of climbing coronavirus cases and hospitalizations has relegated restaurants in the region to take-out service only, prompting waves of layoffs.

It was the second time in 10 months that Martin, 43, had been let go from a job in the North Bay’s service industry. He’d been brought at mid-year to manage The Deck, the restaurant planned at the new Ace & Vine card room in downtown Napa, but the job ended when news of the looming, comprehensive shutdown broke in December.

After being let go from a job at a hotel in neighboring Yolo County in the spring, he was never successfully able to get in touch with California’s Employment Development Department (EDD), which disperses unemployment insurance checks.

“There have been a lot of sleepless nights,” he added.

The American economy lost 140,000 jobs in December, according to the jobs report released by the U.S. Department of Labor Friday morning. This is in part due to a new wave of lockdowns prompted by rising COVID case rates, hospitalizations and deaths nationwide.

In California, which is experiencing its third and by far most severe wave of the virus, four of the state’s five regions are under lockdowns similar to the kind enacted at the pandemic’s onset in March. Tougher restrictions were placed on the Bay Area, which includes Napa County, in mid-December after regional intensive care unit (ICU) capacity dipped below 15%.

Under the new order, Napa’s restaurants must now operate on a to-go basis only — a regression from the spring and summer, when the valley’s restaurants were for a time permitted to host guests indoors at 50% capacity. That dramatic fluctuation has resulted in dramatic job losses for workers in the service industry, many for the second time.

For Joshua Homer, who moved to Napa to begin work as a sous chef at Carneros Spa and Resort’s FARM restaurant, the closures were expected, but devastating nonetheless.

“When we first got shut down, it was like — how long is this one going to last? How long will I be out of work? What am I going to do?” said Homer. In the spring, he’d been furloughed from a job as a sous chef at Cotogna in San Francisco, said.

“There was definitely a week and a half of just moping around where I didn’t know what to do. I was asking myself — do I need to go back to school and find a different industry to get into?”

Homer, whose father was also a chef, has pushed off his exit from the industry for now: he’s begun a fresh pasta business, dubbed Pastaria Il Sogno, out of his home, and is offering deliveries in Napa County Fridays and Saturdays. The limited income he’s made from that has helped supplement the unemployment checks he is receiving, Homer explained. Even so, things are tight.

Some in the region’s hospitality or service industries, like lifelong Napa resident Alana Pontecore, have avoided a second layoff only because they have not been able to find work since the first. Pontecore, who ran guest services at a hotel in St. Helena, said she began applying for new jobs after her return to work kept getting pushed back.

“I started looking at other options — just any kind of jobs that would get me into the workforce until the hotel reopened,” said Pontecore, who is expecting her second child in February. “I applied for numerous positions in administrative or service work, sales work and I wouldn’t even get a call back.”

Though Pontecore and her husband — a member of the restaurant industry who has also been in and out of work — have been receiving financial assistance from family, they’re still triaging bills and making minimum payments, she said. But by far the most stressful part of the last 10 months has been the loss of her employer-based health insurance, she said.

“I was basically in this bracket of people who didn’t qualify for any government-issued assistance you could possibly have,” she said. Her pre-pandemic income made her ineligible, even though she has not made any money since March.

Ultimately, the pair joined a plan Pontecore’s husband’s employer, the restaurant at SingleThread Farms in Healdsburg, has continued to offer its employees even through the closures. It’s costlier than the plan Pontecore was offered through her work, she said, but far more doable than private insurance — and with a new baby on the way, time was running out.

Martin, who finally began receiving his unemployment checks a few weeks ago only to have them frozen again as the department investigates fraudulent claims, voiced his frustration with the rationale behind the shutdowns.

“I can stand elbow to elbow with strangers in Walmart and Costco for 30 minutes, but I can’t go to NapaSport or Angele and sit down to have a burger six feet away from everyone else with a mask on,” he said. “I’d really like to see better data as to how (restaurants) are contributing to the spread of the virus.”

A study published by Stanford and Northwestern researchers in the journal Nature in November correlated businesses, including full-service restaurants, gyms, hotels and cafes, to so-called ‘superspreader’ events. Reopening restaurants “has the largest predicted impact on infections due to the large number of restaurants as well as their high visit densities and long dwell times,” according to the study, which looked at the 10 largest US metro areas.

But its models suggest precautions like wearing masks, social distancing and reducing indoor capacity “may be more effective” than widespread lockdowns at less cost to the economy.

Martin says his frustration is partly rooted in concern not just for himself, but for the culinary landscape in Napa and nationwide. Mom and pop restaurants are struggling, including businesses owned by friends and colleagues here, he knows.

Homer, the sous chef, described his pre-pandemic affinity for supporting restaurants. Going out to eat is no longer something he can afford.

“It’s not only important to me — now it’s important to them, to have that support from our community,” he said of dining out. “But I’m struggling so much now that I can’t help these struggling restaurants. And I want to help so they survive, so I have somewhere to go back to work, but that’s now almost impossible for me to do.”

Watch Now: Almost 30,000 jobs lost in the restaurant and dining sector in 2020 bloodbath

After shutdowns, fires and now a regression into the purple tier which forbids indoor dining, some restaurants are closing their doors. Others say they'll plow on.

The lawsuit, spearheaded by a roster of Napa County restaurants and wineries, seeks to overturn the ban on outdoor dining and wine tastings.

Locally, this will allow restaurants and wineries to resume outdoor service, and barber shops and hair salons to reopen

3,100 more Napa County residents looking for a job compared to a year ago

Job news: Napa County's jobless rate is up, but some industries have been hiring. Read on.

California's EDD system has been dysfunctional for vast numbers of residents statewide. For some Napans, the missing checks had been their lifeline during the pandemic.

California State Sen. Mike McGuire, D-Healdsburg, has introduced a bill that would allocate $45 million toward a "Calling All Californians" advertising campaign encouraging in-state travel once the California Department of Public Health has cleared the way.

Napa restaurants welcome return to outdoor dining, but hope indoor dining is next

Napa County and its five cities will decide incoming months how to spend millions of dollars from the federal COVID-19 stimulus package.

Many businesses felt forced to cut staff amid shutdowns. Some employees left the hospitality industry or moved, leaving behind a gap in Napa Valley's tourism workforce.

Napa City Council will consider this week whether to allow the city's only card room to stay open 24 hours.

Empty sidewalks amid restaurant shutdowns in early January. Operating on a to-go only basis has prompted layoffs and furloughs across Napa's restaurant and hospitality industries.

A small sign outside of AVOW in downtown Napa advertises soon-to-come wine tastings to go. With neither indoor nor outdoor seating permitted in Napa County, many restaurant industry workers have again found themselves out of work.

A sign advertises to go orders outside of Napa Noodles in downtown Napa. A shutdown order issued in the wake of climbing coronavirus cases and hospitalizations has relegated restaurants in the region to take-out service only, prompting waves of layoffs.