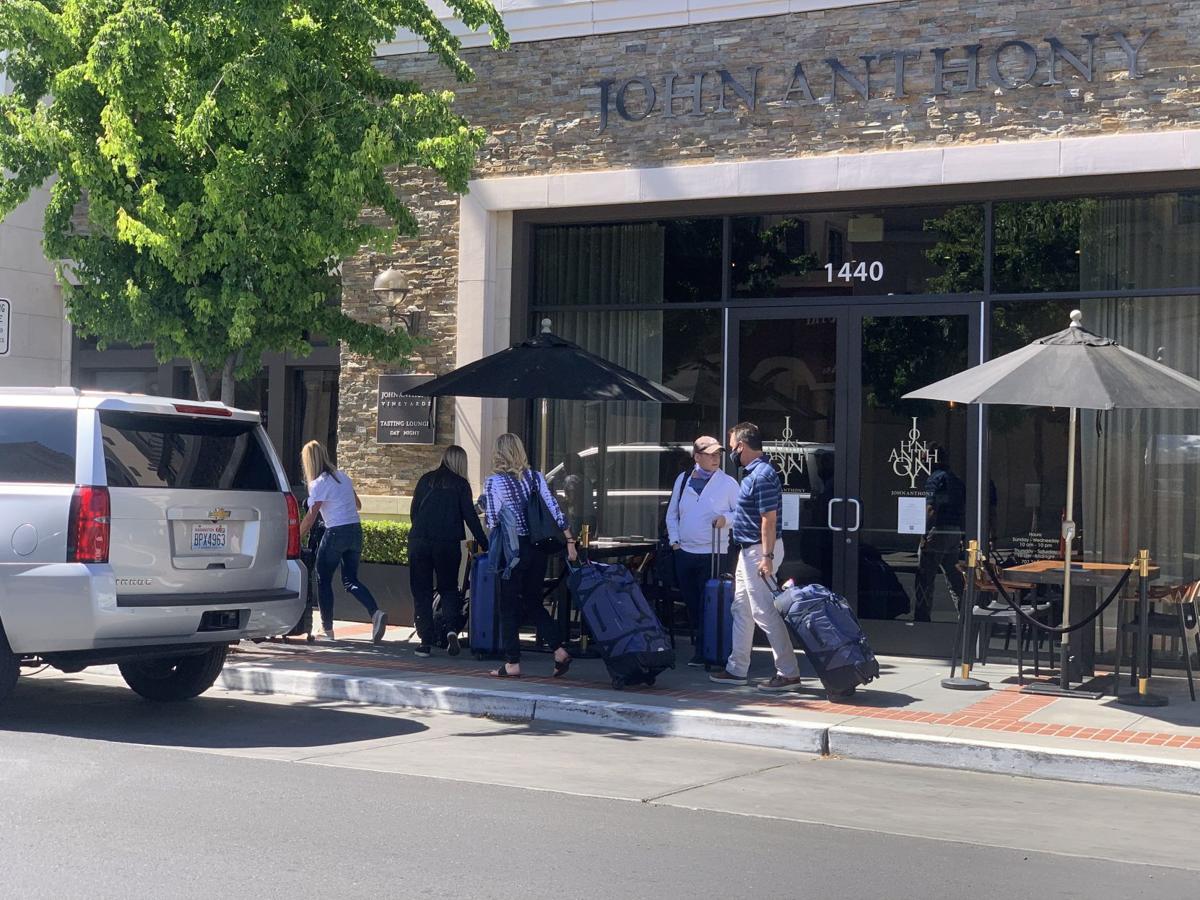 Napa County hotel managers and owners have seen a noticeable increase in the number of leisure travelers, they report. Occupancy is up, and hotel managers expect it to rise in the coming months. Now that more people are being vaccinated, people want to travel again, hoteliers say. This party was checking into the Andaz Napa. 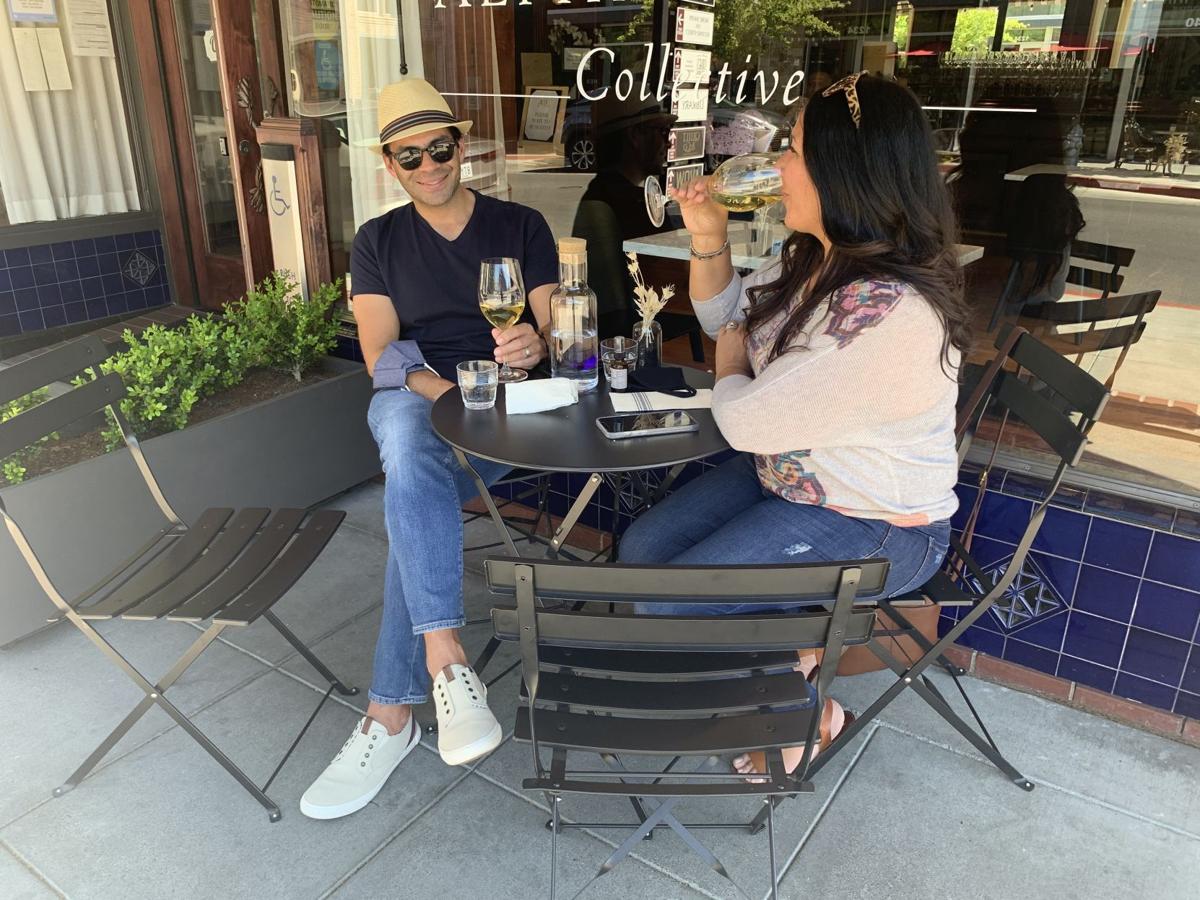 Napa County hotel managers and owners have seen a noticeable increase in the number of leisure travelers, they report. Occupancy is up, and hotel managers expect it to rise in the coming months. Now that more people are being vaccinated, people want to travel again, hoteliers say. This couple was from Sacramento.

Been to downtown Napa on a Friday or Saturday night lately?

Visitors are back — and hotel operators couldn’t be happier.

According to data from Visit Napa Valley and STR, occupancy at Napa County lodging properties rose to 49.8% in March, with an average daily rate of $261.

“Napa Valley is fortunate to have a significant drive market, and leisure business has once again shown signs of strong recovery following the December/January shelter at home orders,” said Linsey Gallagher, CEO of Visit Napa Valley.

Even with this spring rebound, Visit Napa Valley projects Napa Valley's tourism improvement district revenues from lodging will be down 65 to 70% in the current fiscal year ending in June, said Gallagher.

“Currently we forecast Napa County tourism revenues to increase 75% for fiscal year 2022, which would still be 40% below pre-pandemic levels," she said.

At the Archer Hotel Napa, reservations have gone “through the roof,” said Michael Collins, general manager. “It’s been a wild ride.”

“Our weekends in May are almost already full,” said Sara Brooks, general manager at The Napa River Inn.

We are definitely seeing an uptick,” even with walk-in guests, said Anil Patel, owner of the Hawthorn Suites by Wyndham Napa Valley. “It’s crazy.”

Patel attributes those short booking patterns to “people deciding last minute they want to simply get out and go somewhere, i.e. Napa.” This is a trend he expects to continue this summer.

The Archer's Collins said that leisure travel has increased “a ton” at his downtown Napa hotel. Currently, about 90% of his business is personal travel, although the hotel did host a group last week and will do so next week.

The general manager said that the effect of Napa County dropping into the less restrictive orange tier was instantaneous. Once that changed, “We were 75 to 80% occupied that weekend and the next weekend sold out.”

“It went from zero to 100 in no time,” said Collins. “It was amazing. It was like the fire hose was turned on.”

The majority of the visitors are from within driving distance, he said, such as the Bay Area. “But we’re seeing people from across the country,” such as Florida, New York, and Chicago. “They know Napa is open and they are traveling again.”

He thinks vaccinations are leading the charge. Because Napa County has a steady immunization program, “that puts a good amount of faith into the traveler as well.”

“I think that trend is going to continue into the summer,” said Collins. It’s only going to get busier and we’re going to see a nice uptick in business.”

“Downtown is going to be busting at the seams,” predicted Collins. He noted that the Charlie Palmer Steak restaurant inside the hotel just reopened and “we’re seeing great traction there.”

“We’re in a good place right now and I think it’s only going to get busier.”

Brooks said the Napa River Inn is “definitely seeing an increase in reservations coming in for the next couple of months.”

In a “normal” year guests would include a mix of vacationers, business, and corporate guests. However, business travel hasn’t fully resumed so today, most of those reservations are leisure travelers.

For the next few months, “I think we will continue to see a big influx of leisure travel. That’s the pattern. We’re just hoping it spread out over the weekdays as much as the weekends,” Brooks said.

John Patel, the owner of the Cedar Gables Inn of Napa, echoed the other hoteliers. His inn is about 50% occupied now, he said.

He estimated that about 60% of his guests come from within 100 miles of Napa.

“They are all overjoyed to get out,” he said. “They are ready to travel now.”

He’s not sure what to expect in the coming months but estimated that occupancy will rise up to around 60 to 65%.

Yet Patel remains cautious. “Is (there) going to be any other catastrophe? Another lockdown? We’ll see. I think a lot of people did get vaccinated, so there is hope.”

Australia lost one-third of its koalas in three years

Australia lost one-third of its koalas in three years

Napa's Jeffries General offers the essentials plus much more

Heard of the Adventure Tuesday Club? Napa's Jeffries General offers the essentials plus much more.

Been to the new Napa Valley Welcome Center yet? It might surprise you.

Temporary dining and recreation uses are proposed for the former Copia south garden space, to be known as Oxbow Yard.

Abide Medical Cannabis Dispensary is now open in downtown Napa. What's it all about?

A $7.4 million infusion from the American Rescue Plan Act is a key to the city's new budget, and to its plan to fill dozens of vacant positions.

Napa County began the week with 24 new COVID-19 cases, with hospitalizations declining to their lowest level in two weeks.

Napa Valley tourism has rebounded after COVID-19 restrictions were lifted by the state, but the industry hasn't yet recovered from the pandemic to meet demand.

Napa County hotel managers and owners have seen a noticeable increase in the number of leisure travelers, they report. Occupancy is up, and hotel managers expect it to rise in the coming months. Now that more people are being vaccinated, people want to travel again, hoteliers say. This party was checking into the Andaz Napa.

Napa County hotel managers and owners have seen a noticeable increase in the number of leisure travelers, they report. Occupancy is up, and hotel managers expect it to rise in the coming months. Now that more people are being vaccinated, people want to travel again, hoteliers say. This couple was from Sacramento.