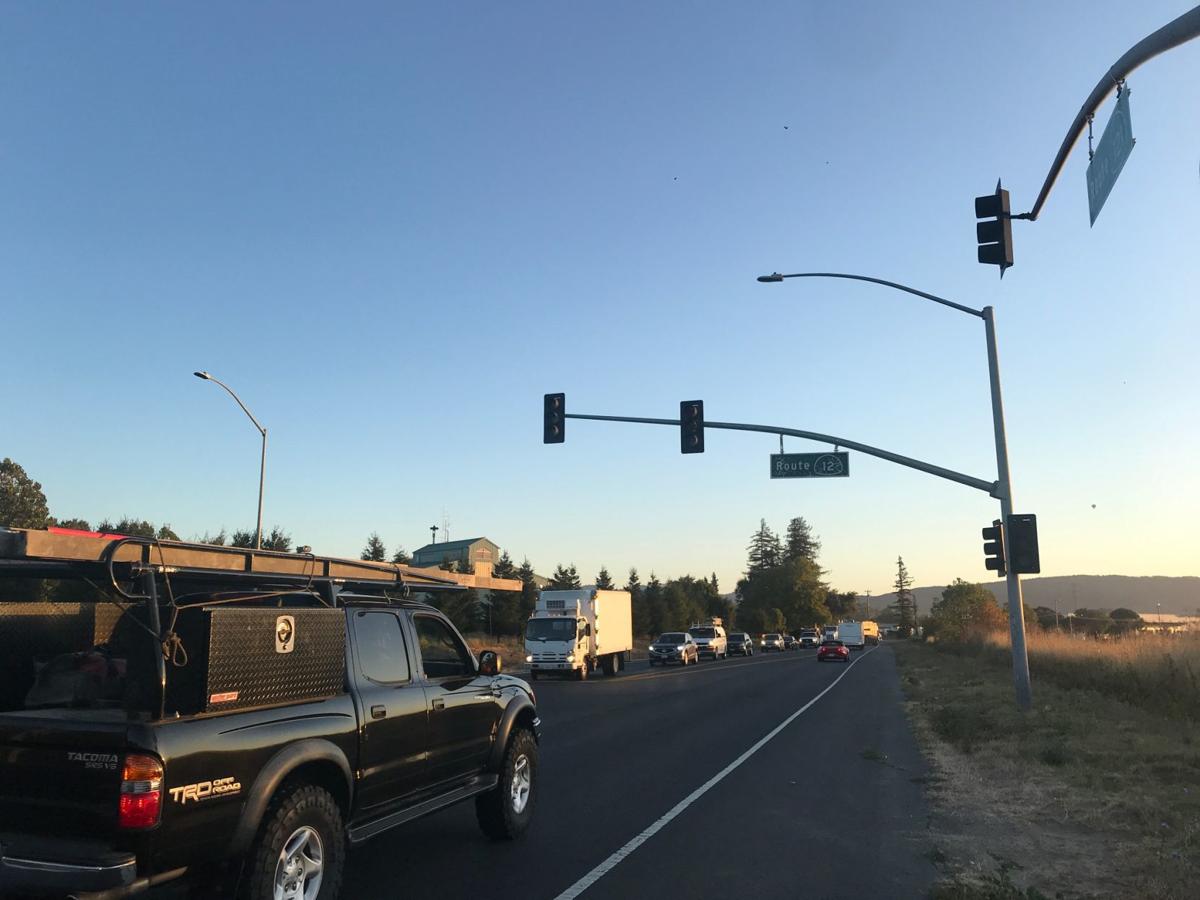 Motorists coming into Napa County Wednesday morning encountered traffic signals that weren't working due to the public safety power shutdown. This photo show a dead signal and backup at the intersection of Highways 12 and 121 at Schellville in Sonoma County. 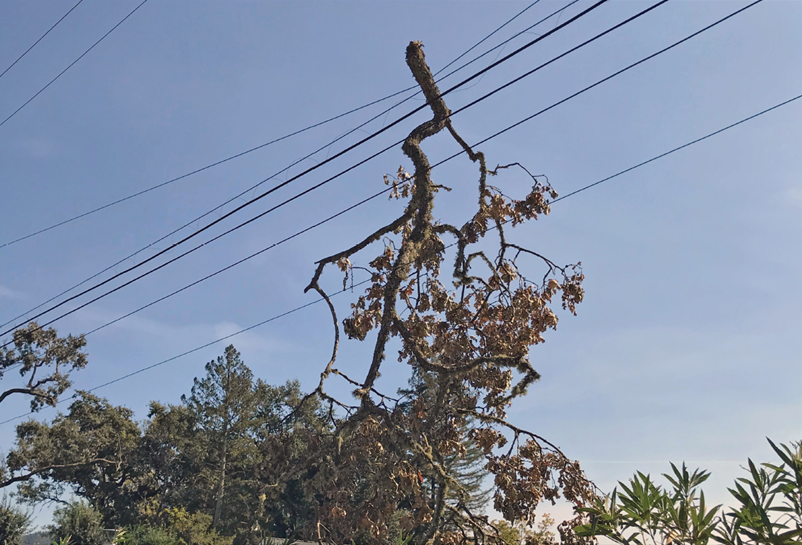 PG&E released this photo of a tree limb that fell into a power line in Napa County during the public safety power shutoff that began Oct. 9. With the predicted return of high winds this week, PG&E is cutting power again starting Wednesday, Oct 23.

Motorists coming into Napa County Wednesday morning encountered traffic signals that weren't working due to the public safety power shutdown. This photo show a dead signal and backup at the intersection of Highways 12 and 121 at Schellville in Sonoma County.

PG&E released this photo of a tree limb that fell into a power line in Napa County during the public safety power shutoff that began Oct. 9. With the predicted return of high winds this week, PG&E is cutting power again starting Wednesday, Oct 23.

“We know we must do better and we are committed to doing just that,” spokesperson Deanna Contreras said in an email. “We recognize that a (shutoff) can create real hardship for people, but given the choice between hardship and safety, we will always choose safety.“

Local officials have plenty of suggestions for the utility.

“We’ve got to keep the heat on PG&E to do better, “ Napa County Risk and Emergency Services Manager Kerry John Whitney told the county Board of Supervisors on Tuesday.

The shutoffs late last week were designed to prevent falling power lines from sparking wildfire amid windy, dry weather. They affected 738,000 customers in 35 counties for 40 hours and longer, including 32,500 customers in Napa County, officials said.

“I don’t think I could rate them any better than an ‘F’,” Dodd said Monday. “I think it was a complete failure on their part.”

Not every local official was quite so stinging, but several told the Napa Valley Register that PG&E should make changes.

Napa Mayor Jill Techel said she lost power at her home for about 50 hours. The shutoff began after midnight Oct. 9 and winds didn’t pick up until that evening.

“Twenty-four hours, you can kind of camp and figure it out,” Techel said. “When it was going on for over 50 hours, you knew you were losing stuff in your freezer.”

The city would like to see PG&E’s forecasts and what the utility based the outages on, Techel said.

So would Napa County. Whitney said the ability for the utility to home in on the timing of strong winds is important.

“We’re at the mercy of PG&E to make that decision,” Whitney said. “I’ve not heard yet how PG&E is explaining that.”

Dodd said the areas that lost power should have been much smaller.

“These public safety power shutoffs are designed to be only done in high-risk areas,” Dodd said. “It’s impossible for me to believe that all the power shutoffs they had in 30 counties were of significant risk.”

Residents in his district would be cooperative with power shutoffs if they felt the shutoffs were actually protecting human life and property, Dodd said.

“It’s when you have power shutoffs and there are no wind events, they lose confidence not only in their utility, but their government,” Dodd said.

Contreras said in the email that the timing of the de-energization sequence has to ensure the continued stability of the grid.

“The nature of the system is large and complex,” she said. “When we de-energize, we have to work closely with the California Independent System Operator (Cal ISO) to make sure we are not compromising the stability of the power flow because we are all interconnected on the Western grid, including other energy companies along the Coast.”

Both Techel and Whitney said that the maps PG&E released of areas targeted for shutoffs proved inaccurate. Techel said her city braced to put out stop signs at 40 signalized intersections that looked like they would be without power.

As it turned out, the city received a happy surprise.

“We were ready to go,” Techel said. “Within the city limits, there weren’t anywhere near that many lights out.”

Whitney said the maps released by PG&E prior to the shutoffs had a 20-percent buffer around the areas where outages would be. Someone looking at the maps would see a 20-percent increase in the amount of the actual outage areas.

The PG&E maps showed the downtown jail would lose electricity, which would have required transferring inmates to other locations. The county was able to use its mapping systems to eliminate the buffers and reveal the jail would retain power, which it did, Whitney said.

“That’s not information we were able to get from PG&E,” Whitney said.

“PG&E stepped up and provided generators on a pretty quick basis ... so St. Helena continued to receive water,” he said.

County Supervisor Alfredo Pedroza on Tuesday asked that the Board of Supervisors discuss the public safety power shutoff at a future meeting. He wants PG&E officials to attend and answer questions.

Pedroza said local officials are receiving questions from residents, such as why the outage started so far in advance of the strong winds. He and others don’t have the answers because PG&E hasn’t told them.

“I believe in prevention,” he said. “I believe in (public safety outages) because we know what happens when disaster strikes our community. But it doesn’t mean we accept what happened. There were a lot of local impacts to residents, to kids, to business that I don’t think PG&E fully understands.”

Whitney suggested teaming up with other counties to make PG&E hear their collective voice.

PG&E is taking heat outside of Napa County as well. Gov. Gavin Newsom in a press release urged the utility to give each residential customer who lost power a $100 credit or rebate.

California Public Utilities Commission President Marybel Batjer in a letter in listed such problems as the PG&E website crashing when it was supposed to be providing real-time information to customers. PG&E’s failures created “an unacceptable situation that should never be repeated,” Batjer wrote.

“It can’t be a matter of routine,” Whitney told the Board of Supervisors on Tuesday. “It can’t be our new world, what we need to expect from PG&E.”

All of Napa County has power, PG&E says

Power has been restored to all Napa Valley residents who lost it last week, according to the Pacific Gas and Electric Company.