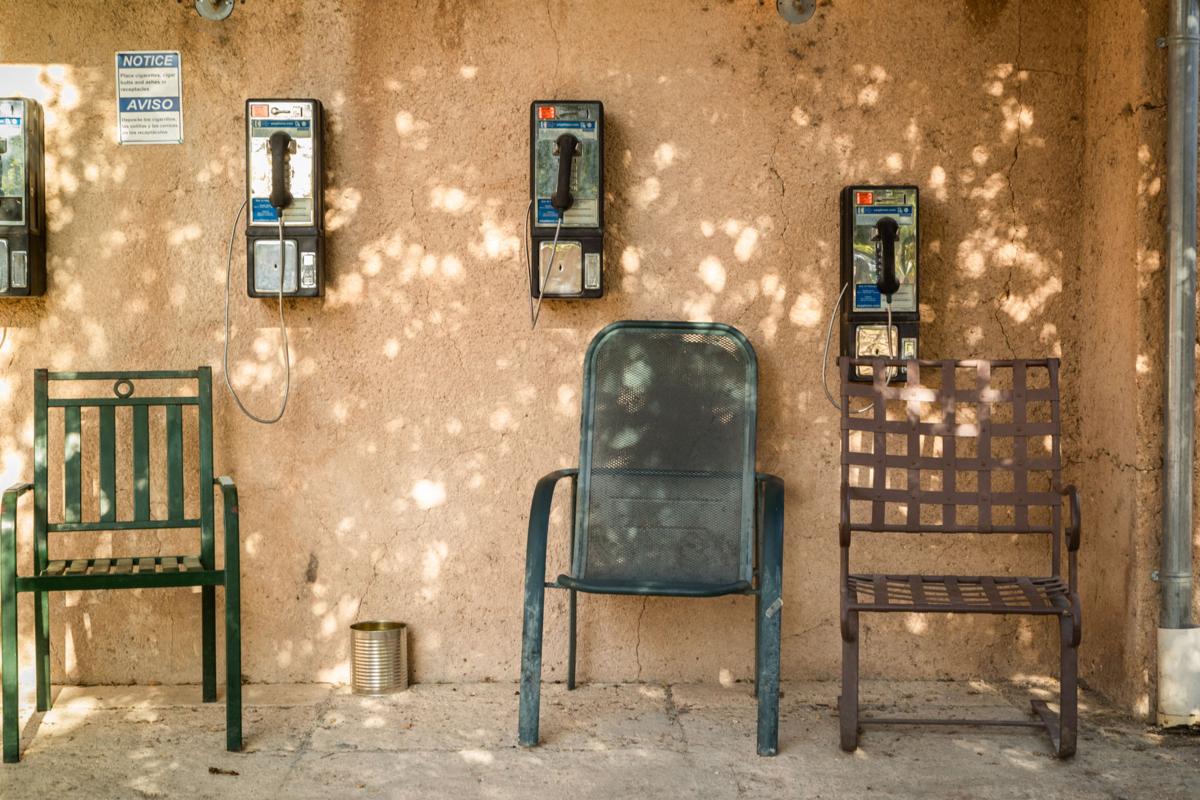 Payphones for use by residents of the River Ranch Farmworker Center in St. Helena. Some center residents were quarantined twice for week- or weeks-long spans over the summer of 2020, provoking feelings of anxiety and isolation. 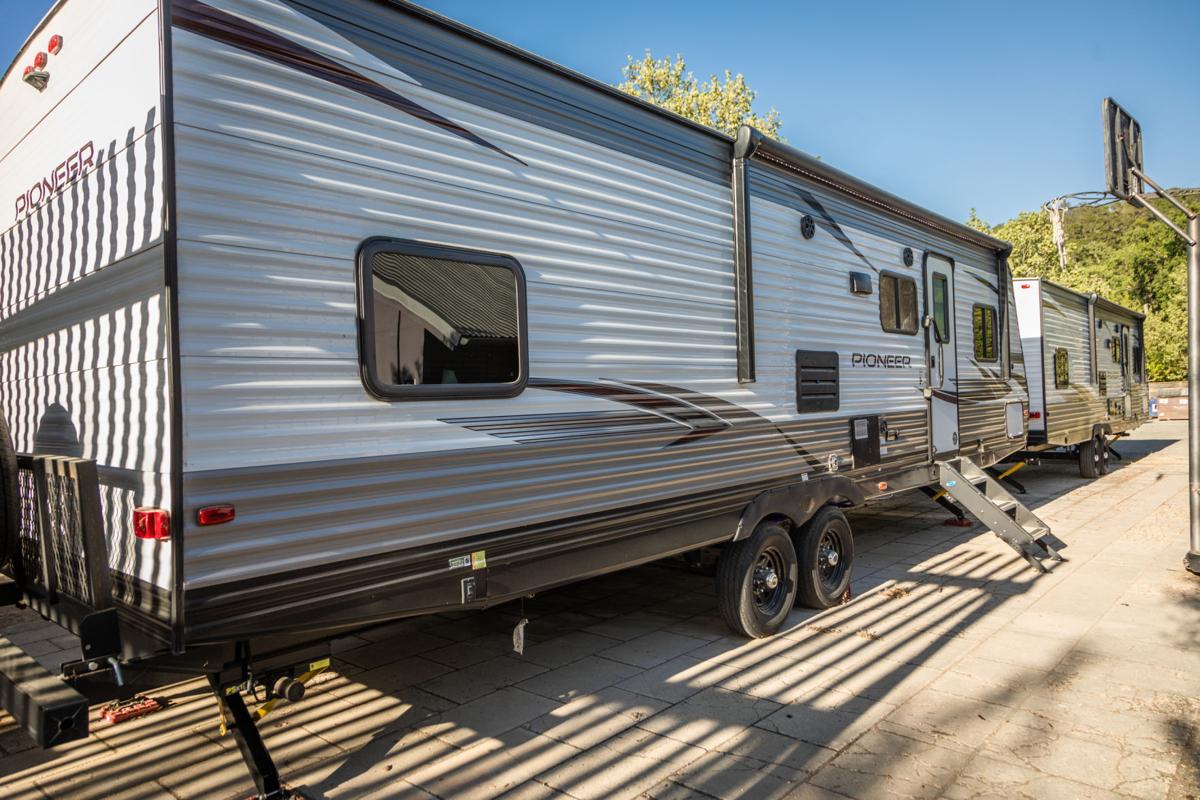 River Ranch residents who tested positive for COVID-19 were given the option of quarantining inside these trailers on the center's grounds. The vast majority of workers who contracted the virus stayed inside motel rooms, Napa County officials said.

The outbreaks at River Ranch Farmworker Center began in the summer of 2020. Amid the stress and uncertainty the pandemic had already inflicted on the residents of the county-owned facilities, the center was forced into a kind of lockdown, and each of its almost 60 residents were put into quarantine.

Every single resident was quarantined for at least seven days, county officials confirmed. After that, the men were retested, and those who tested negative were released. In line with guidance from the Centers for Disease Control and Prevention (CDC), residents who tested positive were quarantined for 14 days.

Each of the three county-owned farmworker housing centers suffered a mass outbreak of the coronavirus, likely because residents there live in “efficiency units,” with two to a room, according to Napa County Staff Services Manager Jen Palmer, who headed the isolation and quarantine sheltering branch of the county’s Emergency Operations Center.

Congregate facilities like the farmworker centers became hot spots for the virus across Napa County. Outbreaks among farmworkers, living in tight quarters both in and out of the centers, fueled high coronavirus case rates across the three counties in the North Bay.

There were two large outbreaks of COVID-19 at River Ranch. Some residents, including Salvador Barajas, who has lived at the center for six years, underwent multiple weeks-long or week-long quarantines. Residents were transported from the county-owned facilities into motels, where they remained for their prescribed quarantines.

“When you’re locked up like that, you feel as if they’re treating you like … well, like you’re mentally ill,” Barajas, 45, said. “It’s a kind of depression. We’re people who are used to the outdoors, working and moving. (In quarantine), that’s taken away from you.”

Quarantine periods imposed to stop the spread of COVID-19 have had an adverse effect on the mental health of “the general global population,” researchers wrote in a study published in the journal Frontiers in Psychiatry in June 2020.

The true impact on isolation stemming from the pandemic is not yet fully known, but “frustration, loneliness, and worries about the future” appeared common reactions to quarantine periods, researchers concluded. Those responses “represent well-known risk factors” for a range of conditions including anxiety and post-traumatic stress disorders, according to the study.

Many of the farmworkers who underwent long quarantines described those very feelings – frustration and worries about the future most common among them. Many suffered financial losses, compounding their anxiety over the future, according to Jose Segura, 55, a River Ranch resident who contracted COVID-19 and underwent a month's worth of quarantining total.

“The whole time you’re thinking of your family – I’m in here, and I can’t leave because I’m respecting the rules of the county. You’re thinking, at the end of the month, (how will we pay our bills)?” he said.  “It was frustrating. It’s something that stays with a person — I had never spent a month that way.”

Voices from the Vineyard: the Glass Fire was an "ugly" time, workers say. Facing financial pressure from the pandemic and smoke, they felt obligated to work when they could, conditions aside.

The whole year has been a stressful and uncertain time for farmworkers, some of whom are grappling with the impacts of a lowered overtime threshold as mandated by Assembly Bill (AB) 1066; some employers have subsequently lowered the weekly hours farmworkers are able to clock, lowering their monthly income.

County officials knew quarantines were “not without impact” on farmworker center residents, according to Palmer, adding that the first outbreaks were in the weeks leading up to harvest, which are “peak times” for earning extra income for farmworkers. The Napa Valley Community Foundation provided some wage replacement to residents to help mitigate that impact, she said.

Stigma often prevents individuals from seeking help even when their mental health needs are most pressing, community members and experts say. One study published in the online journal Rand Health Quarterly in 2017 found that although stigma among Spanish-speaking Latinos – a group that includes many if not most of the River Ranch residents - was in some contexts lower than among whites, the former group was “the least likely to have used mental health services of all the racial/ethnic groups included in the study.” Latinos surveyed in English reported higher levels of self-stigma, according to the study.

Voices from the Vineyard: About two-thirds of Napa Valley employers offer health insurance to full time farmworkers, according to one poll. But workers do not always enroll, citing unaffordable premiums.

“The picture is complex for Latinos surveyed in Spanish, who simultaneously had greater levels of stigma in certain domains (e.g. beliefs that people with mental illness are never going to contribute to society) and lower levels in others (e.g. concealment of a mental health problem from coworkers/classmates,” the study reads. “Asian-Americans and Latinos who completed the survey in Spanish (versus in English) were the least likely to acknowledge having a mental health problem and had disconcertingly low levels of mental health service use, even among those with serious levels of distress.”

As in the case of other kinds of health care, the cost can often be another obstacle for farmworkers and other low-wage workers struggling with their mental health. Lack of insurance, especially, could have pronounced implications for access to mental health services among low-wage earners like farmworkers, experts have said.

The Napa Valley community and the country at large could be dealing with the consequences of the pandemic and subsequent shutdowns for years to come, according to Adriana Navarro, a bilingual supervising mental health counselor for Napa County who primarily works with children. To date, there has not been an observable influx of demand for mental health services – not among children, who are often referred to these services by their teachers, nor among adult residents generally, she told Voz Del Valle Host Nico de Luna on an episode of the Spanish language radio show sponsored by the Register.

“It’s interesting because there are many people that haven’t taken advantage (of county mental health services),” she told De Luna in Spanish in April. “Many people completely isolated themselves, and in their isolation, they alone bore the weight of their suffering and fear.”

Depression has been one of the most common diagnoses during the pandemic, Navarro said during the interview. Sometimes people who are clinically depressed dismiss their symptoms as "normal," she added, which prevents them from receiving treatment.

“Feelings of sadness – anxiety, fear – those feelings that we all have, and which help us to survive .... They’re valid feelings, and it’s normal to feel sad sometimes,” Navarro said in Spanish. “But with depression … we’re speaking here of clinical depression, that impacts your ability to function and to keep moving forward in life.”

Voices from the Vineyard: 2020 harvest, cut short by North Bay wildfires, 'devastating' for wellbeing of farmworkers

Farmworkers in Napa and Sonoma counties suffered great hardships in 2020 as a result of the coronavirus pandemic and the wildfires.

Depression might impact eating or sleeping habits, she explained, or prompt loss of interest in activities that once might have brought you joy. The clearest symptom of depression is thoughts of suicide, she added. Napa County, which partners with a variety of nonprofit agencies in the area to offer mental health services, offers mental health assessments by phone Monday through Friday from 8 a.m. to 5 p.m for patients with and without insurance and with MediCal, Navarro said.

“To ask for help does not mean you are crazy. I always say that the brain is the most important organ in your entire body because if your mind is not right, nothing in your body will be, either,” she told De Luna. Taking care of one’s mental health is just as important as taking care of a physical ailment, she added.

“So why not check on the most important organ?” she said. “Without our minds, we are nothing.”

Register reporter Sarah Klearman reported this story with support from the Impact Fund, a program of the USC Annenberg Center for Health Journalism.

Heat alerts in effect for parts of the South and Northwest

I’m ‘Just a Kid’: why all of Napa’s students deserve affordable, inclusive, creative outlets for stress

Letters: We should be creating spaces that allow all people the opportunity to find their rhythm and leave them dancing in life.

The Waste of the World: Napa Valley must prioritize the health and personhood of its unhoused

Letters: Homelessness is a sign of a failed economy.

Payphones for use by residents of the River Ranch Farmworker Center in St. Helena. Some center residents were quarantined twice for week- or weeks-long spans over the summer of 2020, provoking feelings of anxiety and isolation.

River Ranch residents who tested positive for COVID-19 were given the option of quarantining inside these trailers on the center's grounds. The vast majority of workers who contracted the virus stayed inside motel rooms, Napa County officials said.