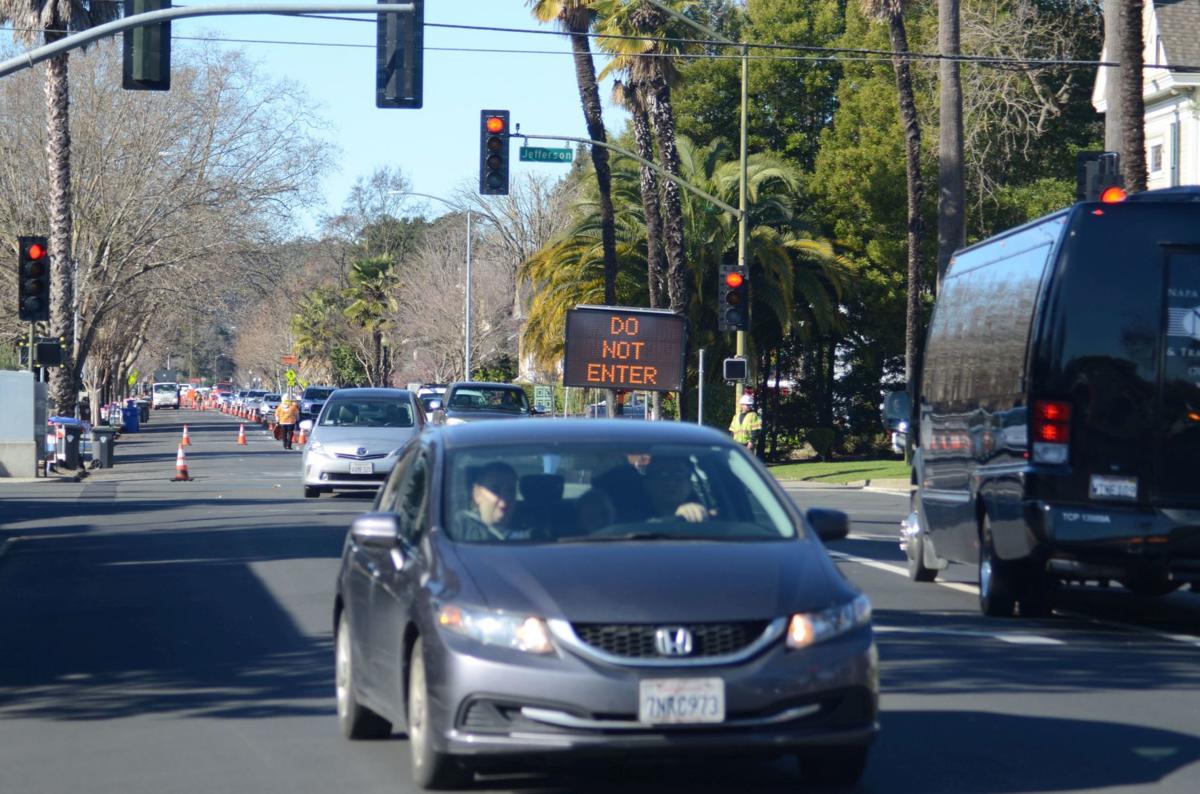 Traffic flowed eastbound on First Street for the first time in over 50 years on Friday morning. One lane was blocked so new markings and signs could be installed. 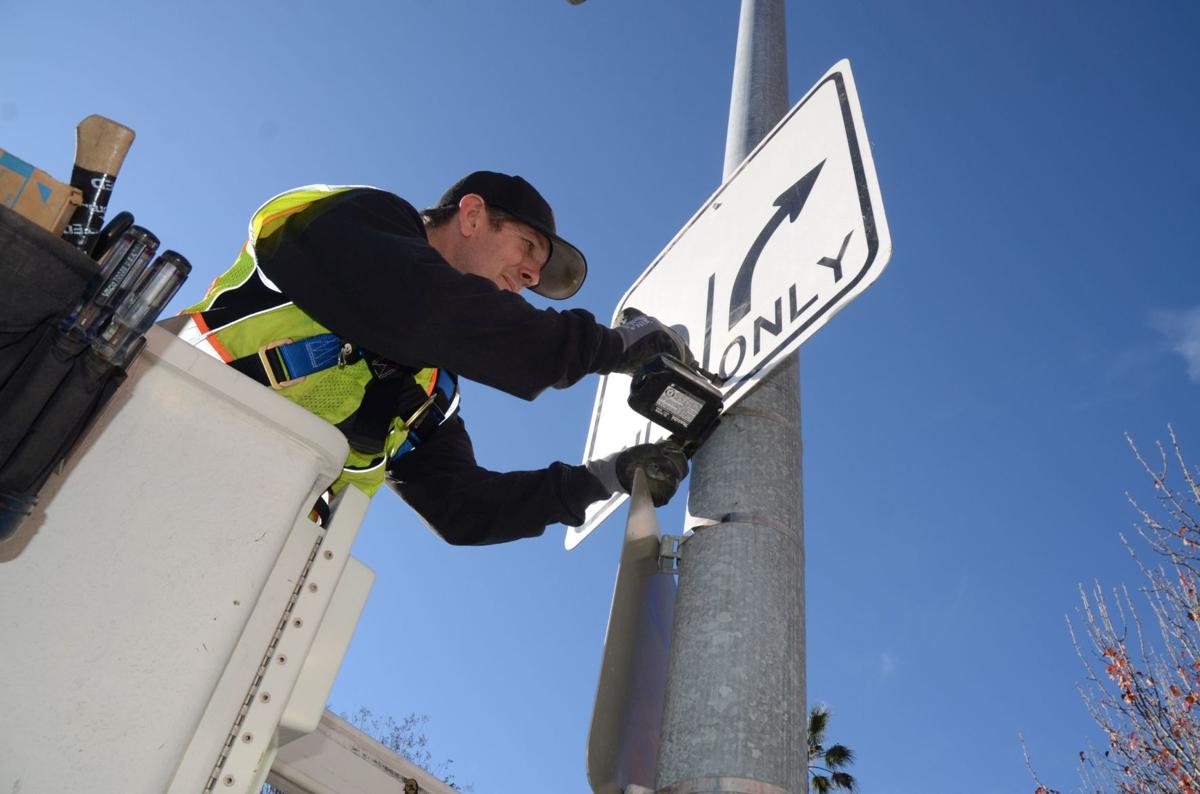 City employee Michael Hassell installs a sign explaining the new traffic pattern at the intersection of Jefferson and First Street. 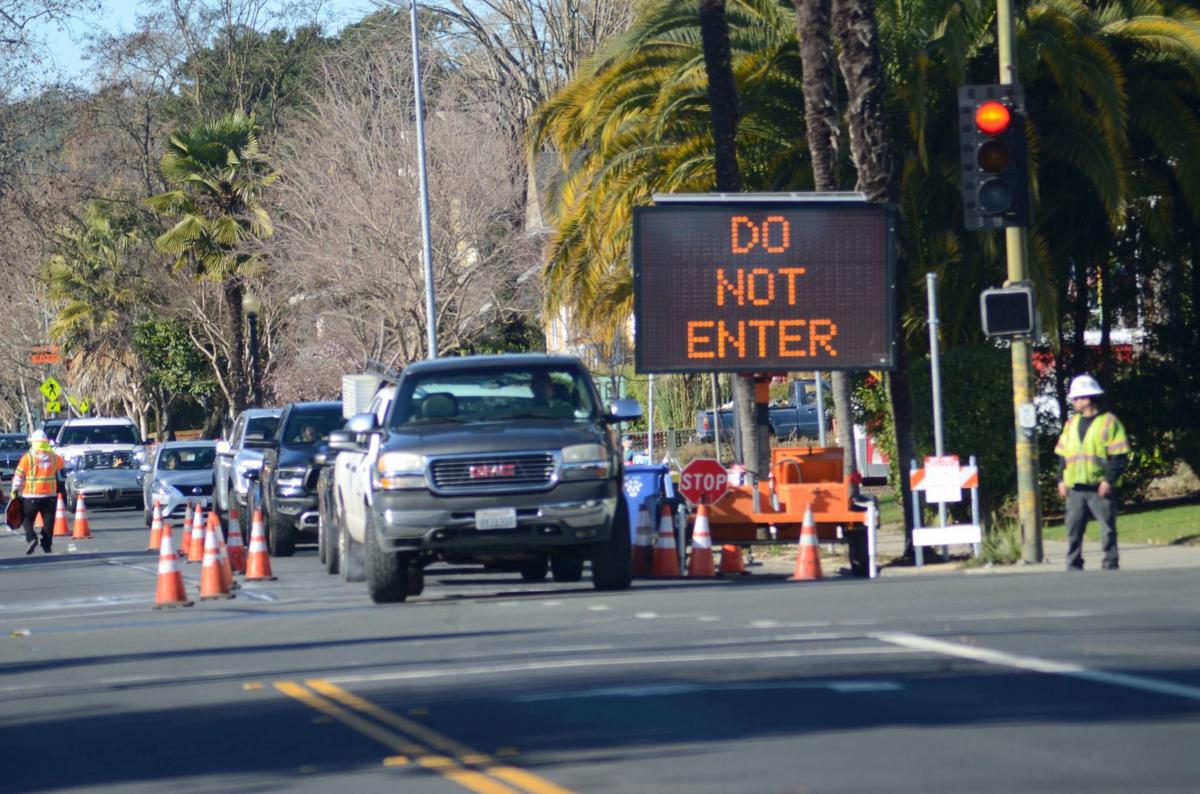 Traffic flowed eastbound on First Street for the first time on Friday morning.

In one big cosmic flip, westbound First Street near the freeway became eastbound, Second Street changed in the opposite direction and the new roundabout at First and California Boulevard opened.

Napa is well on its way to becoming the only city in California with three tightly clustered roundabouts — an innovative design intended to reduce congestion at the Highway 29 overpass that connects downtown to west Napa. Before construction started, 15,000 vehicles passed through daily.

Got an opinion about the latest Napa traffic changes?

During the countdown to the street flip and roundabout opening, opinions of those living and working in the neighborhood varied.

Daisy Vega, who lives on First Street, called the flip of First a good thing. Motorists unfamiliar with Napa were forever going the wrong way on First. “You hear a lot of honking,” she said.

Jamie Cherry, a co-owner of The Inn on First, said he was originally opposed to the flip, thinking, “Oh, what a nightmare.”

He’s since changed his opinion. People headed downtown should arrive on First, a street that shows off what Napa has to offer, he said.

Cherry hopes the flip will slow traffic down. Too many motorists leaving downtown tend to put the pedal to the metal, he said.

Shawn James, who was working at a residence on First, was skeptical of all the changes. “They’re doing this for the tourists,” he said.

The first of the roundabouts opened in November on First at the freeway on- and off-ramps, giving many Napa drivers their first experience in negotiating this newly popular intersection design, said Eric Whan, the city’s deputy public works director.

“It’s going to look confusing, but take the same approach as driving the first one. Slow down, follow the signage and pavement markings. And yield as appropriate,” Whan said.

“That the beauty of the roundabout,” he said. “They look scary, but they’re really simple.”

The city and Caltrans are partners on the roundabout project, with general contractor O.C. Jones & Sons of Berkeley winning the $11.4 million construction contract.

Construction started in July and should wrap up by March, which is about nine months earlier than the original projection, Whan said.

Yet to be completed is the Second Street roundabout, the rebuilding of the connection to California Boulevard south of Second, the laying of a top coat of asphalt and the landscaping, he said.

Changing the one-way direction of First and Second between Jefferson Street and California completes the implementation of a traffic design for downtown approved years ago by the City Council.

In November, 2014, major one-way streets in the central business district were converted to two-way, undoing a one-way traffic pattern established in the 1960s when congestion was considered to be a major issue.

Get ready for First and Second streets to flip direction between Jefferson and the freeway on Friday.

3 Napa roundabouts taking shape as motorists weave through the project

The torn-up intersection at First Street and Highway 29 is being remade for not one, but three roundabouts.

Motorists voice withering criticism -- and some praise -- of the new First Street roundabout.

Napa stoplights gain another kind of glow – from reflectors

Traffic flowed eastbound on First Street for the first time in over 50 years on Friday morning. One lane was blocked so new markings and signs could be installed.

City employee Michael Hassell installs a sign explaining the new traffic pattern at the intersection of Jefferson and First Street.

Traffic flowed eastbound on First Street for the first time on Friday morning.