There was not a single visitor at Schramsberg Vineyards.

No one gazed over the legions of sun-warmed vineyards or into the thick wilderness that surrounds the storied property, which had bloated with green in the late-season rain. The faint chorus of clinking glass floating through the grounds as employees manned the bottling line went unheard; the team at work inside one of the winery’s historic caves went unseen, even as they engineered stacks of wine bottles so tall they reached the lace-like cob webs on dangling from the ceiling.

It all seemed a shame to Geoffrey Curley. And as it so happened, he was in a position to do something about it.

Curley’s background is in theatrical design; today, though, he’s in the business of “creating experiences”. A decade ago, he founded his own company – Geoffrey M. Curley and Associates – and set to work creating interactive exhibits often punctuated by 360-degree virtual experiences. The business’s portfolio is wide ranging: Curley has worked with cruise lines, museums, even film studios.

One of the group’s last projects, called The Great Fermentation, was wine-centric; it aired in Chicago this past winter and featured a 360-degree virtual tour of a vineyard in Tuscany.

The Great Fermentation was a project of Curley’s, something he’d dreamt up after mulling over the “barrier to entry” into wine that exists for consumers. More than 14,000 people came through the Chicago-based experience, engaged with the virtual reality experience Curley and his team had put together and participated in wine tastings.

Most of those guests were already interested in wine, according to Curley, but often said they weren’t “wine people” – that their tastes weren’t sophisticated, that they didn’t understand much about the product.

“The more we dug into that, the more we understood that wasn’t true: it was, you are a wine person, you understand the wines and flavors you like. It’s just that you don’t know how to apply that to find more wines that you like,” Curley said. “If you feel insecure about that, you’re probably not going to go to a vineyard (to taste wine). So we wanted to create a different entry point.”

As travel came to a standstill and tasting rooms closed their doors, Curley wondered if the technology might be of use to the broader American wine industry.

“We looked around to see if other wineries had been (working with 360-degree technology), and we didn’t find much out there,” he said.

Curley’s search revealed most wineries had extensive photo, and even video, content on their websites – but nothing quite like what he and his team knew they could compile. So began his latest project, dubbed Vineyards to Home.

He began trying to get in touch with boutique wineries across California, hoping to donate tours to small, family-owned wineries producing less than 5,000 cases per year. The team connected with Schramsberg before deciding they’d work principally with smaller producers, according to Director of Community Outreach and Development Gina McLeod, and decided to keep their word. (Wineries can reach out to Curley via his website.)

“There had been some discussion internally a while ago about having this kind of virtual tour, where you could see the path of a visit,” Schramsberg President Hugh Davies said. “Maybe not surprisingly in this particular moment of a more virtual reality, when they contacted us, we kind of jumped at it.”

Curley arrived at Schramsberg early in the morning on a Friday in mid-May, a Nikon DSLR slung over his shoulder and a slim tripod in hand. Screwed to the top was a slim black device, smaller and thinner than a cellphone. It had come with him from San Diego, where he’d been staying through the state’s shelter-in-place, up through his filming at wineries in Santa Barbara, the Russian River and in Alexander Valley.

Just a few days earlier, Curley had used it to capture the view from Dos Lagos Vineyards on Atlas Peak. All of the wineries Curley has so far worked with – apart from Schramsberg, that is – are boutique producers. Some, like Dos Lagos, make as few as 800 cases each year.

“It sounds pretty fascinating, the idea of virtual tours,” Dos Lagos Owner Tom Dinkel said, noting that many of the winery’s club members, cooped up in their homes, have expressed a desire to return to the valley once life normalizes. A virtual tour, Dinkel said, could help transport not just existing club members, but perhaps catch the eye of newcomers online.

Boutique wineries have been hit especially hard by the pandemic’s impact on tourism. Tasting rooms account on average of 28% of sales for small wineries; they also serve as conduits for wine club membership, which on average accounts for an additional 23% of sales. Wineries producing between 1,000 and 5,000 cases could lose as much as 48% of their revenue for the year, according to one estimate.

“Once people try the wine, it speaks for itself,” Dos Lagos’ Dinkel said. “But so many people don’t know who we are. So if someone’s searching for ‘Napa wines’ and they find our virtual experience and like what they see – we’re hoping for that kind of exposure.”

“Our most effective marketing tool for sure is a visit to the winery, no doubt about that,” Davies said. “I think (attracting customers cold) is harder.”

But he’s continued to explore ways to do so. The winery plans to link the tour on its social media platforms as well as on its website, according to Marketing and E-Commerce Manager Matt Levy, in the hopes that it will reach as many consumers as possible.

“Everybody is making really good wine in Napa Valley,” Levy said. “What sets you apart is your story.”

Schramsberg has been leaning heavier it usually does on social media to reach its consumer base, Levy said. It now regularly streams virtual tastings on Facebook and broadcasts live to its followers on Instagram. (“We haven’t figured out how to sell wine through Instagram yet, though,” Davies joked.)

Virtual tastings, as popular as they’ve become, bring only the wine to the consumer – not necessarily the experience tied to the wine. The virtual tour could fill that void, Davies said.

“In a unique way, this may attract people,” he added. “But we know nothing we are going to be able to do is going to attract everyone the same way.”

Filming at Schramsberg lasted six hours. Curley’s device and its wide, all-seeing lenses witnessed what no visitor could. There were racks of 2019 blanc de noir, a pinkish hue illuminating cave walls, stacked as tall as a one story building; the bottling line, an endless stream of clear glass pushed along by employees; the way the American flag attached to the restored, 19th-century Victorian home on the property flapped in the wind.

He worked quickly and moved easily – a testament to how much 360-degree video technology has improved over the last decade. Footage would soon be sent in for editing, and then polished and sent to the team at Schramsberg. Within a few weeks, the scenes that Curley alone had borne witness to would be up for the world to see.

“We’re taking that physical interaction out of these experiences, but still trying to tell those stories, generating that emotional response to the people who are creating the wines,” Curley said. “The work that (vintners) do, their families, the landscape – that’s in every bottle as much as the wine itself.”

Rutherford's Honig adapts wine tastings in the era of COVID-19

A wine tasting at Honig Vineyard & Winery feels quite different from a pre-COVID-19 tasting. (Don't forget your face covering.) 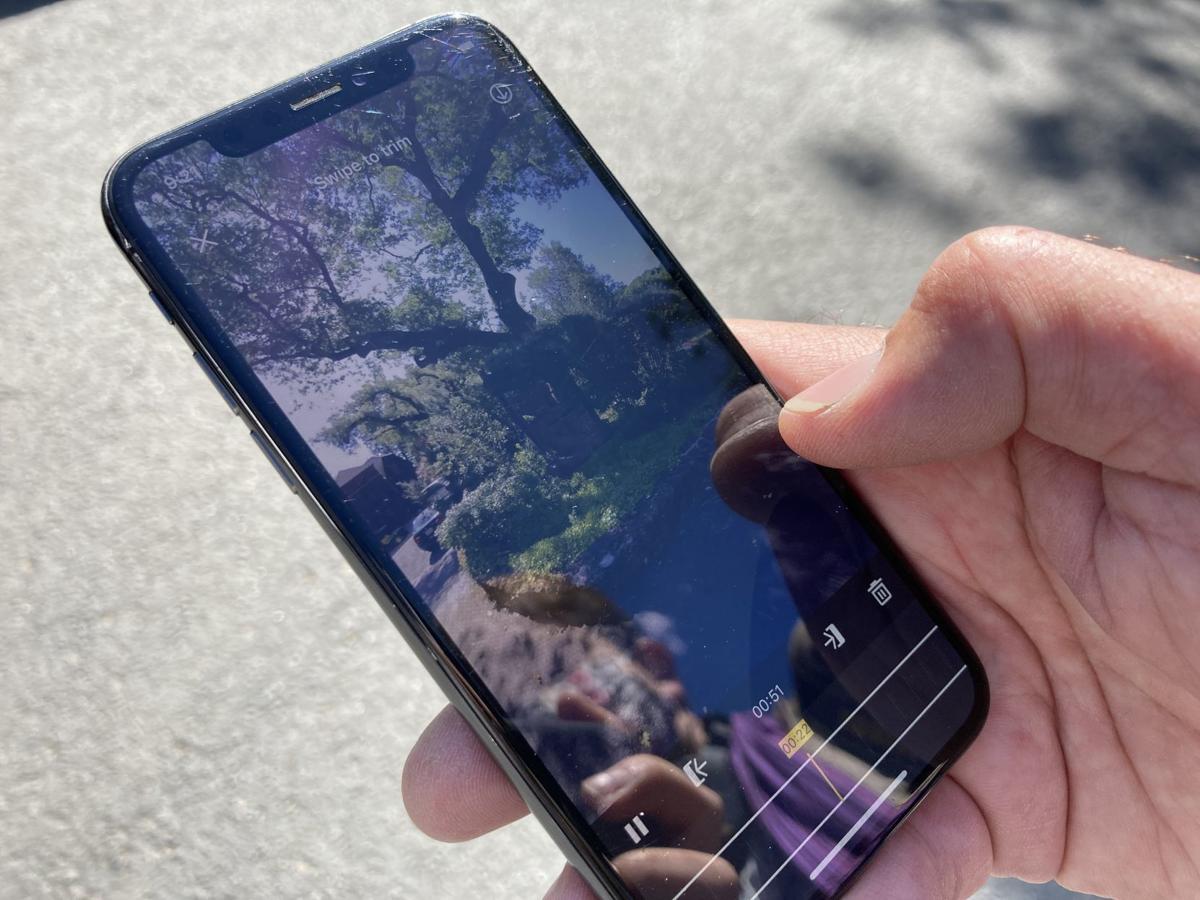 Geoffrey Curley eyes a 360 degree view in front of the historic barn at Schramsberg Vineyards. Curley uses an app on his phone to adjust his filming. 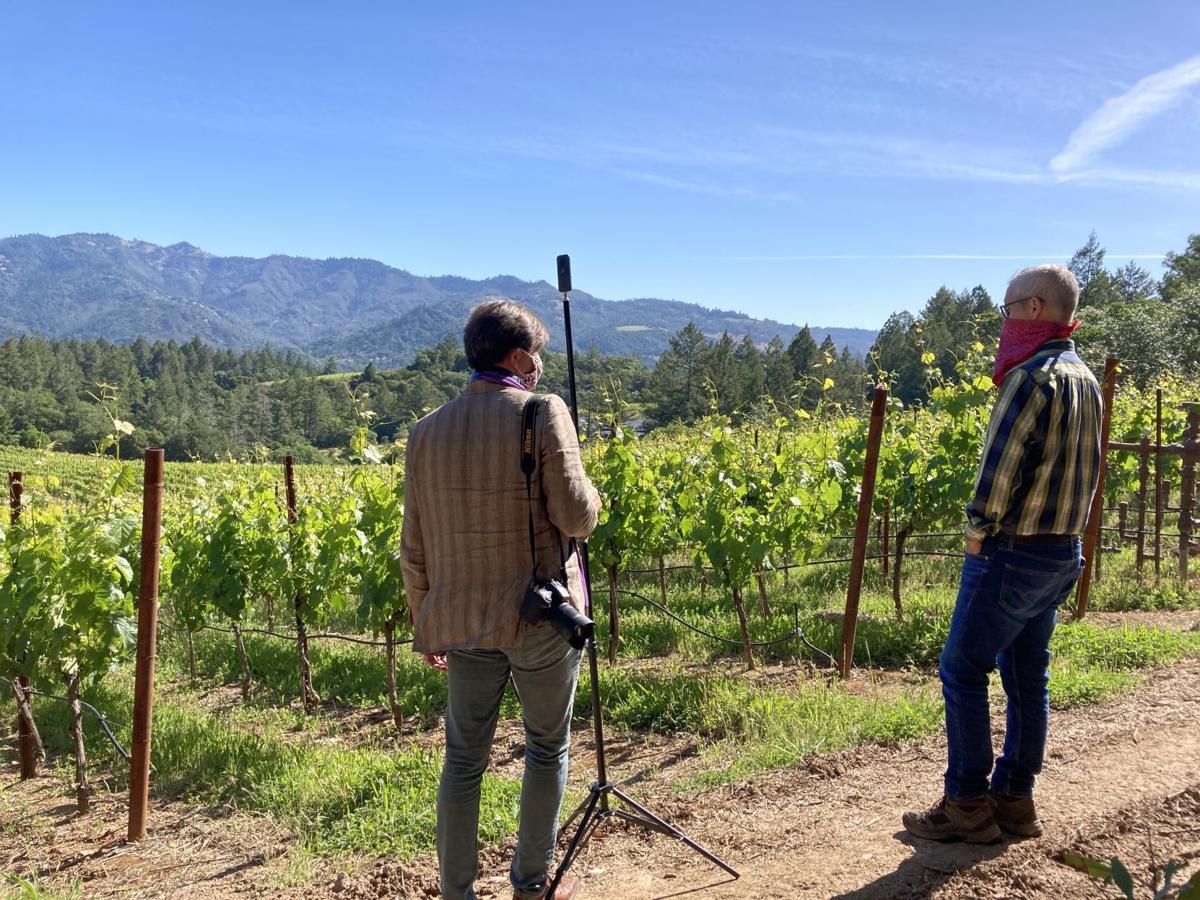 Geoffrey Curley, left, plans a shot of McEacharn Vineyard at Schramsberg Vineyards with President Hugh Davies, right, as part of the 360 degree virtual tour Curley is putting together for the winery. 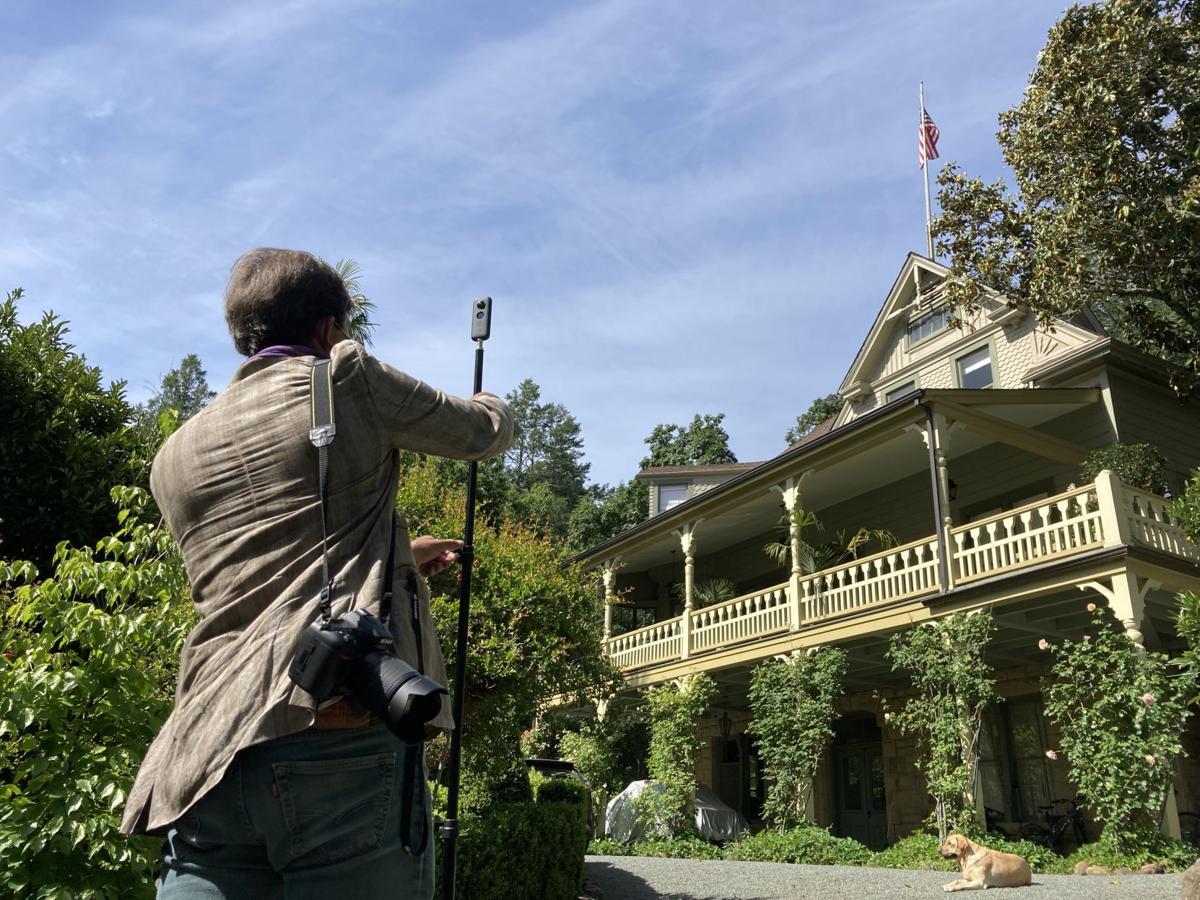 Geoffrey Curley positions his tripod in front of the historic 19th century Victorian home on the grounds of Schramsberg Vineyards. 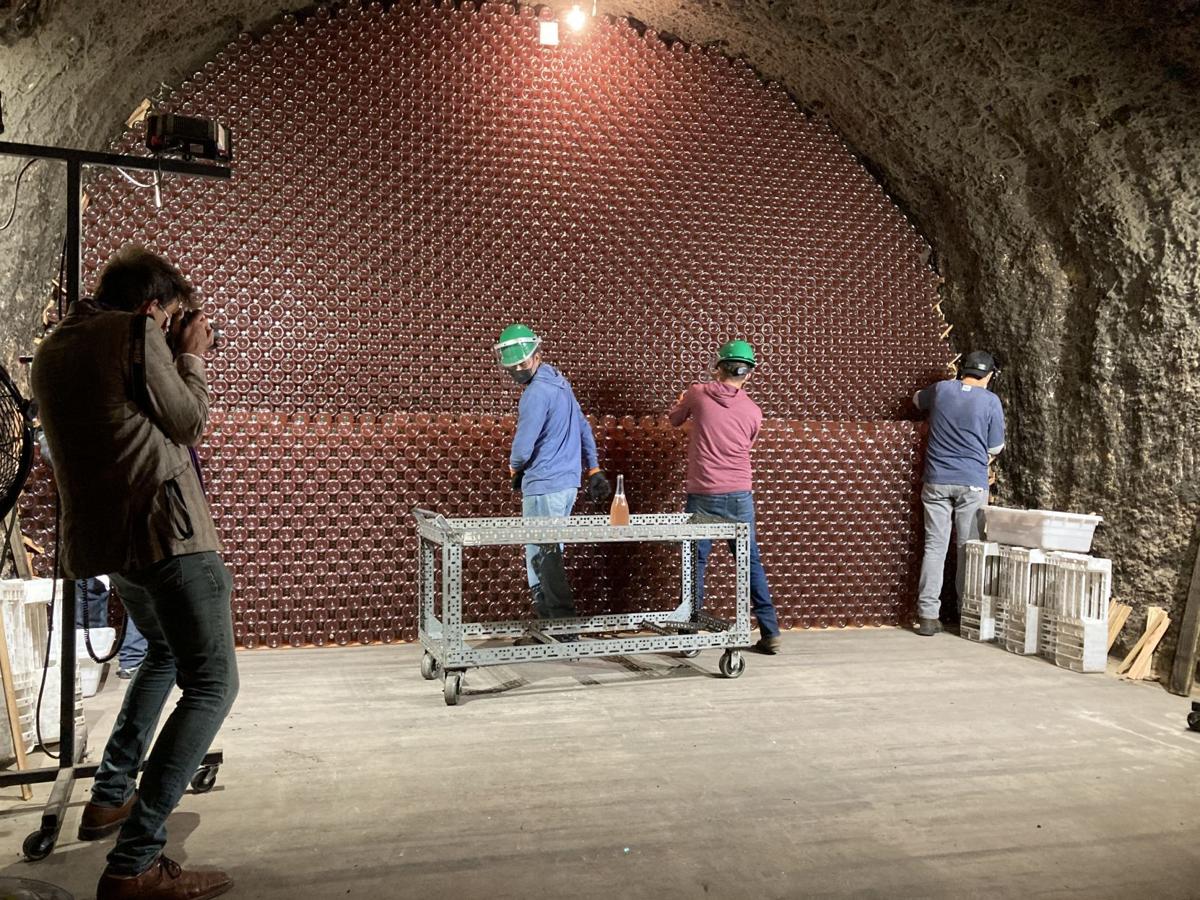 Geoffrey Curley hunches to shoot men stacking wine bottles up into the walls of the historic wine caves at Schramsberg Vineyards.