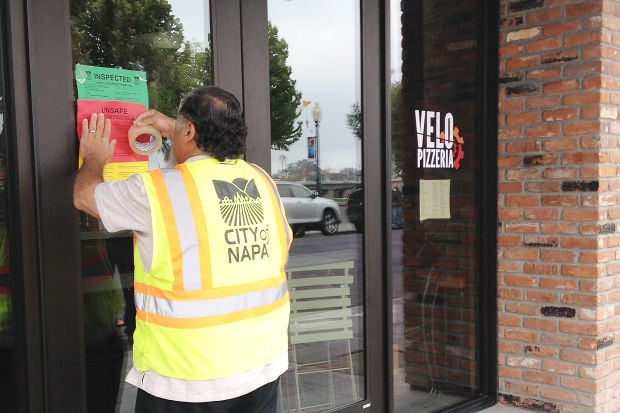 Napa's Chief Buidling Official Dan Kavarian tapes a red tag Thursday morning  to the door of the recently opened Velo Pizzeria on Main Street. Though the restaurant was recently seismically retrofitted, it abuts a masonry building on Brown Street that poses a safety threat to adjacent structures, according to the city. The Brown Street building, which has also been red-tagged, is owned by Brian Silver, a Napa attorney.

who has historically refused to bring his buildings up to earthquake codes. 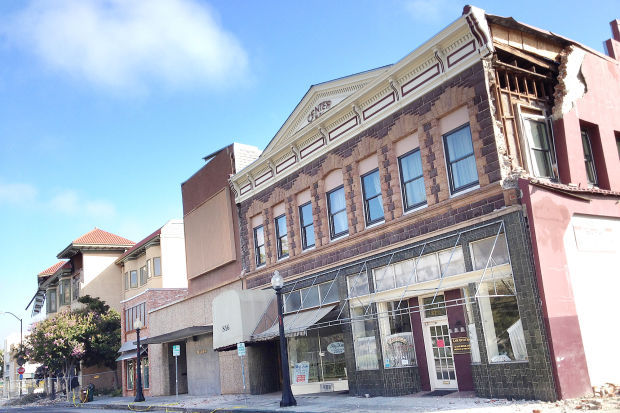 Two buildings owned by Brian Silver on Brown Street, opposite the Historic Courthouse, sustained earthquake damage. Because they present a danger to surrounding properties, the city has now red-tagged seven surrounding businesses. 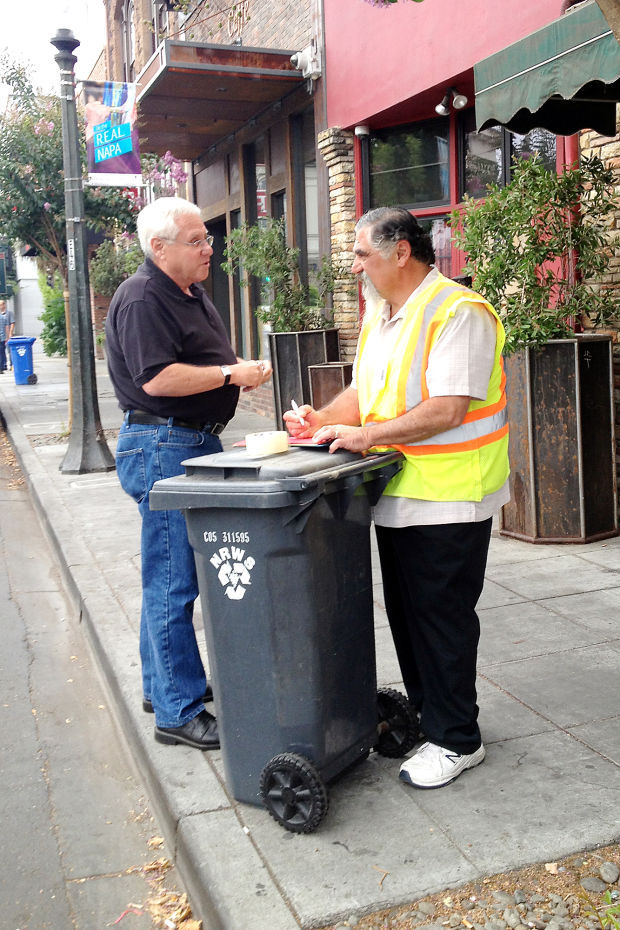 “We have to tag these other buildings because of the immediate danger from the adjacent unreinforced building,” he said, referring to Silver’s law offices, which were required to be earthquake proofed in 2009, but never were.

For a time, one of the red-tagged buildings was The Thomas at Fagiani’s, but the city later withdrew the occupancy ban, deciding that the structure was too tall to be harmed if one of Silver’s buildings collapsed.

Kavarian said he couldn’t estimate when the Main Street businesses would be allowed to reopen. Inspectors planned to enter the Silver building later Thursday morning and Kavarian said he would know more about what was needed to make the structure safe after that inspection.

Silver has long been opposed to seismically reinforcing his Brown Street buildings. Though he said he would begin the process in 2011, he said he didn’t feel the upgrades were necessary and the retrofits were never completed. Calls to Silver’s home and office were not returned Thursday.

Because it is adjacent to Silver’s properties, the city had previously closed the Molinari Caffe on Brown Street earlier in the week. The cafe sustained no damage during Sunday’s 6.0 earthquake and was in the process of opening Monday morning, when a city inspector informed café owner Rick Molinari that he would have to close shop.

Ironically, the popular coffee shop had opened earlier this summer in a location that had just undergone a $350,000 seismic upgrade by building owner Michael L. Holcomb.

For the shuttered restaurants, whose buildings were all found to be safe prior to the issues with Silver’s structure, the red tags Thursday were a severe blow. Velo Pizzeria owners Lewis Chilton and Daniel Sarao were devastated.

“We’ve been working on this project for a year and a half, and we finally managed to open nearly three weeks ago,” said a frustrated Chilton. “We’ve been investing our own personal money for so long and it hurts to be closed right now, and to possibly be closed through the busy upcoming holiday weekend.”

Wednesday, the day before the second round of city red tags relating to Silver’s building occurred, Velo had been operating in full swing, with diners eating both inside the restaurant and at tables along the sidewalk in front of the building.

“It’s just so frustrating to be in a building with an owner like Michael Holcomb — who does everything right — and still get shut down because a neighboring owner refused to comply with the law,” said Chilton, whose property is also owned by Holcomb.

“I hope the city of Napa is very aggressive in getting us up and running again. I worry the most about our employees who have bills to pay and can’t work.”

The city passed an ordinance in 2006 that required owners of hazardous buildings to complete seismic retrofits by the summer of 2009. According to Napa’s municipal emergency abatement code, the city can take immediate action, without warning, against any code violations that are deemed to pose an imminent or immediate danger to persons or property.

The council on Tuesday urged city staff to contact Silver and try to work with him. City staff had done that Silver by Thursday morning, City Councilman Alfredo Pedroza said Thursday.

City officials were hoping Silver fixes the problem on his own accord, but were prepared to exercise options to do force him to do so if he declined, Pedroza said.

Pedroza said City Manager Mike Parness was working with others to determine what should happen next. He said he expected a decision to be made later Thursday. The City Council will meet with city attorneys in closed session Friday, Pedroza said.

If Silver works with the city quickly, Kavarian said the red tags could be lifted as soon as work is underway on reinforcing the Brown Street building. Similar allowances have already been made for the Second Street Napa Square development, a portion of which was severely damaged in the earthquake and has caused nearby businesses to also be red- tagged.

Napa Square owner Harry Price is working with city staff and the nearby businesses to mitigate the situation as quickly as possible. Crews were already out working along Second Street by Wednesday afternoon.

Holcomb, who also owns some of the affected buildings on Second Street, said that working with Harry Price has been smooth and easy. “Frankly, it’s been like night and day between Harry (Price) and (Silver),” he said Thursday morning, as he sadly watched Kavarian tape red signs to several more of his buildings.

“Harry has been out there, trying to figure it out, helping the businesses. It hasn’t been the same on Main Street.”

Meanwhile, to help his tenants deal with the difficulties from the closures, Holcomb said he wouldn’t be charging his Main Street tenants rent in September. “We will all pull together and come out of this tragedy stronger,” he said.

Steve Hasty, owner of the Fagiani’s building said he commended the city for acting quickly to protect public safety, then reversing itself when engineering plans showed that his structure was not vulnerable.

“I think the city is very focused on keeping business open, not closing things, he said.

813 Main, The Thomas at Fagiani's restaurant/bar

Napa's Chief Buidling Official Dan Kavarian tapes a red tag Thursday morning  to the door of the recently opened Velo Pizzeria on Main Street. Though the restaurant was recently seismically retrofitted, it abuts a masonry building on Brown Street that poses a safety threat to adjacent structures, according to the city. The Brown Street building, which has also been red-tagged, is owned by Brian Silver, a Napa attorney.

who has historically refused to bring his buildings up to earthquake codes.

Two buildings owned by Brian Silver on Brown Street, opposite the Historic Courthouse, sustained earthquake damage. Because they present a danger to surrounding properties, the city has now red-tagged seven surrounding businesses.