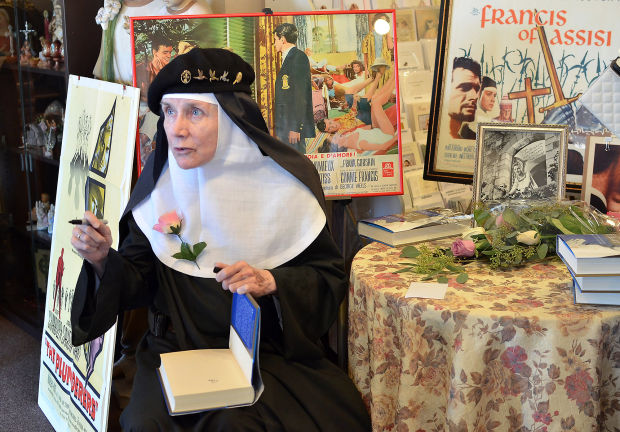 SATURDAY - JULY 27, 2013 - NAPA, CA - Dolores Hart, a Hollywood actress in the 50s and 60s, became a Catholic nun, abonding her career after starring opposite many of Hollywood's leading men, including Elvis Presley. Hart was in Napa this weekend signing her autobiography "The Ear of the Heart" at St. Joseph's religious bookstore. She also gave a talk at Kolbe Academy & Trinity Prep on Sunday night. Lisa James/Register 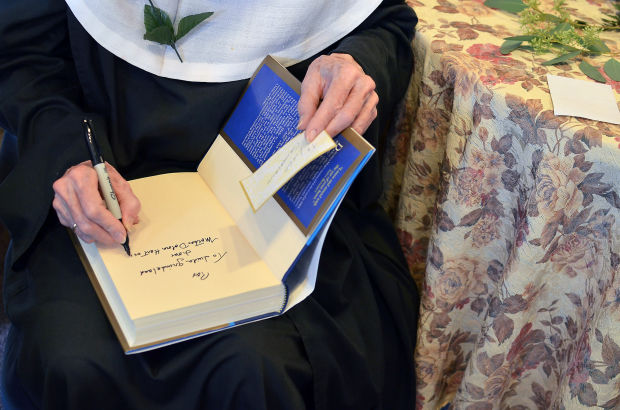 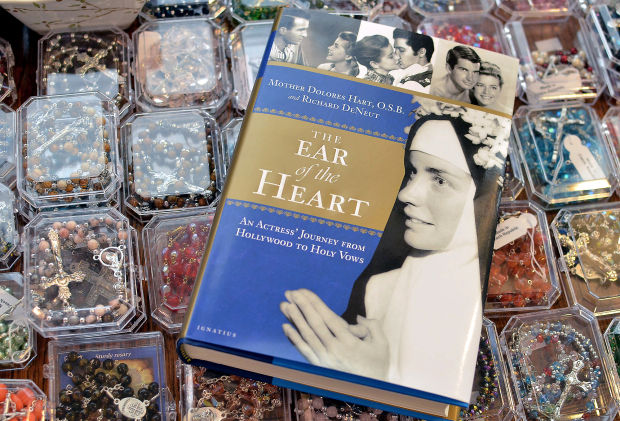 SATURDAY - JULY 27, 2013 - NAPA, CA - Dolores Hart's autobiography "The Ear of the Heart", tells the story of the Hollywood actress who became a Catholic nun in 1963. Hart was in Napa this weekend signing her at St. Joseph's religious bookstore. Lisa James/Register

In 1957, Dolores Hicks was only a teenager and a freshman at Marymount College in Los Angeles when a talent scout spotted her in a college production of “Joan of Lorraine,” a play based on the story of the French heroine Joan of Arc.

The talent scout invited her for a screen test for “Loving You,” a Paramount Pictures movie starring Elvis Presley. It was a very good start for a young woman who had grown up in Chicago and Hollywood, dreaming of becoming an actress.

After leaving the school now known as Loyola Marymount University, Hicks, who took the stage name Dolores Hart, spent the next six years acting in movies with other stars, including Anthony Quinn, Montgomery Clift and Myrna Loy. But in 1963, after 11 movies and a Broadway play, Hart, then 24, stunned Hollywood when she abandoned her promising career, broke off her engagement with her architect fiance and entered a monastery in Bethlehem, Conn.

This weekend, Mother Dolores Hart, wearing her habit and sporting a beret, came to Napa to discuss her autobiography, “The Ear of the Heart” — co-written with Richard DeNeut and published by Ignatius Press — and sign copies of her 539-page memoir. Her visit included a stop at Saint Joseph Store on California Way.

Mother Dolores, who converted as a child to Roman Catholicism, had visited the monastery at the suggestion of a friend.

“It was a gradual understanding,” she said, referring to her faith and her decision to enter religious life.

Now 75, Mother Dolores continues to live at the Benedictine Abbey of Regina Laudis in Bethlehem, home to 39 nuns who pray seven times during the day and once at night. Over the next few days, Mother Dolores, who has been on a national book tour since her autobiography was published in May, will travel to Sacramento, Santa Rosa, San Francisco and Santa Clara.

“Making movies is something I got in very early,” she told a dozen people gathered at Saint Joseph Store on Saturday.

She recalled her experience on her first day of shooting “Loving You” with Presley. The actors were to film the last scene of the movie, a goodbye kiss. About 150 people were on the set, Mother Dolores recalled.

“Wally, come over here. Put something on her ears! They’re turning red!”

Another take. A few seconds later, the director once again ordered Westmore back.

“Wally, get Elvis’ ears. They’re turning red, too!” she recalled.

“We were both young,” she said. “It was his first Technicolor film and my first film. And it was, I think, probably the first on-screen kiss for both of us.”

Her favorite movie was “Lisa,” a drama about a Jewish woman who is a victim of medical experiments at a concentration camp during World War II.

After 25 years in the monastery, actor Karl Malden called to ask her to resume becoming a voting member of the Academy of Motion Picture Arts and Sciences. She had been a member since 1960.

Hart could not say which movies she has supported. However, she hinted at one. “I must say that I thought ‘Les Misérables’ was an amazing film,” she volunteered.

Rosie Suttie, a 61-year-old mother of four children who had once considered becoming a nun, was among those who attended Saturday’s book signing. “She’s so down to earth,” said Suttie afterward.

Lee Hoagland, 75, of Napa left the store with three autographed books for an aunt, a friend and himself. Her story is interesting, he said, as Mother Dolores continued to sign books nearby.

He first heard Mother Dolores’ story years ago. “That’s unusual,” Hoagland said of her decision to  join the monastery after doing so well in Hollywood. “But that’s her calling, her vocation. And she did it ... and good for her.”

“That’s what everybody should do ... (do) what their calling is,” he said. “Not worry about what other people will say.”

Mother Dolores’ book has been a bestseller for Ignatius Press, a company based in San Francisco that publishes books by Catholic writers and thinkers. The company has sold 25,000 copies and is printing more books, said Anthony Ryan, marketing director for Ignatius Press. The book tour of 50 cities concludes at the end of the year.

Officers found 5 pipe bombs, more than 50 firearms, and 15,000 rounds of ammunition during a Friday raid, the sheriff's office says.

The website is currently taking expressions of interest from people over age 65 and frontline essential workers.

CrossWalk Community Church was closed Sunday and will remain off limits through Wednesday, according to Pastor Pete Shaw.

The helicopter crew directed police to the apartment where the blinding green light had originated.

The county has started asking people to register their interest in receiving a COVID vaccine when supplies become available.

Many card recipients questioned if these federal stimulus payments were legitimate.

Described as an "eco-village," this housing development is now stalled at 80% completion amid financial claims against the sponsors.

SATURDAY - JULY 27, 2013 - NAPA, CA - Dolores Hart, a Hollywood actress in the 50s and 60s, became a Catholic nun, abonding her career after starring opposite many of Hollywood's leading men, including Elvis Presley. Hart was in Napa this weekend signing her autobiography "The Ear of the Heart" at St. Joseph's religious bookstore. She also gave a talk at Kolbe Academy & Trinity Prep on Sunday night. Lisa James/Register

SATURDAY - JULY 27, 2013 - NAPA, CA - Dolores Hart's autobiography "The Ear of the Heart", tells the story of the Hollywood actress who became a Catholic nun in 1963. Hart was in Napa this weekend signing her at St. Joseph's religious bookstore. Lisa James/Register