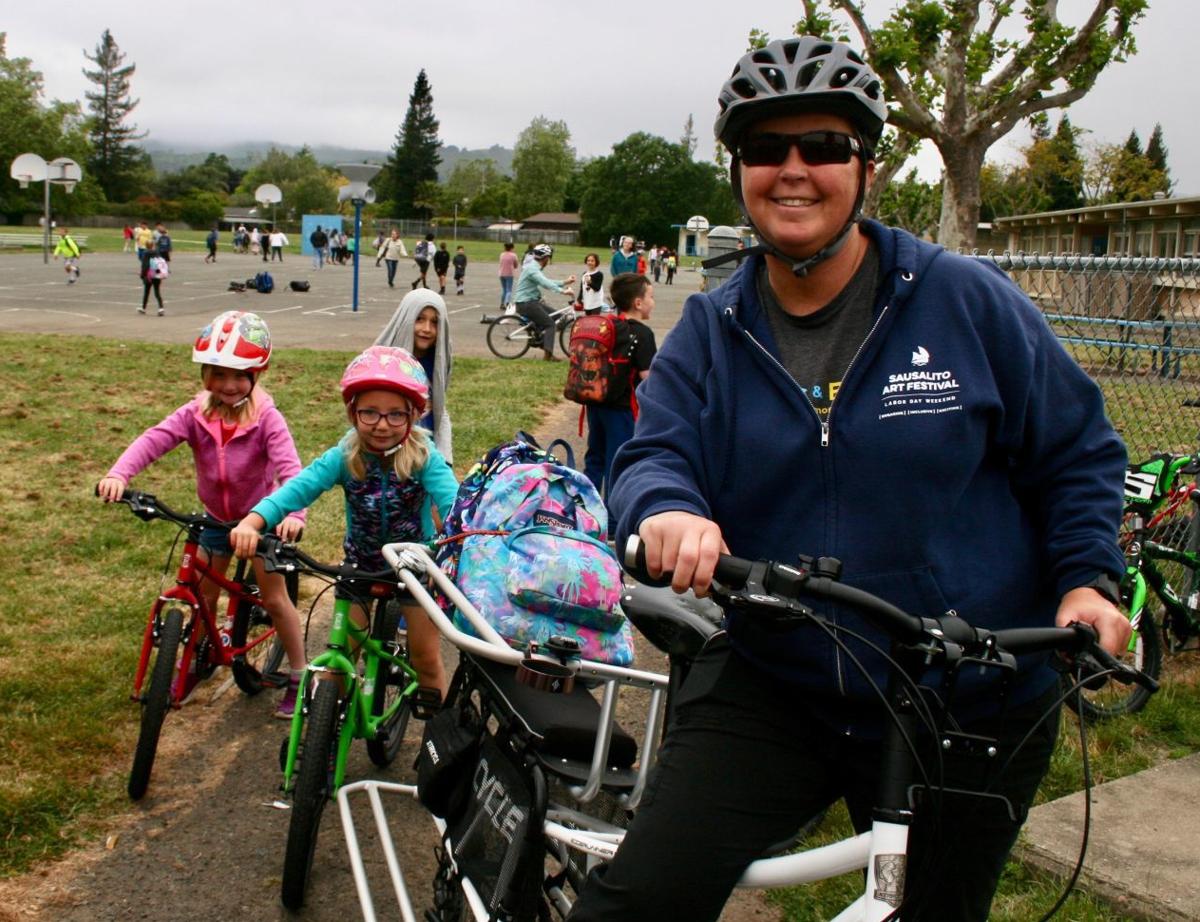 Stacie Gregory rode with her daughters, Sierra and Kyler, to Northwood Elementary School in Napa as part of 2019 Bike to Work & School Day. 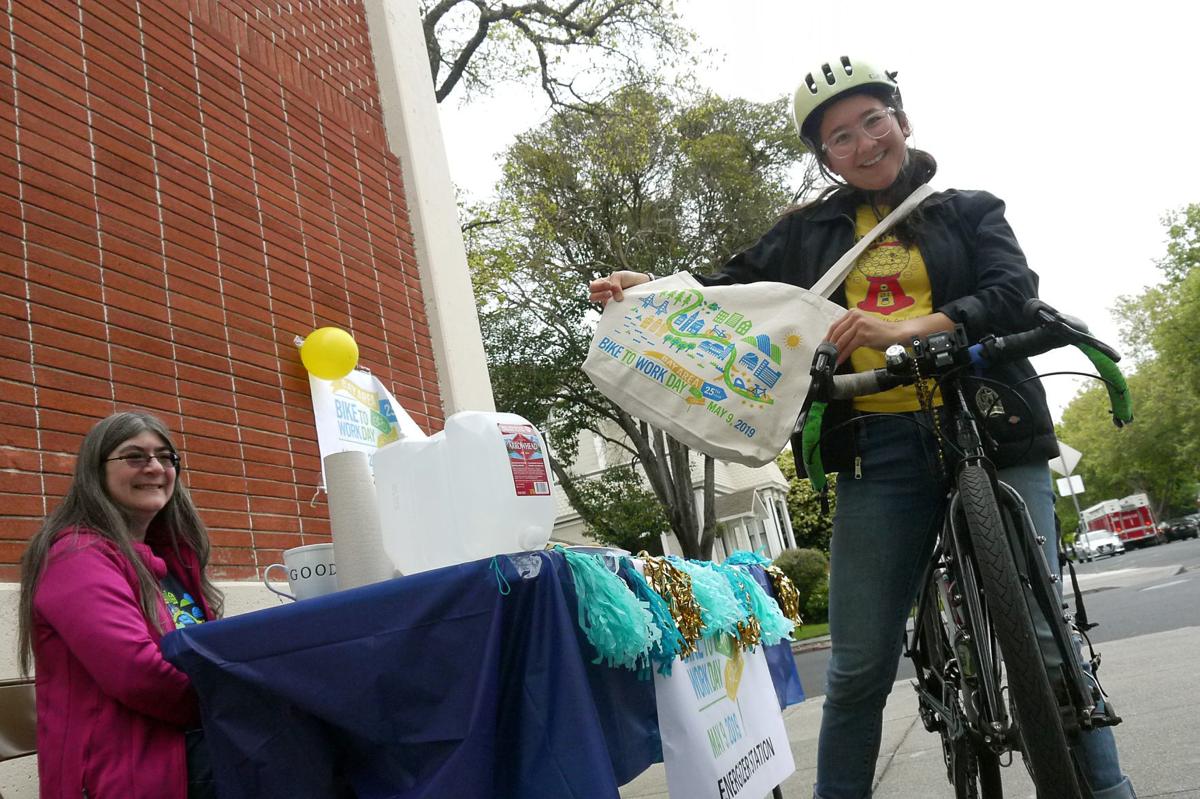 Anna Yip show off her Bike to Work Day tote bag at the City of Napa's energizer station. Libby Clark is staffing the station. 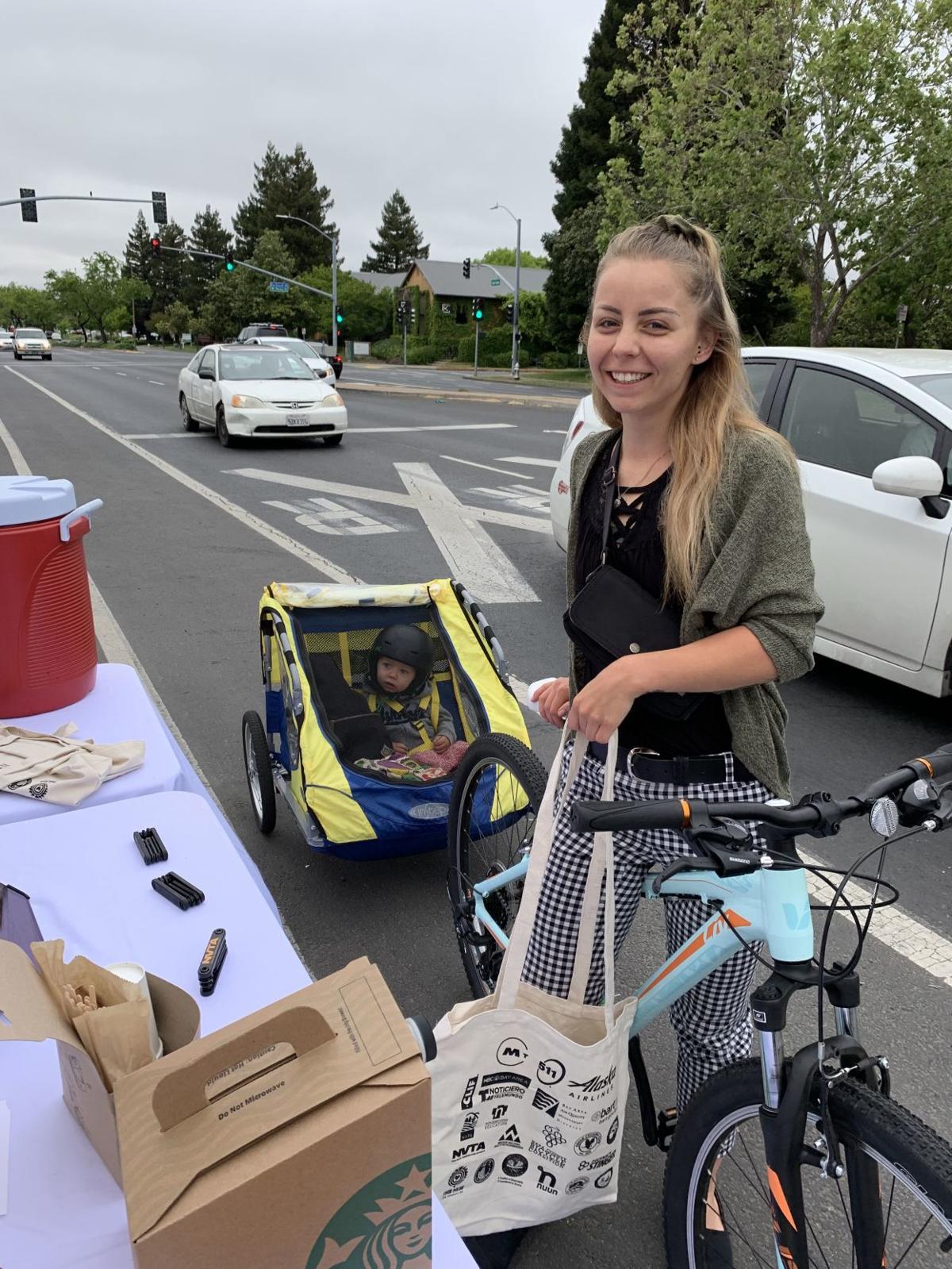 A cyclist with a child in a bike trailer stopped at the energizer station on Soscol Avenue Thursday morning. The station, provided by the Napa Valley Transportation Authority, provided coffee, snacks and goodie bags to participants.

Zac Soper paused during his daily, 15-mile bicycle commute from the southern city of Napa to B Cellars winery near Oakville to ponder the Napa County biking experience.

He has a suggestion that many motorists would also make. This biker would prefer smoother pavement.

“I go down Jefferson every morning,” Soper said. “Some parts of Jefferson are pretty rough.”

The Bay Area’s 25th annual Bike to Work Day on Thursday came at a time when the Napa Countywide Bicycle Plan is being revised. A goal of the 233-page draft plan is to improve the cycling environment for residents and visitors.

Who better to opine on what’s needed to make Napa more bike-friendly than the hundreds of local Bike to Work participants? They are the ones out where the rubber hits the road.

Soper was among the cyclists who stopped at the Bike to Work energizer station set up in the morning where the Napa Valley Vine Trail crosses Jefferson Street. The station offered scones, bananas, apples and other treats to Bike to Work Day participants.

Riding the county bike freeway that is the Vine Trail poses no safety problems for Soper. But, after the Vine Trail ends in Yountville, he makes the final leg of his cycling commute on Highway 29 a few feet from motorists.

“I figure the same people see me every day,” Soper said, hoping that familiarity breeds caution among the drivers.

Tom Gorton stopped at the Jefferson Street energizer station. He was making his first bike commute from his north Napa home to the airport industrial area about 10 miles away.

Some major roads such as Soscol Avenue don’t have well-defined bike areas, Gorton said. He’d like a little more protection. On busy streets, he’d like to see more than bike lanes.

“Lines don’t really do that much,” he said. “Barrier-type things, if possible.”

Beth Henkelman regularly bikes four miles from her home to her job at the Napa County library. She said the Vine Trail through the city has become a hang-out spot for youths who break bottles.

“I mind my own business. They mind their own business,” Henkelman said. “It’s mainly the glass.”

She doesn’t feel threatened on the Vine Trail through the city, which is a narrow corridor lined with fences. Still, she recalled the January killing of a cyclist on the trail at night, a time when she isn’t riding.

“It should have cameras or something,” Henkelman said.

Tom and Christie Wolf teach at New Technology High School near downtown Napa. They too took time at the Jefferson Street energizer station to think about how to make Napa a better biking place.

“We have our students asking the same question,” Tom Wolf said. “It will be interesting to see what they come up with.”

The early feedback he’s heard from them calls for lights along the Vine Trail through the city.

Christie Wolf would like to see more places to lock up bikes around town. She’d also like to see signs to make people aware of potential “door zone” accidents – when the driver of a parked car opens a door that hits a bike rider.

She bikes to work about twice a week, partly to be an example. “A big motive for me is students,” Christie Wolf said. “They’re watching.”

Bay Area Bike to Work Day organizers say that a million people in the region live within five miles of their workplaces. The annual event is designed to encourage people to leave their cars behind and give bike commuting a try.

There’s work to be done. About 1 percent of people commute to work by bike in Napa County, according to the 2017 American Community Survey by the U.S. Census Bureau.

But biker commuters were a familiar sight on Thursday morning for Bike to Work Day, which was also celebrated locally as Bike to School Day. The Napa County Bicycle Coalition estimated a total of more than 1,400 adults rode to work and children rode to school. Northwood and Browns Valley elementary schools each had more than 100 students participating.

The Napa County Bicycle Coalition partners with with the Napa County Office of Education to produce the local version of the event.

The Napa Valley Transportation Authority is working on the Napa County Bicycle Plan update. The draft version calls for adding 453 miles of bike paths, lanes and routes to the 142 miles that already exist.

Go to https://bit.ly/2VrGkL8 to see the proposed bike plan. The NVTA Board of Directors is scheduled to adopt the updated version in September.

Napa County has 142 miles of bike paths, lanes and routes and another 453 miles proposed, with an eye toward serving riders who are at least s…

A reporter gives Napa's Bike to Work Day a try

Bike to Work Day is designed to encourage people who usually drive to ditch their cars and give pedal power a try – and that’s what I did.

Jonathan Garza and Isaac Dolido will celebrate their eighth anniversary together on June 1. The following day they will leave on a 545-mile, s…

Napa County's bike champions offer tips for you to join them

Kate Miller and Greg Stueland advise how others can become cyclists for everyday chores.

Stacie Gregory rode with her daughters, Sierra and Kyler, to Northwood Elementary School in Napa as part of 2019 Bike to Work & School Day.

Anna Yip show off her Bike to Work Day tote bag at the City of Napa's energizer station. Libby Clark is staffing the station.

A cyclist with a child in a bike trailer stopped at the energizer station on Soscol Avenue Thursday morning. The station, provided by the Napa Valley Transportation Authority, provided coffee, snacks and goodie bags to participants.