A new showroom has been proposed for the Hanlees Subaru car dealership on Soscol Avenue in Napa. 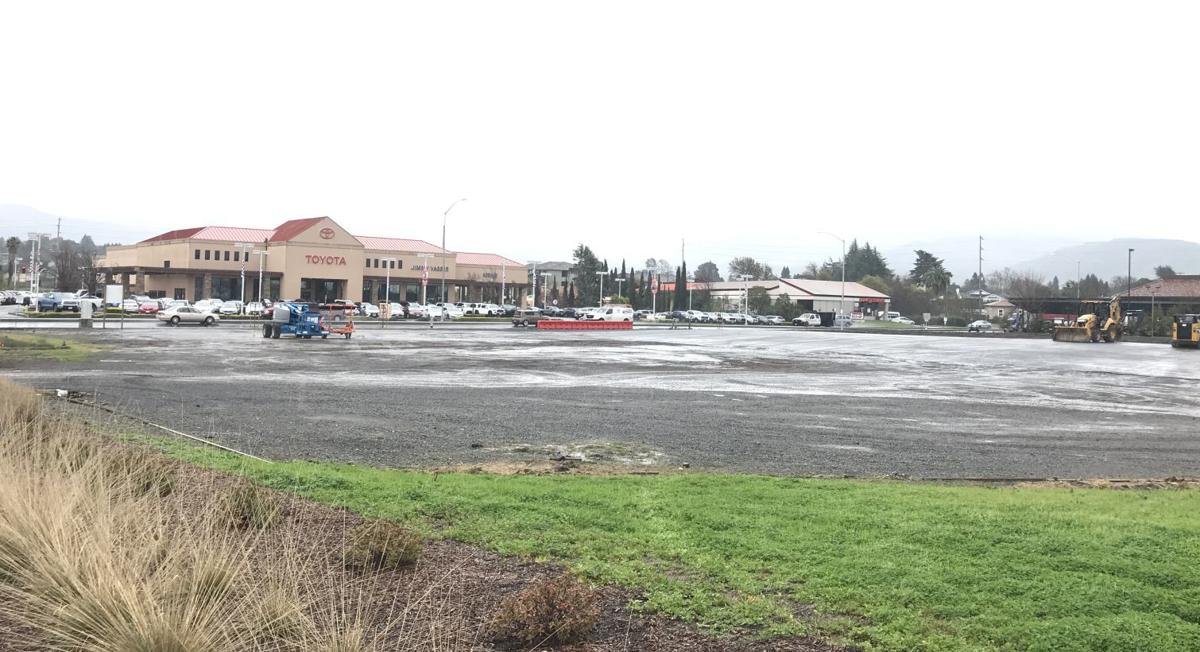 This property near a recently opened extension of Saratoga Drive near Soscol Avenue is the proposed site of a Hanlees Subaru showroom, for which the Napa city Planning Commission reviewed an application last week.

A new showroom has been proposed for the Hanlees Subaru car dealership on Soscol Avenue in Napa.

This property near a recently opened extension of Saratoga Drive near Soscol Avenue is the proposed site of a Hanlees Subaru showroom, for which the Napa city Planning Commission reviewed an application last week.

The early request from Napa officials on a future Subaru showroom is in: More Napa and less showroom.

A preview of the future home of Hanlees Subaru on Soscol Avenue drew a cool reception from the city Planning Commission, whose members asked designers for a more distinctively local style for the dealership – something less anonymous than the rectangle of metal paneling and sheet glass presented to city staff.

The comments by city leaders revive a lingering debate over the proper architectural look for Napa’s Auto Row, the stretch of Soscol south of downtown where car dealers have done business for decades. Arriving in the years after the city pushed for “Napa-esque” earth tones for a new Honda showroom, and a midcentury-modern double-wing roofline at a yet-unbuilt Chrysler dealership, the boxlike design offered for Hanlees Subaru at the intersection with Saratoga Avenue apparently did little to impress members of Napa’s land-use authority.

“We need to open up the box and jump out and not follow the cookie-cutter approach, and put in something unique that’s Napa-esque, that’s unique to Napa and not something you can see in every town,” said Commissioner Michael Murray in comparing the Hanlees design to similar-looking dealerships across the Fairfield auto mall in Solano County.

The new showroom at 473 Soscol Ave., the latest addition to a land tract long owned by the Gasser Foundation, would provide a separate home for Don Lee’s Subaru dealership that shares space with his Volkswagen outlet just north. A single-story structure on the 2-acre lot would contain 17,138 square feet of floor space just north of the Gasser Building, with driveway access from Soscol and the recently opened Saratoga Drive extension toward The Braydon apartment complex.

But the preoccupation of planners during their first up-close look at the plan last week was the face the Subaru building would present to passers-by – a face that would be in plain view on all sides with the opening of Peatman Drive to the west of Napa’s showroom corridor.

In March, Lee denied taking a “cookie-cutter” approach to the Subaru showroom and described the look as “very similar to the building we already have where Subaru is,” while pointing to local Ford and Nissan dealerships that already use aluminum cladding. “I hope that we can retain the current (Subaru) brand imaging,” he said at the time, though he added that “obviously we would like to accommodate the wishes of the community.”

Commissioners, however, were reluctant to let pass what they saw as a stock corporate design, and asked not only for more Napa-style elements but greater details on the three sides not facing four-lane Soscol Avenue.

“One of the things Napa is trying to get back, if it ever had it, is a gateway to downtown – and it’s challenging because you’re driving through the Auto Row to get there,” said Paul Kelley. “It seems to me that a stock model plan from anybody coming here doesn’t pass muster with the Planning Commission. We’re in a position that we can ask for more, so we typically do.”

Beth Painter went further still, asking city staff to expand their vision for Soscol Avenue beyond selling cars – particularly with new roads in place nearby and more than 300 apartment units under construction along Peatman Avenue.

“I’d like us to stop thinking of this as Auto Row,” she said. “We have a significant amount of housing that’s being built just adjacent to this site. It’s really a mixed-use area and we’re trying to create a lot of walkability between the apartments (and) the bike trail, and this is going to be more a hub for a mixed-use area than simply Auto Row. … How do you put a building not necessarily into an Auto Row, but into something that is a gateway and an active area where residents will be living and walking right by your front door?”

Commissioner Gordon Huether, a Napa sculptor who is under contract with the Gasser Foundation to create an artwork near the future showroom, recused himself from the debate.

No date was announced for a Planning Commission vote on the project. Lee, the auto dealer, said last month construction of the Subaru building would follow work on his new Chrysler showroom, which planners approved in November.

Don Lee’s Subaru and Volkswagen dealership on Soscol Avenue has been surrounded by construction for months as new apartments, road improvement…