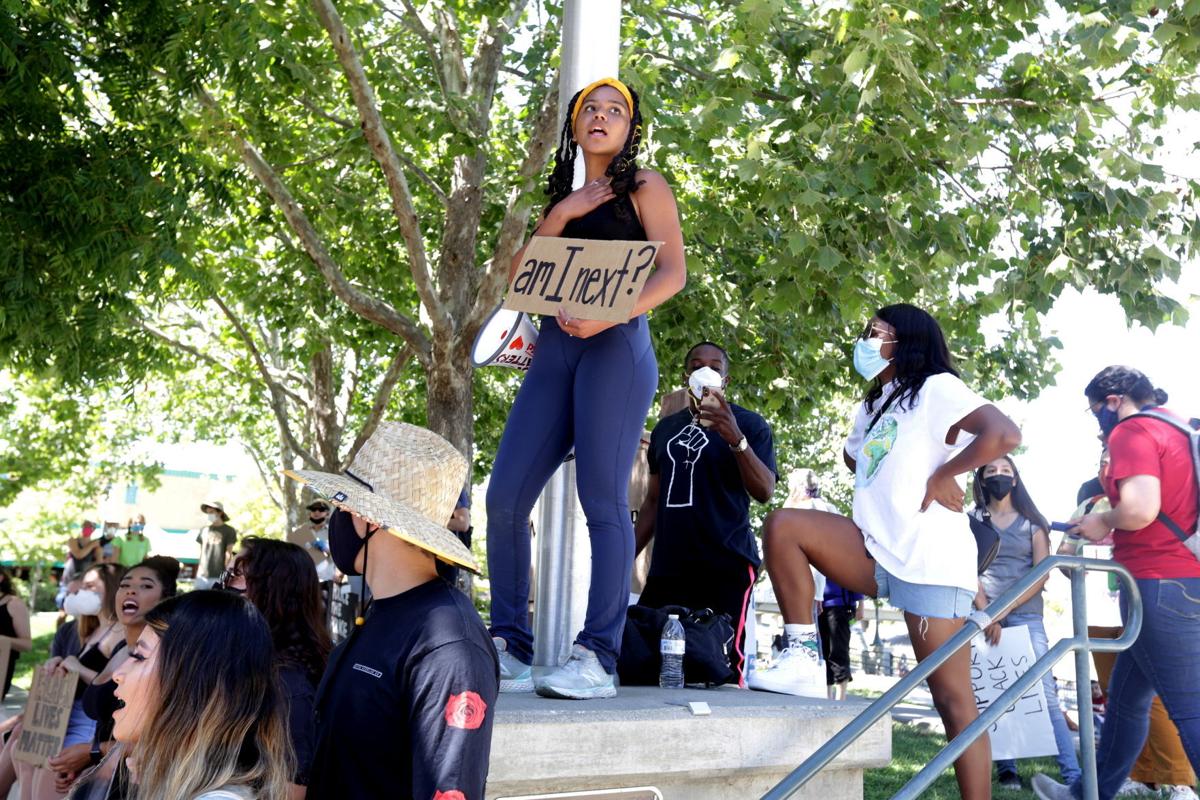 Veterans Memorial Park in downtown Napa has been the local hub of protests against police brutality against people of color, including a demonstration on June 14. 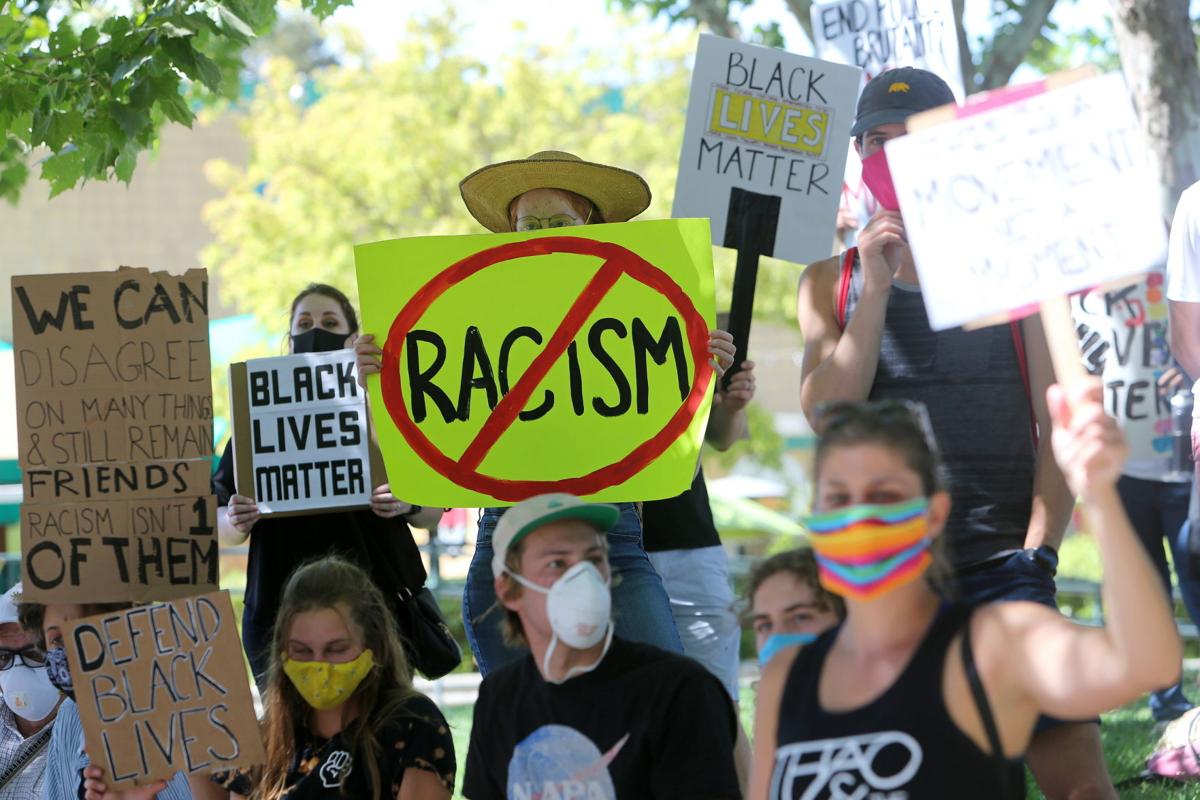 Some 100 people gathered at Napa's Veterans Memorial Park on June 14 in the opening minutes of a protest against police brutality and racial discrimination, one of numerous such protests to take place nationwide since the death of George Floyd during a May 25 arrest in Minneapolis was captured on video.

A new proclamation supported by the Napa City Council declares the legacy of racism and discrimination to be a threat not only to civil rights, but to the public health of minorities.

Approved in a unanimous council vote Tuesday night, the resolution labels systemic racism and discrimination as a “public health crisis” depriving people of color and other minorities of an equal shot at health, housing and public safety, as well as education and employment – all factors that backers called contributing factors to lifespan and quality of life.

Following more than three dozen statements of support by email and telephone – and the endorsement of California’s public health director – all five Napa council members voted in support of the declaration, which begins a process for seeking community and staff guidance focusing on identifying systemic racism in city employment, training, development and housing programs.

“I think a lot of people would like to think that racism doesn’t exist in Napa,” said Councilmember Mary Luros, an attorney who recalled her past pro bono work for Legal Aid and described encountering 1950s housing covenants barring non-whites from buying Napa homes.

“Having heard all those people talk, it’s clearly evident that this is an issue for us. … People of color face vast disparities in terms of job opportunities, health care, education, safe housing and food security due to their ethnicity or skin color.”

The declaration is the confluence of the two trends that have dominated debate in Napa and across the country in 2020 – the toll of a coronavirus pandemic that has claimed more than 196,000 American lives since March, and the wave of protests against racial injustice that arose after the death of George Floyd, a Black man, during an arrest by Minneapolis police in May.

Members of the People’s Collective for Change, which organized a series of downtown anti-racism protests starting less than a week after Floyd’s death, entered talks with Napa Police Chief Robert Plummer over the summer to discuss reforms of use-of-force policy and other policing issues.

The city’s Rainbow Action Network has been pushing for a public health declaration since July and has worked with city officials on the language, said Anne Sutkowi-Hemstreet, Community Programs Manager for First 5 Napa, which created the network to work for justice and inclusion for LGBTQ residents.

Napa’s public health declaration gained strong backing from California’s public health director Dr. Karen Smith, who served in the same role in Napa County before her promotion to state office in 2015. During a videoconference with council members, she described the barriers to equal opportunity less as the result of open bigotry by individuals and more as the by-product of policies that shortchange the disadvantaged.

“Systemic racism does not mean systems filled with racist people,” said Smith, who continues to live in Napa. “It means policies and ways of doing business that systematically and disproportionately limit people’s opportunities based on their race or ethnicity. … Unfortunately, we have policies and practices that disproportionately limit the opportunities of some members of our society more than others.”

Smith cited disproportionately high levels of poverty for Napa’s minority communities in a 2019 study by the Haas Institute for a Fair and Inclusive Society – while 39% of city residents are Latinx and less than 1% are Black, they accounted for 55% and 28%, respectively, of Napa’s families who live below the standard for self-sufficiency. The coronavirus pandemic has made such inequities even starker, she argued, pointing to a Latinx community that has accounted for more than half of Napa County’s reported COVID-19 infections.

The failure to cope with discriminatory policies of the past has set minority residents behind the curve on the social determinants that improve the chance at good health, according to Smith, including access to education, employment, safe housing and high-quality food.

While the long-term effects of Napa’s declaration of inequality as a public health threat remain to be seen, Councilmember Scott Sedgley praised the gesture as a reminder of the need for vigilance in protecting the most vulnerable.

“I’m a product of the ‘60s, and looking back at what we went through with the riots and the Free Speech Movement and Vietnam and all those things, you get into this false sense of security that as a society, we’ve moved ahead, we’ve advanced, we’re better than that,” Sedgley said. “Personally, it could be that I got complacent, that I needed a kick in the pants. This is a continuing education moment: ‘Hey, we live in our bubbles in the community and we have to see beyond that.’”

“Not everybody starts at the same point on the track,” he continued. “Those that are starting a little bit behind, we as a civilized society need to help them catch up and have the same opportunity.”

In coping with racism and inequality, Napa Valley residents talk it out in search of solutions

How might people who share a community and little else understand one another's views on racial justice and economic inequity? For one group o…

A 15-member committee will advise police on procedures and community relations.

For a few anxious minutes, Napa Police feared that someone had fired a gun as they began their search.

Deep wounds of racism should not be minimized

Napa is not a racist community

Letters: This is virtual signaling out of control.

Mayor Jill Techel is retiring after 16 years in the City Council's top job.

The City of St. Helena is planning a virtual community roundtable on diversity, equity and inclusion

No. 8 Story of 2020: A year of nationwide protests comes to Napa

The wave of anti-racism demonstrations inspired by the death of George Floyd left its mark in Napa, as elsewhere in the country.

Veterans Memorial Park in downtown Napa has been the local hub of protests against police brutality against people of color, including a demonstration on June 14.

Some 100 people gathered at Napa's Veterans Memorial Park on June 14 in the opening minutes of a protest against police brutality and racial discrimination, one of numerous such protests to take place nationwide since the death of George Floyd during a May 25 arrest in Minneapolis was captured on video.