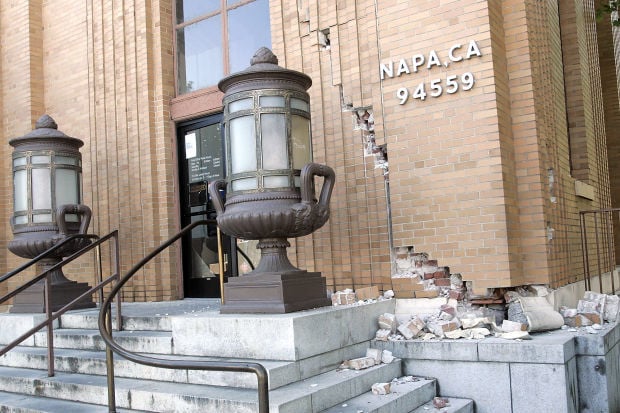 A local developer got the go-ahead to recast the Depression-era landmark on downtown Second Street into a 163-room hotel, after the City Council granted a rezoning and a building agreement Tuesday night.

Over the next several years, James Keller aims to use the longtime post office as the seed of a hotel that will extend back and upward from a tan-brick edifice that has been a familiar sight to Napans since its opening in 1933.

Even in a time with increasing questions about downtown hotels’ effects on traffic and housing supplies, Keller’s mission to give the Franklin Station building a second act won wide acclaim from council members. They unanimously supported the project and praised its creator with saving the former post office from destruction.

“In my 12 years, this has been one of the most anticipated, important projects I’ve been asked to look at,” said Peter Mott, in his final meeting on the Napa council, as he credited the post office overhaul with a civic value beyond guest beds and tax revenue.

“I really thought we were going to lose this building. It’s one of those iconic buildings we all feel is important. This is one of those pieces of glue that make you say, this is a part of our history and we need to preserve it.”

Local advocates for increased housing also reached an agreement with Keller, as the Napa Housing Coalition convinced the developer to pursue steps toward creating housing elsewhere in the city, such as pouring funds into a new complex or developing a project that includes units offered at affordable rents. Coalition member Chuck Shinnamon called that step a way to address growing housing shortages in Napa, where tourist-based jobs are increasing even as the rental vacancy rate has dropped to just 1 percent.

The prospect of Napa Valley tourists spending their nights inside the landmark is a complete turnabout from the Franklin Station building’s bleak future after Aug. 24, 2014, when the South Napa quake ripped long cracks through its brickwork and shattered the six tall windows illuminating its lobby.

Faced with a repair bill estimated at $8 million, the U.S. Postal Service instead pondered razing the downtown post office for a half-million dollars. That possibility sparked an outcry among Napa residents and preservationists, who organized to call for the postal building’s preservation and repair. The federal government backed off its suggestion to tear down the landmark and put it up for sale in August 2015, nearly a year after the earthquake.

Another 19 months would pass before Keller purchased the post office building in 2017 — to launch a repair job other developers have described as one of Napa’s toughest in recent memory, due to the extent of quake damage and the need to preserve a landmark’s historic character. Franklin Station, the work of the longtime Napa architect William H. Corlett, was added to the National Register of Historic Places in 1985 as an example of the Art Deco-themed public buildings sponsored by the federal government in the Depression years.

“Many people looked at it, including myself, and shied away. I thank Jim Keller for coming to the plate, because that’s the jewel of Napa,” the veteran Napa developer George Altamura told council members.

Keller’s proposal would conserve about 20 percent of the existing structure, from the north-facing front staircase to the depth of the post office lobby, according to plans filed with the city. An expansion would stretch to the south and upward, where city zoning allows a maximum height of 60 feet. Keller also could apply for a height exception to allow a rooftop lounge similar to the one included at the nearby Archer Hotel Napa, which opened on First Street a year ago.

The hotel’s footprint would take over the site of Zeller’s Ace Hardware on Randolph Street to the south. Keller earlier struck a deal to buy the Zeller’s parcel from its owner Dick Clark and help him find a new store location.

Parking space for hotel visitors would be provided by an automated garage to be built east on Second Street, atop a surface lot the city has sold to Keller. The new parking structure would hold about 228 vehicles, with 65 slots set aside for the public, and include 7,000 square feet of retail space.

The city’s development agreement with Keller calls for him to have a building design ready for city review in two years, and to line up financing and building permits by 2023, according to Planning Manager Erin Morris.

Franklin Station’s hotel conversion sailed through Napa’s approval process over the past month, winning the Planning Commission’s endorsement in October along with support from the Cultural Heritage Commission, which reviews any plans to modify historic buildings in the city.

The U.S. Postal Service has backed off demolishing downtown Napa’s earthquake-cracked post office. But for the building’s defenders, the truly…

Moskowite Corners Neighborhood Center, a longtime rural landmark and roadway stop, has a new owner with a tentative plan to open a new venture…

A chain of hardware stores new to California may well find a new home at the old Orchard Supply Hardware site in north Napa.

Is this the world's first fully robotic AI café in the world?