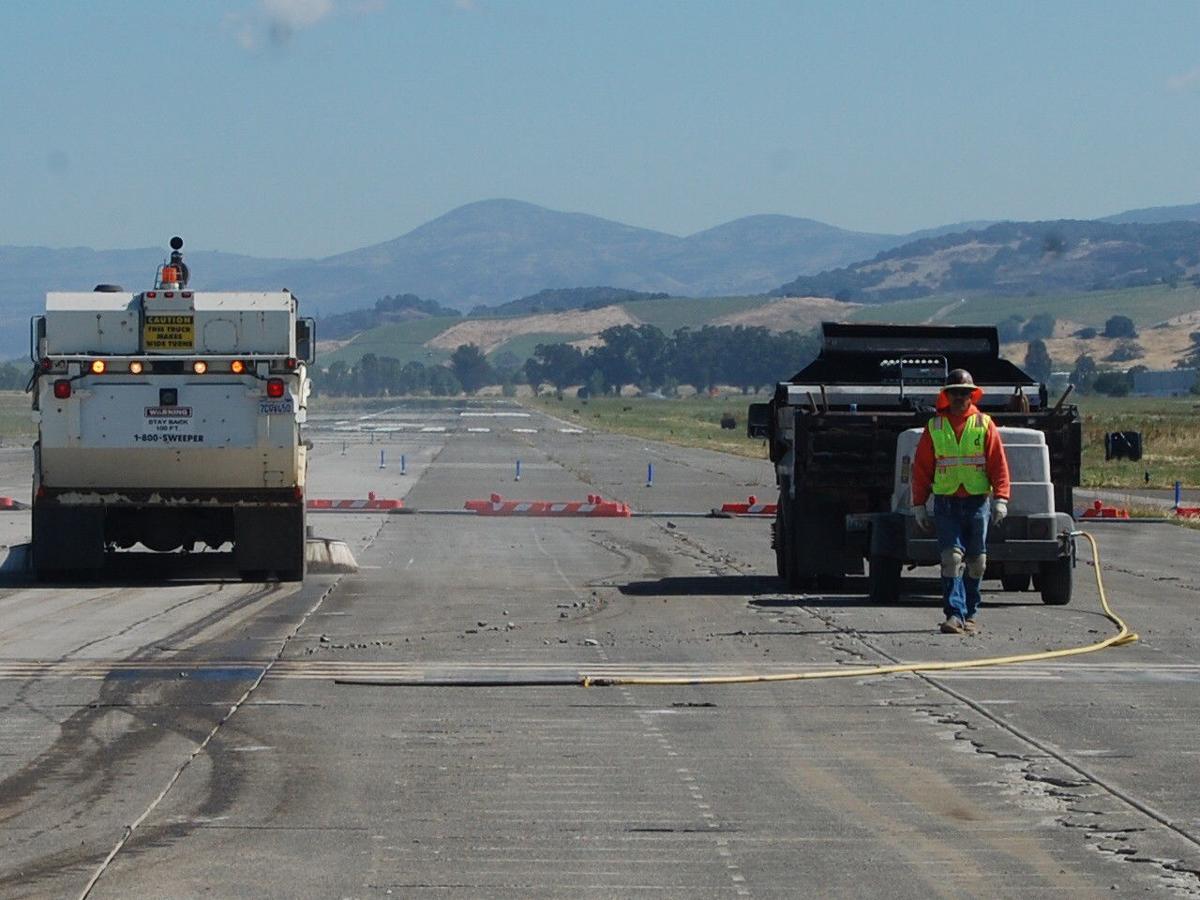 Workers are busy repaving runways this summer at Napa County airport. The World War II-era concrete is being cracked so it can be used as a base for an asphalt surface. 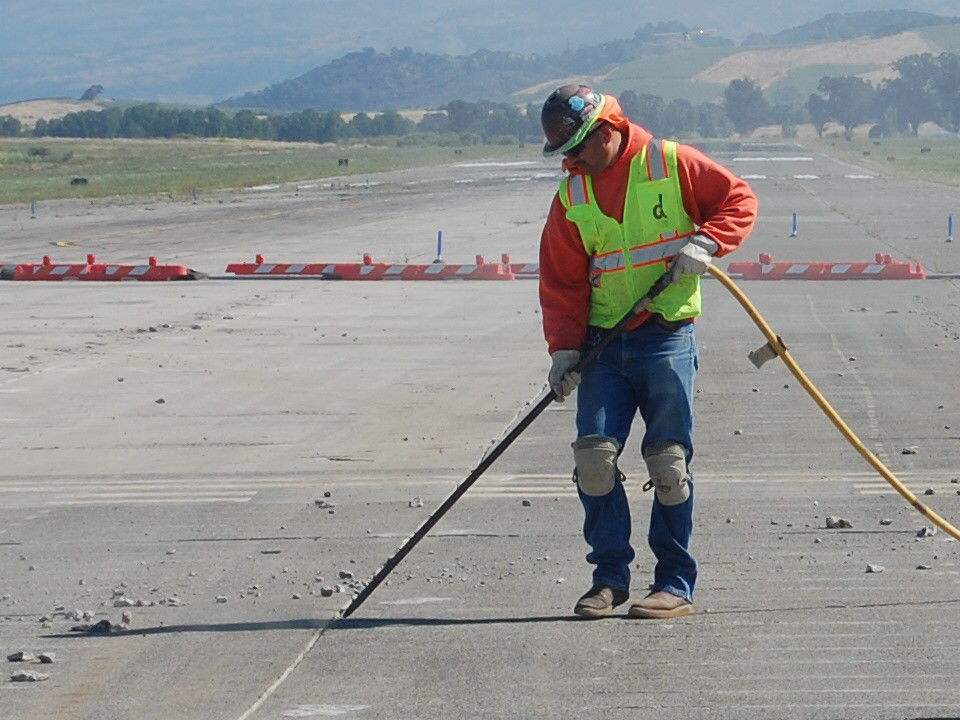 A worker cleans out the joints in the concrete runway at Napa County Airport in preparation for repaving.

Workers are cracking the 76-year-old portland cement concrete that is the runway pavement. The concrete will be left and become the base for the new asphalt surface.

The original World War II-era runways at the airport have stood the test of time. But now it’s time for renovation.

Napa County airport isn’t a commercial flight airport like the much larger ones serving Oakland and San Francisco. Locals aren’t driving there on a regular basis to catch flights. For most Napans, it is a world unseen except maybe in the distance from the Butler Bridge.

Still, the county-owned airport is the aerial gateway to wine country for private and charter flights and home to small planes flown by local pilots. It has 50,000 takeoffs and landings in a typical year.

The goal is to keep the airport by south county wetlands up-and-running for planes, even while the main runway is reborn.

“We’re always open, with the exception of some night closures toward the end of the project,” airport Manager Greg Baer said.

Achieving this is taking a six-phase effort. The airport has three runways—a main runway for prevailing winds, a much shorter parallel runway and a crosswind runway used when wind conditions warrant. All of these runways are scheduled to be open or closed at various times before the project finishes in October.

For example, the main runway is presently open, though shortened to 4,146 feet compared to the usual 5,931 feet. The crosswind runway is closed so renovations can be done in the area where it overlaps with the main runway.

“We put a lot of effort in the planning of this project,” Baer said. “The phasing plan was intended to keep us open as much as possible. That’s why it’s kind of complex.”

“The only time I would be impacted is say there is a really strong wind that’s favoring the runway that’s under construction,” Lyon said. “Then I’m going to have to weigh things out and see how much I want a crosswind takeoff or landing.”

If he was up in the air and a strong wind came up unfavorable for the available runway, he might land at Nut Tree Airport in Vacaville. If he hadn’t taken off, he might decide not to fly, Lyon said. But he doesn’t see this as being a frequent choice.

“It’s really not going to affect us little guys and when it’s done, it’s going to be nice,” Lyon said.

Consultants Mead and Hunt prepared a 2017 pavement index report on the main runway for the county. It found the runway in poor condition under Federal Aviation Administration standards.

The pavement problem apparently affects the bigger planes more than the small ones such as Lyon’s.

“But I can land my plane on grass strips,” Lyon said.

Baer said the concrete runway experiences spalling, with spots of pavement breaking up in such a way that could cause a blown tire. The airport must continually patch the damage.

Still, Baer isn’t complaining that a 76-year-old runway has wear-and-tear. He praised the original building job.

“When you think about it, the fact we’re still using it is very impressive,” he said.

Napa County Airport dates back to the U.S. Army’s desire for a local airfield to help with World War II coastal defenses. A deal called for the county to buy the land, the Army to build and operate the airfield during the war, then for the county to take over the facility.

Workers began pouring the concrete runways in November 1943, the St. Helena Star reported at the time. They poured it in 25-foot strips, 8 inches deep in the middle and a foot deep at the sides.

Ninety percent of the $15 million renovation project is being paid for by a Federal Aviation Administration grant. None of the money is coming from the county’s general fund coffers.

“I like to tell people who may not know a lot about the airport the fact that we operate as an enterprise fund,” Baer said. “So we’re fully self-sustained. We do not take any general fund dollars.”

The main runway has designation 18R/36L derived from the two directions it points. For example, the 18 is the magnet compass reading of 180 degrees rounded off to the nearest 10th of a degree. Airports paint the designations in big numbers on runways.

But the earth’s magnetic field has shifted since the main runway received this designation and the renovation project is proving to be the time for an update. The reborn runway will be named 19R/1L.

“It’s a brand-new surface and it’s also going to have a brand-new name or number on it,” Baer said.

Napa County Airport to rebuild runway that dates from WWII

Built during World War II by the U.S. Army Corps of Engineers, the main runway at the Napa County Airport is still doing its job. But airport …

The Federal Aviation Administration announced Wednesday that airports in Napa, Monterey and Watsonville are among those that will receive gran…

Workers are busy repaving runways this summer at Napa County airport. The World War II-era concrete is being cracked so it can be used as a base for an asphalt surface.

A worker cleans out the joints in the concrete runway at Napa County Airport in preparation for repaving.