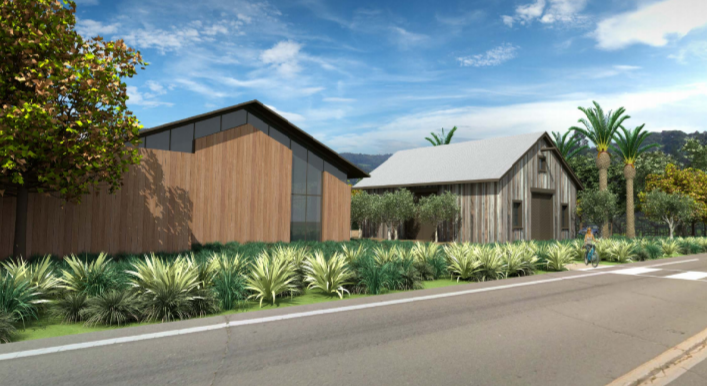 This depiction shows how the Oak Knoll hotel would look from Solano Avenue. The 50-room hotel with a 100-seat restaurant is to be located on commercially zoned property in the agricultural area between the city of Napa and Yountville. 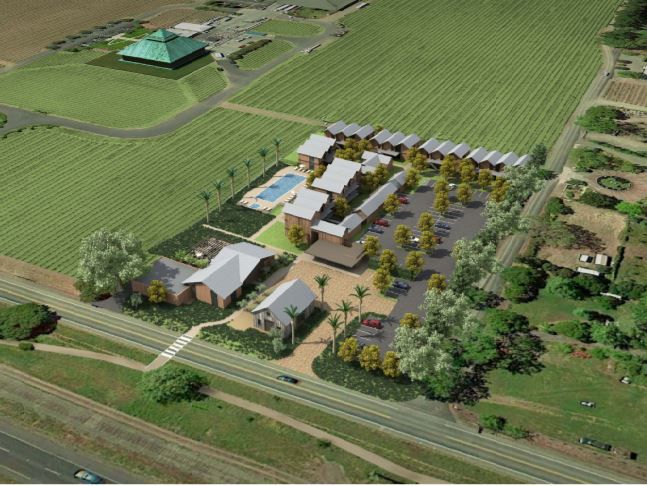 The planned Oak Knoll hotel, depicted here in a rendering, is to be located at the former Red Hen complex along Solano Avenue between the city of Napa and Yountville.

On Wednesday, the Napa County Planning Commission approved the 50-room hotel and 100-seat restaurant. The project site is 3.5 acres at 5091 Solano Ave. between the city of Napa and Yountville, at the former Red Hen complex.

“I think it’s a lovely project and it’s going to be a great improvement over the abandoned property that’s currently there,” Commissioner Joelle Gallagher said.

Oak Knoll hotel would have about 33 employees. With high housing prices, concerns have arisen in local communities about how to house hospitality industry workers who otherwise must commute to the county.

The project would pay a county housing fee of about $313,000. It would be subject to the county’s 1-percent transient occupancy tax for affordable housing. It would have a jobs training program to help residents fill resort jobs.

Chuck Shinnamon of the Napa Housing Coalition said the $313,000, though a lot of money, is a drop in the bucket compared to housing need that would be generated by the new resort. The 1-percent affordable housing transient occupancy tax is about generating money for the future, he said.

“I think you have the ability to say, ‘You know, guys, you have to do better,’” he told the commission.

Gallagher agreed. When the developer offered to triple the $313,000 housing fee, she said she is appreciative but that the move went in the wrong direction.

“My concern isn’t that we don’t have enough money in the pot to be subsidizing,” he said. “It’s that we’re not building housing ... when hotels and other commercial operations step up and actually get the housing built, we get what we need.”

The city of Napa in 2018 required Pacific Hospitality Group to create at least 12 affordable housing units in return for approving a 253-room hotel. That is resulting in a 20-unit modular apartment complex on Old Sonoma Road.

“It absolutely can be done,” Gallagher said.

Two rural neighbors to the Oak Knoll hotel site told the Planning Commission they’d like the project to move forward. Developers worked to address neighbor concerns over the resort after a wave of initial criticisms.

“I have a vision of cleaning up the property and making it nicer than it is,” neighbor Jane Vianello told commissioners.

Commissioners saw merit in such arguments for a project that they in general praised.

“I’m torn as well,” Commissioner Anne Cottrell said, but added that the housing challenge is a “drip, drip, drip, drip” if nothing is done about it.

After huddling 20 minutes or so with county staff, the developers made another proposal. The result was a twist on simply tripling the $313,000 housing fee.

In addition to the housing fee, they would pay double the amount—approximately $626,000—toward a specific affordable housing project that is already planned. The example mentioned was affordable units to be built by nonprofit MidPen Housing at Napa Pipe.

The commission accepted the offer and approved the project by a 3-1 vote, with Gallagher dissenting.

“I’m not looking for additional funding,” she said. “I’m looking at actual housing being built and being creative about ways to do that.”

Oak Knoll hotel will be on a pocket of commercially zoned land in an agricultural area dominated by vineyard, wineries and a few rural neighborhoods. Behind the project are former St. Helena City Councilmember Pitts, St. Helena attorney Brian Russell and Tim Harmon of Palisades Hospitality Group.

Pitts said he doesn’t know when building will begin.

Destruction will come before construction. The site will be wiped clean of the rustic, former Red Hen complex, which featured restaurants and stores in barn-style buildings from the late 1940s until the mid-2000s.

Then the 50-room hotel and 100-seat restaurant are to be built, along with such features as an art gallery. The wood-and-glass exteriors and sloping roofs are meant to create what the project application called “a contemporary approach to an agrarian style.”

Meanwhile, the Red Hen complex will fade further into memory after being a local destination for decades. A March 1959 Napa Register article called it a “familiar Napa Valley landmark.”

Mrs. Lenore Stearns – that’s how the 1959 paper referred to her—in the late 1940s opened an antique store there to sell items she had gathered from her world travels. Her “Little Red Hen” grew to have the House and Garden shop, the Red Hen Fashion Shop and the Red Hen restaurant, the article said.

Since then, the vacant Red Hen complex has become what some neighbors call an eyesore, with deteriorating buildings behind a chain link fence. The Oak Knoll hotel is to be the replacement.

One rural Napa County hotel wrapping up, another on the horizon

Napa County responds to citizen concerns about a 50-room hotel and 100-seat restaurant on Solano Avenue.

Bardessono Hotel & Spa was named Business of the Year by the Yountville Chamber.

Stag's Leap Wine celebrates its golden anniversary in Napa Valley with consumer events across the U.S.

The project is planned for the triangular lot between Dutch Brothers coffee and the Napa Valley Vine Trail/Wine Train property.

This depiction shows how the Oak Knoll hotel would look from Solano Avenue. The 50-room hotel with a 100-seat restaurant is to be located on commercially zoned property in the agricultural area between the city of Napa and Yountville.

The planned Oak Knoll hotel, depicted here in a rendering, is to be located at the former Red Hen complex along Solano Avenue between the city of Napa and Yountville.