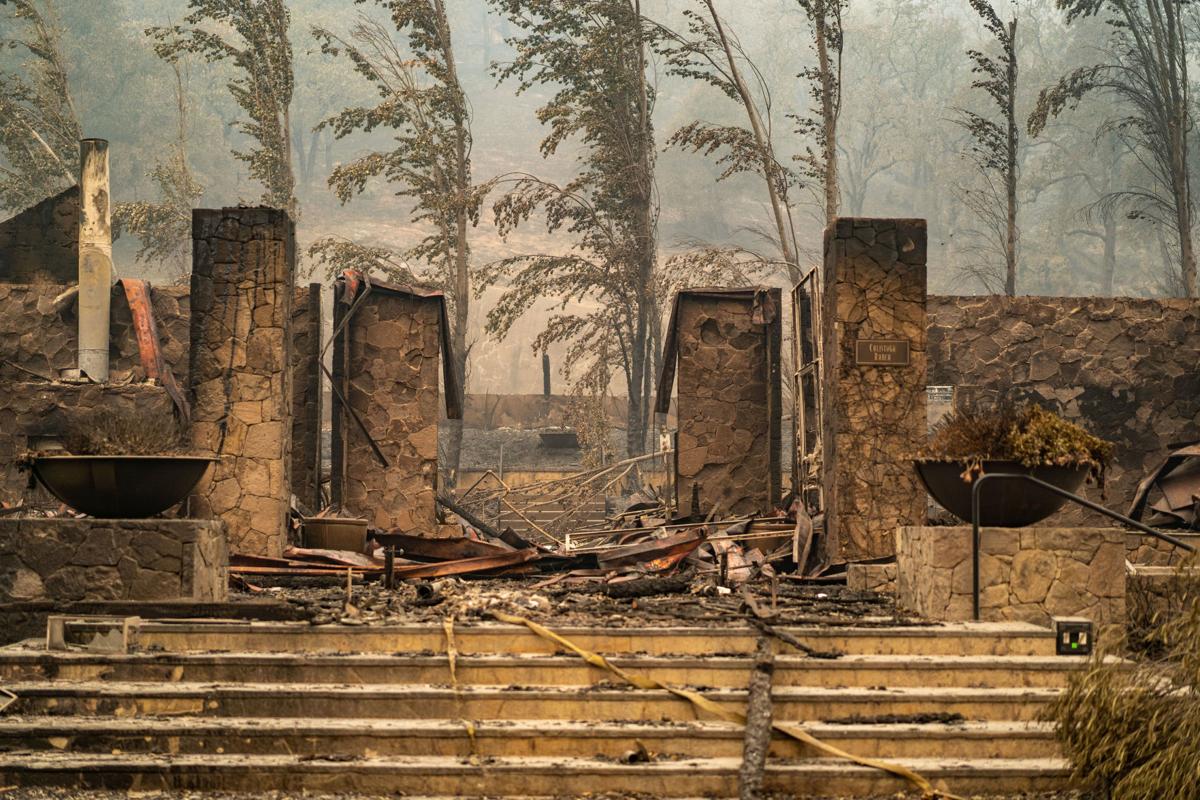 The remains of Calistoga Ranch, a resort that burned in the Glass Fire. The Board of Supervisors heard requests Tuesday to spend $42 million over the next five years to reduce the county's wildfire threat. 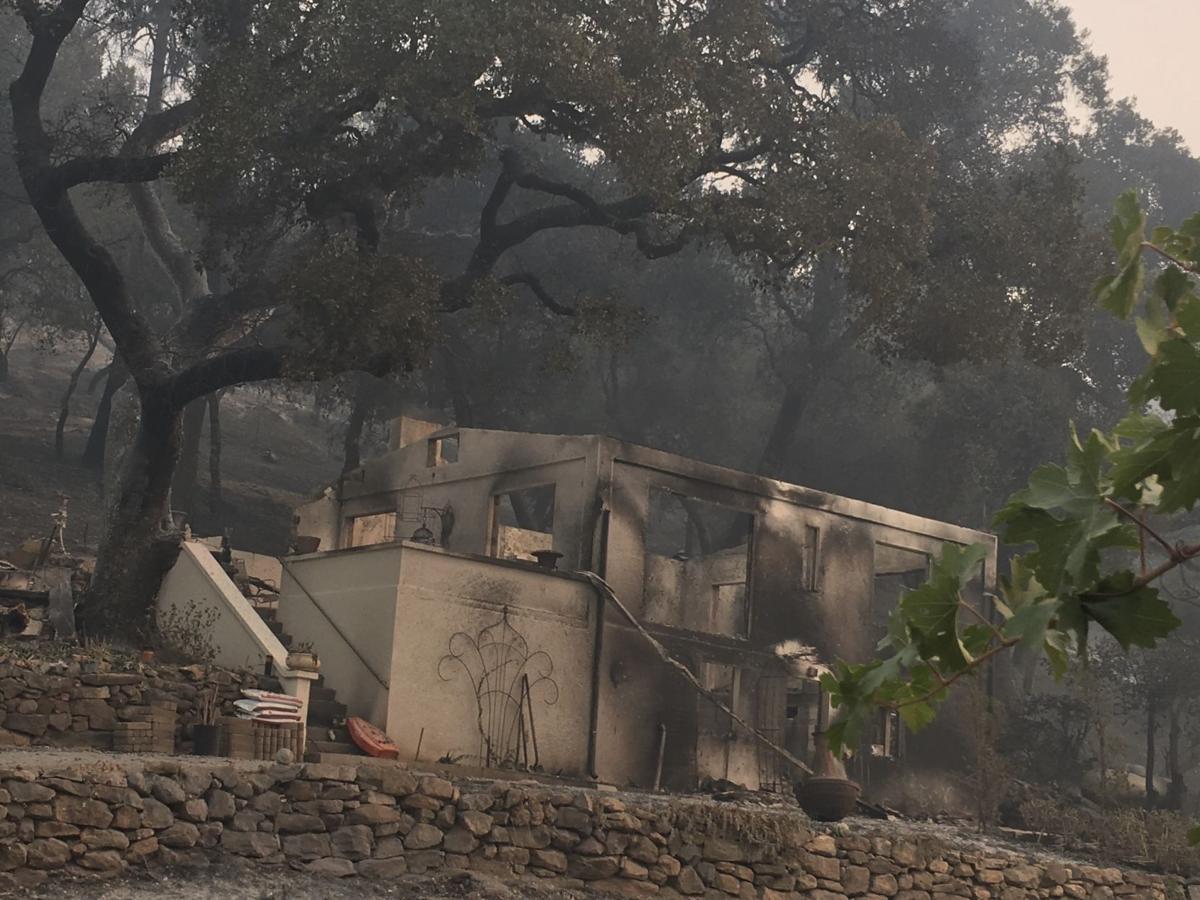 The wreckage of a house on Silverado Trail in the wake of the Glass Fire. The Hennessey and Glass fires in Napa County during 2020 destroyed about 1,000 structures.

Local wildfire prevention advocates want $42 million over five years for fuel reduction and similar projects to prevent a repeat of large fires that in recent years destroyed about 1,500 homes, businesses and other structures.

The county Board of Supervisors on Tuesday held what amounted to a wildfire summit. Wine industry officials and residents implored the county to take further preventative steps before another fire season begins.

“Napa will burn again,” said Christopher Thompson of Napa Communities Firewise Foundation. “We now have a plan of action and we need funding ... and we need lots of it.”

County Fire Chief Geoff Belyea asked for $6.4 million in the short-term. County supervisors responded by agreeing that the county should find the money to make that contribution.

“This is not an option,” Board of Supervisors Chairperson Alfredo Pedroza said. “We always have to spend money after disasters and we spend it in the millions of dollars. This is about spending it proactively … while it’s a bold ask, I think it’s a very appropriate ask.”

The ask is only for a year, with more money needed in coming years for more fuel reduction and to manage existing fuel breaks. Supervisor Ryan Gregory said the county ultimately may have to look at a sustainable money source, whether it be a sales tax, parcel tax or whatever.

Napa Communities Firewise Foundation is a nonprofit that works with 12 community fire safe councils on such projects as vegetation management.

The foundation and Belyea unveiled a $42 million, five-year fuel reduction plan to better protect both rural areas and cities. The challenge will be securing all of that money from the county and through grants.

Studies show that more than one-third of Napa County could burn with flames taller than 20 feet in height, Thompson said.

About $5.4 million in proposed projects for this year includes fuel reduction near the rural communities of Angwin in the hills east of St. Helena, Circle Oaks between the city of Napa and Lake Berryessa and Berryessa Highlands on hills above Lake Berryessa.

Ten million dollars in year-two proposals includes projects close to cities. One is a $250,000 fuel break near the city of Napa from Timberhill Park to Partrick Road above Browns Valley.

Also, a $200,000 fuel break would be created along the eastern boundary of American Canyon. In 2019, a 526-acre wildfire in this area led to residents in nearby subdivisions being evacuated.

Among other proposed projects in the five-year plan are fuel reduction near the Silverado community that had more than 100 homes burn during the 2017 Atlas Fire.

Belyea said much of the work will be “shaded fuel breaks.” Underbrush and some tree branches will be removed and grasses will cut low to create a park-like setting where firefighters can fight fires.

“It will not be a completely denuded swathe of land,” Belyea said.

A county-run fire department could more appropriately address the multitude of concerns that have been brought to the Board of Supervisors by industry and begin to place control with county government, Farm Bureau CEO Ryan Klobas wrote.

Jeff Enos of the Mount Veeder Fire Safe Council wrote that the top concern of 97 property owners in that area west of the city of Napa is vegetation management, followed by evacuation and roadside vegetation clearing.

“Vegetation management often is expensive, dangerous, difficult and requires tools beyond lawn mowers and leaf blowers,” Enos wrote. “Many property owners cannot afford to get this work done and are not able to do the work themselves.”

Vintner Stuart Smith asked supervisors to look at an updated agricultural pass plan for areas during wildfires, such as last year’s Glass Fire.

“If firefighters and the press can access our property during an emergency, then so should we,” he wrote. “We will gladly wave any liability for this access. If we are on our property, we can save it. If we’re not on our property we cannot save it.”

The five-year plan for fire protection projects is based on the recently completed county Community Wildfire Protection Plan. Napa Firewise spearheaded the effort, with help from the Napa County Fire Department, Cal Fire and a variety of county and state agencies and non-profit organizations.

The Napa High football team routed visiting Casa Grande of Petaluma on Friday night, 40-14, bouncing back from a last-second, 14-13 loss at Pe…

A local group is offering to base quick-response firefighting planes in Napa County to help prevent the next big wildfire.

The fire, which forced the evacuation of nearly 200,000 people and destroyed 174 homes, was sparked by the utility's equipment in the mountains northeast of Geyserville.

The tally of vaccine doses administered to county residents and people who work here jumped by 5,412 doses.

Community members plan to raise $1.5 million to base two Fire Boss planes here for an early jump on wildfires.

Patricia Damery thought the verdant forest on her Napa County ranch was a healthy, resilient ecosystem until the 2017 wildfires. This was a wakeup call that her family forest had not been managed for 200 years, since white settlers had arrived and killed or chased away the people who had cared for their land for millennia

A better use for "leftover" campaign funds

Letters: Supervisors should donate it to the food bank.

The remains of Calistoga Ranch, a resort that burned in the Glass Fire. The Board of Supervisors heard requests Tuesday to spend $42 million over the next five years to reduce the county's wildfire threat.

The wreckage of a house on Silverado Trail in the wake of the Glass Fire. The Hennessey and Glass fires in Napa County during 2020 destroyed about 1,000 structures.