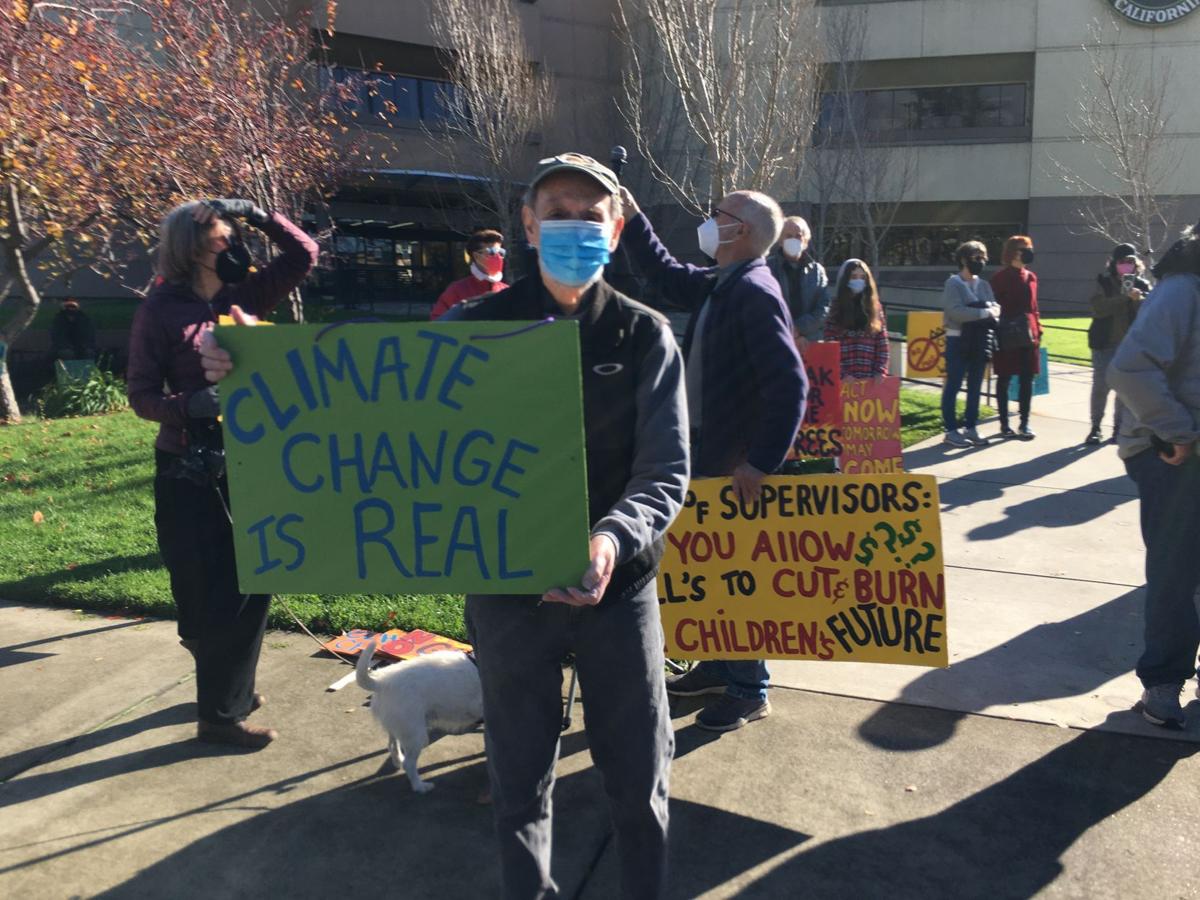 The proposed Walt Ranch vineyards in the mountains between the city of Napa and Lake Berryessa has generated controversy over the years and sparked this demonstration on Tuesday in front of the county administration building. 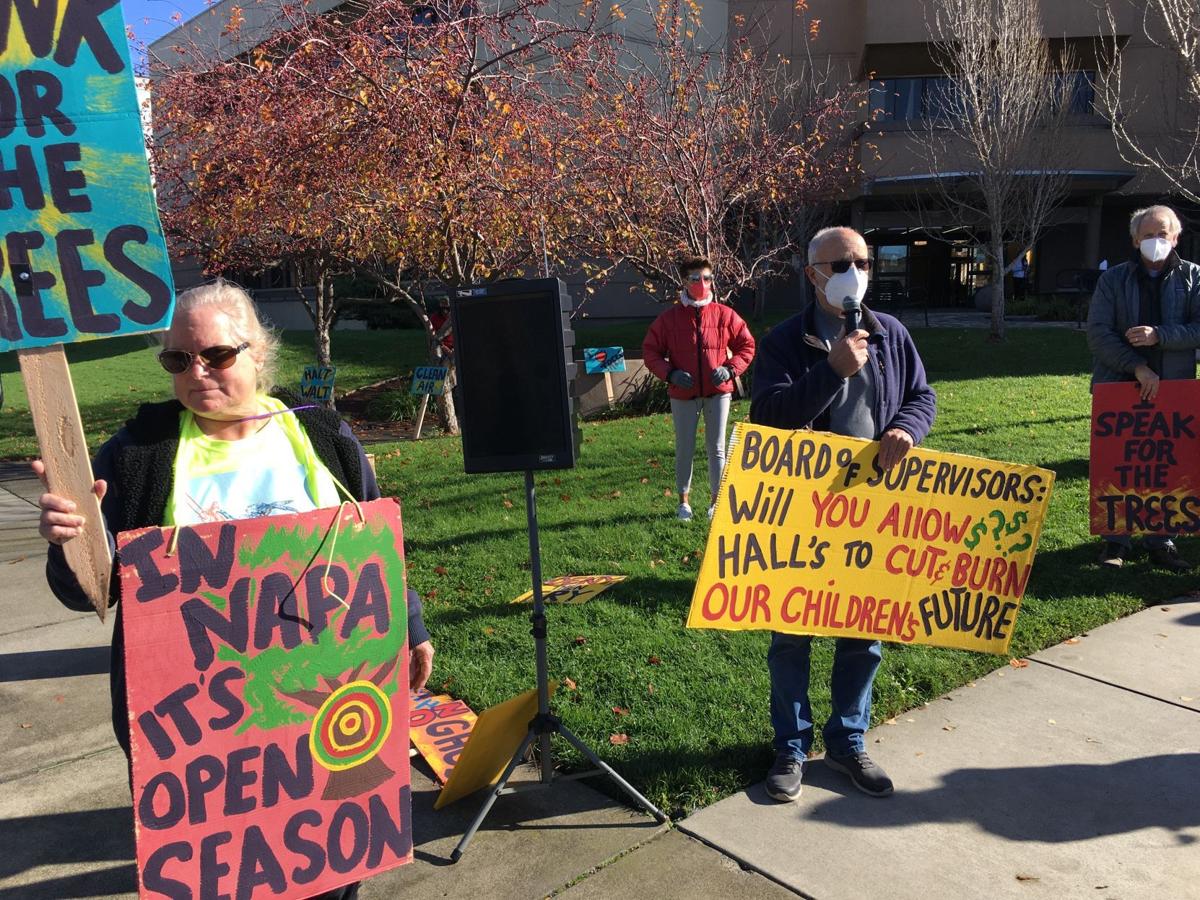 A few dozen people protested the Walt Ranch vineyard project prior to the issue being addressed by the Napa County Board of Supervisors on Tuesday.

A divided Napa County Board of Supervisors decided the controversial Walt Ranch vineyard project found an acceptable way to address greenhouse gas concerns related to the expected loss of 14,000 trees.

Walt Ranch plans to make up for the loss of carbon-sequestering trees by preserving 124 acres of woodlands and planting about 17,000 trees. The Board of Supervisors on Tuesday endorsed the idea by a 3-2 vote, with a final vote to come on Feb. 8.

The hybrid approach of conservation and tree planting is appropriate, Board of Supervisors Chairperson Alfredo Pedroza said.

But the decision had detractors. A few dozen people before the session protested the Walt Ranch project outside the county administration building, holdings signs with such messages as, "I speak for the trees."

Center for Biological Diversity appealed the Walt Ranch greenhouse gas issue to the Board of Supervisors. Ross Middlemiss of the group said the mitigations proposed by Walt Ranch and approved by county staff weren't good enough.

“We brought this appeal because we are in a climate crisis, and the county has a legal and moral obligation to mitigate the destructive projects it approves," he said.

Attorney Whitman Manley on behalf of Hall Brambletree Associates, the Walt Ranch applicant, had another view. Walt Ranch will not only provide sufficient mitigation, "but overwhelming mitigation," he said.

This is the latest chapter in what is probably Napa County's longest-running, most controversial proposed vineyard project ever.

The Walt Ranch project involves grading 316 acres for a 209-acre vineyard and related needs on 2,300 acres in mountains between the city of Napa and Lake Berryessa. Craig and Kathryn Hall of HALL Wines bought the property for vineyards for $8 million in 2005, according to newspaper reports from the time.

As early as 2009, the California Oak Foundation expressed concern about the proposed loss of trees at Walt Ranch to make room for vineyards. By 2014, dozens of people were showing up at county hearings saying the project shouldn't be allowed in the county's watersheds.

The Board of Supervisors approved the vineyards in 2016 and opponents sued. The courts upheld the county on issues such as groundwater availability and rare species protection, but said the greenhouse gas issue related to expected tree loss needed more work.

“The task actually before the Board today is rather narrow,” Deputy County Counsel Jason Dooley told supervisors on Tuesday.

Walt Ranch's tree loss mitigation must cover for 27,528 metric tons of carbon dioxide. For supervisors, it was partly a matter of math.

Hall Brambletree Associates originally proposed to preserve 248 acres of woodlands at Walt Ranch from development through conservation easements. But the courts ruled that it's unclear whether all of this land has development potential.

That led to the proposal before the Board of Supervisors on Tuesday of preserving 124 acres and planting 16,790 trees.

Middlemiss said the planting program is flawed and questioned the expected 80% survival rate. He said Hall Brambletree Associates should find 248 acres to preserve on the property that can't otherwise be developed.

“Sometimes the most obvious option is also the best," he said.

Walt Ranch burned during both the 2017 Atlas Fire and 2020 LNU Lightning Complex Fire, said Mike Reynolds on behalf of Hall Brambletree Associates. Of the 235,710 trees on the property, between 80,000 to 100,000 are unlikely to survive.

Given that, Walt Ranch is a good location for tree planting. If 80% of the planted trees don't survive for seven years, Walt Ranch must plant more trees, the applicants said.

But Middlemiss said that a lot can happen to young trees.

"Eighty percent survival rate — I acknowledge and I’m sure the applicant will try their best," Middlemiss responded. "I believe them when they say they are committed to replanting for seven years. What happens after seven years?”

Walt Ranch has not demonstrated that it cannot preserve 248 acres of woodlands that otherwise could be developed, he said. Instead, the applicants have jumped "to a speculative planting program."

Reynolds said there will also be other conservation easements for other reasons on Walt Ranch. All together, more than 1,000 acres will preserved and most have oak woodlands.

The Board of Supervisors heard from 16 speakers during public comments, all of them opposing Walt Ranch. Several speakers spoke about the dangers of climate change, with one argument being newly planted oaks won't yield immediate carbon-sequestration benefits.

“We don’t have time to be cutting down trees anymore, I’m sorry,” resident Amber Manfree said.

Supervisor Diane Dillon opposed the mitigation proposal. She wanted to uphold the appeal and send the matter back to staff for more work.

Supervisor Belia Ramos asked that 568 more trees be planted than the 16,790 proposed and Hall Brambletree Associates agreed. She wanted the 80-percent survival rate requirement to cover for all 14,000 or so trees to be removed.

"If you are a resident of the county, if you live in (neighboring) Circle Oaks, your loss is not measured in metric tons of carbon dioxide," Ramos said. "Your loss, what you feel — what I have heard — is measured in the trees you don't see."

Supervisors Gregory, Pedroza and Ramos voted in favor of the Walt Ranch mitigations and to deny the appeal. Supervisors Dillon and Brad Wagenknecht voted "no."

Berryessa Highlands is a small, rural community near Lake Berryessa that lost a third of its homes to the 2020 Hennessey Fire. The community f…

Workers in 2021 reconfigured the Highway 12/Interstate 80 ramp to try to end some of the region's biggest traffic backups.

It's a jolt to old-timers when their Napa subdivision has two homes sell for a million dollars.

Napa County is a amid a deep drought, even as Lake Curry reservoir in a remote corner sits unused. Why?

Over the last 20 years, members of the Pierce’s Disease, Glassy Winged Sharpshooter Board have been working to allocate funds for relevant research projects, all focused on mitigating the risk in California’s grape growing regions.

WATCH NOW: Bruce Miller sits down to talk with Oscar nominee Diane Warren about her success

Blinken: No concessions to Russia on Ukraine

Blinken: No concessions to Russia on Ukraine

The proposed Walt Ranch vineyards in the mountains between the city of Napa and Lake Berryessa has generated controversy over the years and sparked this demonstration on Tuesday in front of the county administration building.

A few dozen people protested the Walt Ranch vineyard project prior to the issue being addressed by the Napa County Board of Supervisors on Tuesday.