The Napa County sheriff’s deputy who fatally shot a shotgun-wielding man in April will not be charged criminally, District Attorney Allison Haley has decided.

“The use of deadly force by Deputy (Gregg) Lee was a reasonable and lawful response under the totality of the circumstances,” the DA’s office announced in a statement released late Thursday afternoon. “Therefore, the actions were legally justified and criminal charges against him are neither warranted nor supported by the evidence.”

On April 24, 2020, 24-year-old Brandan Nylander was fatally shot after a brief vehicle pursuit that ended at a dead end road on the outskirts of the Napa County Airport. Video released by the Sheriff’s Office showed Nylander emerging from the vehicle holding the weapon in both hands. He switched to holding the gun with one hand, like a stick, and moved toward the front of the vehicle, away from the pursuing officer, a move the officer apparently interpreted as a possible effort to seek cover. 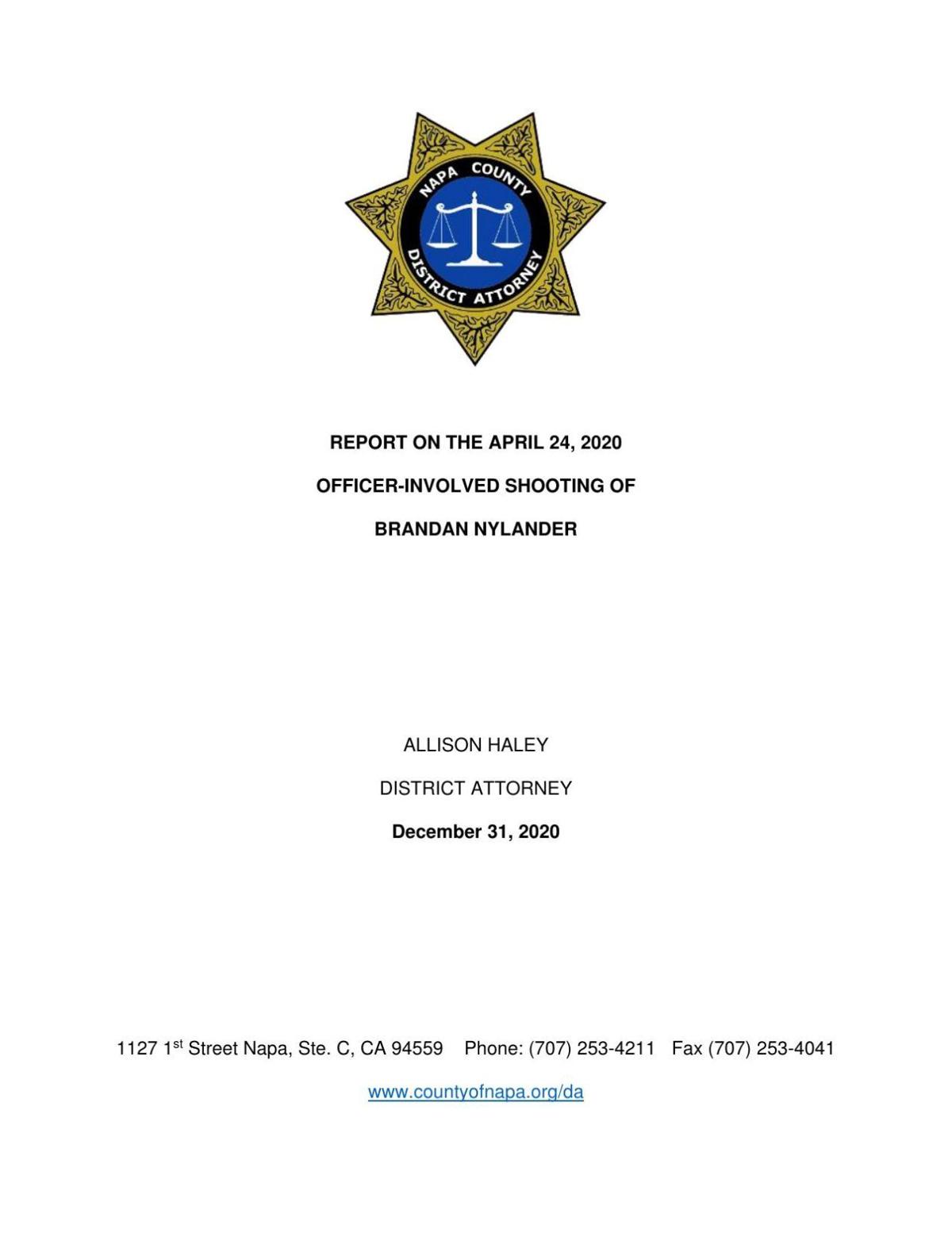 “Outgunned and fearing for his life, Deputy Lee shot four times until Mr. Nylander went to the ground,” the DA statement said.

Nylander was struck in the neck and buttocks and died at the scene. Two other shots fired by Lee missed the man.

Earlier in the day, according to Napa Police, Nylander had entered the Walmart on Lincoln Avenue and used a hammer to break open a display case. He took a box of shotgun ammunition and threw the hammer at an employee before fleeing the scene.

Warning, this video contains graphic content This is video of an Officer Involved Shooting that occurred on April 24th, 2020 in Napa. The robb…

The DA’s report says Nylander was depressed and had been suffering from suicidal thoughts. A suicide note was later found in his home. He was intoxicated at the time of the shooting.

Nylander’s family has been critical of the deputy’s actions and has filed a letter with the county signaling their intent to sue over his death.

“If anything, Brandan appeared to be attempting to comply with the deputies’ presumed commands to raise his hands and put his back (to them),” lawyers for the family wrote of the video released by the sheriff’s office.

The video, taken from Lee’s patrol car, did not capture any audio, but Lee and officers who arrived as the incident was unfolding said the man did not speak during the encounter.

The DA’s report dismisses the family’s contention that the video, taken from some distance from where Lee was standing, shows Nylander preparing to surrender.

“While certainly useful in documenting some of the events of the incident, the dash cam video does not provide the observer with the deputy’s view of the events nor was it positioned in the same place as the deputy so as to be used as a substitute for what the deputy perceived,” the report says.

WATCH NOW; A YEAR IN VIDEOS—A LOOK BACK AT SOME OF NAPA COUNTY’S MOST MEMORABLE STORIES.

The year in videos: A look at some of Napa County's most memorable stories

Here is what Calistoga looked like after the town was evacuated in September.

Inside "The Bowl": A look at a south Napa homeless camp

One of Napa's largest homeless camps is located just steps from the animal shelter, river trail and OLE Health parking lot. Take a step inside.

A Napa first day of school like no other

The teachers were there. The students were (mostly) ready. But was a first day of school like no other in August, 2020.

Napa sisters Carol Frommelt and Gail Randol pick up trash while they walk the Napa River trail, nearly every other day. They've been doing thi…

Surveying the damage: Burned out Berryessa residents return to homes turned to rubble

Assessing the damage of the Hennessey Fire on Aug. 24 at the communities around Lake Berryessa.

Law enforcement used a small drone to explore the apartment where possible gunfire had been heard.

Public safety officers reported flames coming from the rear of the house.