Christopher Thompson exited his Deer Park house at 3:50 a.m. on Sept. 27 and saw a fiery scene he had long imagined with dread — and had hoped to help prevent.

“When I stepped out of my house on the porch and saw those flames leaping from Bell Canyon reservoir (area), I knew my worst nightmare had come to fruition,” Thompson said.

The Deer Park firefighter and president of Napa Communities Firewise Foundation had worked unsuccessfully to obtain a $750,000 grant from Cal Fire for fuel management in Bell Canyon. He’d wanted to thin out vegetation and improve legacy roads there.

He won’t say the Bell Canyon work he’d sought would have stopped the wind-driven Glass Fire that fateful night. But it would have helped firefighters make a stronger stand, he said. It’s a “what if” he doesn’t want to see repeated.

Never again — that’s the growing cry after the disastrous 2020 and 2017 fire seasons saw half of Napa County burn and more than 1,500 homes and businesses destroyed. Thompson’s is among the loudest voices.

“I’ve been telling everybody this is an existential crossroads we’re at in the county,” Thompson said recently. “We need to start making some big decisions.”

Big decisions could be at hand as Napa County strives to put recent, mega-destructive blazes on the ash heap of its history. A renewed fire protection push should take shape in county meeting rooms before the 2021 fire season.

The outcome is unclear. But the chorus of voices wanting something to happen is loud and clear.

“The severity of this year’s fires clearly demonstrates the clear need for innovative, new ways to prevent fires,” Michelle Benvenuto of Winegrowers of Napa County recently told the county Board of Supervisors.

“If we do not unify prevention efforts in the county and make changes to how we manage fuel loads and fire lines, we could continue to face this level of fire severity every year …” Williams said.

Stu Williams lives on the front lines of fire country in Berryessa Highlands. His home survived the Hennessey Fire, though about 93 of the rural community’s 350 or so homes burned.

The Highlands, located in the hills above the massive Lake Berryessa reservoir, is supposed to provide a view of water, not wildfires.

“One of the things I’d really like to see here is a manned firehouse,” said Williams, who helped save his home by spraying water onto his roof using his own fire hose.

About 73% of Napa County is within a state designated fire hazard zone. But even the cities outside of these zones aren’t immune from the threat. Calistoga evacuated because of the Tubbs Fire in 2017 and Glass Fire in 2020 and the northwest city of Napa faced evacuation jitters with the Nuns Fire in 2017.

Huge, mega-destructive fires in Napa County suddenly no longer seem to be a once-in-a-generation occurrence.

After the Atlas Fire of 1981, Napa County went 36 years without another history-making blaze destroying homes by the dozens. Late summer and early autumn was the time when tourist flocked here for the good life, not to flee for their lives.

Then wildfires vaulted to the forefront with the Atlas, Tubbs and Nuns fires of October 2017 and the Glass and Hennessey fires of 2020. Either this is a fluky run of megafires or a new normal amid a changing climate.

“Basically, the North Bay is becoming Southern California,” he said in an email. “It has been happening for some time, but now the fire problem has also made the geographic jump.”

A lot of houses and power lines scattered through highly flammable wildlands equals lots of ignitions and fires, lots of burned homes, lots of fatalities and lots of vegetation change, especially shrublands turning into degraded weed fields, he said.

Napa County isn’t starting from a scratch in its resolve to further protect itself from wildfires. A backbone already exists — the county’s Firewise system.

Fire safe councils are citizens coming up with plans for their own communities. Steps always include encouraging property owners to follow state law and create at least 100 feet of defensible space around structures by removing nearby brush and fuels.

These councils also achieve bigger fuel reduction efforts using grants from such sources as the state and Pacific Gas and Electric. The Firewise Foundation and its councils over three years raised more than $2.8 million.

Recent years saw the creation of a 3.5-mile fuel break at the remote, rural Berryessa Estates community in the northeast county. A fuel break was created in forests near Angwin in the mountains east of St. Helena. And those are only a few examples.

But Firewise and the fire safety councils can’t do the entire job. Thompson last June told the Napa County Board of Supervisors that only 2% of the areas in real need of fuel mitigation work had been treated.

Thompson moved to Deer Park in 2015 and went to the fire station to find out how to make his property more fire resistant. The fire chief encouraged him to become a volunteer firefighter.

As a result, the self-employed consultant and electrical engineer went through the required training and joined the Deer Park station. He started working with Napa Communities Firewise Foundation. He saw the massive Tubbs, Atlas and Nuns fires that ravaged Napa County in 2017.

“That was sort of my introduction into large, wind-driven fires in the valley,” he said.

Doing fuel management work in Bell Canyon became his “passion project,” Thompson said. He described the canyon as “a place that time forgot,” with a conifer forest that hadn’t burned in a century.

But he wasn’t able to bring the project about before the Glass Fire broke out near Bell Canyon on Sept. 27.

He described how the Glass Fire spread from the Bell Canyon area to the hairpin turn area of Deer Park and moved south with a vengeance. Firefighters had to back away from this monster. Embers rained down on Deer Park, where dozens of homes burned.

“It was like a snowstorm of red-hot embers,” Thompson said. “That is where a lot of the damage occurred.”

His Deer Park house with defensible space survived. A battalion chief from Riverside protected it and left a business card inside. Five neighboring homes without defensible space burned, Thompson said.

Thompson comes across as a man on a mission who can easily talk about fire prevention for over an hour with no need for prompting. He is trying to convince others to join the cause with fervor.

He sees ways the county can make wildfire destruction on the scale of 2017 and 2020 a memory, not a harbinger of worst disasters to come.

Images as the Glass Fire raced across Napa Valley

Of the 20 most destructive wildfires in California history, 12 have burned since 2017. Of those fires, five burned at least in part in Napa Co…

Rates will go up by double digits for rural homeowners starting Jan. 1.

A program that incentivizes homeowners to mitigate wildfire risk through insurance discounts would be a win-win for insurers and consumers. Creating one is the hard part.

Destined to Burn is a collaborative story package by journalists from USA TODAY Network-California, McClatchy, Media News and The Associated P…

Destined to Burn is a collaborative story package by journalists from USA TODAY Network-California, McClatchy, Media News and The Associated P…

Sheltering in place during a wildfire a dicey strategy

In many cases, only luck determines whether a temporary refuge ends up being scorched by a fast-moving, powerful and unpredictable wildfire. The safest alternative? Evacuate and do it early, experts say.

A new USA TODAY Network-California analysis reveals the extent to which a fundamental problem in Paradise —too few escape lanes for too many people in vehicles— applies to other cities and neighborhoods at great risk of wildfire across the state.

What you can do to prepare yourself for wildfire evacuation

Concerned for your own and your family's safety in a wildfire evacuation?  Here are 10 things you can do to prepare now.

The family called 911 while evacuating their home, Napa Fire reported.

Wildfires threaten the bread and butter of Napa Valley: tourism and wine production. What now?

The prospect of major wildfires each fall is a terrifying prospect for Napa Valley's wine industry.

After several close calls, Napa County's cities face up to their wildfire risk

Napa County desperate for wildfire fixes before next fire season

Three firefighters from the Calistoga Fire Department have traveled to Southern California to lend their assistance and serve on a Covid Strike Team.

A local group is offering to base quick-response firefighting planes in Napa County to help prevent the next big wildfire.

A 200-foot-wide shaded fire break is intended to promote forest health and reduce the chance of catastrophic wildfires. 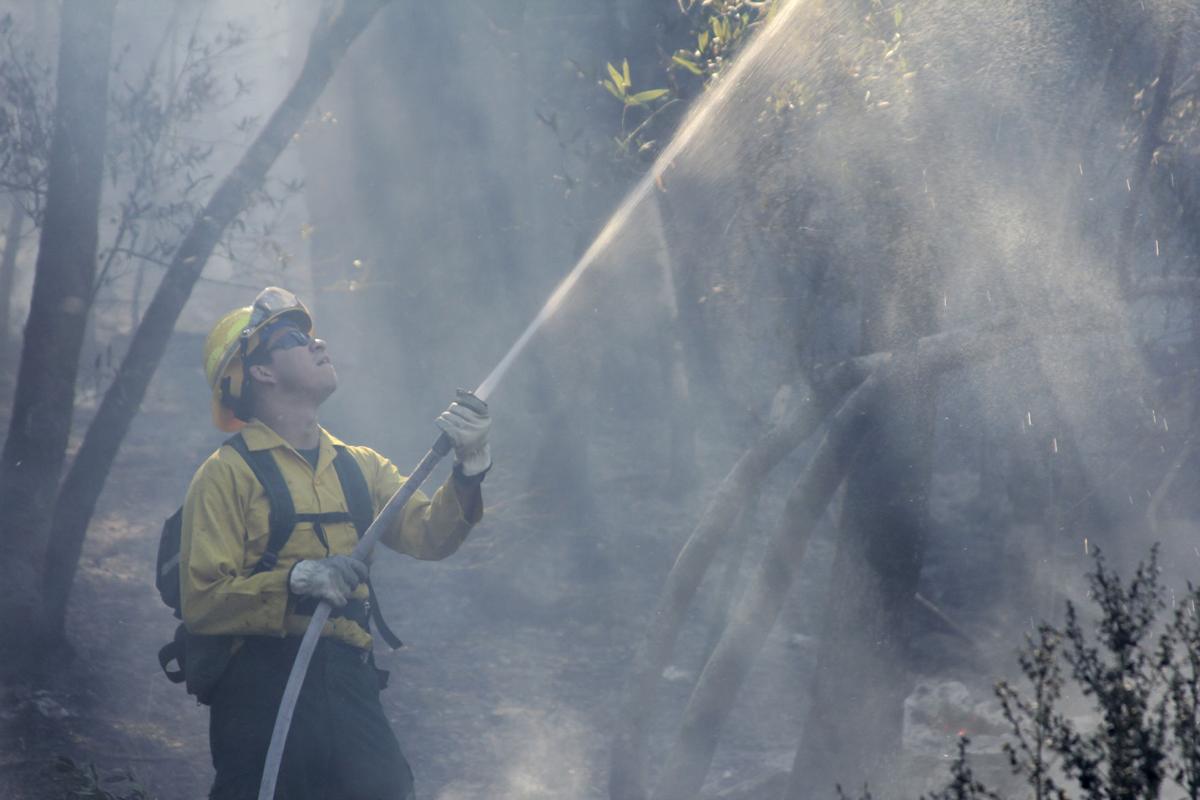 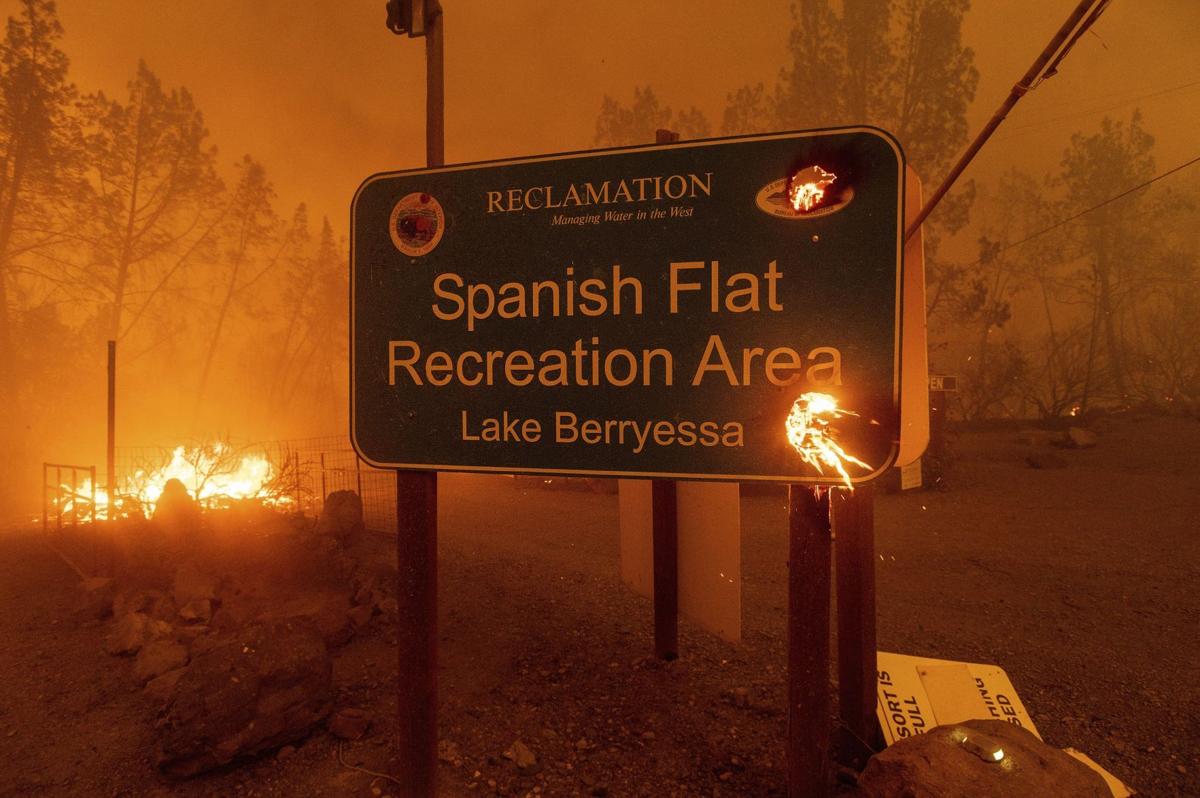 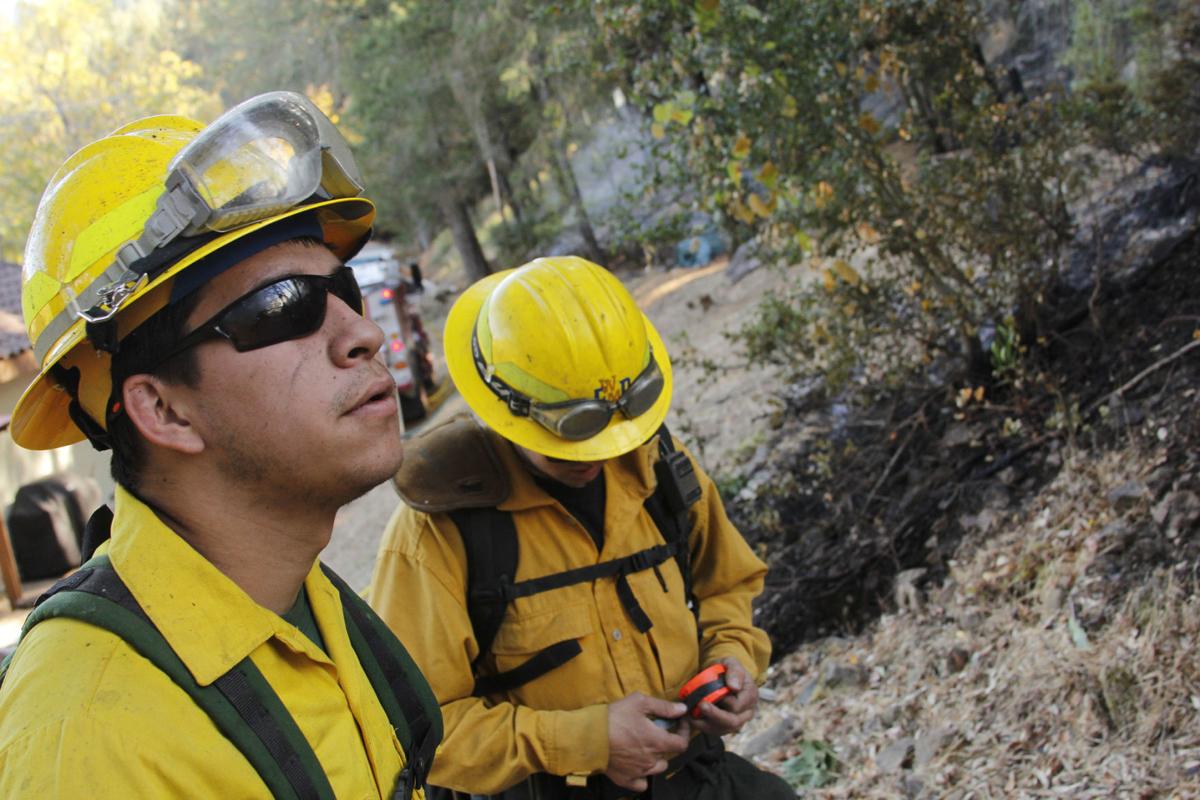 Volunteer firefighter Noah Barela, 19, and firefighter Brandon Bain, 20, both of Arizona, stand by as Fire Chief Jerry McGraw uses a chainsaw to cut down fire-weakened trees in a fire zone on the 5000 block of Dry Creek Road during the Nuns Fire, October 2017. 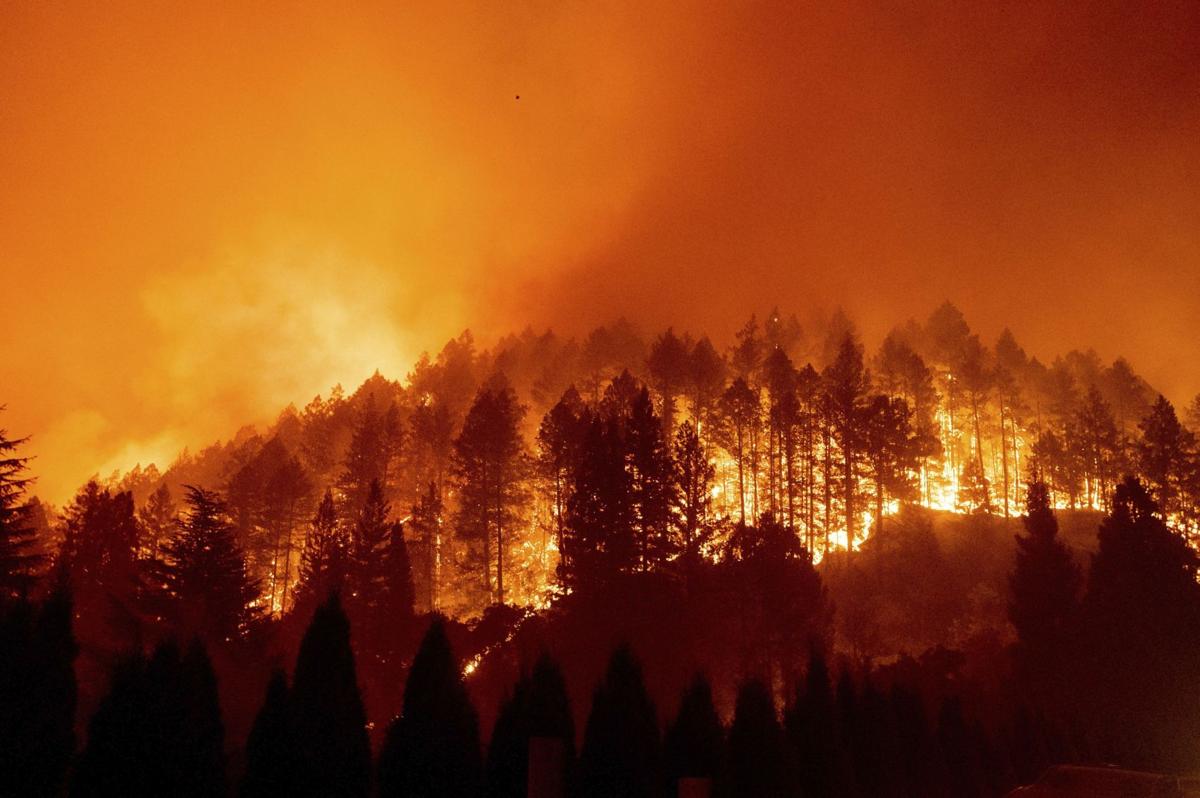 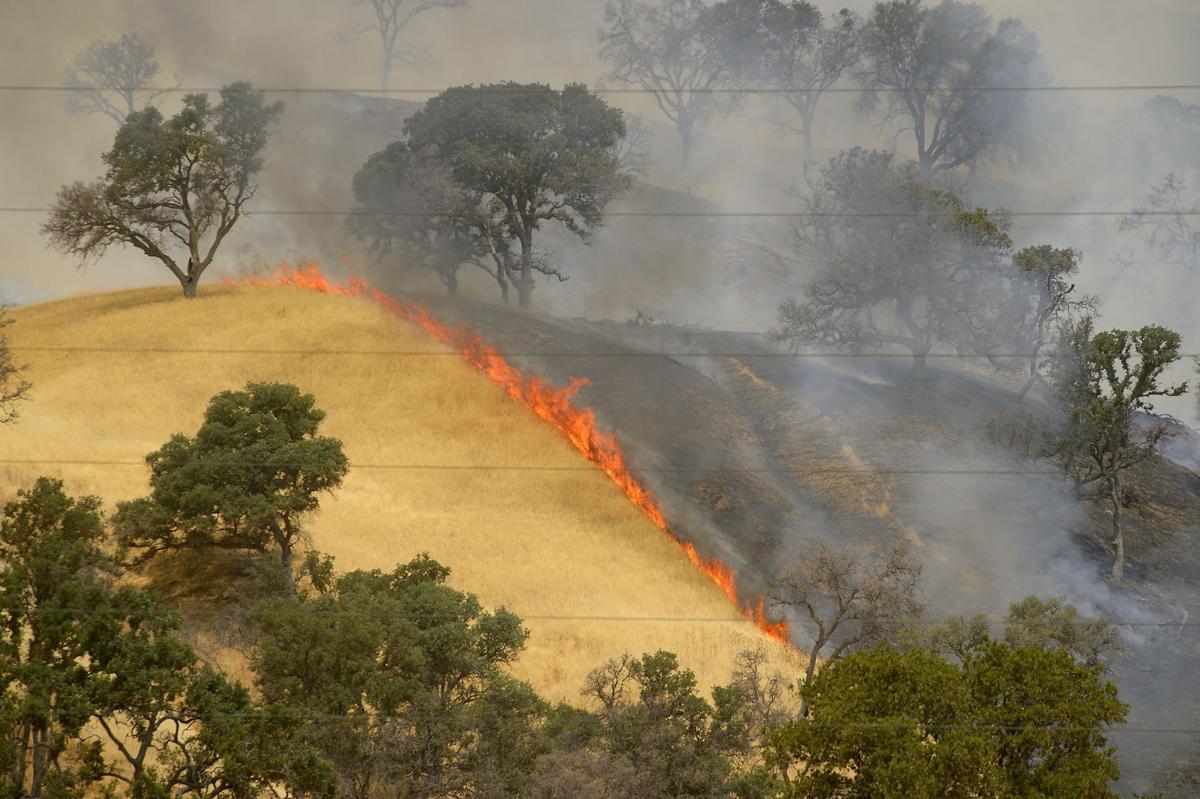 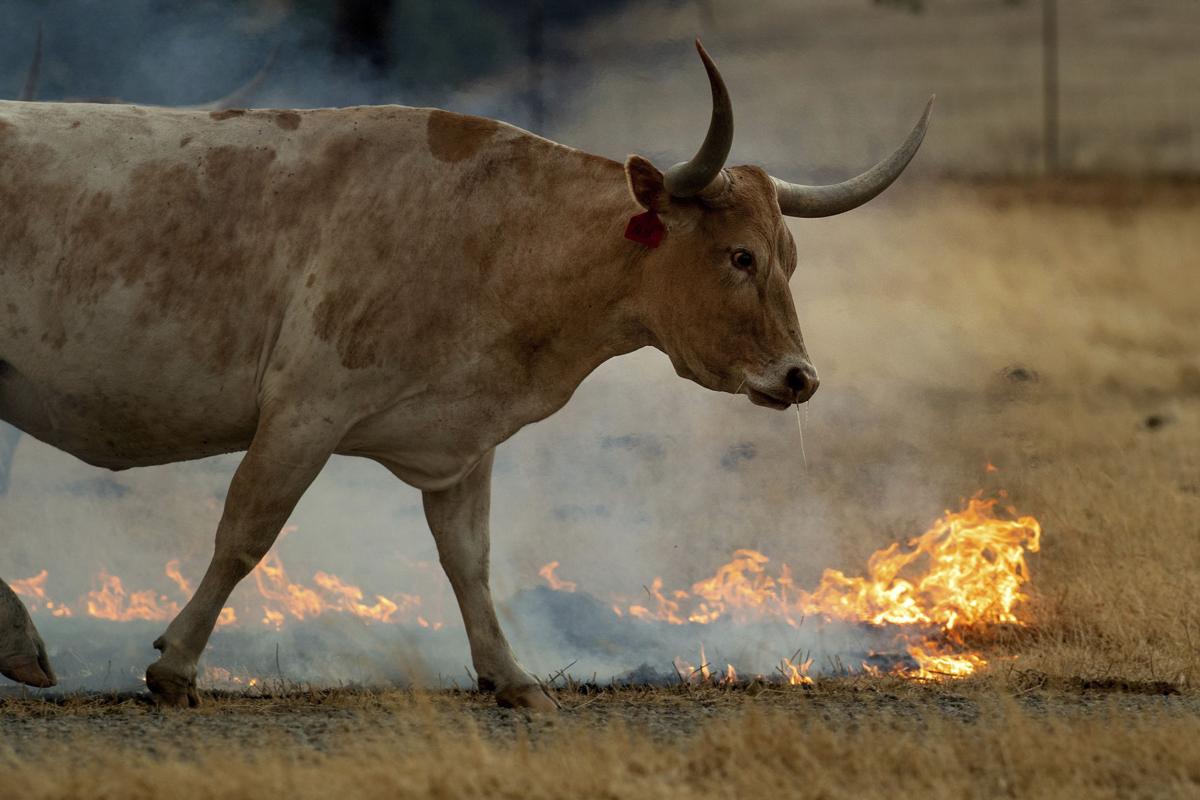 A wildfire burns grasses at a livestock ranch in Guinda, Calif., Sunday July 1, 2018. Evacuations were ordered as dry, hot winds fueled a wildfire burning out of control Sunday in rural Northern California, sending a stream of smoke some 75 miles (120 kilometers) south into the San Francisco Bay Area. (AP Photo/Noah Berger)