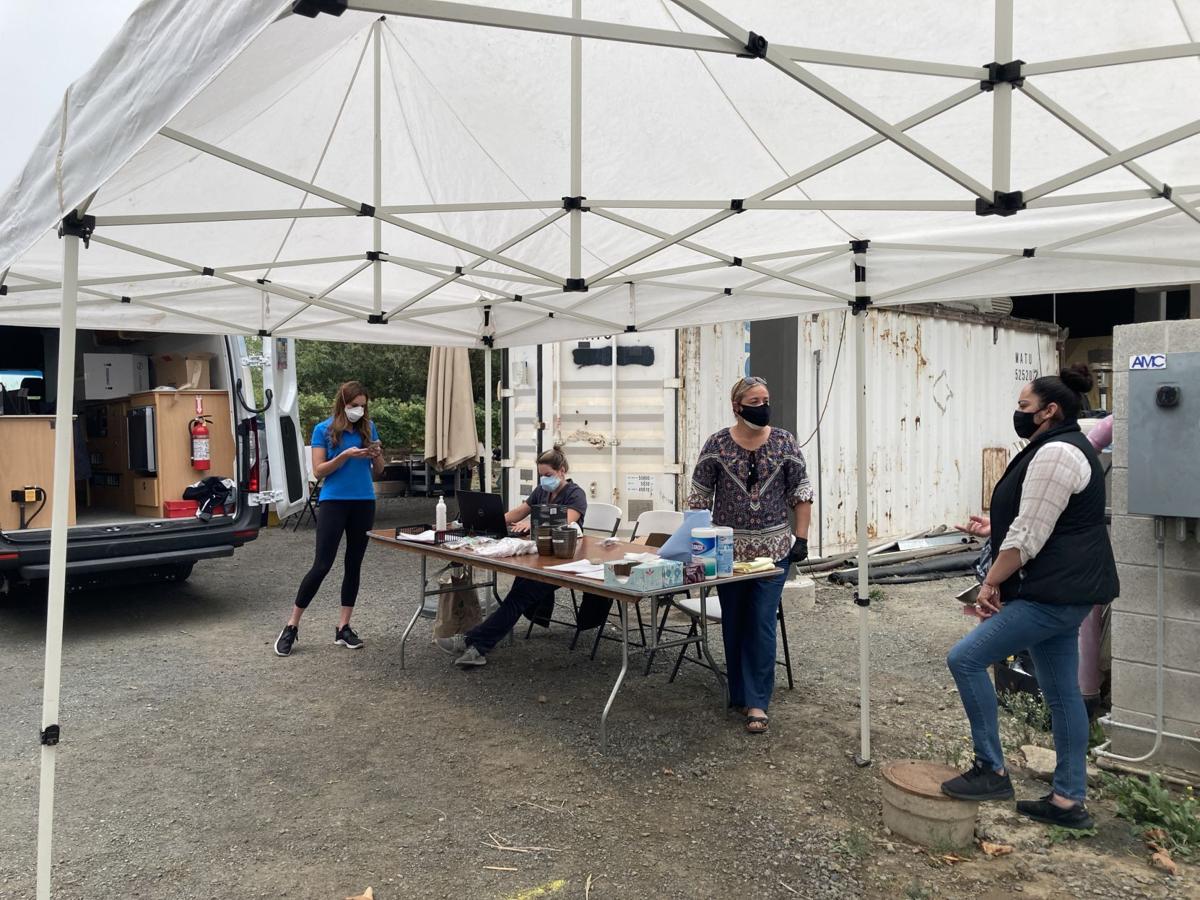 Staff sets up the mobile testing site on Sept. 8 at Alpha Omega Winery, which, like the majority of the hospital's partners, are conducting employee-wide testing every other week. 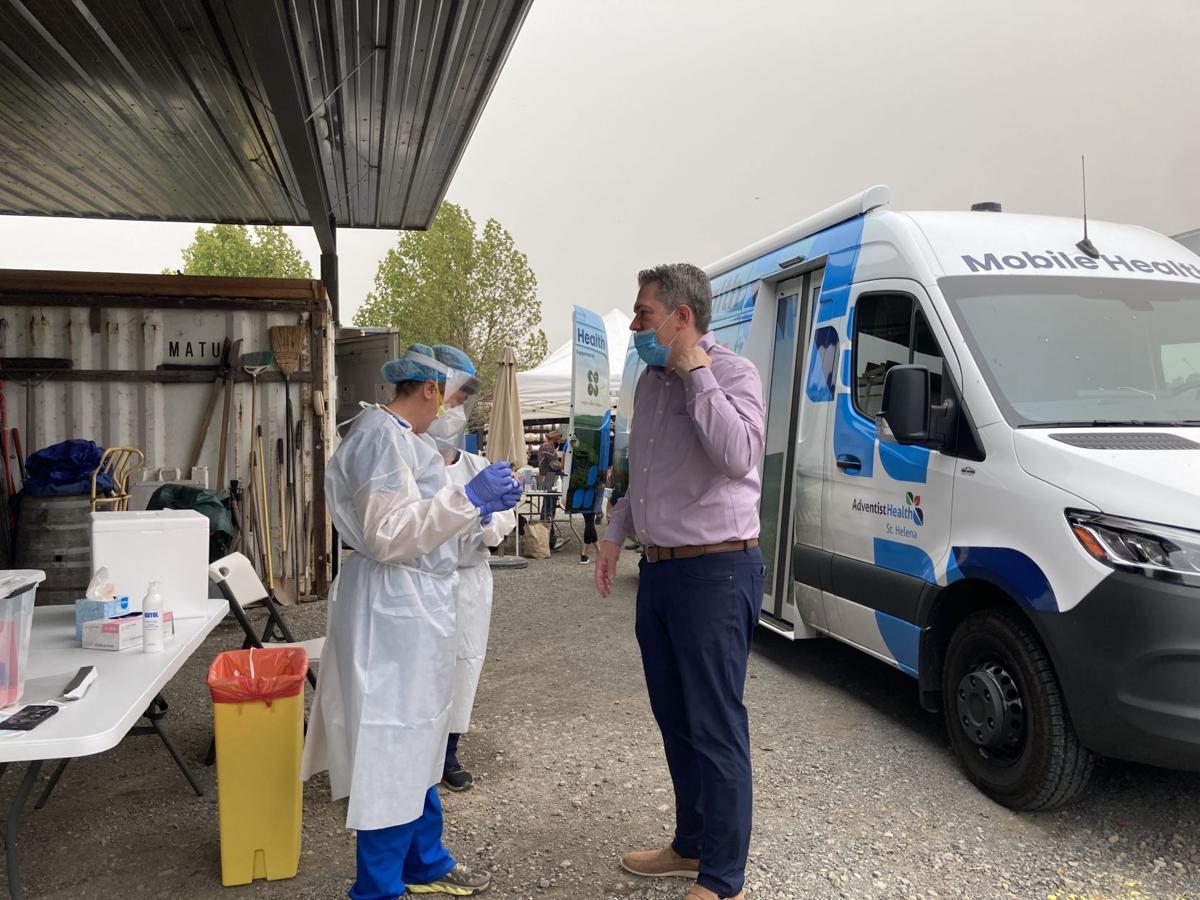 St. Helena Hospital Foundation President & CEO Glen Newhart readies himself for a swabbing as part of the mobile unit's testing on Sept. 8. The unit has worked collaboratively with Napa County to bolster testing availability up valley. 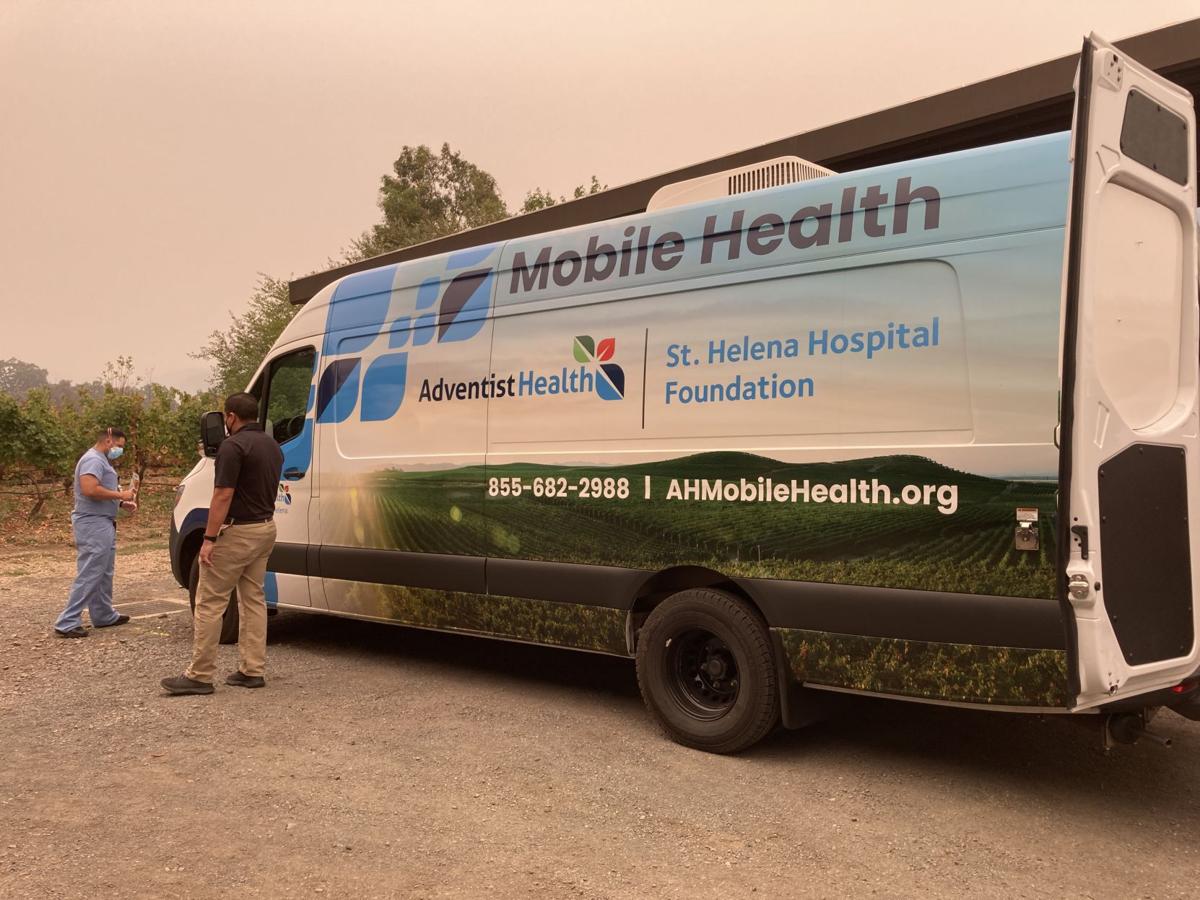 On-site staff engages with an Alpha Omega employee while the employee waits to be tested for COVID-19 at St. Helena Hospital's mobile testing unit on Sept. 8. The unit has run almost 2,500 tests, according to Newhart.

Much has happened in the six months since Napa County reported its first confirmed case of COVID-19.

The county has weathered testing shortages, laboratory backlogs and fluid guidance at the state level – but things have also changed for the better, officials say. County-wide testing has become a collaborative effort between local government and area health providers; testing and contract tracing have become markedly more efficient.

“We have a battle rhythm, so to say, with our EOC (emergency operations center)… so we kind of know what the routine is,” county Public Health Officer Dr. Karen Relucio said of the county’s improvement with testing. “I can say that since the beginning we’ve had our response improve.”

In late May, the county in collaboration with the emergency response non-profit CORE and Verily, the healthcare arm of Google’s parent company, opened up drive-through testing at the Napa Valley Expo. That site dramatically increased testing capacity, allowing the county a better sense of the virus’s spread in Napa Valley.

Even as that site has remained open and expanded into Upvalley, additional testing efforts have sprung up across private companies and healthcare providers in the valley, including St. Helena Hospital, which in late July began deploying a mobile testing unit with the mission of aiding agricultural employers in Napa Valley. The unit has since tested almost 2,500 people, according to St. Helena Hospital Foundation President and CEO Glen Newhart – about 5% of the total tests run in Napa County.

Collaborative efforts such as St. Helena Hospital’s have helped to fill gaps in testing for the county. St. Joseph’s Health and Ole Health have also engaged in testing efforts, according to Relucio, and there are a number of area pharmacies that are conducting tests independent of local government efforts.

“It’s health care organizations and community members stepping up to make sure there’s adequate testing for patients and industries that are part of critical infrastructure,” she said.

The efforts of those partners mean the county can turn its attention back to initiatives delayed by the pandemic, including child care services, services for mothers with young children, programs for children with disabilities and its regular immunization program.

State and local health officials have only recently begun to discuss planning for mass vaccination efforts, Relucio said, for which the county expects it will have to divert existing resources and staff.

“We’ve been meeting with the state and are beginning to alter our operations so that staff on testing operations can concentrate on (future) vaccination (efforts),” Relucio said.

Napa County has as of Thursday afternoon reported more than 51,600 tests; the true number may be higher, according to Relucio, who explained that private companies do not necessarily report their completed negative tests. There have been 1,532 confirmed cases of the virus; as of Thursday afternoon, 325 of those cases remain active.

St. Helena Hospital’s mobile testing unit has partnered with almost 30 agricultural employers (the vast majority in the wine industry) to conduct bi-weekly testing on employees, Newhart said. On Tuesday, the unit set up shop at Alpha Omega Winery, where bilingual volunteers would test about 60 employees – a combination of vineyard and winery staff.

“We made a conscious decision to focus on agriculture, because it’s been so underrepresented in testing,” Newhart explained. The fear among agricultural employers at the onset of the pandemic, he said, was that positive cases among workers would threaten not only the safety of employees, but disrupt or permanently derail harvest and crush when wine grapes are picked and made into wine.

Employers pay $100 per test – philanthropy covers the rest, including staffing and materials, Newhart said. Results take about 48 hours to receive.

Ultimately, the unit’s reach has extended beyond the agricultural community; it has tested residents of the River Ranch Farmworker Center, but also seniors in St. Helena and – under emergency circumstances – the entire wait staffs of a handful of restaurants.

The unit would also head to Calistoga on Friday, Newhart explained at the Alpha Omega site on Tuesday, in the hopes of making testing further available to Upvalley communities. The county had previously run a satellite testing site in Calistoga, but that site was disrupted by Cal Fire, which took over the Napa County Fairgrounds as a firefighting headquarters.

Relucio said the county’s case rate has dropped steadily over the last six weeks; hospitalizations, too, have decreased, with just two patients currently hospitalized and 14 hospitalized over the course of the last month. The county has had no residents admitted to the ICU in the last two weeks.

Despite those encouraging statistics, Napa County remains classified by the state as having “substantial transmission,” said Relucio. She encourages residents to do their part by social distancing, staying home and wearing face masks. As for the vaccine, much remains up in the air.

“It’s a bit too early to say,” Relucio said about a possible timeline for mass vaccination. “There’s a lot more information to be gleaned about the process.”

Coronavirus hospitalizations in Napa are projected to peak in mid-August. The county's hospitals are prepared to expand capacity if needed, officials say.

Napa County grapples with COVID-19 in group living facilities; 3 deaths in one center

Napa's St. A’s ramping up on-campus learning; everyone will be masked

St. A's transitional kindergarten students have been on campus since August. Come Monday, the rest of the school will join them.

The highest percentage of new cases were people under the age of 20, the county reported.

The service connects patients to a supportive, empathetic licensed counselor who can provide them with the tools needed to deal with the stress and anxiety they might be feeling.

Staff sets up the mobile testing site on Sept. 8 at Alpha Omega Winery, which, like the majority of the hospital's partners, are conducting employee-wide testing every other week.

St. Helena Hospital Foundation President & CEO Glen Newhart readies himself for a swabbing as part of the mobile unit's testing on Sept. 8. The unit has worked collaboratively with Napa County to bolster testing availability up valley.

On-site staff engages with an Alpha Omega employee while the employee waits to be tested for COVID-19 at St. Helena Hospital's mobile testing unit on Sept. 8. The unit has run almost 2,500 tests, according to Newhart.