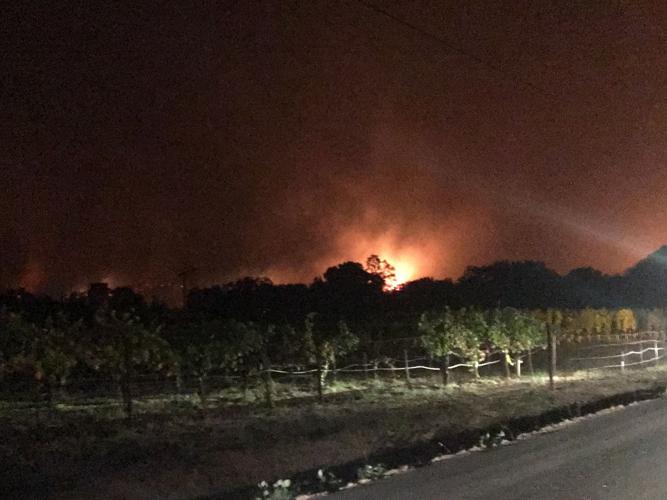 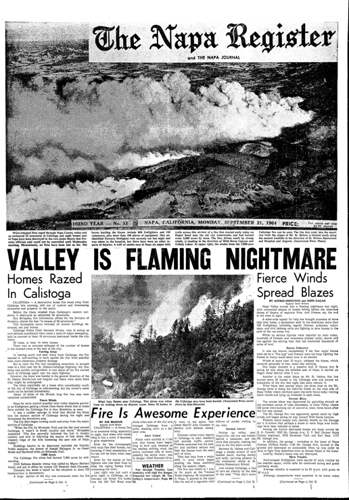 Napa County has a long history of wildfires, with some of the biggest of recent vintage.

Cal Fire records dating back to 1932 show the LNU Lightning Complex Fires of 2020 was the largest, burning a third of the county and even more land in other counties. Altogether, it burned more than 500 square miles.

This monster fire ranks sixth on Cal Fire’s list of largest California fires. Had it broken out in 2017, it would have been number one at the time. All five megafires ahead of it are from 2018 and later.

Acreages on big blazes from pioneer days are unknown, though they did little property damage in a then-sparsely populate area.

Here are some of the county’s bigger wildfires:

Great Fire, October 1870 – The name comes from a Sonoma Democrat article. Two fires in St. Helena and one in Calistoga merged and swept over the Mayacamas Mountains into Sonoma Valley.

“One of the most extensive and destructive fires of which we have record,” the paper said.

September 1913 Fire – The St. Helena Star called this "the worst fire in the history of Napa County."

It began in Chiles Valley and was spread by a north wind. It killed a woman and her young daughter. It prompted an assemblyperson to send a telegram to the governor: "Fire raging in mountains near Napa. Twenty families are homeless. Fire beyond control. Can you help?"

As an encore, a fire shortly thereafter in Conn and Sage canyons sent smoke through the streets of St. Helena.

1931 Fire — This fire began in Berryessa Valley in early July and swept down the Blue Ridge mountains into Solano and Yolo counties, burning about 40,000 acres. It destroyed buildings, grain, pastures and equipment as it went from ranch to ranch.

"The blaze has been one of the worst in the history of Napa County, according to old-time residents," The Napa Register reported on July 6.

"Valley is Flaming Nightmare," the headline of the Sept. 21, 1964 edition of The Napa Register said.

September 1965 fires – Eight fires started at about the same time and burned more than 40,000 acres, destroying at least 30 structures. The Kaiser Fire burned from south of the city of Napa to American Canyon Road. Fires burned near Monticello Road, Old Sonoma Road and in Chiles and Conn valleys.

Miller Canyon Fire, 1988 – The 35,000-acre fire started in Solano County north of Vacaville and burned along the Blue Ridge into Napa County near Lake Berryessa. It destroyed at least seven homes.

LNU Lightning Complex Fires, August 2020 – The largest known fire in Napa County’s history burned 306,000 acres in four counties and an estimated 165,000 acres in Napa County. That’s roughly a third of the county. It destroyed 522 structures in the county, including homes at Spanish Flat and Berryessa Highlands.

Glass Fire, September 2020 – The 40,000-acre fire started in mountains east of Napa Valley and burned across the valley to the Mayacamas Mountains. It destroyed 1,022 structures. Homes, wineries and resorts were lost.

Gunman kills 10 in ‘racially motivated’ shooting in Buffalo, US