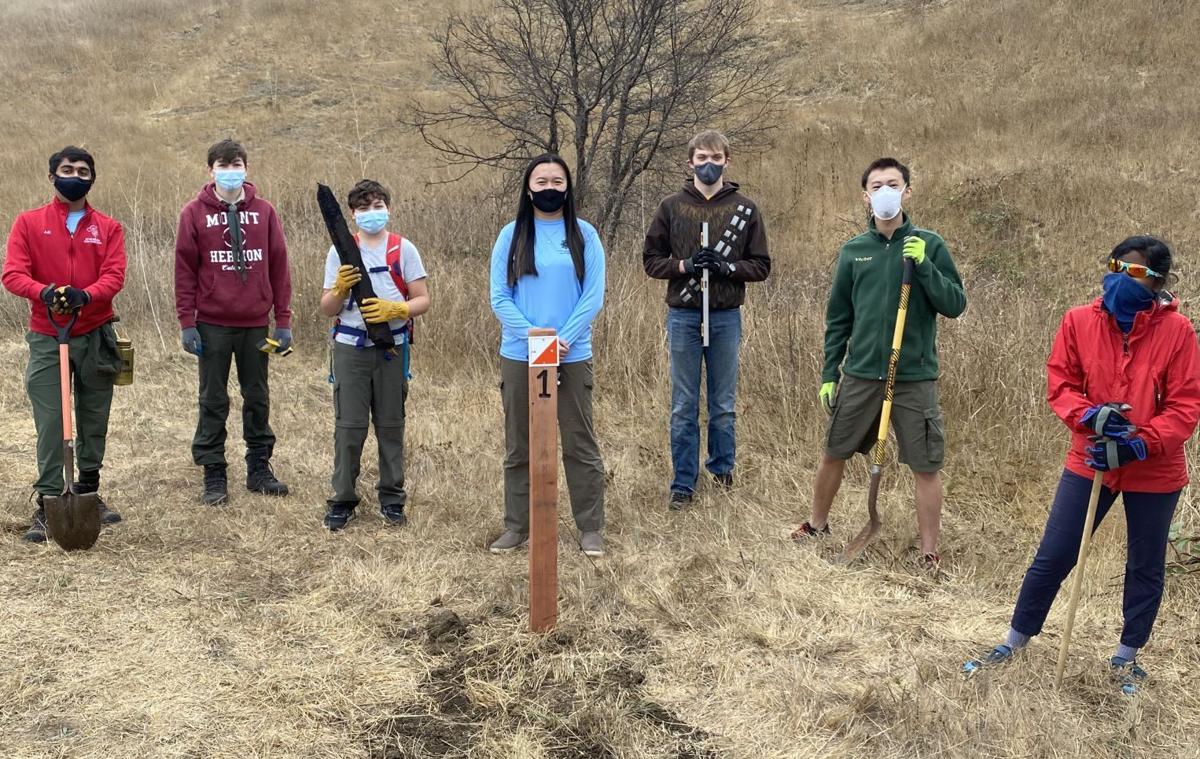 Vanessa Chen, center, and her team replaced burned trail markers at the Newell Open Space Preserve in American Canyon as part of her Eagle Scout project. 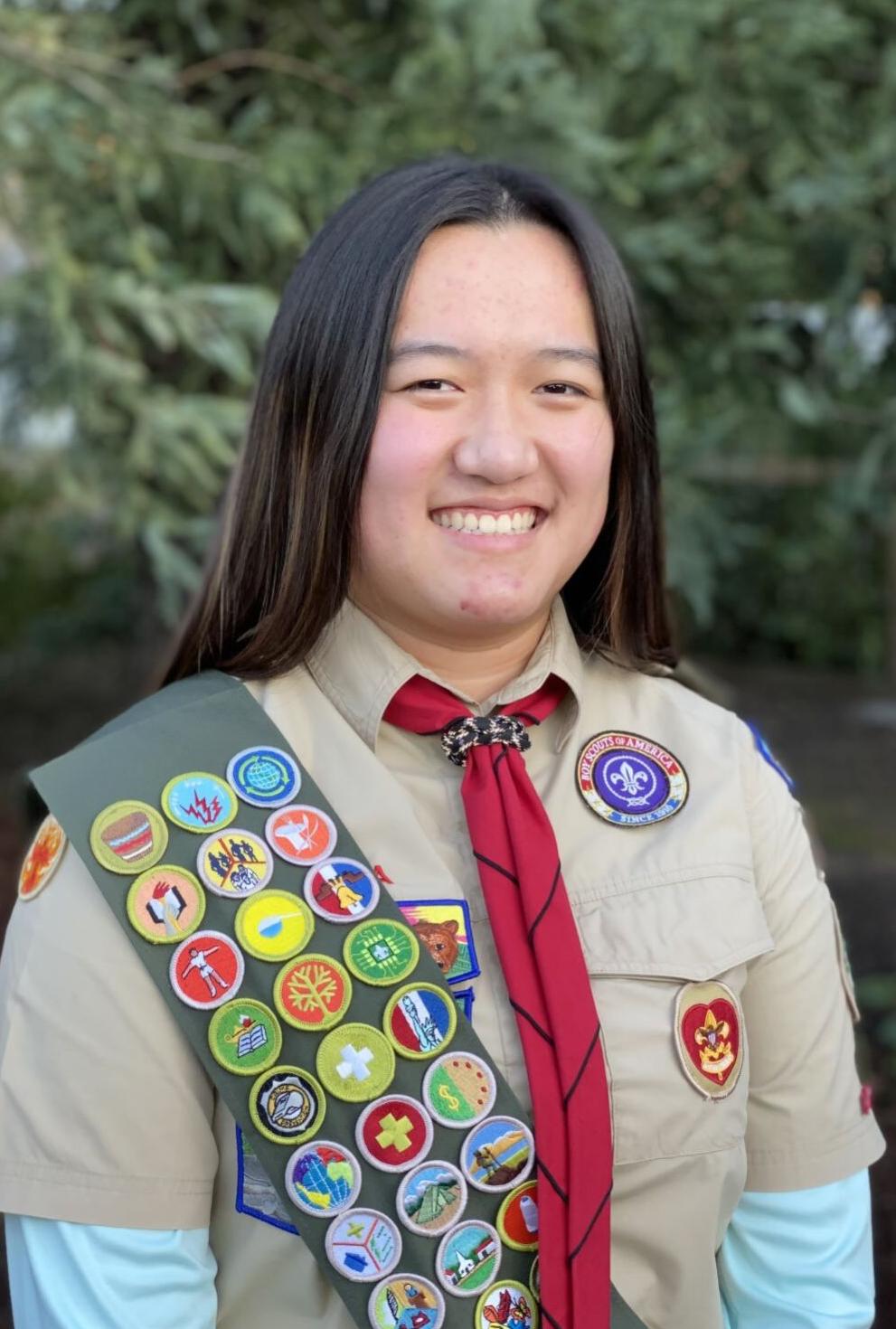 Girls have only been allowed into the Boy Scouts of America for two years, which is slightly longer than it took Chen to earn the Eagle Scout distinction as part of the inaugural local class of female BSA members, her scoutmaster Nancy Link said.

Chen joined the BSA in 2019 and while she hasn’t “fully committed to it,” will likely attend Stanford University in the fall. She said she plans to study a double major in math and physics with an eye toward pursuing a career with NASA.

Reaching the rank of Eagle Scout requires mastering a slew of steps including a public service project. Chen’s was replacing signs within American Canyon’s Newell Open Space Preserve that were burned in the 2019 wildfires.

“There’s an area there called Scout’s Grove where we went to, to plant oak trees, so that place has a connection to my troop,” Chen said.

Chen said she led a group of scouts to create eight directional markers and four orienteering markers from scratch, and then installed them.

“Some of the scouts were inspired by this to pursue their Eagle rank, and my project served as a symbol of hope that we can make a difference even in a pandemic,” she said.

Chen said it was the process itself that was the most valuable and rewarding part of earning the Eagle Scout rank.

“It helped me gain confidence and helped me use my leadership skills,” she said. “Everyday I learn from scouting, things that will translate into my adult life.”

Chen is the first, and so far only, female Eagle Scout from the Silverado District (which includes Napa, American Canyon, Angwin, Benicia, Calistoga, Vallejo, St. Helena, and Yountville) and is one of only 23 young women of the Golden Gate Area Council to achieve this honor, Link said.

“She’s an amazing woman with a sweet, quiet spirit,” said Link, a lifetime Girl Scout. “The girls loved her leadership, and she really achieved her goal. The fact that she’s done it in less than two years is remarkable.”

Doing it during a worldwide pandemic added a whole other layer of issues to overcome, Link said.

Through Scouts, Chen has “grown as a leader and experienced many adventures,” Link said.

“She attended two high-adventure camps and will attend a third this summer. In January of 2020, Vanessa built and slept in a snow quinzee (hut) at the BSA Northern Tier High Adventure Camp,” she said. “Last summer, she sailed 50 miles around the U.S. Virgin Islands through BSA’s Seabase High Adventure Camp, where she was joined on the Fairweather with four other scouts, two scout leaders, the captain, and a canine ‘first-mate.’ This summer, Vanessa will backpack over 40 miles at Philmont Scout Ranch in Arizona.”

Despite her busy schedule, including BSA and Girl Scouts, marching band, college classes, and volunteer work, Chen has “maintained a focus on academic excellence,” Link said.

“She has consistently been on the Honor Roll at Vintage High School and was recently offered early acceptance to Stanford University,” she said.

“She works hard at everything she does,” she said. “And her accomplishment proves to the other girls that it can be done. It’s a huge honor that stays with the Eagle Scout forever. It’s pretty amazing.”

Only a small percentage of Boy Scouts ever earn the Eagle Scout designation, the highest rank the BSA bestows. It requires completing 21 merit badges, serving one’s troop in a leadership role, and planning, developing, and leading a service project to benefit the community, Link said.

Troop 7062 is based in American Canyon is part of the Silverado District of the Golden Gate Area Council. Troop 7062 is chartered by the Boys and Girls Club of Napa Valley. If interesting in joining, contact by email at troop7062@gmail.com or text at 707-341-0761.

“Scouting is a unique opportunity, and I wish everyone would take advantage of it,” she said. “Also, I’m part of troop 7062G and we’re recruiting more girls.”

WATCH NOW: A PEEK INSIDE THE NAPA RECYCLING FACILITY

A vehicle stop outside a Napa supermarket led to the rider’s arrest on suspicion of felony theft, according to police.

Napa Police is seeking information connected to the discovery of unlicensed “ghost guns” this week that led to the detention of two teenage boys.

Two store workers were robbed at gunpoint in American Canyon, and at least four suspects took the store's safe and cash from the till, authori…

Napa Police is seeking information about a vehicle burglary shortly before Christmas, in which a bag containing the victim’s prosthetic leg wa…

A community of homeless Napans was evicted from a north Napa parking lot. What happened?

This downtown Napa historic mansion has been renovated from top to bottom. Take a look inside.

Bryan Vega of St. Helena is Youth of the Year for the Boys & Girls Clubs of St. Helena and Calistoga. The other nominees were Nevaeh Sanchez (St. Helena), Hanna Aguilar (Calistoga) and Kaitlyn Sanders (Calistoga).

World War II airman Paul Galleron of Rutherford was forced to land in Russia after his plane sustained damage during a bombing mission against the Japanese.

Are your cabinets a disorganized mess? Napan Mackenzie Payne, owner of Fresh Start Organization, wants to help you.

The Boys & Girls Clubs online auction The BIG Night is open to the public and takes place Aug. 16-22, culminating in the live auction and gala on Aug. 21.

This Napa grad is a real life rocket scientist — and he's working on a future mission to Mars.

Vanessa Chen, center, and her team replaced burned trail markers at the Newell Open Space Preserve in American Canyon as part of her Eagle Scout project.