Become a Member
Read Today's E-edition
Share This
Napa County hit by a drought-denter, but not drought buster
Share this
1 of 2 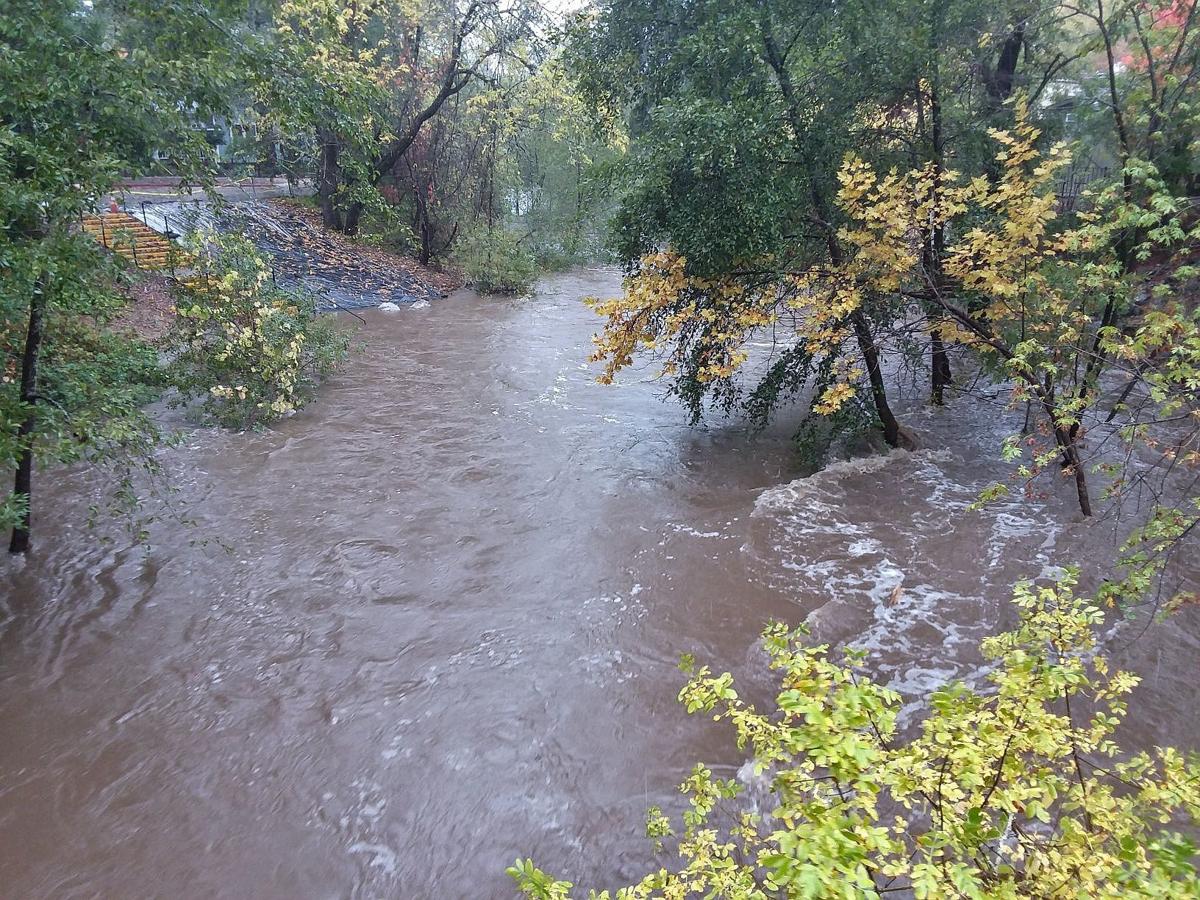 A weekend deluge had the Napa River flowing again at Calistoga after it had been sapped during a two-year drought. 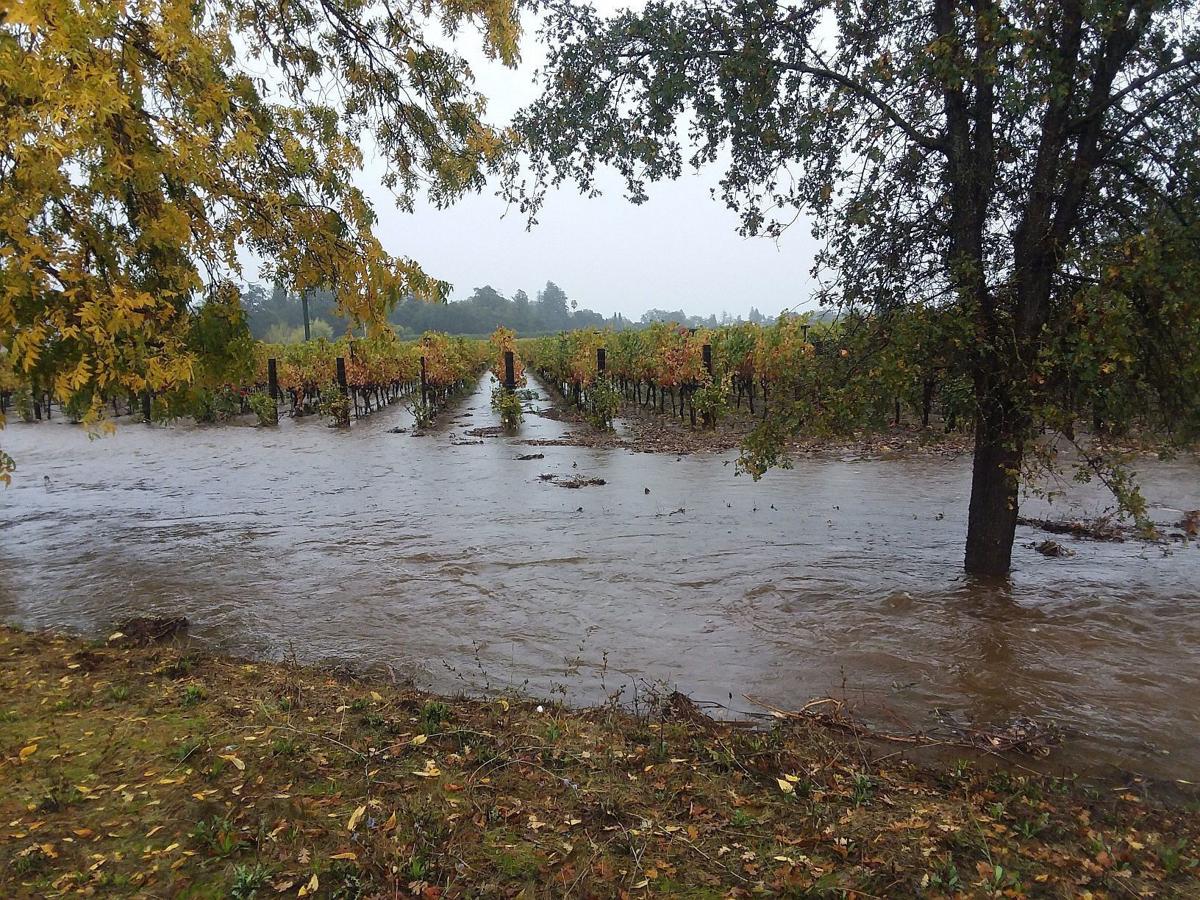 Water from the weekend storm ran through the Charles Krug vineyards near St. Helena.

Napa County after a drought-denting — but not destroying — deluge had a section of Silverado Trail closed, wildfire dangers tamped down and reservoirs starting to see runoff.

And all of this happened in a newly born rain season that hasn’t even made it to Halloween. A few storms last week proved to be a mere warmup to virtually 24 hours of non-stop, pounding rain from Saturday night into Sunday night.

Can you bust a two-year drought of almost historic proportions in only a few days?

We don’t yet know the totality of a coming winter with La Nina conditions, Pechner said. La Nina winters are dry 60% of the time. It will take a normal rain year to end the drought.

“No,” National Weather Service meteorologist Brayden Murdock agreed. “It made quite a dent ... we’re in quite a deficit, but this is a big step. Think of it as win, but one step forward after taking three steps back.”

But what a step forward. The start to rain season 2021-22 is stupendous.

Rain totals taken from the local One Rain gauge network as of Monday morning tell the soggy story. The city of Napa corporation yard for October has had 8 inches, St. Helena 14.12 inches, Angwin 14.72 inches and Mount Veeder 16.90 inches.

Napa State Hospital as of 4 p.m. Sunday had 6.78 inches for October and the new rain season. For comparison, it had 10.24 inches during the entire, previous rain season. The average rainfall for an entire season is about 25 inches.

Then there are the 24-hour totals from the atmospheric river rain conditions over the weekend. Pechner said Mount Veeder had 11.74 inches, Angwin 10.6 inches and the Napa corporation yard 7.37 inches.

Whether Napa County set any one-day records remains to be seen. Murdock said the National Weather Service didn’t know as of Monday morning when it was still monitoring the storm in Monterey.

But the National Weather Service reported San Francisco’s 4.02 inches over 24 hours looks to be the fourth wettest day there on record. Downtown Sacramento set a one-day record with 5.44 inches, breaking the previous record set in 1880.

“It’s going to be a few days to get everything cleaned up,” she said.

For drivers, one event of note was a washout that undermined a section of Silverado Trail between Meadowood Lane and Madrone Knoll Way. Silverado Trail — a major north-south Napa Valley roadway — was closed in both directions as of Monday pending repairs.

“It’s very early in the assessment, but we hope to have the road opened in a week or less,” county Public Works Director Steven Lederer said Monday morning.

Another was the closure Monday morning of Highway 128 at Lake Berryessa between Markley Cove and Monticello Dam, which was closed for several hours before crews could clean up a mudslide. Greenbaum said a report done after the 2020 LNU Lightning Complex Fire identified this as a severe burn area vulnerable to a slide.

Lake Hennessey reservoir, a major city of Napa water source in the mountains east of Rutherford, within a few days rose from 58% full to 66% full. During the 2020-21 rainy season, it actually lost water.

Creeks that barely ran last rainy season over the weekend surged with water, as did the upvalley stretches of Napa River. They went from bone-dry to reborn in the course of a few days.

Hillsides that looked primed to burn a couple of weeks ago as of Monday were soaked. Pechner said the storms put an end to fire season.

“The earliest we’ve seen the end of fire season in, I don’t know how many years,” he said.

Flood control gates on McKinstry Street shut at 9 p.m. Sunday in anticipation that the river might spill into the flood control bypass between the Oxbow district and downtown Napa. Workers scrambled to move portable toilets and other items in the bypass, though they couldn’t remove the Oxbow Riverstage.

As it turned out, the river lapped over the weir, but didn’t surge through the bypass. Rick Thomasser of the county Flood Control and Water Conservation District said a low tide at peak river stage is probably the reason why.

The thought of the bypass flowing in October with the rain season barely begun is something of a stretch. It hasn't happened since the bypass completion in 2015.

Atmospheric rivers usually happen in December through February, Murdock said. The last time one happened locally in October was 2015.

The National Oceanic and Atmospheric Administration describes an atmospheric river as a flowing column of condensed water vapor that produces significant levels of rain and snow. Atmospheric rives are responsible on average for 30% to 50% of normal rainfall on the West Coast.

These atmospheric rivers are about 250 miles to 375 miles wide on average. They are present somewhere on earth at any given time, according to the agency.

Few in Napa County will have any doubt where the location was over this past weekend.

No encore performance is in the immediate forecasts. Napa County might see some rain Tuesday and on the weekend, but as of Monday, the National Weather Service had no drought-busting storms predicted.

A drive to create Napa County micro-wineries has taken a big step forward.

Napa County wildlife faces challenges with parts of the Napa River drying up and the landscape parched.

Road work delayed by last week’s Bay Area storms has been rescheduled for later this week, and drivers should expect delays, according to officials.

This weekend’s storm drenched the Upvalley and damaged a segment of Silverado Trail, but it won’t help with St. Helena’s Phase II water emergency.

Upvalley traffic woes related to a Silverado Trail washout could last a couple of weeks.

Haunted dolls are wreaking havoc on a front yard in west Napa.

These Napa teens created pumpkin art at the library. Check it out.

“Beyond organic” and the philosophy of biodynamic viticulture

The "Demeter" certification goes all the way back to 1924 Germany, and stems from the ideas of philosopher and researcher Rudolf Steiner.

Napa County hopes complete storm-related repairs on Silverado Trail near St. Helena by next Monday, allowing that section to be reopened.

Napa County hopes complete storm-related repairs on Silverado Trail near St. Helena by next Monday, allowing that section to be reopened.

The nonprofit Angwin DART (Disaster Airlift Response Team), a coalition of more than 20 volunteer pilots, has upgraded its radio system to allow for statewide communication during emergencies.

What will it take for California drought to end? It's way more complicated than 'rain'

This year marks the second driest year on record.

Napa County on Thursday said that, barring the unforeseen, Silverado Trail near St. Helena should reopen on or by Friday, Nov. 5.

The town this year is receiving only 400 acre-feet from state-owned Rector Reservoir, although October rains boosted its supply somewhat.

A weekend deluge had the Napa River flowing again at Calistoga after it had been sapped during a two-year drought.

Water from the weekend storm ran through the Charles Krug vineyards near St. Helena.