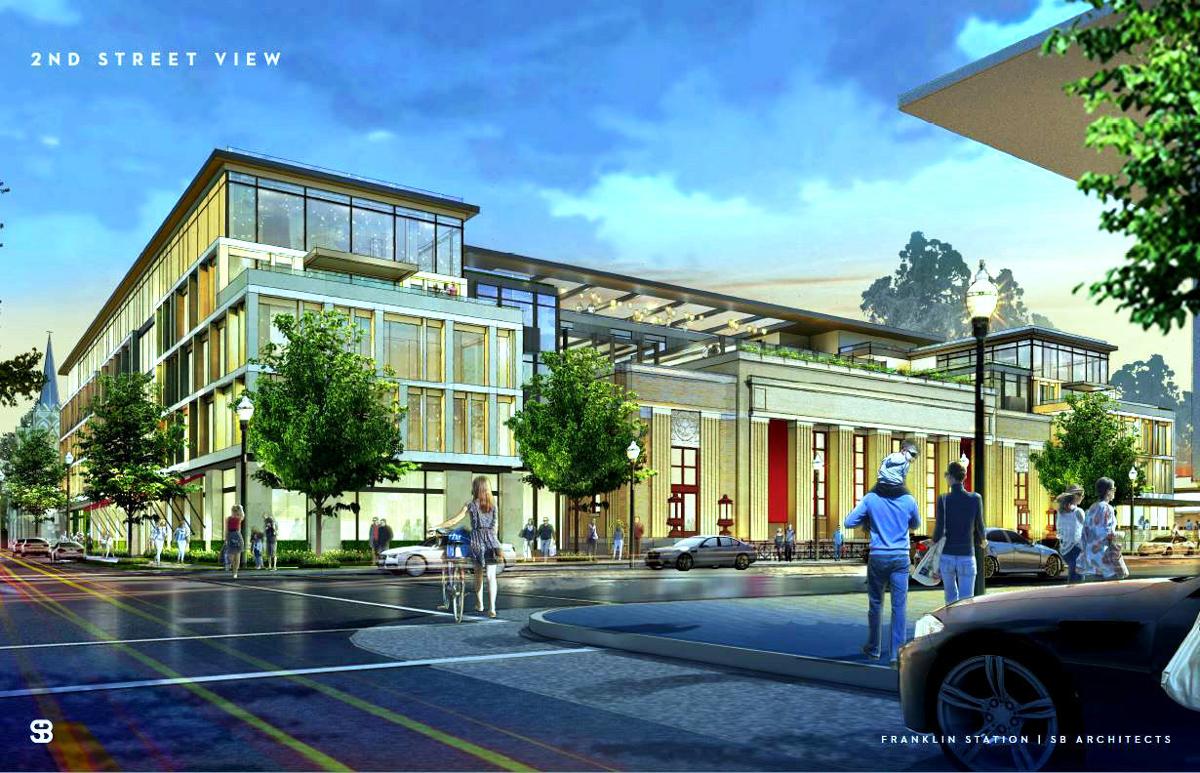 Downtown Napa's Franklin Station post office building, closed due to structural damage from the August 2014 earthquake, is slated for redevelopment into a five-story luxury hotel with 163 rooms and suites.

A plan to recast downtown Napa’s earthquake-ravaged post office building into a sleek luxury hotel has received one of its first reviews – a less-than-enthusiastic one.

In a letter to the city, Napa County Landmarks questioned the design of a five-story, 163-unit hotel that is to incorporate the façade of the former Franklin Station post office, a 1930s Art Deco landmark on Second Street that has been empty since absorbing serious damage from the 2014 earthquake.

The 175,000-square-foot multistory design, which wraps extensive swaths of plate glass, metal and other contemporary materials around the existing tan-brick entryway, would swallow up too much of the post office’s original look to make its historical context clear, according to Landmarks president Ernie Schlobohm.

“We believe that the current concept plan shows a new structure which covers too much of the sides, obscuring the geometry and massing of the existing building, and the relationship to the existing site,” he wrote in a May 30 letter to the Planning Commission, the city’s five-member land-use authority. Schlobohm also said the Landmarks group has not yet been consulted on any drafts of the post office-to-hotel conversion.

The letter was included with staff reports released ahead of Thursday’s scheduled meeting of the Planning Commission, which was to have had its first in-depth look at the hotel plans filed by the owner and co-developer, James Keller. However, planners postponed their review because Keller’s legal counsel was unable to attend; no makeup date was immediately announced.

During the commission’s brief 18-minute meeting, one Napa resident echoed the Landmarks’ concerns about the hotel’s design and also questioned whether it would be in the proper scale to its surroundings – particularly given its 70 ½-foot height, which would require a zoning exception to exceed a 60-foot cap.

“This building, as presented, is too big for that area,” said Joe Newman, a member of the committee that helped developed Napa’s Downtown Specific Plan for city-core development in 2012. With a height within 5 feet of the Archer’s on heavily traveled First Street, he added, a multistory hotel on Second Street would tower over much smaller-scale construction on the outer edges of downtown, he told commissioners.

Keller’s conversion of the old post office earlier won support last year from the city’s Cultural Heritage Commission, which certifies whether projects involving landmark structures preserve their historic value. The proposal then gained approval from planners and finally, in November 2018, the City Council, which granted a rezoning and building agreement to pave the way for a hotel.

Keller’s hotel project is intended to breathe new life into the post office building, which was penned by the longtime Napa architect William H. Corlett. It opened in 1933 as a federal Public Works Administration project, then was added to the National Register of Historic Places in 1985 as an example of Depression-era Art Deco public construction sponsored by the federal government.

The South Napa earthquake of Aug. 24, 2014 ripped deep fissures through the building’s brickwork and forced the post office’s immediate closure. Afterward, the U.S. Postal Service announced it would tear down the structure rather than seek repairs it estimated would cost $8 million, but the resulting outcry from Napans and historic preservationists led the agency to change course and put it up for sale. (The Postal Service later relocated its downtown branch to a storefront at 1436 Second St.)

Keller purchased the Franklin Station site in March 2017 for $2 million and announced plans to refashion the quake-damaged building as a hotel. The hotel would also occupy the parcel where Zeller’s Ace hardware now operates.

In connection with the plan, he acquired a city-owned parking lot at 1251 Second St., which will become home to an automated 228-vehicle garage where 65 spaces will be open to the public.

Photos: A look inside the downtown Napa Post Office

Napa City Councilmembers Liz Alessio and Mary Luros recently toured the remains of the Napa Post Office on Second Street, which has been shutt…

Downtown Napa's Franklin Station post office building, closed due to structural damage from the August 2014 earthquake, is slated for redevelopment into a five-story luxury hotel with 163 rooms and suites.