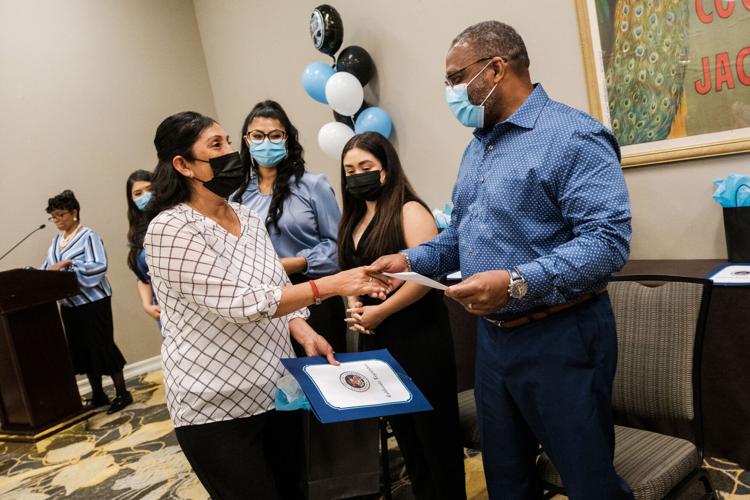 Amalia Apolinar is congratulated by GEO re-entry staff after receiving her program completion certificate in Napa on Wednesday. 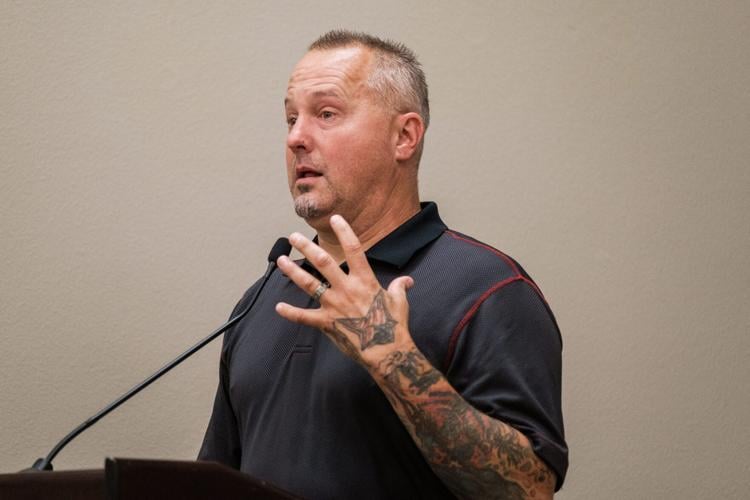 Former GEO re-entry graduate Kenneth Knudsen gets emotional as he addresses the crowd before the GEO re-entry program completion ceremony in Napa. 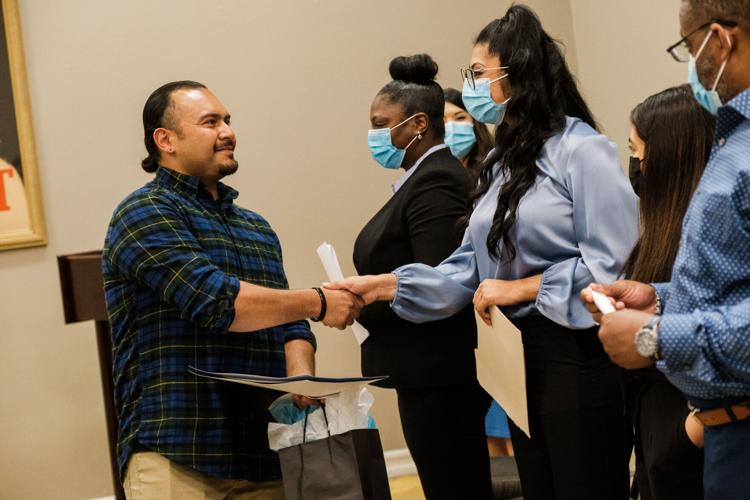 Ricardo Ayala is congratulated by GEO re-entry staff after receiving his program completion certificate in Napa on Wednesday. Ayala was one of 11 people honored at the ceremony. 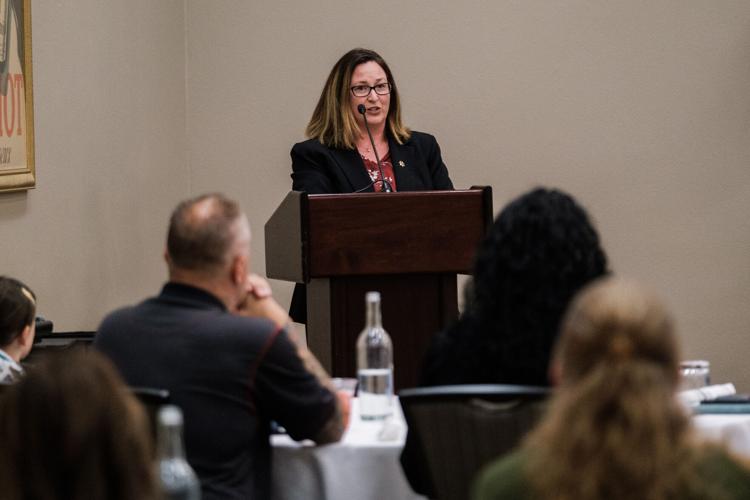 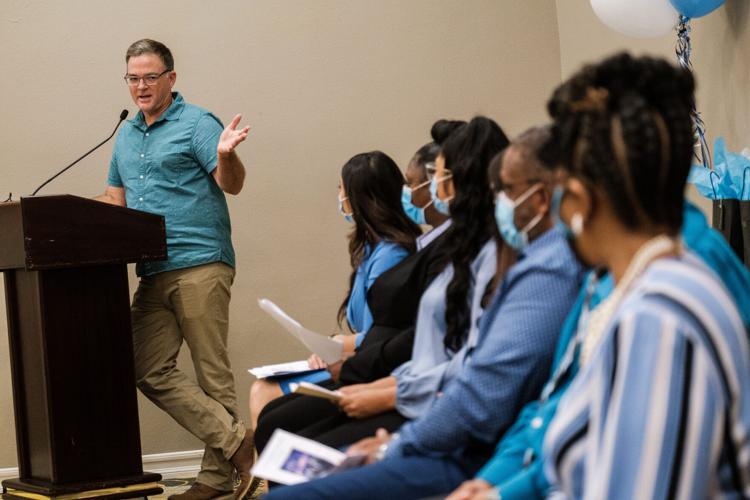 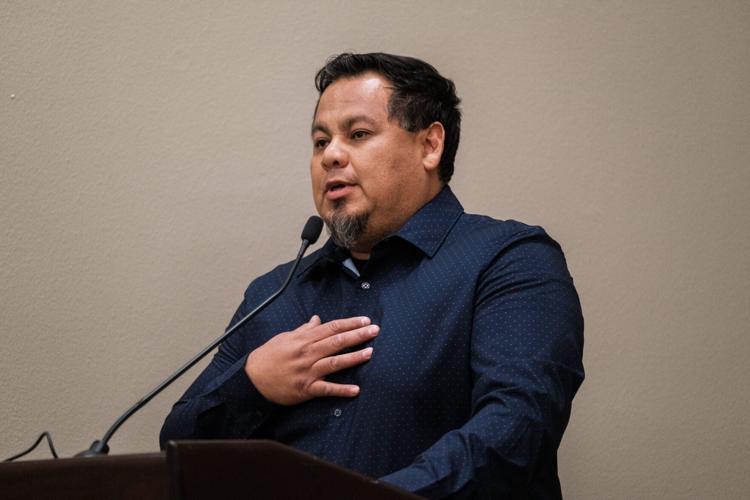 Deputy probation officer David Guerrero addresses the crowd prior to the GEO re-entry program completion ceremony in Napa on Wednesday.

Here's a graduation ceremony with a twist, one that for 11 people honored not only their achievements, but also raised hope for a radical change in how they lead their daily lives.

Their old lives involved troubles that led to arrest. Their new lives are to involve more self-awareness and, if all goes as planned, one glaring absence — another brush with the criminal justice system.

“Now I feel like someone new,” said Amalia Apolinar, one of the graduates.

Apolinar had problems with alcohol that resulted in drunken fights with her husband, leading to violence and jail. But that’s in the past.

“We’re together again,” she said as she waited for the ceremony to begin. “It’s just everything was the alcohol.”

She still has her job doing banquets at a Calistoga resort. It took her two years to overcome her problems, she said.

On Wednesday, she went to the microphone in a hotel banquet room before about 50 people.

Another graduate, Ricardo Ayala, spoke of his troubles with alcohol that led to three driving-under-the-influence arrests. He felt like he had lost everything and everyone important to him, though those things were really still there.

“I was the one who was absent,” he said.

It just took him awhile to come to that realization.

“You do it for fun at first,” he said. “Then you realized you end up needing it and then it’s not so easy to let go.”

Ayala told himself as long as he could keep a job and not get caught, he’d be fine. Then he tried to solve his problems by himself. It felt good doing the research, but it wasn’t enough, he said.

“I still drank," he remembered. "I still used, just not as often. But when I did, I made up for lost time. Nothing was the same anymore, that rush I would get, the feeling everything was fine.”

“I fell again and again and again, until I was faced with losing my freedom," he said haltingly. "And the thought of being away from my little son, who I love with all my heart…The thought of him of him being without a father if I continued down this path."

Broken images came to his mind, the faces of his mom and dad and other family members, said Ayala.

He went through the Community Corrections Service Center program, checking in each day while also working and picking up his son. He is prohibited from driving, so he uses a bike and Uber for transportation and gets rides when he can.

“You really have to work hard to get to the root of the problem, where it all comes from,” Ayala said. “You can’t lie to yourself. … It was tough. You have to be willing to leave behind a lot of negative friendships. You have to put a lot behind you.”

Before the graduates came forward, they heard from various speakers. One of them was Kenneth Knudsen, who graduated from the program in 2019.

He has been sober for more than five years, he said.

“The fight is not over, though, for you graduates who are graduating today,” Knudsen said. “The real-life struggles start when there’s no structure, no program. Not to make you scared, but the real work starts now.”

He offered to give his phone number to the graduates so they would have someone to talk to if they are struggling.

As for Knudsen, he and his wife adopted their two grandchildren.

“It’s a blessing to be able to be part of their lives, because they didn’t have it as well as most people," he said. "… I get a chance to raise my grandkids again because I wasn’t a father for my own kids. So this is a second chance. Thank you, Lord, for bringing my grandkids into my life."

Program manager Sundy Pech thanked the graduates for “being my inspiration and part of my journey."

“You now have the opportunity to inspire others with the story of your success, should you choose to tell it to anyone who needs to hear it,” she told the graduates.

The Napa County program began in 2009 and is run by GEO Reentry Services. The county pays up to $1.2 million annually for the day reporting center, which last year served 173 offenders. As of 2021, it had graduated 328 people.

Malfatti man finds new home: Clemente's of Napa, famous for its raviloi and malfatti, moved to Trancas Street in Napa.

Napa police reported the arrest of a woman on suspicion of felony DUI after a two-vehicle wreck Saturday caused minor injuries to the other driver.

Love, loss and larceny: A Napa man fell victim to identity theft by a loved one. Now his former fiancée will serve 30 days in jail for the crimes.

Napa’s Waverly Street trees to be removed over coming weeks

Despite community outcry over the removal of over 30 old Waverly Street trees, city officials said the trees need to come down starting Monday because of needed infrastructure improvements.

Zodiac Killer suspects are a dime a dozen, but author Jarett Kobek may have stumbled onto one of the more substantive cases in decades.

A Fairfield man drowned in Lake Berryessa on Thursday, according to the Napa County Sheriff's Office. Three people previously died by drowning in the lake this summer.

A man reportedly stole alcohol from Nob Hill Foods on Saturday. Police arrested him and returned the alcohol. Then the man tried to take it back from a store employee, police said.

Referendum on Russia: Kyiv and Western allies call the vote a 'sham'

Sugar overdose? New survey predicts how big candy sales will be in 2022

Sugar overdose? New survey predicts how big candy sales will be in 2022

Amalia Apolinar is congratulated by GEO re-entry staff after receiving her program completion certificate in Napa on Wednesday.

Former GEO re-entry graduate Kenneth Knudsen gets emotional as he addresses the crowd before the GEO re-entry program completion ceremony in Napa.

Ricardo Ayala is congratulated by GEO re-entry staff after receiving his program completion certificate in Napa on Wednesday. Ayala was one of 11 people honored at the ceremony.

Deputy probation officer David Guerrero addresses the crowd prior to the GEO re-entry program completion ceremony in Napa on Wednesday.