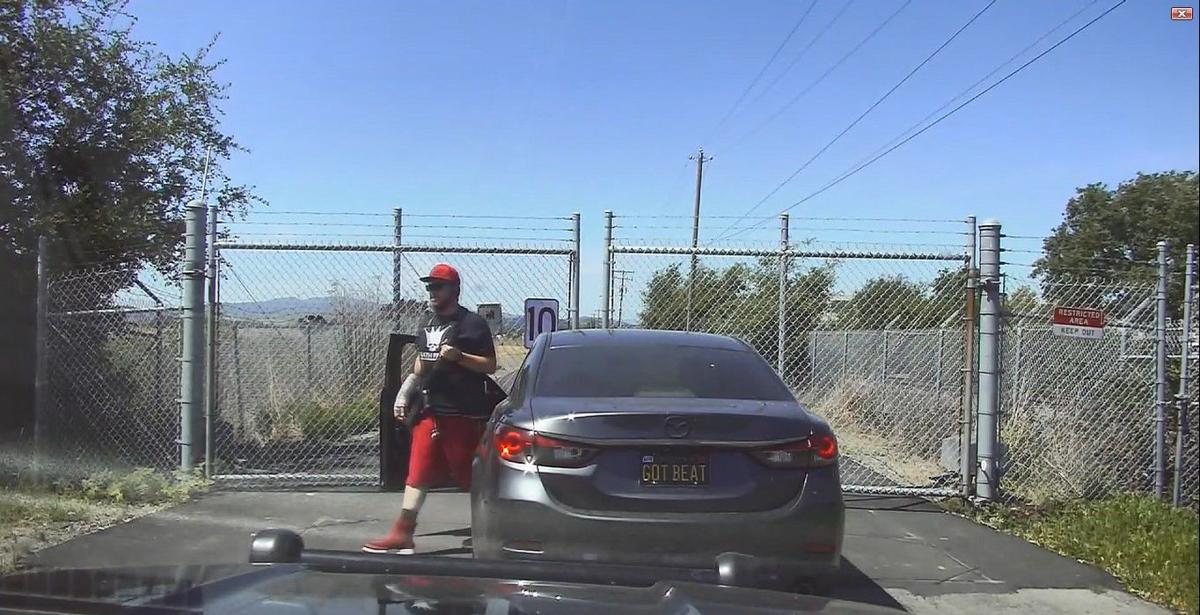 This screen capture from a patrol car's dashboard camera shows Brandan Reid Nylander exiting his car while carrying a shotgun, moments before he was fatally shot by a Napa County Sheriff's deputy on April 24. 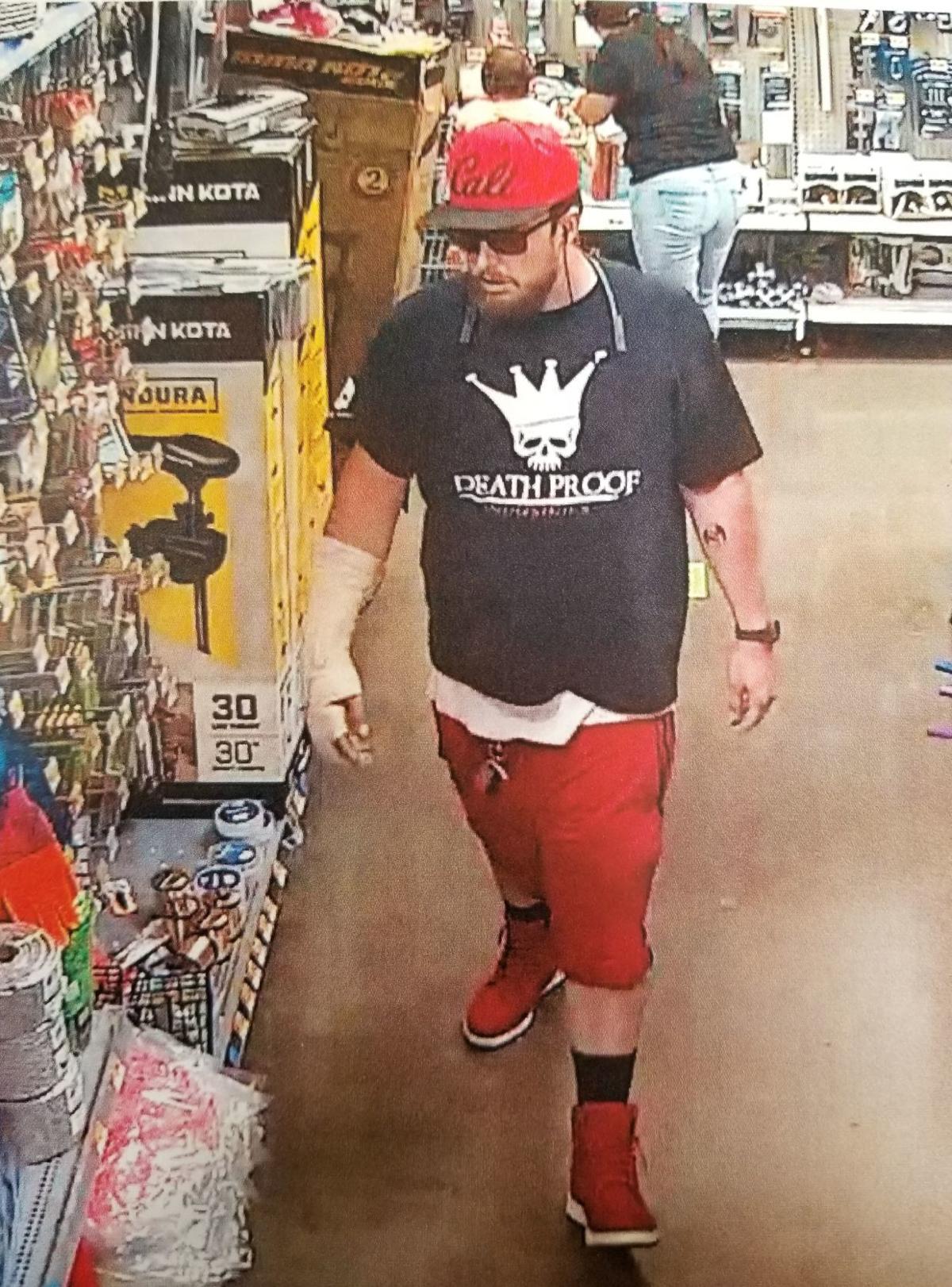 Brandan Reid Nylander, 24, of Napa shown on security camera footage, provided by the Napa County Sheriff's Office, in the Napa Walmart on Friday. Investigators say he stole ammunition and fled and later was killed in a confrontation with deputies near the Napa County Airport.

A sheriff’s deputy’s fatal shooting of a 24-year-old man suspected of robbing the Napa Walmart took place in a four-second, four-round burst, according to a video released by the Napa County Sheriff’s Office.

A silent two-minute and 19-second video, captured by a dashboard-mounted camera in Lee’s patrol vehicle, shows the final moments of Nylander, who Robertson described as having suicidal thoughts in the days before his death.

On the day of the incident, Nylander left his Napa home with a shotgun in hand and drove to the local Walmart with a hammer in his waistband, Robertson said Tuesday.

Napa’s dispatch center received its first 911 notice at 2:09 p.m., when a caller said a man at Walmart smashed a glass case and grabbed shotgun shells before throwing a hammer at a store worker and fleeing, according to Robertson. (The employee suffered a minor injury but was not hospitalized, Robertson said later Tuesday.)

Within two minutes, dispatchers issued a description from three Walmart workers of Nylander’s car, a dark-gray Mazda sedan with a license plate reading “GOT BEAT,” Robertson said. At 2:25 p.m., Deputy Lee saw the Mazda heading south on Highway 29 toward Airport Boulevard, turned on his dashboard camera and tried to stop the car, but Nylander instead drove erratically and accelerated to 75 mph on the road shoulder, according to Robertson.

The video shows Lee following Nylander onto westbound Airport Boulevard, then onto an access road to Napa County Airport where a locked fence blocks Nylander’s way.

Nylander – clad in red shorts and cap and a black T-shirt emblazoned “DEATH PROOF,” the title of a Quentin Tarantino movie – opened his car door as Lee was still stopping his patrol car, according to Robertson. Three seconds later, Nylander stepped out, holding a loaded shotgun in both hands, and pointed it toward Lee and another deputy pulling up on a motorcycle, the sheriff said.

In response, Lee fired two gunshots that missed Nylander, according to Robertson. The video then shows Nylander turning his back to the deputies, raising his arms but still holding the weapon in his left hand as he walks to the front of his car.

Lee then fired a third shot that struck Nylander’s buttocks, then a fourth that hit him in the back of the neck, Robertson said.

Cal Fire personnel arrived to provide medical aid, but Nylander was declared dead at the scene at 2:40 p.m., according to the sheriff.

Lee, who has served in law enforcement for more than 20 years, has been on paid administrative leave since the incident.

“Had I been in the same situation on the same timeline, I would have taken the exact same action as Deputy Lee had taken,” Robertson said Tuesday. “... Mr. Nylander, by his own action, was a threat to the deputies.”

Preliminary testing has suggested the presence of drugs in Nylander’s body, but the Sheriff’s Office is awaiting further testing by the state Department of Justice, according to Robertson.

Napa County’s Major Crimes Task Force is conducting the investigation, which Robertson said is drawing on video, witness statements, and evidence from Nylander’s home, car and the two incident scenes.

Before his death, Nylander left a written note on a plastic tablet for family members, Robertson said. He declined to speak in detail about the note’s contents but said it indicated Nylander was “distraught.”

The events leading up to the shooting were far out of character for Nylander, according to Sarena Nylander, who identified herself as Nylander’s aunt in a Facebook post.

She wrote after the shooting that her nephew had struggled with his mental health and she believed he’d intended to kill himself.

“That’s all there is to it,” she wrote in a separate comment. “It’s absolutely horrible and sad. He wouldn’t hurt a fly. Just himself.”

Her nephew was “the sweetest person on the planet,” she wrote, and was a kind and loving presence around her daughters, his three young cousins. Brandan was staying with Nylander and her husband, Brandan’s uncle, she wrote.

Nylander had mentioned feeling “in the gutter” lately, according to a long-time friend in Sonoma County. His mother, a single mom, had passed away around the time they’d dated, she said, and the loss had been hard on him. The two had been each other’s support systems, the friend said in an interview.

The friend, who asked that her name not be used, said they had made plans to see each other once the shelter-in-place order ended the Monday before he died.

The last time they spoke—just days before his death—he was talking about his future, the friend said.

“He had mentioned some issues with depression, but said he wanted to join the marines,” she said. “He had been doing some work with the fire department in Napa County, too, and I think he was going to talk with them (about joining permanently) (this) week.”

One childhood friend living in Placer County, where Nylander had grown up, wrote to the Register, expressing their shock over the way he’d died and describing him as “a gentle giant.”

“(Brandan) was quiet and reserved. A tad awkward,” she wrote in an email, asking that her name not be used over privacy concerns. “But he was a good guy.”

Nylander’s grandmother and uncle became his legal guardians after the death of his mother in 2012, Placer County Superior Court records show. He attended Sierra College in Rocklin, in Placer County, according to his LinkedIn profile, which lists previous jobs Nylander had held as a grocery store clerk and at a manufacturing firm elsewhere in Placer County.

“(I am a) detail-oriented, quick learning, hands-on professional, with a successful record of accomplishments in retail/customer service as well as experience in construction,” Nylander wrote in his bio.

Nylander’s existing criminal record, prior to Friday’s shooting, is minimal. He’d been ticketed a few times for speeding, Placer County Superior Court records show. A previous charge for a misdemeanor property offense – likely an incident of petty theft – had been dismissed, according to court records. Local officials said Nylander had no previous record of offenses in Napa County.

Nylander’s profile on Roomies.com, a forum for individuals searching for roommates or shared living situations, showed he was actively looking into his own space in Napa County.

“I’m in desperate need of a room until I can get back on my feet from a complicated family situation,” Nylander wrote. “I currently have a job with Napa County, not married, no pets, and I’m generally a quiet person.”

Nylander was the second person in 14 months to die in a shooting involving the sheriff’s office.

A report from Napa County District Attorney Allison Haley stated Hernandez Morales had multiple aliases and an extensive criminal record, including charges of selling drugs, assault, drunk driving and battering a law enforcement officer. Several weapons found inside his car were all unregistered, and at least one was reported stolen, according to the report.

Relatives of Hernandez Morales wrote in an op-ed to the Napa Valley Register that he suffered from depression and used drugs and alcohol to cope with the problem, and called for the community to place greater resources into mental health treatment.

Law enforcement officers also were cleared by the district attorney of wrongdoing in a previous fatal shooting on Dec. 5, 2018, when a Napa city policeman killed 27-year-old David Alejandro Molina. The incident was the first to be captured body-worn police cameras, which the department had issued only weeks earlier, although the dark nighttime footage included only the sounds, not images, of the fatal shots.

After a foot chase toward an apartment complex off Soscol Avenue, Molina and Officer Christopher Simas struggled for control of Simas’ rifle, and Molina fired about seven shots into the ground before the officer regained control and shot the suspect, Haley’s report stated.

Molina’s family filed a wrongful death lawsuit against Napa Police in 2019, disputing the department’s account of the shooting. The suit asserted that Molina had an intellectual disability from a childhood brain injury after being hit by a car.

To see the deputy's dashboard video

Watch Now: Why do the vaccinated still fear COVID?

Watch Now: Why do the vaccinated still fear COVID?

Watch Now: What to do when you witness an attack

Watch Now: What to do when you witness an attack

The officer feared for his life when he shot a man attempting to take his rifle, the Napa DA reported.

A lawsuit accuses a Napa Police officer of unnecessary force in the shooting death of their son last December.

Someone is taking clothing from a recycling bin and setting it on fire.

Letters: The video doesn't show it.

Support the law enforcement, not the law breaker

Napa Police: Officers fire plastic round at teen holding knife to own throat

A different view of the shooting

Letters: Deputy had milliseconds to decide what to do.

One dead in fatal collision in American Canyon

If this state is the nation’s laboratory for progressive laws, why has it been unable to keep the police from policing themselves?

The motorist is reported in critical condition in a local hospital.

This screen capture from a patrol car's dashboard camera shows Brandan Reid Nylander exiting his car while carrying a shotgun, moments before he was fatally shot by a Napa County Sheriff's deputy on April 24.

Brandan Reid Nylander, 24, of Napa shown on security camera footage, provided by the Napa County Sheriff's Office, in the Napa Walmart on Friday. Investigators say he stole ammunition and fled and later was killed in a confrontation with deputies near the Napa County Airport.