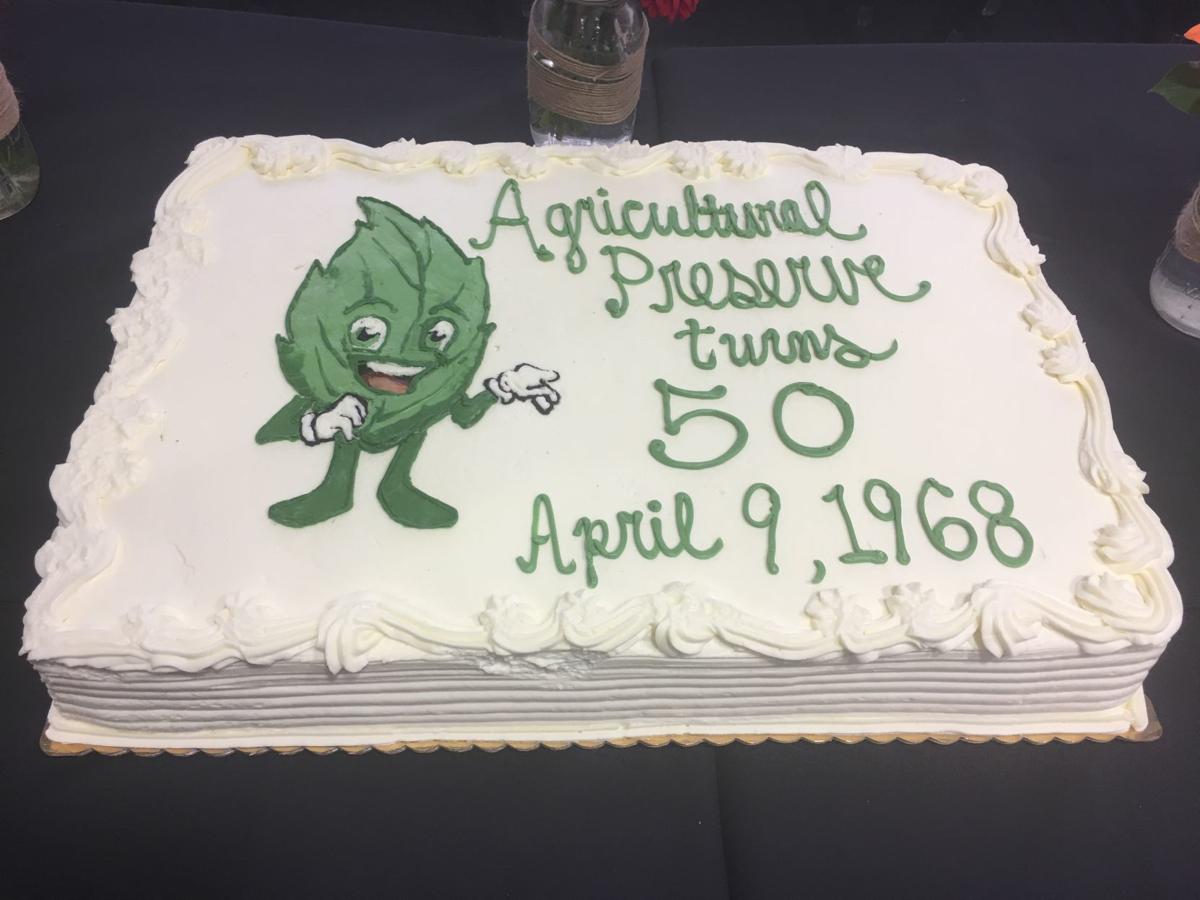 The Napa County Board of Supervisors on Tuesday celebrated the 50th anniversary of the agricultural preserve with a party and a cake. The celebration came a day late to fit the Board's meeting schedule. 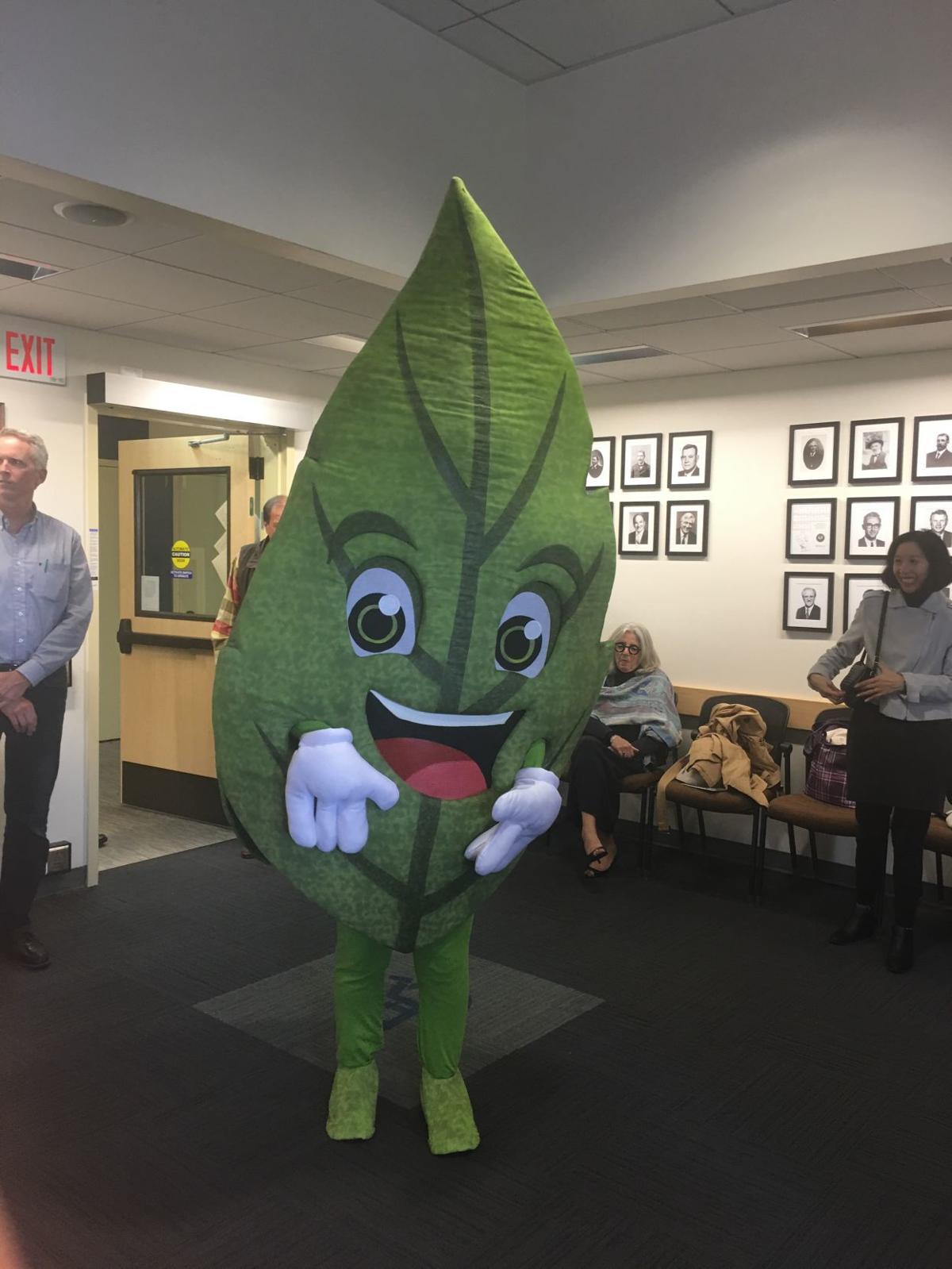 Napa County on Tuesday celebrated the 50th anniversary of the agricultural preserve by holding a party and introducing the new mascot named Preservin' Irvin.

The party came one day late because the Board of Supervisors meets on Tuesdays. But supervisors didn’t want to miss the chance to mark the occasion.

No Napa wines were present in the Board of Supervisors chamber. Instead, the 50 or so attendees toasted the preserve with sparkling cider and calls to action.

“We’re celebrating the first 50 years of the preserve,” Board of Supervisors Chair Brad Wagenknecht said. “The next 50 years are on us. We have to make this work.”

A previous Board of Supervisors on April 9, 1968 created the agricultural preserve zoning district in much of the Napa Valley. The move was designed to keep a wave of ranchettes, subdivisions, shopping centers, industrial parks and other development from swallowing up farmland, as was happening in Santa Clara County.

Sandy Elles, who in 2016 ended a 15-year-stint as executive director of the Napa County Farm Bureau, said the work of preserving agriculture isn’t over. She mentioned the late Volker Eisele as someone who continued fighting for preservation.

“We need the whole community’s support for now and forever, because once it paved over, it’s gone forever, the final harvest,” she told the gathering.

Hugh Davies of Schramsberg Vineyards addressed the gathering. His father, the late Jack Davies, headed a steering committee that in 1968 helped build public support for the agricultural preserve.

Signs marking the agricultural preserve are ready to go up along Highway 29 and Silverado Trail, two at the north end of valley and two at the south end, Davies said. He said, perhaps jokingly, that county officials in the room might help with the necessary county permits.

The county unveiled Preservin’ Irvin, a person wearing the costume of a giant, smiling grape leaf. Preservin’ Irvin walked around the room for photo opportunities with guests.

Some attendees are on different sides in the contest over Measure C. The watershed and oak woodland preservation initiative is on the June 5 ballot. Among other things, it would limit the removal of oaks in the watershed to make way for new vineyards.

Measure C is Napa County’s latest land-use battle. But the agricultural preserve, a controversial undertaking in 1968 that is now universally praised, brought everyone together on this afternoon.

“I think most of us on the Board feel like we are the latest in the relay that keeps the agricultural preserve alive,” Wagenknecht said.

In 1978 Jack Daniels and Winston Wilson launched an innovative wine company with headquarters in St. Helena. Their concept was to provide smal…

The Napa County Farm Bureau Foundation, in conjunction with the Napa County Agricultural Commissioner’s office, will host the 17th Annual Ag Day on March 5 at the Napa Fairgrounds.

The Napa County Board of Supervisors on Tuesday celebrated the 50th anniversary of the agricultural preserve with a party and a cake. The celebration came a day late to fit the Board's meeting schedule.

Napa County on Tuesday celebrated the 50th anniversary of the agricultural preserve by holding a party and introducing the new mascot named Preservin' Irvin.