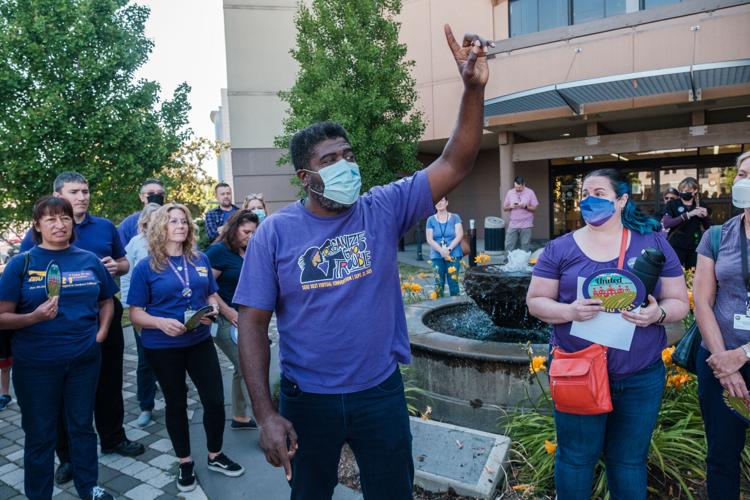 Akbar Bibb, vice president of SEIU Local 1021 region A, addresses other SEIU local union members as they prepare to attend the Board of Supervisors meeting at the County Administration building in Napa on Tuesday. 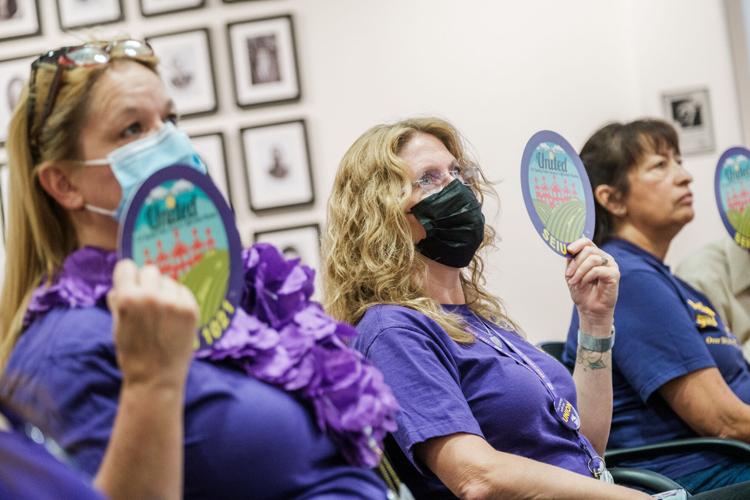 SEIU union members hold signs Tuesday while attending the Board of Supervisors meeting at the Napa County administration building.

Napa County employees wearing purple union shirts came to the Board of Supervisors saying that noncompetitive wages, the housing crunch and a high cost of living have left the county shorthanded.

"Staff up, Napa County" was the call-and-response chant from several dozen employees in the board chamber and adjacent hallway.

Fill the vacant positions, said Service Employees International Union Local 1021, which represents about 985 of the 1,500 county workers. The union estimated about 20% of positions are vacant.

County officials on Tuesday afternoon said the vacancy rate across all county positions is 13.3%, though this varies week-to-week. It was unclear if the county and union were looking at the same cross-section of employees or the same moment in time.

Fiscal matters were front and center for the Board of Supervisors on Tuesday. They passed a $607 million-plus budget for the 2022-23 fiscal year that begins July 1.

But there's one unknown to the new budget. The county is still negotiating with SEIU Local 1021 on a new contract that will impact overall county expenses.

Doing more work with fewer people is unsustainable and the community will suffer most, McClesky told supervisors. The problem is that wages and benefits are noncompetitive, he added.

The Napa Valley Register later asked county Board of Supervisors Chairperson Ryan Gregory for a response to the union's comments.

"We're in the middle of negotiations," Gregory said. "I have faith in the process. It has served us well. We're just not done yet."

He acknowledged the county has staffing issues. But a lot of other places do also, he said.

"The labor pool is really thin," he said, adding it's hard to pinpoint one reason why positions are vacant.

The Board of Supervisors on June 7 gave some employee categories an "equity pay" raise. This step, called for by the current union contract, is designed to keep salaries in line with the median pay of Marin, Santa Cruz, Contra Costa, Solano and Sonoma counties and the city of Napa.

These equity pay adjustments will cost the county $866,000 annually, a county report said.

Del Mallory of SEIU Local 1021 said Alameda, Santa Clara and San Francisco counties need to be part of the equity pay comparison mix for Napa County to retain workers. They pay much more than Napa County.

Equity pay and cost-of-living adjustments are different things. The next union contract, when finished, will include pay raises that are supposed to address inflation.

Napa County will find out later precisely how a new union contract will fit in with the $607 million-plus 2022-23 budget. Of that total, supervisors have most discretion over the $253 million general fund portion.

Fire prevention proved to be a major issue with the budget. Supervisors allotted $5.4 million for a community fuel reduction plan to create fire breaks. But the plan calls for $9.9 million worth of work during the year.

More fuel reduction money could come in August. County staff first wants to find out such things as employee contract costs and an estimated cost to buy Skyline Wilderness Park.

Christopher Thompson of Napa Communities Firewise Foundation said he is grateful for the $5.4 million the county will provide. This will allow work to continue.

The county is providing money in the wake of the failure of Measure L in the June 7 election. Measure L would have created a quarter-cent sales tax to raise an estimated $10 million annually for fire prevention.

Thompson said the foundation will revisit its work plans based on not having Measure L money, but having the $5.4 million from the county. It will continue to emphasize public safety, entry and exit routes, community fuel breaks, and protecting water systems and other infrastructure.

"This is not 'nice to have,' it’s 'must have,' insofar as making our community both safe and livable, and so we will press on," Thompson said.

There’s no money earmarked in the county budget for firefighting aircraft that are exclusive to Napa County. Cal Fire has a water-dropping helicopter based at Napa County Airport and other aircraft in Lake and Sonoma counties. But some residents want more.

These Cal Fire aircraft could be called to fight fires in another part of the state, Howell Mountain vintner Randy Dunn told supervisors last week. It's worth the county spending more than a million dollars to have aircraft that stay in Napa County, he said.

“Losses from the Glass Fire are astronomical,” Dunn said. “I hope that we all agree the entire economy of the Napa Valley cannot survive another event similar to what we’ve seen in the past.”

Angwin resident Mike Hackett voiced a similar position. Angwin is a community that escaped the mega-fires of recent years, but has had close calls.

“If we really want to be as safe as possible in Napa County, we need a full-time rapid response aircraft here,” Hackett told supervisors. “I’m here to lobby that into the budget.”

Check out highlights from this year's graduation season.

Check out scenes from the Justin-Siena High School graduation.

NVC students who endured a pandemic, months of remote learning, and other challenges received their diplomas Thursday night at Memorial Stadium.

Napa's New Tech high school seniors took to the field for the 2022 high school graduation. Recognize anyone you know?

The St. Helena High School Class of 2022 expressed its gratitude to families, school staff and the community during graduation on Friday, June…

Work is to begin on the Soscol Junction project at Highway 29 and Highway 221/Soscol Ferry Road on July 11.

A woman was arrested after Napa Police said she threatened officers during a traffic stop.

A lawsuit settlement means Lake Marie reservoir in Skyline Wilderness Park will  provide water for trout downstream of the dam.

The Napa County grand jury agrees with the county's decision to close a possible Angwin evacuation route, but questioned the county's public outreach.

Two key downtown Napa redevelopments are both racing towards the finish line, with new commercial tenants expected to debut in the coming weeks and months.

Motorcyclist seriously injured after collision on Highway 29 in Yountville

A motorcyclist from Santa Rosa sustained major injuries in a predawn collision with another vehicle at Highway 29 and Madison Street, CHP reported.

Juneteenth, the holiday commemorating the end of slavery in the U.S., on Sunday found its largest showcase yet in Napa County.

Watch Now: Disney caught in the middle of political firestorm over Florida law

Akbar Bibb, vice president of SEIU Local 1021 region A, addresses other SEIU local union members as they prepare to attend the Board of Supervisors meeting at the County Administration building in Napa on Tuesday.

SEIU union members hold signs Tuesday while attending the Board of Supervisors meeting at the Napa County administration building.